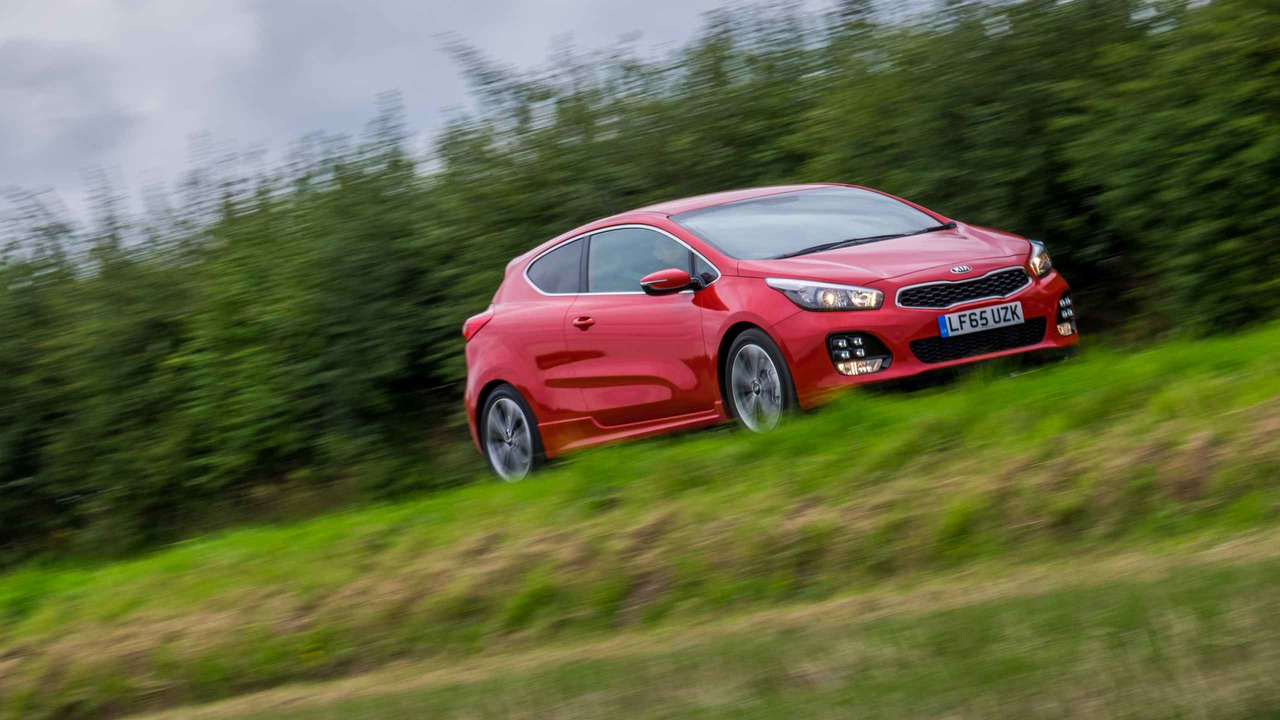 It's not the car of your dreams, but it'll leave you satisfied.

The Kia Pro Ceed is many things – it’s a three-door hatchback that likes to think it’s a coupe, and it has some of the most torturous punctuation and syntax of any mainstream car name (Kia actually stylises it "pro_cee'd"). It’s also smart to look at, decent to drive, well-made and well-priced, so for all its odd name and coupe delusions of grandeur, it’s certainly worth a look.

Did you know? The Pro Ceed’s name comes from the fact that the Ceed was the first car Kia built in the EU (or EEC as was) and ED for European Design.

It’s no hot hatch, the Pro Ceed (not even the 201hp GT, which nevertheless has a good go at being one), but it is a decent hatchback, with attractively sporty lines and not at all bad handling and ride. Being a Kia, it’s also well built, tolerably refined, just about practical enough, and comes with the allure of a lengthy standard warranty. Not a car about which to dream, perhaps, but certainly a car that will be satisfying to own.

It is a three-door version of the standard Kia Ceed, so perhaps the fact that the Pro Ceed has relatively plain styling should come as no surprise. It’s certainly not ugly, but it lacks the subtle classiness of a Volkswagen Golf or Peugeot 308, and it’s not as outright pretty as the Alfa Romeo Giulietta. Nonetheless, you could just about argue that, with its fast-rising beltline and tightly proportioned rear end, the Pro Ceed makes sufficient effort to be closer to a coupe than a mere three-door hatchback model. The GT-Line spec model does help, as it gets a chunky, muscular body kit that really lifts the looks, and those four-point LED running light pods give it a faint frisson of rally car glamour.

Kia’s image is, of course, that of a provider of sensible, budget-priced family cars so it’s not a vehicle that will win you much in the way of car park kudos, although that may well be set to change a little with the introduction of the Stinger GT sports saloon at the top of Kia’s range. Could a little reflected glory make the Pro Ceed that touch more desirable? Ask us again in a couple of years…

The cabin is lifted directly from the Ceed hatchback, albeit with the slightly more intimate effect brought about by the lower roofline. Taking the interior from the standard hatch means that you get a lot of good stuff – comfortable, supportive seats, neat, clear main dials, decent build quality and reasonable (for a three-door) space. It does also mean that you’re driving around in a vehicle that’s supposed to be a glamorous coupe and you’ve got the cabin from an affordable family car. That the Ceed’s cabin is perfectly functional is a good thing, but it does detract from the desirability just a touch. The exception is the leather-bound, multi-function steering wheel that seems to have been parachuted in from a much more expensive car.

Thanks to reclining rear seats, the boot volume can be slightly expanded from a minimum of 362 litres to 380 litres, and if you fold the back seats flat that expands to a useful 1,225 litres, but the slightly narrow hatchback aperture means that you’re still a bit limited in what can be loaded in. Rear seat space is fine, very fractionally reduced from the five-door hatchback, but the swept-up window line means that it can be quite claustrophobic for small children back there, even if they will be safe on their two ISOFIX seat mounts.

Considering how well-priced the Pro Ceed is, its list of connectivity and tech equipment is especially impressive. All models come with a DAB radio, a seven-inch touchscreen with USB and Bluetooth, Apple CarPlay and Android Auto, satellite navigation, and the ability to create a Wi-Fi hotspot for your phone. That phone connection also allows the Pro Ceed to offer live services, including traffic, weather, local information searches, and speed camera warnings.

The main instruments incorporate a large display screen for the trip computer and vehicle information, plus it can show satnav instructions and eco-driving tips. GT models also get a seven-inch all-digital instrument display, which can show various sporting functions including torque and turbo boost readouts.

While you’d never describe the Pro Ceed as being as much fun as a Ford Focus, nor a Volkswagen Golf, nor a Peugeot 308, there is an undeniable appeal to the way it drives. That starts with the steering, which comes with Kia’s ‘Flex Steer’ system that allows you to choose from Comfort, Normal and Sport modes. Now, generally speaking, those translate as Mushy, Less Mushy and Only A Little Mushy, but in Only A Little Mushy mode, it’s not that bad – there's decent weight and response, even if there’s a total absence of feedback. The chassis is also well balanced, striding a well-chosen line between too firm and too soft, and while it’s certainly not a handling champ, the Pro Ceed is engaging enough to throw about, and even keen drivers won’t feel too short-changed.

The GT model, with its 201hp turbocharged 1.6-litre petrol engine, certainly has a fleet turn of speed, but its chassis and steering haven’t been worked on sufficiently so it’s a long, long way short of the benchmark Volkswagen Golf GTI in dynamic terms. While the standard Pro Ceed is a pleasant surprise, the GT is something of a disappointment.

Of the standard car’s engine line-up, the 1.0-litre T-GDI three-cylinder petrol turbo is the standout model. No, with 120hp and 171Nm of torque, it’s not the most electrifying engine around (0-62mph takes a leisurely 10.7 seconds), but it’s eager, rev-happy, and has a pleasing snarling noise when you run it out to the redline. It’s one of those cars in which you can have fun without bending nor breaking the road traffic laws, which is always a good thing. There is a 1.6 GDI non-turbo petrol too, but it’s a touch disappointing compared to the 1.0-litre.

Diesel options are limited to one – the familiar 136hp 1.6 CRDi unit, but that’s fine as it’s a good engine. It’s a touch noisy compared to the latest generations of Peugeot’s 1.6 BlueHDi or Volkswagen’s TDI range, but it has more power than either, as much as 300Nm of torque for the top-spec model, and excellent mid-range punch. A good choice for those covering sufficient mileage and a better all-rounder than the petrol GT.

The Pro Ceed itself has not been tested by Euro NCAP, but the standard Ceed has and that scored a five-star rating, with an 89 per cent score for adult occupant protection, 88 per cent for child occupant, 61 per cent for pedestrian protection, and 86 per cent for safety assist.

While the Pro Ceed does come with electronic stability control, six airbags, emergency hazard braking lights, hill-holder clutch, and a tyre pressure warning system, more modern collision prevention systems are not yet available. The GT-Line S trim does come with a lane-departure warning system, and active high-beam headlights, but these are not available on the rest of the Pro Ceed range.

There is one solid paint option for the Pro Ceed, Track Red. The rest of the paint finishes are metallic and include Fusion White, Phantom Black, Dark Gun Metal, and Yellow Flame.

The Pro Ceed is a compact vehicle, so shouldn’t present any dimensional issues, but be careful when reversing as over-the-shoulder visibility isn’t great.

The Pro Ceed is certainly going to be an affordable car to run. The 1.0 T-GDI petrol engine has official fuel economy of 45.6mpg and CO2 emissions of 115g/km. The 1.6 GDI non-turbo engine returns 41.5mpg and 124g/km of CO2 and only the 210hp turbo GT engine counts as thirsty, with 29.1mpg and 170g/km – rather disappointing compared to the Golf GTI.

The 1.6 CRDi diesel is very economical, with fuel economy ranging from a high of 67.3mpg for a manual model, to a low of 64.2mpg when fitted with the optional seven-speed dual-clutch automatic transmission. Emissions range from a low of 99g/km to a still-low-really 'high' of 103g/km, depending on which alloy wheels you choose.

The Pro Ceed has never been recalled and generally speaking Kia makes solidly reliable cars, backed up by a now-famous seven-year warranty. On top of the seven-year mechanical warranty there’s a five-year paint warranty and a 12-year anti-perforation warranty. Kia also offers pre-paid servicing plans for three or five years, including a first MOT guarantee.

Not least given how well equipped it is, the Pro Ceed is very well priced indeed, with the ‘2’ model kicking off from just under £18,000 powered by the 1.6-litre petrol engine. The 1.6 diesel engine, in the same trim, will cost around £19,000, but if you want the 1.0-litre T-GDI engine, then you’ll have to upgrade to a GT-Line model, which will also cost around £19,000. Somewhat surprisingly, the GT model isn’t the range topper – it’s actually a few hundred pounds cheaper than the 1.6 CRDi diesel in GT-Line S trim with the seven-speed DCT automatic gearbox.