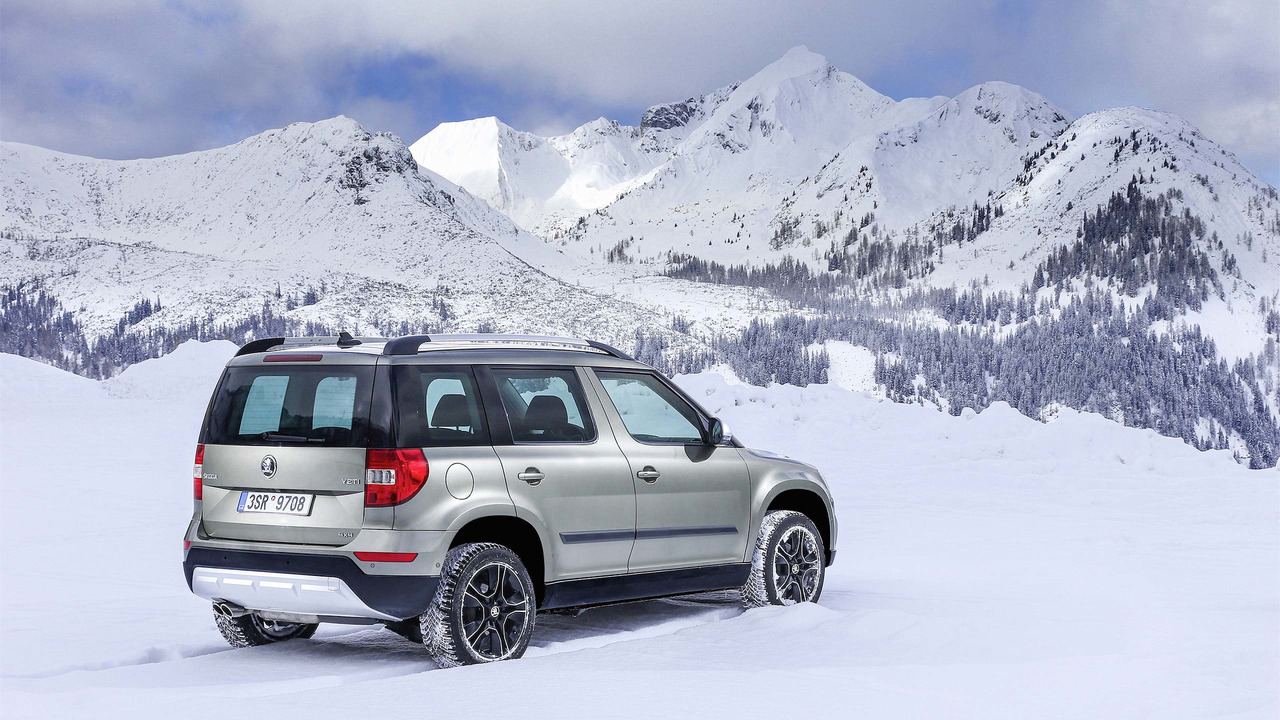 Simplicity and familiarity - Not exactly the abominable snowman.

The Yeti is Skoda’s small SUV. It’s designed to fall somewhere between more traditional off-road styling and the high-riding hatchback-like crossovers that inhabit the same space in the market. The Yeti is hugely popular, not just for the way it looks and how easy it is to engage with, but also the way it drives, being among the most fun of any car of its type. Four-wheel drive is available only with the most powerful diesel engine option.

Did you know? The 2005 Yeti concept hid its rear door handles vertically within the door frame to try to ape the old-school three-door off-roader look

There are two distinct points in the Skoda Yeti’s favour. The first is the simplicity and familiarity of its controls. It’s so quick and easy to get in, get comfortable and get acquainted with the layout, especially for people who have already owned a Volkswagen Group car. The second point is that the Yeti really does offer more fun than most other small SUVs. It’s better through corners, feels nimbler and has a hint of youth about it. It might lack the extreme styling flourishes of some newer designs, but its straight-lined, uncomplicated design still looks neat.

The Yeti was one of the earliest models to be given the current ‘family styling’, but it’s the interpretation that perhaps works least well across the range because, here, the update ended at the nose. Otherwise the look is of clean, calm simplicity and a sense of compact get-up-and-go. Some might think the Yeti looks a touch anodyne next to more modern rivals with their swoops and slashes, but those rivals might date while the Yeti remains quite ageless.The pre-facelift version's face gave the Yeti more of its own identity, it must be said.

Skoda’s image, transferred across to the Yeti, is one of value, practicality and surprising over-achievement, and that stands it in good stead.

As a functional space the Yeti’s interior is fine. It’s simple, well laid-out and easy to navigate around. The minor issue is that it’s somewhat short of character. At a glance it could be the interior of an Octavia, a Fabia or even a high-end Rapid. There’s nothing to give it a flavour of an off-road or SUV lifestyle, nothing to lift it from the mainstream.

That said, all the controls are within easy reach, are intuitively designed and never throw up any reason to read the manual. The seats do an adequate job of supporting your legs and back, although you might find that base and mid-range models could do with more lumbar support.

Inside the Yeti, at SE Technology trim and up, there’s a flexible seating arrangement where the 40:20:40 split rear seats allow multiple configurations. The middle seat can fold down to offer a pair of armrests and two cupholders, with a third cupholder suited to thinner containers. The seats can be moved forward or back independently to increase passenger legroom or boot space, and they can even be removed altogether – a feature that’s becoming quite rare.

Another practical touch is two pairs of hooks on rails, with one pair either side of the boot. They are extremely useful for preventing shopping bags from sliding around – or any other bags, for that matter.

On the options list are potentially very useful gadgets and add-ons such as heated windscreen washer nozzles, a removable tow bar, mud flaps, a net partition for behind the back seats, underbody protection panels for rough off-roading and a variable boot floor, which comes with nets, too.

Bluetooth, a touchscreen infotainment interface and air conditioning are standard on all Yetis. The infotainment system is a bit simplistic next to those in plenty of rival cars, but it does the job.

SE adds useful stuff such as rear parking sensors, dual-zone climate control and cruise control. SE Drive then adds satellite navigation, front parking sensors and a heated windscreen, giving it all the tools to be a superb all-year-round family car. No more waiting 10 minutes for your windscreen to demist, and no chance of getting lost on holidays. Buyers can just add sat-nav on its own, if they like.

Further up the range there are bi-xenon headlights, heated front seats, automatic parking functions and a host of options for extra tech.

There’s no other mainstream compact SUV that’s more fun to drive than the Yeti. Body roll is well controlled, it turns with accuracy and a rigidity of the chassis that’s often missing from other cars like this. Altogether it feels cohesive and surprisingly agile, but you pay the price for this in the firm ride. This is now even firmer than in the original version of the Yeti, chipping away at some of the former comfort.

The engines, all turbocharged, are familiar Volkswagen Group fare. There's only one petrol engine now, a four-cylinder, 110hp, 1.2-litre unit; the 1.4 has disappeared from the range, and the feisty 1.8 is long gone. Diesels, both of 2.0 litres, have either 110 or 150hp. All are smooth and relatively efficient, but the 1.2 feels more strained at higher speeds where it often has to be worked to its maximum. The 150hp engine, available only with four-wheel drive, gives good performance while the 110hp is lively enough for most needs. The little 1.2-litre petrol engine is harder work on motorways; it copes, but is better suited to quietly doing its thing in town and cruising gently on the open road.

It should go without saying that the Yeti gives a good view of the road ahead, potentially giving a driver more time to see and react to a hazard than in a lower car. Only the expensive Laurin & Klement range-topper comes with the ability to autonomously apply the brakes if it thinks the car is in danger of driving into something, but the rest have a standard array of braking and stability aids to ensure stopping in almost all weathers.

The five-star rating from Euro NCAP should offer some reassurance to parents that the Yeti is a safe place to put their children. It scored 92 per cent for adult protection and 79 per cent for child protection, but its bonnet is at just the wrong height for the pedestrian safety test and as a result the Yeti scored just 46 per cent.

Many manufacturers seem to be drifting away from white as a free colour choice. Solid Pacific Blue is the Yeti’s free paint shade. Traditional Skoda Corrida Red, which the company has used ever since the first post-VW takeover Octavia, is a £195 option alongside the also-flat Candy White. The white is best avoided as it makes the Yeti look unfairly utilitarian.

Among the £555 metallic and pearlescent colours are Petrol Blue, Black Magic, Business Grey, Moon White, Cappucini Beige – like the flat white, this one is best avoided, Brilliant Silver, Quartz Grey and Jungle Green. Petrol Blue looks good in the metal, as do Quartz Grey and Corrida Red.

The spine of the range shares the same names Skoda uses elsewhere, starting with S, SE and SE L before reaching Laurin & Klement. It’s a traditional structure that gains equipment as it climbs the ladder. Cheaper trims are denied access to the more powerful engines just as the top grades can’t be paired with the entry-level engines.

There are also extra versions of SE and SE L spec, called Drive, that add practical features like sat-nav and front and rear parking sensors. Not only that, but there’s also an SE Technology version that adds sat-nav and minor extra features throughout. It seems like poor value next to the SE Drive, though.

The two most important men in Skoda’s early days were Vaclav Laurin and Vaclav Klement. They had been making bicycles and velocipedes, but eventually turned to cars. Their vision was of the most luxurious cars in the world, and for a brief time the dream came true after they joined forces with a certain Mr Skoda in the 1920s. The latter kept his name on the products because he had the greater power and influence at the time.

But Laurin and Klement are remembered with what is always Skoda’s highest trim level, with the most luxurious interiors and the widest range of equipment. It's a fitting tribute to the engineering minds behind the brand’s origins making cars.

It’s not especially wide and stays short enough to feel compact on the road. While it’s higher than a normal hatchback, a height of less than 1.7 metres for all models won’t cause any problems either at home or in public car parks. The 2.0-litre diesel models are 20mm taller.

There are no real problems or shortfalls with respect to the Yeti’s fuel economy, with the caveat that the 1.2 TSI quickly drops its efficiency numbers to disappointing levels when asked to cope with winding or hilly 60mph country roads or a high-speed motorway cruise.

Unusually, there’s no 1.6-litre diesel here. A lower-powered version of the 2.0-litre has taken its place and offers a real-world 50mpg or so if there are a few longer trips thrown in. That’s good enough to satisfy owners but it’s possible to buy better fuel economy among the Yeti’s rivals.

The Yeti’s running costs shouldn’t cause any surprises. The four-wheel drive versions are more expensive to run thanks to reduced fuel economy and greater maintenance needs in the servicing schedule.

Skoda has fixed its servicing costs, making it easy to see what you’ll pay and for what work. It’s the same price across models, too, which looks great if you have a £30,000 Superb but less rosy for owners of a £9,000 Citigo. The Yeti has so far been reliable, except for its share of VW Group-wide issues with early 1.2-litre TSI petrol engines.

For the most popular models the Yeti is fairly priced. Between S and SE L trim the prices for the cheapest petrol and diesel models seem reasonable, but they aren’t persuasive in their own right. The range starts at £17,610, with SE adding £1550 to S and SE L spooning another £1830 onto the bill. SE Drive starts from £20,095, or £21,440 with the 110hp diesel.

Laurin & Klement spec is the most expensive model by quite a margin, topping out at £27,945 for the 150hp diesel with four-wheel drive and the DSG automatic gearbox. That, for reference, is about the same as a four-wheel drive Skoda Kodiaq SE Technology, a much bigger car.