Jaguar's first SUV has been a long time coming but it's been worth the wait if you're after slick handling and refined looks in a 4x4 package.

Given the global rush for SUVs and crossovers it was as inevitable as the changing of the tides that eventually, Jaguar was going to have to offer one for sale. Jag has heavily tapped the expertise of its sister company Land Rover for help in creating the F-Pace, and the result is a quick, capable crossover that looks good, is hugely practical and good to drive.

Did you know? The F-Pace name comes from a Jaguar advertising slogan from the 1950s – Grace, Pace, Space.

It shouldn’t really be a surprise, given Land Rover’s involvement and Jaguar’s generally good record of late, but for a first-ever SUV from a company better known for sports cars and saloons, the F-Pace is an exceptionally good effort. We have some reservations over the interior and some of the dynamic performance, but overall the F-Pace has been a job well done for Jaguar, and its strong sales are a good reflection of the effort that’s gone into making it. 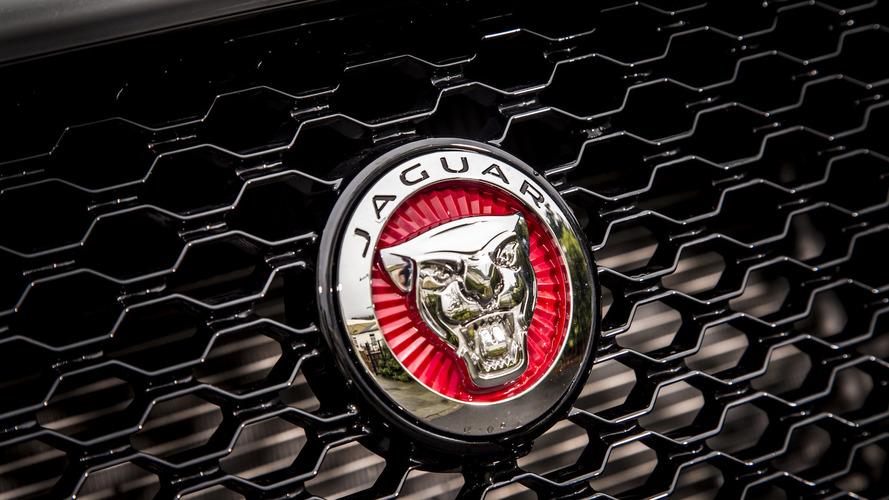 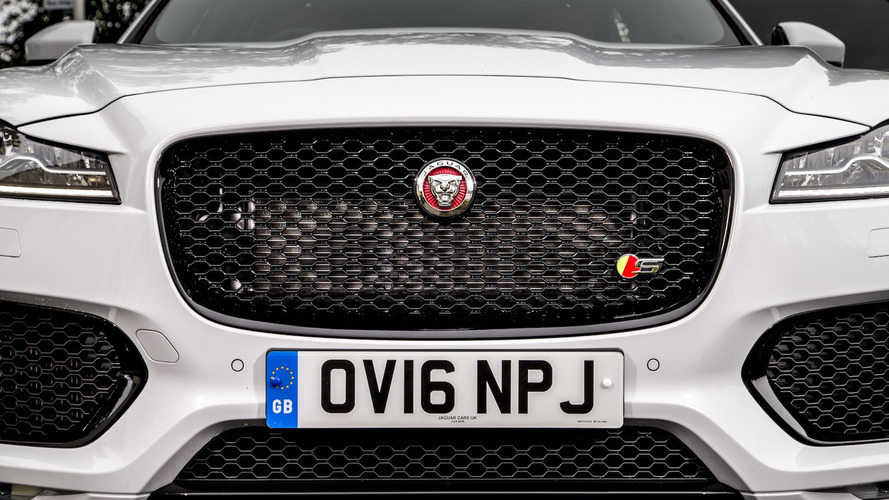 There’s no doubting that Ian Callum (Jaguar’s superstar chief designer) and his team have done a roundly excellent job here. The F-Pace takes all of Jaguar’s current design cues – narrow headlights and taillights, that gaping grille with its overtones of fighter jets from the 1950s – and hauls them upward to work in a taller, more practical shape. There are very few lines on the F-Pace with which you could quibble, and fewer still angles from which it looks anything less than very handsome. It is a touch colour sensitive though, looking a little lost in the usual silvers and blacks, but better by far in a strong blue or green, or a nice dark metallic gunmetal. 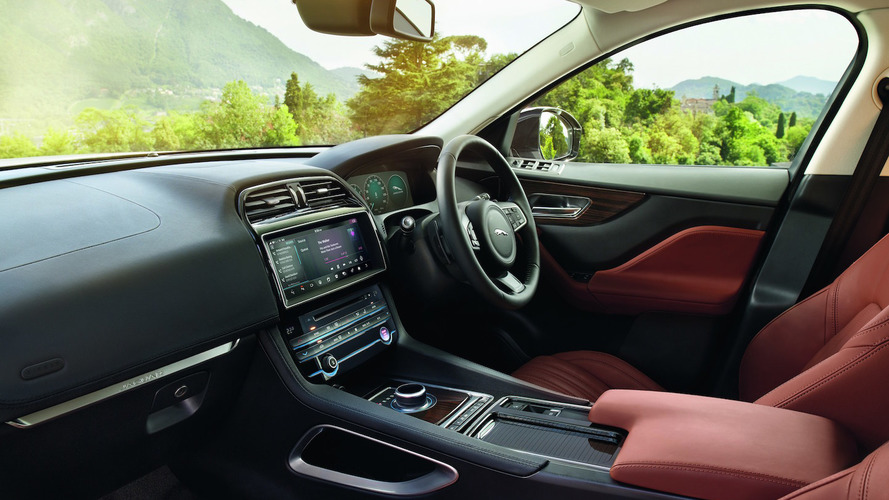 While Jaguar’s exterior design team have been knocking things for six, the cabin team have been rather less successful. It’s rather like comparing the England cricket team under Michael Vaughan with that under Michael Atherton. One plays a strong game, the other faints every time Shane Warne comes into sight.

The cabin of the F-Pace shares a great deal with that of the XF and the XE, and that’s both good and bad. On the good side, there are excellent seats that are both supportive when having a brisk drive in the country, and comfortable when taking a longer spin on the motorway. Overall quality and build is fine, too, if quite a way off the benchmark set by the Audi Q5, and the BMW X3 and Volvo XC60 also better the F-Pace for perceived material quality, and general fit and finish.

It just all looks a bit too plain is the problem. Unless you spec your car with the optional 10-inch infotainment screen and the all-digital instrument pack, the main interfaces look really old-fashioned and, even when you do spec things up, the shapes and design just look a bit bland. Certainly, the F-Pace’s interior is well behind that of the Mercedes GLC and Audi Q5 in design terms.

It does punch back hard in the practicality stakes, though. There is very good legroom in the back seats, and two ISOFIX points for child car seats in the outer two perches. Better still, that rear bench is just about wide enough to get a third child seat mounted using the seatbelt in the middle. The seats also split 40:20:40 and the boot, if you forego either a space-saver or full-size spare wheel, holds a hugely impressive 650 litres (508 litres with a space-saver, or a disappointing 463 litres with a full-size spare). The parcel shelf stows away underneath when not needed and that boot floor is reversible, with a rugged rubber mat on one side for taking wet swimming gear or muddy hiking boots, for example. A powered tailgate with gesture control is available as an option. It may be a performance SUV with strong driver appeal, but the F-Pace is really practical and family-friendly too. 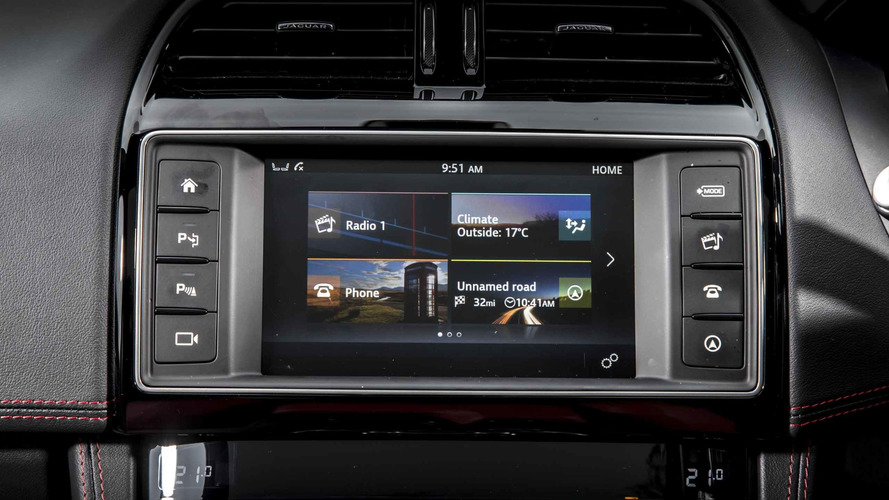 There are some very impressive connectivity and tech options for the F-Pace, but the operative word here is 'options'… A base F-Pace is actually pretty disappointing in this regard, with only the older eight-inch InControl Touch touchscreen as standard, along with DAB radio, Bluetooth, satnav, and a Wi-Fi hotspot. You have to upgrade or pay extra to get the much more impressive 10-inch InControl Touch Pro system, or the 12.3-inch all-digital instrument display, while the 380-watt Meridian sound system is also extra. A head-up display is available as an option on all models, as is the clever ‘Activity Key’ – a waterproof wristband that allows you to lock and unlock the car when the keys are stowed safely inside.

It is worth adding that 10-inch system, despite it being a fairly pricey addition, since the interface is a bit more streamlined and responsive. Even so, the systems you enjoy in an Audi or BMW are more advanced generally, and are better for user-friendliness and graphics quality. 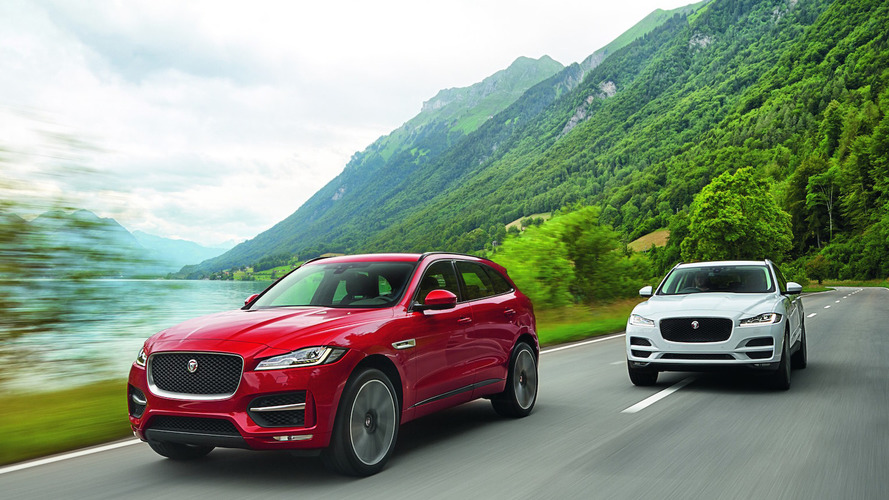 If the F-Pace isn’t quite up to the handling and dynamic level of the Porsche Macan, then it’s certainly not too far off the, erm, 'pace' and that starts with the steering. Even over and above BMW, Jaguar is the current master of perfecting weight and feedback with an electrically-assisted power steering system, and the F-Pace benefits from the work already carried out for the XF and XE. The steering feels great, and tells you enough about what’s happening under the front wheels to inspire great confidence.

That confidence is further enhanced by fitting the F-Pace with four-wheel drive (rather than the rear-wheel drive of some cheaper models), which doesn’t turn it into an off-roader, but does definitely enhance traction in difficult conditions. Gravel tracks become enormous fun… The chassis’ control of roll and pitch is also exceptionally good. The only weak link is the brakes. On a basic four-cylinder F-Pace, they’re fine, but the heavier V6-engined versions can make them work too hard if you're using all the performance, and a long run down a steep hill will have them feeling rather too spongy for comfort.

The basic 2.0-litre Ingenium four-cylinder diesel engine is a good unit, but as with other cars in the Jaguar and Land Rover families, it’s a touch too noisy for its own good. Still, the 161bhp version posts some impressive economy and emissions figures while the 178bhp model has enough oomph to make the F-Pace’s chassis come alive. Better still, Jaguar also has a twin-turbo 236bhp version of that engine, which rather renders the more expensive V6 diesel redundant.

The V6 petrol engine is most certainly not redundant – lifted from the F-Type sports car and packing 380hp, it arrives with a symphony of snarls and some serious performance credentials, even if it is rather too thirsty. Those seeking a non-diesel middle ground should look at the new 2.0-litre turbocharged petrol with 248bhp. 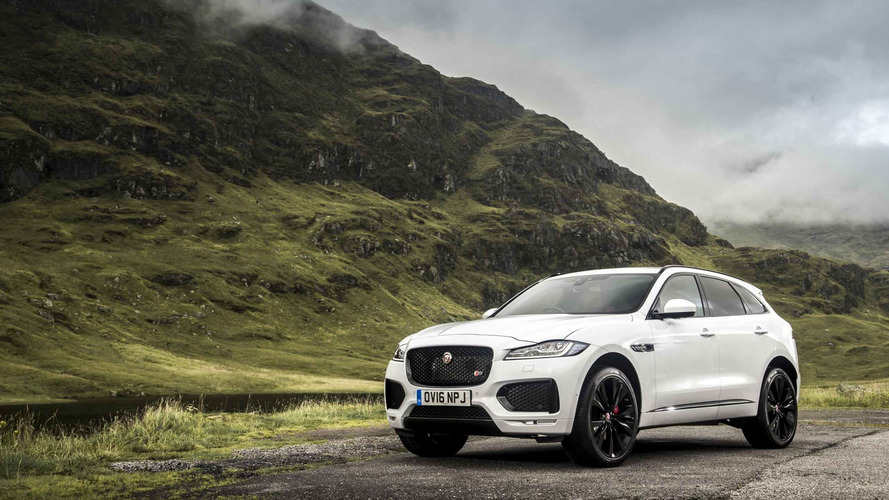 The F-Pace hasn’t yet been tested by Euro NCAP, but the XF with which it shares much of its structure is a full five-star car with an impressive 92 per cent adult occupant rating, so it’s more than likely that the F-Pace will be a strong performer when it is tested.

There are also some impressive active safety systems to help keep you safe. The F-Pace can be had with All Surface Progress Control (which can get you moving, fuss-free, on very slippery surfaces), plus it can be had with Active Surface Response, which reads and recognises the surface underneath and tweaks the electronic systems to best deliver the power safely and smoothly. Jaguar’s Intelligent Driveline Dynamics also attempts to use various sensors to predict when wheel spin will occur and step in to stop it before it starts. Torque vectoring, which shunts engine power to the wheels best able to handle it, is another boon to safety and stability (and, in fairness, performance). There’s electronic stability control that also recognises when you’re towing and acts accordingly, a head-up display, traffic sign recognition, active cruise control with traffic jam assistant, autonomous emergency braking with pedestrian detection, lane departure warning with active steering and driver alertness monitor, blind spot monitor, active parking assistant, surround camera system, and an intelligent speed limiter. Not all of these are standard, but they are impressive. 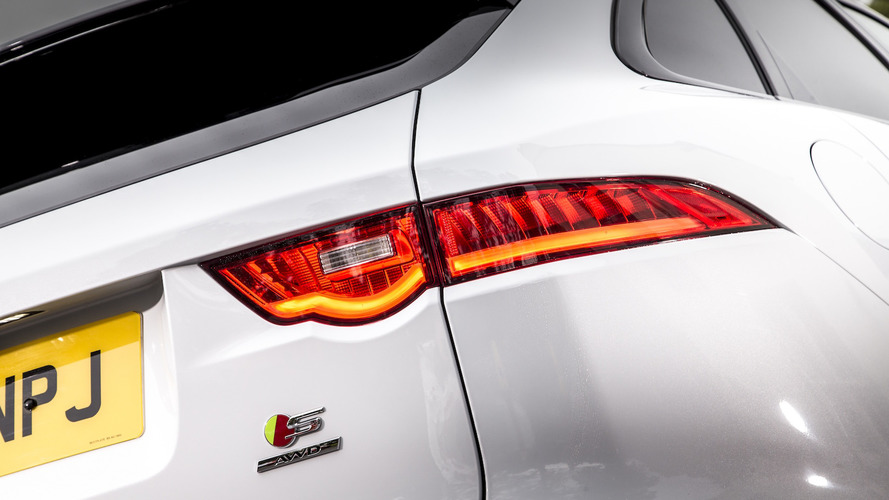 Although not enormously long, the F-Pace is very wide, which can be occasionally awkward in town and on width-restricted roads. 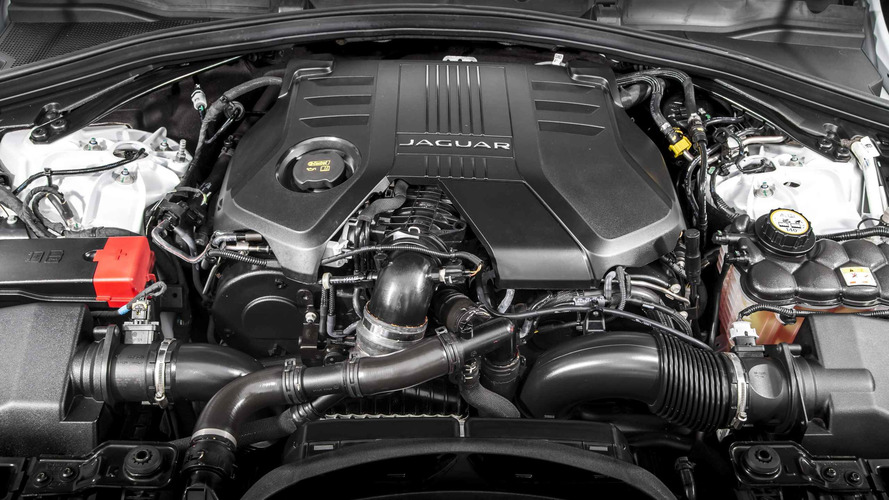 If you get the most basic 164hp rear-wheel-drive F-Pace, then you’re looking at reasonable fuel economy of 57.9mpg (official) and CO2 emissions of 129g/km (you can tweak those figures up slightly to 59.2mpg and 126g/km by fitting special low-rolling resistance tyres). However, performance for that model just isn’t in keeping with the car’s image, so you’re going to want at least the 180hp diesel (55.4mpg and 134g/km in rear-drive form, or 54.3mpg and 134g/km with all-wheel drive) or, better still, the twin-turbo 240hp engine, which returns 48.7mpg and 153g/km with all-wheel drive as standard. The big V6 diesel is actually pretty impressive, relatively, with 47.1mpg and 159g/km.

The two petrol options are diametrically opposed. The 2.0-litre 250hp turbo engine has surprisingly good figures of 38.2mpg and 170g/km, but the 380hp supercharged V6 makes you pay for all that performance and noise with 31.7mpg and 209g/km.

It’s worth bearing in mind that we’ve yet to drive an F-Pace that gets anywhere near it’s official consumption figures in real-world driving, with around 40mpg a more realistic target for the diesels.

The 3.0-litre V6 diesel F-Pace has been recalled for a potential fire risk, but aside from that the car seems to be sticking to Jaguar’s recent good performance in reliability and build quality, and the brand is a regular top-performer in the JD Power quality and reliability surveys. All models come with a three-year warranty that can be optionally extended. There are also integrated servicing plans that allow you to pre-pay for up to five years. 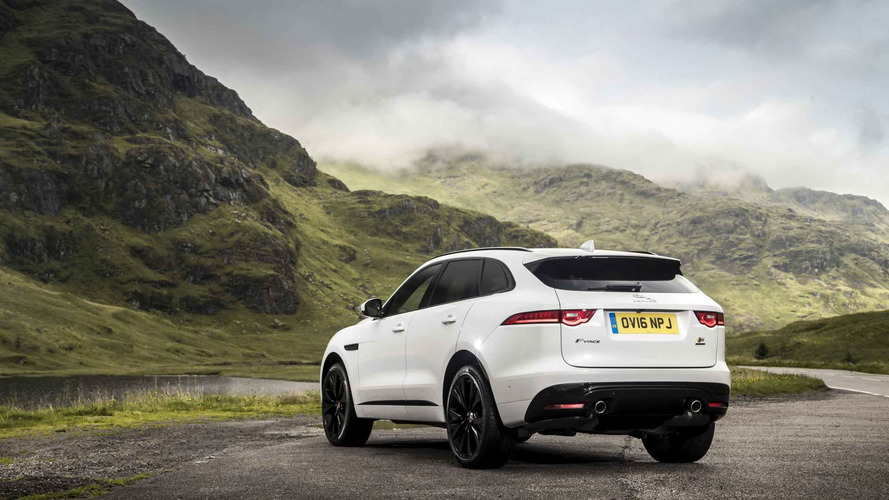 The F-Pace comes in with what looks like a strong offering, of just over £34,000 for the basic model. A sexy Jag SUV for that kind of money? Too good to be true, surely? Well, yes actually. A bit. You see that basic car is very basic and if you want an F-Pace to live up to its looks and billing as a fast, all-terrain luxury family car you’re going to have to spend quite a lot extra to get the sort of interior fixtures and fittings and the powertrain that you need. You’ll need almost £40,000 for a second-level Portfolio model, while the cheapest-possible all-wheel-drive model is north of £37,000. The desirable twin-turbo diesel doesn’t get started until after £42,000 has passed and an R-Sport model with the desirable 180hp diesel, automatic and all-wheel drive will set you back more than £41,000. These prices aren’t out of line with the German competition, but we had been used, in the past, to Jaguar offering rather better value. Don’t forget, also, that the options list can balloon those prices quite dramatically, so it’s very easy to spend north of £60,000 on an F-Pace without going anywhere near the range-topping engines.