An automotive icon, 20 years on.

As the world’s first mass-produced full hybrid car the Toyota Prius is a true automotive legend; a game-changer like few others that sparked a quiet and embarrassing U-turn by countless car makers that said hybrids would never catch on. This is the third all-new version of the popular but divisive Toyota, and it’s the most advanced yet by a country mile.

The innovative Toyota Prius continues to be the archetypal hybrid car. These days, it’s more odd-looking than ever, which divides opinion a little, but there’s no questioning the sheer efficiency of the hybrid technology within. Indeed, with this latest one, Toyota has ramped up the onboard technology to match, making it a truly advanced family-sized hybrid, one that delivers excellent fuel economy and ultra-low emissions, albeit at the slight expense of performance and driver engagement. No matter; that’s not what this car is about. Delivering highly usable hybrid technology at a real world price is, and on that front, Toyota has scored a bullseye. 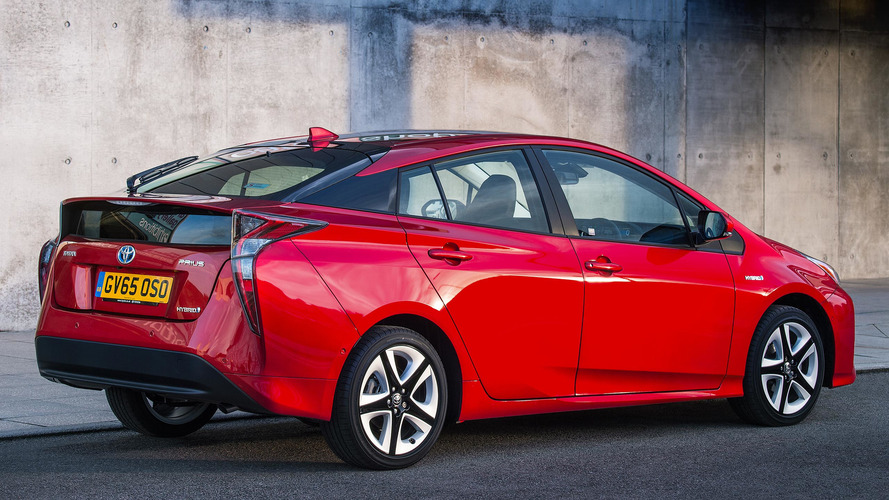 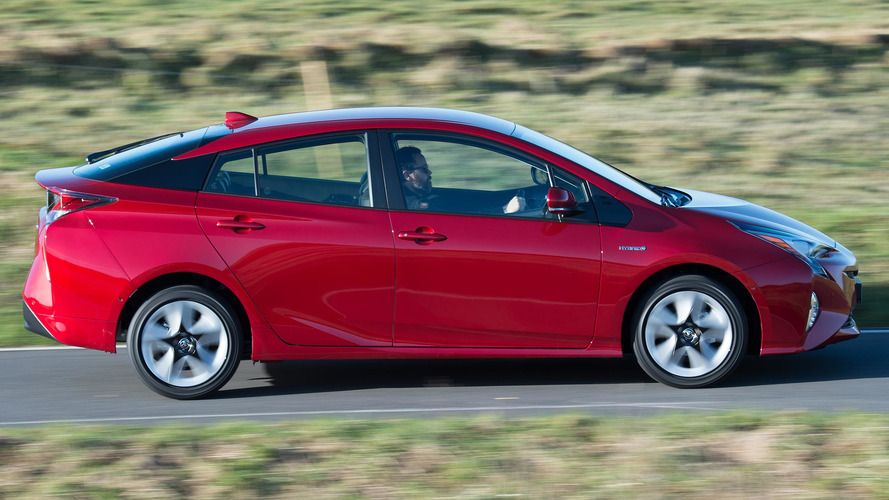 Toyota has subscribed to a particular school of design in recent years, making its models more and more outlandish. It certainly makes them different, whether it appeals to everyone or not, but the Prius is defined by its need to be aerodynamic before stylish. That means a roof line specifically designed to flow as smoothly through the air as possible while still allowing rear passengers decent space.

It’s taller than you might expect above the front seats and it’s narrower than some superminis, so it can look quite awkward; tall and gangly, like that one friend we all had who was six feet tall by the age of 14 and could barely move without bashing into something, dropping something or tripping over themselves.

Small wheels make the impression worse, doing nothing for the Prius in the fashion stakes and reinforcing its image as a car designed for people who wouldn’t know style if it hit them over the head, but who really do care about being seen as environmentally conscious. The Prius, which has emerged as its own sub-brand, fits that brief better than almost any other car in existence. 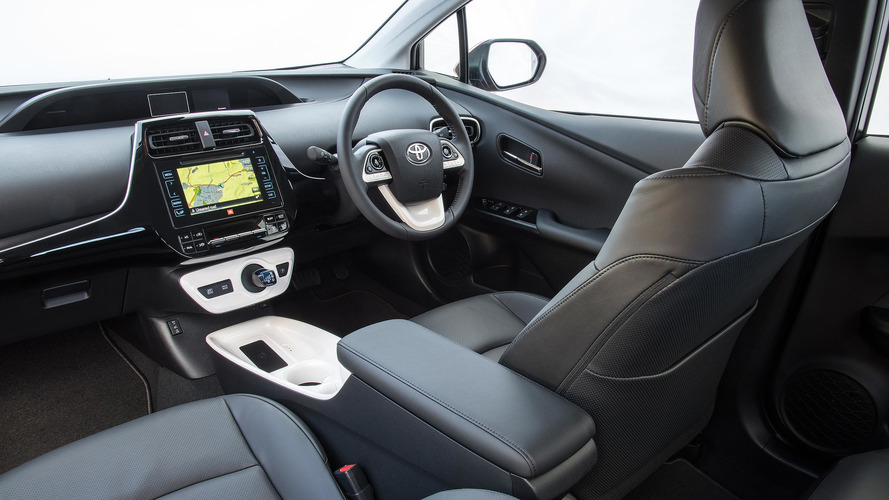 For such a technologically complex car, the interior is surprisingly clean and streamlined. It would be easy to imagine an array of buttons and screens that would make the controls of the Starship Enterprise look simple, but there are just eight old-fashioned buttons on the centre console along with with four two-way rocker buttons for the temperature and air flow. Other buttons are kept to small clusters on the steering wheel and door armrest.

Toyota hasn’t fallen into the same trap as Peugeot has, in integrating even the climate control into the digital screen. The Prius demonstrates the best of both worlds, making it easy to change the climate control settings on the move but condensing most of the other functions into an intuitive touch-screen. The white trim inserts are a bit of an acquired taste, though.

Quality is very high, having taken a significant step up from the previous car. Excel models sit at the top of the range with leather upholstery that adds a touch more luxury and class.

Unlike some modern electric and hybrid cars, the Prius has evolved to maintain a level of usability more comparable to any other hatchback on the market. For its size its boot is naturally smaller than it would be without all the hybrid bits under the floor, but it can still take 502 litres of baggage if you’re willing to pack it to the rear windscreen.

There are cupholders, a covered central storage bin and door pockets that can hold chunky bottles. 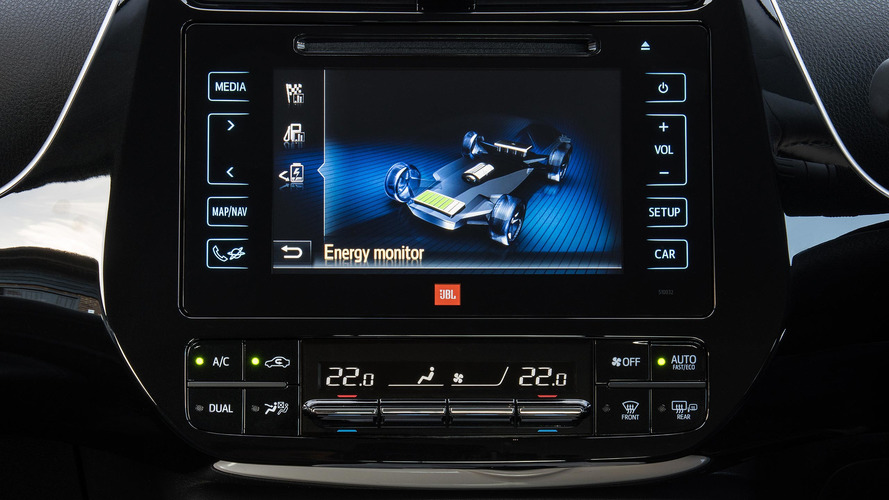 Dealing with the most obvious factor first, the Prius runs on a petrol-electric hybrid drivetrain that Toyota has been developing since the early 1990s. As a full, or closed hybrid system it doesn’t need to be charged manually, instead using a much smaller battery than plug-in hybrids and constantly balancing the electric motor with a 1.8-litre petrol engine and continuously variable transmission.

It’s a fabulously intricate system of give-and-take that works with incredible finesse. The only comparable hybrid systems that work with greater refinement are those in Toyota’s luxury sister company, Lexus.

Inside the cabin there’s Toyota’s Touch 2 multimedia system, incorporating hybrid-specific energy flow readouts, which are the height of nerd cool. There’s heated and auto-folding door mirrors and powerful but energy-saving automatic LED headlights even on the entry-level car, plus a reversing camera.

On higher models Toyota adds front and rear parking sensors, automatic parking, voice recognition, Wi-Fi connectivity and a 10-speaker JBL sound system. The one annoying thing is that navigation is only standard on the Excel range-topper. 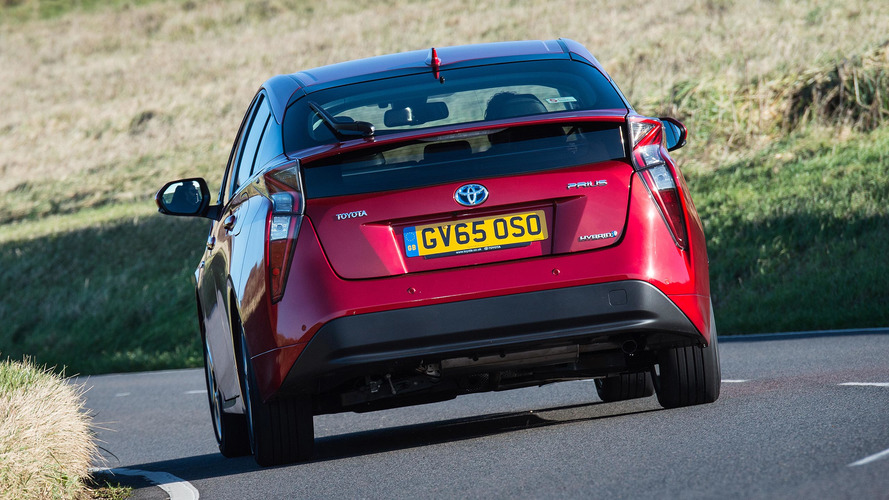 Performance is the Prius’ weak point. It has a reasonable turn of pace around town thanks to the electric motor’s instant torque helping the petrol engine out, but it quickly feels asthmatic on faster roads, producing an irritating monotonous drone under full power courtesy of the CVT transmission.

Handling is fine. There’s nothing wrong with the way it steers, for example. The wheel is light and lacks any real sense of feel but the front end turns accurately, without the spongy, disconnected feel of older hybrids. A stiffer chassis in the right places with deliberate compliance in others has made comfort and leisurely progress the main aim, but it does introduce a greater sense of cohesion than in previous Prius’. 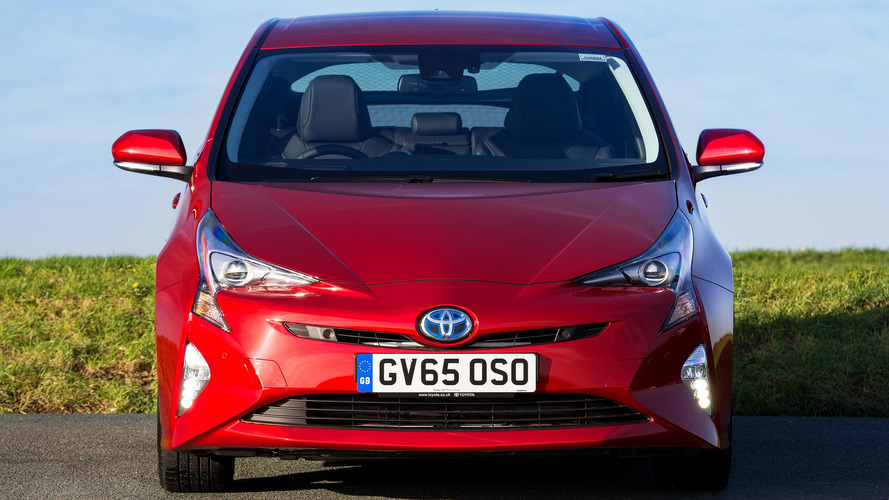 The entry-level Prius has an amazing list of safety features that aren’t normally standardised at this price point. LED headlights are easier on the driver’s eyes at night, producing a colour of light much closer to that of daylight than either halogen or xenon can manage. The headlights also activate automatically when light levels drop.

Not only that, but Lane Departure Alert and Adaptive Cruise Control are present and correct, with help from Road Sign Assist, which isn’t infallible but keeps an eye out for road signs and displays the current speed limit on the interior display. It doesn’t always see smaller signs but it’s generally useful.

To see a reversing camera at this level is also good. There are cheaper cars that have them, but not cheaper mid-size full hybrid cars. Other safety highlights on more expensive versions include a head-up display, blind spot warnings, rear cross-traffic alerts and automatic parking.

Euro NCAP naturally awarded the car five stars, with very high scores for adult and child occupant protection as well as safety assists. The pedestrian protection score is good, too. 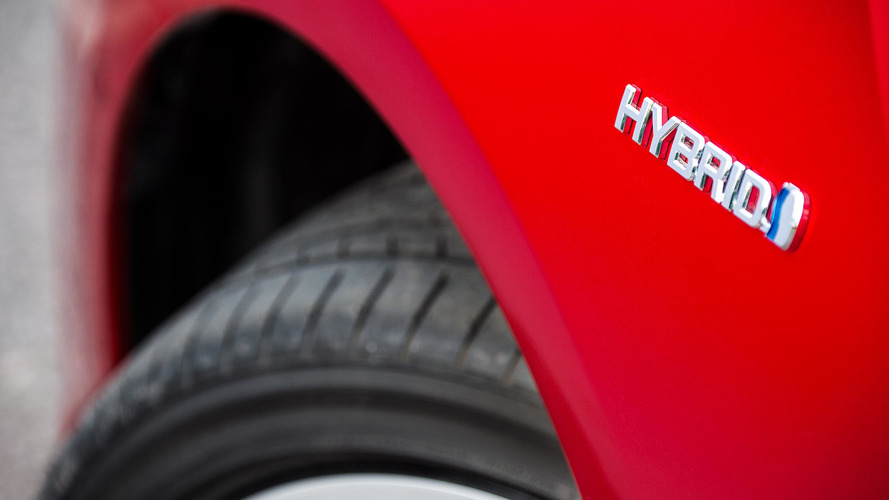 As befits its sensible, level-headed buyers, the Prius’s colour palette looks like one from 20 years ago. Flat white is the free option, with another white as a pearlescent option and then a straightforward range of black, grey, silver, blue and red. Each one is as typical as it gets, so when you picture the lovely Galactic Blue, it’s as standard a dark blue as it’s possible to imagine. The same goes for Hypersonic Red and the rest.

The most flattering is probably Tyrol Silver metallic, which works with the wheels rather than against them, mitigating the tiny rims’ effect on the overall design. Galaxy Black helps to lessen the impact of the aerodynamics-focused styling, making the car look more like an ordinary saloon or hatchback.

Active trim is the lowest rung on the four-grade ladder, but it’s impressively furnished with technology and safety features. Both it and the Business Edition grade above it both wear 15-inch alloy wheels that allow the Prius to record official emissions of just 70g/km, giving it London congestion charge exemption.

Business Edition feels a little more advanced thanks to its head-up display, which projects key driving data onto the inside of the windscreen. It’s not too much more expensive, either.

Moving up to Business Edition Plus, its 17-inch wheels look far better from a stylistic point of view, but they raise emissions to 76g/km, which misses out on congestion charge exemption. Buyers in and around London will have to decide where their priorities are. This grade can also park itself, but with front and rear proximity sensors as standard, there’s plenty of help on hand for a driver’s own efforts.

Excel brings with it leather upholstery, satellite navigation, an upgraded stereo, automatic windscreen wipers and a host of smaller tweaks.

The Prius is about average height for the class, despite looking as tall as it does. It’s narrow, though, which could be useful for slotting through narrow streets or into garages. This version has been engineered to tow things, too. 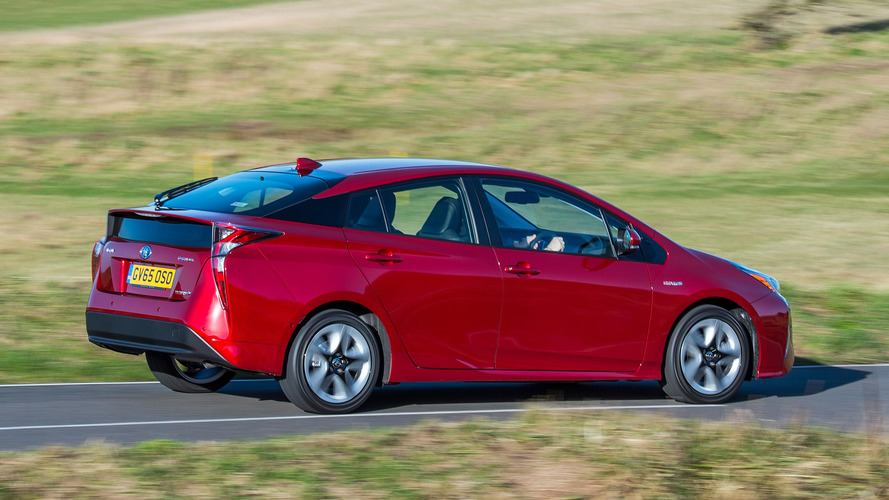 Thanks to quantum leaps in the hybrid system technology over the last development cycle, the Prius can now drive much further on electric power alone, and at higher maximum speed. That has pushed official fuel economy up into the 90s, and a dedicated driver really can match that in the real world, given mostly free-flowing urban roads.

As a full hybrid the Prius is never out of electricity. It always balances the engine and batteries in the most efficient way, but drivers can select a specific EV driving mode to force the car to use electric power as much as possible.

The ability to dodge the London congestion charge is a big deal for a car that doesn’t need to be plugged in to regain electricity. Factored into the Prius’ very low overall running costs it makes the car a fabulously cheap vehicle to own compared to most of the alternatives. Insurance is perfectly average. As for road tax, under the old system it was free, but the new rules mean that owners will pay the same as owners of internal combustion-powered cars.

The complexity of the Prius’ running gear makes most cars look like they were designed for the Flintstones, but Toyota’s reliability record is still remarkably good. This a car that buyers expect to be completely trouble-free, and for the majority of owners that’s exactly what it is. The only drawback is that the CVT transmission can require extra attention in major services, raising the bill. 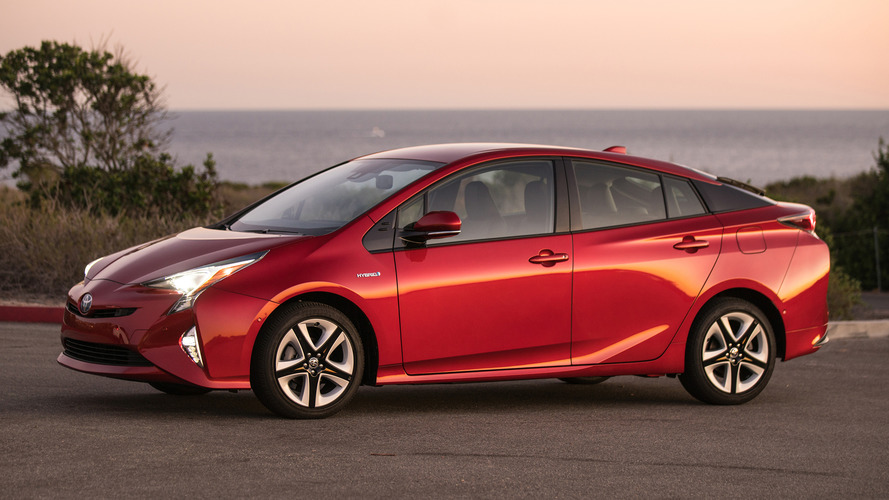 Considering the outright wealth of technology that comes as standard in the Prius, the Active model’s starting price of £24,100 is exceptionally reasonable. Even fairer is the Business Edition, whose £25,000 tag includes several desirable upgrades over Active.

The jumps up to Business Edition Plus and Excel are much bigger. It’s an off-putting £1800 between the two, even though Toyota can justify it with all the extra equipment the Plus gets over its sibling. Remember, though, that if congestion charge is an issue, that £1800 becomes £1800 plus £11.50 per day because of the Plus’ increased emissions.

Finally, another £1455 buys the £28,255 Excel model with its leather and luxury extras. That’s still some way cheaper than the most affordable plug-in hybrids, even after the relevant government grants.