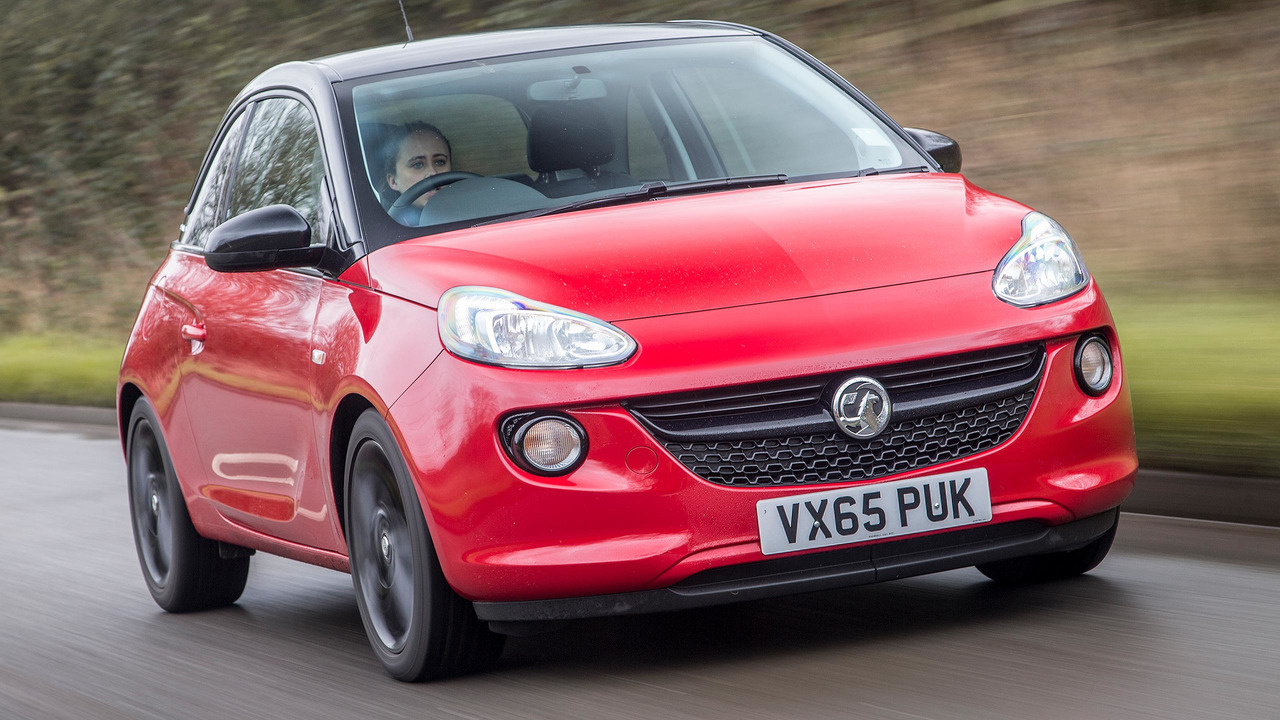 Vauxhall’s answer to the Fiat 500.

As Vauxhall’s high-style answer to the Fiat 500, the Mini, the Audi A1 and the DS3, the Adam city car focuses on aesthetics and the many personalisation options rather than space, practicality and driving dynamics. Colour, design and the humorous names that identify them are the biggest parts of the Adam’s personality, but under the glitzy look are the underpinnings of the larger, previous-generation Vauxhall Corsa, suitably trimmed for its new role. There's an Adam Rocks version, too, with a faint dusting of faux-SUV.

Did you know? The Adam is the first mainstream Vauxhall to have a name that doesn’t end with an 'A' since the demise of the Cavalier

The Adam was built to steal sales from fashionable, high-style rivals and in that mission it has largely failed. It hasn’t captured the public’s imagination in the same way as, say, a Fiat 500 has, nor does it have an instantly-recognisable style or significantly cheaper prices than the Fiat. Because of these things, it’s easy to dismiss it without a test drive. However, on the road, the Adam is nimble, agile and, with more powerful engines, has a cheerfulness that makes it decent company. On the whole, though, despite Vauxhall's attempts to force coolness upon it, it’s just not as appealing as other options out there.

Imagination is the limit when it comes to designing your own Adam. A huge range of body colours, contrasting roof and mirror housing paints and exterior trim highlights give buyers the freedom to shape it exactly how they want. Vauxhall has changed the options structure, though, focusing more on packages of extras that work well together rather than overloading customers with choice. The aim is to make it easier and faster to specify and buy one in a world ever more led by instant gratification.

Trying to steal the Fiat 500’s thunder while staying true to Vauxhall family styling is impossible, and that’s the car’s chief mistake. It’s not striking unless it’s ordered in an extremely bold colour, and it’s in no way iconic or definitive. The safe, understated lines barely make an imprint on your memory, like the quiet, nice guy at the school disco who you ignored in favour of the captain of the football team.

That’s not to say it’s a bad-looking car. It’s quite cute in its own way and looks as good with pastel colours as it does in the sportiest Adam S trim. It’s a versatile shape and a blank canvas in many ways, but it just doesn’t have enough intrinsic style to compete next to the likes of the Fiat 500 and Mini. The Adam Rocks has rugged off-road style trim extras, but for the price it’s not enough.

Depending on the model and specification the large, horizontal plastic trim insert across the dashboard can be piano black or the same colour as the body. The latter option brightens an otherwise quite dreary interior and is joined by matching door trim and, optionally, a matching gear lever surround. The shiny finish can look cheap, but the bland centre console is worse until Vauxhall’s touch-screen interface is added in, neatening and modernising the look and feel.

The Adam is relatively low and it can feel it from the driver’s seat, but that’s fine. The problem is poor suspension damping, which can turn long stretches of bumpy road into medieval torture. On all but the softest springs and smallest wheels the Adam simply doesn’t ride well enough. It seems to get bounced around by even moderate imperfections in ways that the latest Corsa doesn’t.

There’s not a lot to praise on this front. The boot, at just 170 litres, is even smaller than the Fiat 500’s already titchy load bay. For comparison a Suzuki Celerio has 254 litres and a Volkswagen Up 251. Inside the cabin the main door pockets are thin and shallow, there’s an open-faced storage bay beneath the centre console, and that’s about it. The glove box is a decent size, at least.

There’s no five-door Adam option so for more practicality there’s either the similarly-sized Viva or the larger Corsa, both of which have five doors and five seats. The Adam’s seats do fold, though, revealing a bit more space – but still less overall than most estate cars have with all five seats upright. For practicality and versatility the Adam is not a good choice.

Happily, the Adam knows its audience and caters for the young driver’s first priority – a USB port for charging a smartphone or MP3 player. There’s also a CD player just in case, as well as Bluetooth connectivity and an old-fashioned AUX port. All this can be controlled, at least partly, by audio controls on the steering wheel.

Elsewhere, the Adam has standard-fit cruise control, air conditioning and alloy wheels of at least 16 inches in size. Spend a little more money and you get climate control, a panoramic glass roof, LED light features and digital radio reception. At the very top end of the range is Vauxhall’s clever OnStar assistant that connects you to a Vauxhall-trained expert operator to help you out if you need it.

Fortunately there’s an option for the IntelliLink infotainment system, which is a must-have. It’s a bright and user-friendly interface with good graphics and quick responses.

The lower-powered petrol engines don’t offer much in the way of either character or speed. The first to offer something worth the money is the 100hp 1.4-litre petrol in Adam Slam models, which has some fizz. It’s fast to respond to accelerator inputs and has more low-down torque than the disappointing 1.2, leading on to a stronger top end than both the 1.2 and the 87hp edition of the 1.4, and respectable pace on any road up to 50mph or so.

A better bet than any of these, though, is the turbocharged, three-cylinder, 1.0-litre unit with 115hp. It has a deep, smooth note and an equally smooth delivery of copious pulling power, a balancer shaft making this little engine more refined than some rival manufacturers' offerings. It's the best all-round Adam engine of all.

Unless, that is, you'd like your Adam to be a little hot hatchback. A special Adam S edition has a turbocharged 1.4-litre engine with 150hp, seen elsewhere in the Vauxhall range and powering cars as large as the Zafira Tourer. Vauxhall claims a 0-62mph sprint time of 8.5 seconds for the little Adam, but don’t be fooled: it feels a lot quicker than that. It’s only hampered, on paper at least, by having to shift into third before hitting 62mph, which slows the figures down and lowers the insurance implications. Other manufacturers have used the same sneaky technique before.

Quick steering and a short wheelbase, with wheels at each corner, help to give something of a go-kart feel at times, but that’s also thanks to the over-stiff suspension. It’s a double-edged sword with driving fun on one side and general discomfort on the other.

Just because it’s small doesn’t mean the Adam skimps on the basic safety equipment.It has six airbags; two at the front, two at the front sides and two curtain airbags that run along the sides of the head lining. It’s not the safest car in the class according to Euro NCAP, which gave the Adam four stars rather than the five scored by the likes of the Volkswagen Up, but it still offers very good protection – particularly for adults.

Stability control is standard, along with traction control, which counters wheelspin on slippery junctions. Anti-lock brakes are there to prevent skids under hard braking.

Adam buyers are hardly short-changed for colour choice. At least 12 shades are offered on the Adam S, with a whopping 20 body colours for Jam, Glam, Slam and Unlimited models. The basic Adam Rocks only gets four boring colours but the Rocks Air gets 20 and the Rocks S 12. Most have some sort of pun as part of their name.

Some of the brightest and best colours to flatter the Adam are Let it Blue, Red ’n’ Roll and James Blonde. Depending on the trim grade the interior can be ordered in a variety of colours, too, though only a handful compared to the exterior paints. Not all colours are compatible with contrasting roofs, so that might affect people’s decisions.

The range isn’t quite linear, with Jam the entry-level and then Glam and Slam offering more luxury and sporty style respectively. Then there’s the Energised, which is a ready-packaged combination of popular options based around the basic 1.2-litre 69bhp engine. There are fewer options and colour choices but a black contrast roof is standard.

On the Adam Rocks side, the basic trim level has no trim name suffix and offers little in the way of equipment. The Rocks Air has more to give, especially with that entertaining turbocharged 1.0-litre petrol engine. There is an Adam Rocks S to mirror the racy intent of the standard Adam S.

Both the Adam and the Adam Rocks have a special Unlimited trim grade, as well, which adds climate control to the basic Jam spec and gives the full range of personalisation options.

The Adam may be based on the Corsa chassis but it’s a good deal smaller. Its turning circle can’t match that of some other city cars such as the Renault Twingo, but it’s manoeuvrable enough for most people.

Petrol power only falls into line with other city cars on the market. There just isn’t a demand for diesels in such small, urban-focused cars, and it’s a good job because any modern diesel that spends too much time at low speed will find that it has problems with its diesel particulate filter.

It does mean that there are superminis a class size up that can easily better the Adam’s fuel economy, but expecting a real-world 40-50mpg across the range is good enough to live with. Only the 1.0-litre Adam can get near the similarly three-cylinder versions of the Skoda Citigo and Seat Mii for fuel economy, though, which can average well into the 50s with ease.

Insurance depends on engine choice but the groupings for the least powerful engines are low. The real problem with the Adam’s running costs is its depreciation, which means finance is usually expensive without big showroom discounts.

Vauxhall does poorly for owner satisfaction, with three cars in the bottom 10 in 2016’s Driver Power survey. The Adam itself was the company’s best-performing car, though, and given that it’s the least complex, a logical conclusion is that Vauxhall’s electronics are prone to problems. The brand posts a lower mid-table result when it comes to overall reliability.

The Adam is too expensive. It doesn’t have enough equipment to justify the price, and it’s not as though all the customisation options come included. It’s very easy to push a mid-range model up to £16,000, which is around £5000 more than a top-spec Skoda Citigo, for example. At more than £18,000 for the Adam S, it’s pricier than a Ford Fiesta ST that will be much better to drive.

Looking at the positives, it’s not as extortionately expensive as a Mini Hatchback. Many of the options available on the Adam are cheap, too; just £80 here and £150 there. It makes the customisation process affordable in itself, but the base prices of each trim grade are just too high. The Adam Rocks looks like especially poor value, since all it offers over and above the Adam is unpainted exterior plastic and an extra 15mm of ride height.