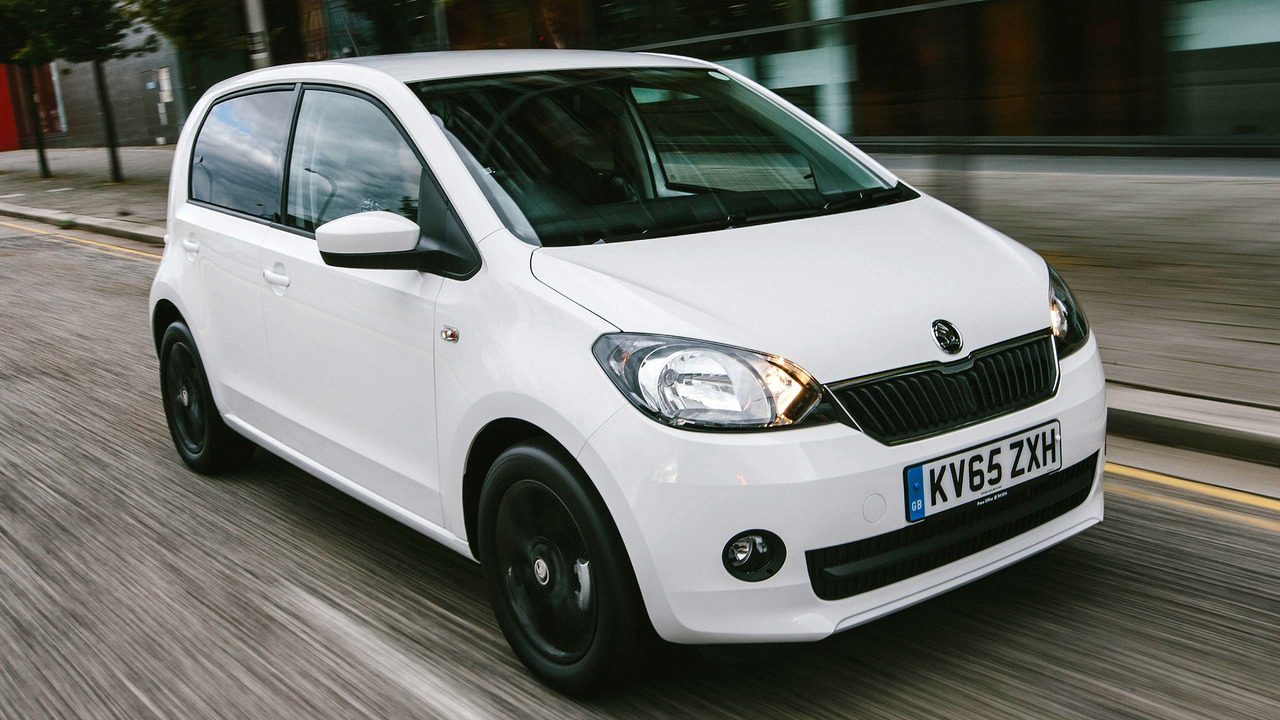 It's Skoda's smallest, that keeps on giving.

The Citigo is Skoda’s smallest car, built chiefly to tackle the urban sprawl and make light work of traffic. Available in three- and five-door layouts, with a deep boot and more interior space than many people would believe possible, it’s a car full of surprises. Power comes from a charismatic three-cylinder engine that helps keep running costs right down.

Did you know? The 75hp Citigo has more brake horsepower than the Mini Cooper S from the early 1960s, with faster acceleration and a higher top speed.

The Citigo is a brilliantly thought-out small car with handy design features, a very frugal engine and a touch of luxury at the top of the range. It consistently manages to impress at all speeds, from its lightweight and nimble feel around town to its unexpected stability on the motorway. Four adults can enjoy a journey in greater-than-expected comfort, and while the boot doesn’t look very large, it manages to swallow an amazing amount of soft luggage. Despite no real updates over its five-year life, it still doesn’t look or feel dated, either. This is easily one of the finest city cars you can buy.

Some might say the Citigo is a little bland, and while it’s true that its lines are hardly revolutionary, that’s one of the reasons the car has aged so well. It has a slightly soft edge to its look, removing the era-specific design cues found on many other cars and giving it a more timeless feel.

That doesn’t stop it being guinea pig-cute, though. It can’t match the Fiat 500 on that front, but it does still have a happy, slightly cartoonish smiley face and dinky, stubby dimensions with a wheel pushed out to each corner. In no way is it sporty or sexy, but it’s not meant to be. It’s enthusiastic, lovable underdog appeal fits it better.

Because the Citigo was built with grown-up style and longevity in mind, the interior is a straightforward black affair for the most part, with a sensible dashboard design and relatively plain upholstery. It’s a mature and logical cabin, with traditional button and dial controls for the air conditioning and CD player within easy reach.

It lacks the shiny or brightly coloured plastic trim inserts of rival cars, and this is a double-edged sword. On one hand, it means the interior lacks the same sense of youthfulness, fashion and fun as, say, a Toyota Aygo or Renault Twingo, but on the other hand it feels higher quality than both, and is unlikely to feel dated anywhere near as quickly. This is an interior that pushes no boundaries, but never gets old.

There is exposed paintwork on the doors, which depending on your point of view either looks cheap or adds a lovely splash of colour to an interior that definitely benefits from it.

The seats are well-suited to city driving, with a comfortable base and back, although some extra lumbar support would be a good thing.

It’s much harder to build a practical small car than it is to produce a practical large one, because there’s so much less packaging space to work with. The Citigo is, however, an impressively practical car, capable of transporting four adults and a weekend bag for each in perfectly adequate comfort and space. The boot can hold an unbelievable amount of soft luggage because it drops deep beyond the load lip.

The two rear seats fold down to increase the boot space, and thanks to boxy dimensions the car can swallow really large items. The seats don’t fold down to the same level as the boot floor, though, so it’s not a flat load area unless you specify the optional variable boot floor. The boot has a small number of lashing points and hooks, which are useful as standalone features or if specifying the optional cargo nets.

Depending on the trim level specified, extra practical touches include net pockets on the inside edges of the front seats, while a handy clip for holding parking tickets is standard on the windscreen.

Here, Skoda has fallen behind the competition, only providing a touchscreen infotainment device on the top-spec model and certain special editions. It’s a compact but effective unit mounted on a small arm atop the dashboard, controlling media playback, navigation, settings and a detailed trip computer spanning instant and journey-average fuel economy, remaining range, journey distance, journey time and average speed.

There’s also an option to display digital dials for engine speed and coolant temperature. The unique thing about this device is that it’s removable, and can serve as a hand-held navigation device if, for whatever reason, your mobile phone isn’t an option. It does have a USB port, though, so charging a device is possible.

But as handy as the media device is, lower models have to make do with an old-fashioned LCD screen, through which the major stereo functions can be accessed and tweaked. The trip computer in these cars is moved to the main instrument cluster – to the small LCD screen at its base – and they feel quite basic.

The Citigo is not a fast car, but its performance in the environment is was built for is admirable. Around town, up to 40mph or so, the three-cylinder engine gives eager acceleration and enough torque to get away from a standstill with more verve than many larger cars. A kerb weight of just over 850kg helps with that, giving an immediacy to its reactions that helps it feel thoroughly nippy.

It’s a similar story in corners, where the short wheelbase and small wheels give it a hint of the go-kart feel enjoyed by the sportiest superminis and city cars. The suspension is soft, so there’s a little body-roll, but the Citigo turns keenly via accurate – if numb – steering and grips for all it’s worth.

The suspension is quite short-travel, especially in the 15mm-lower, more aerodynamic Greentech versions, and when loaded up in corners it can seem quite harsh over larger bumps.

It may be small, but the Citigo qualifies for a maximum five-star safety rating from Euro NCAP, recording 89% for adult occupant safety and a very impressive 86% for safety assistance systems. The Citigo was one of the first city cars to offer autonomous emergency braking as an option, for example, and stability control is standard in the UK.

It also has as many airbags as much larger cars, scores highly for child occupant protection and has Isofix child seat mounts on the rear seats.

One more point in the Citigo’s favour is that the grip offered by its four small tyres far exceeds the stresses put on it by its weight, letting it steer and stop very quickly, despite only having small disc brakes at the front and simple drums at the rear. This is a nimble car, able to avoid danger in an emergency better than larger, heavier and slower-responding vehicles.

Only Tornado Red is free among the colour options. The two other flat hues, Candy White and Sunflower Yellow, attract £160 and £520 charges respectively. The five metallic and pearlescent paints are also £520, and, given the size of the car, that seems like a very unreasonable charge.

The colour choice is broad and varied, though, with the metallic options covering Spring Green, which suits the car perfectly, bright and cheery Crystal Blue, the more mature Tungsten Silver and the slightly dull-looking Dark Sapphire Blue. Deep Black is the solitary pearlescent option.

The core trim levels are S, SE and SE L, mirroring changes that have been made to other Skoda cars in the past few years. Previously the top grade on the Citigo was called Elegance, but in switching names the equipment quota has stayed very much the same.

S grade is very basic, with just two speakers for the radio and CD player. A USB port is standard, but the seats are a cheap-looking fabric. Electric windows are now standard, though, unlike earlier versions of S trim. SE adds manual air conditioning, an infotainment device with navigation and electrically-adjustable mirrors, giving you everything you need.

Aside from the linear core spec levels, there is the standalone Monte Carlo, which, despite being limited to the cheaper engine, is actually the most expensive choice at list price. It gets black wheels, a sportier interior and gloss black dashboard trim. It wears 15-inch wheels and isn’t quite as efficient as the rest of the range. But it does look good.

Then there’s the Colour Edition. Based on SE trim, it’s less of a permanent fixture than the Monte Carlo, but uses the same 60hp engine and offers the extra choice of having a white, black or body-colour roof when the body is any colour except Sunflower Yellow or Dark Sapphire Blue. Metallic paint is included in the price, too, giving buyers free range. Black wheels are standard.

Although it’s longer than the two-seat Smart ForTwo, the Citigo is still incredibly easy to park. Having the wheels so close to the corners helps it slot into very short spaces. There will certainly be no trouble with fitting the Citigo into any garage or onto a driveway.

On a typical urban and suburban drive with some free-flowing road space and some traffic, it’s easy to record more than 50mpg. Even in frustrating, slow-moving traffic, the Citigo largely refuses to drop below 40mpg. It takes a particularly rough driver to drop below that.

On a longer run with speeds kept steady, it’s very possible to record close to 70mpg, even with two people and luggage on board. The three-cylinder normally-aspirated engine is extremely efficient up to 60mph, after which the final of its five gear ratios can no longer keep the revs low enough to record the car’s best fuel economy.

Servicing and parts are cheap, insurance is very affordable and consumables are both cheap and long-lasting. Premium tyres cost around £50 each for cars with 14-inch wheels. They, as well as brake discs, pads and shoes, can last as much as 30,000 miles.

As such a simple car, the Citigo can’t really have any complicated faults. However, it appears not to have been built with quite the care dedicated to larger Skodas, with four UK recalls listed with the Department for Transport. Two affect only certain cars with the optional panoramic sunroof, one is an electrical issue relating to the passenger airbag in cars from early 2013, while the fourth involves the manual rear door child locks disengaging without warning – a fault also affecting certain Rapid and Octavia models.

Considering how versatile, efficient and enjoyable the Citigo is, the prices look very attractive. The basic three-door S model with the 60hp engine is £8,495, rising to £9,405 for the cheapest SE and £10,345 for the most affordable SE L. Switching to five doors adds £350.

Upgrading from the 60hp engine to the 75hp one costs between £360 and £390, depending on the model, but buyers should be wary. There are many ways of adding desirable options for around that sort of price point, and it’s all too easy to stray into a four-figure bill for extras.