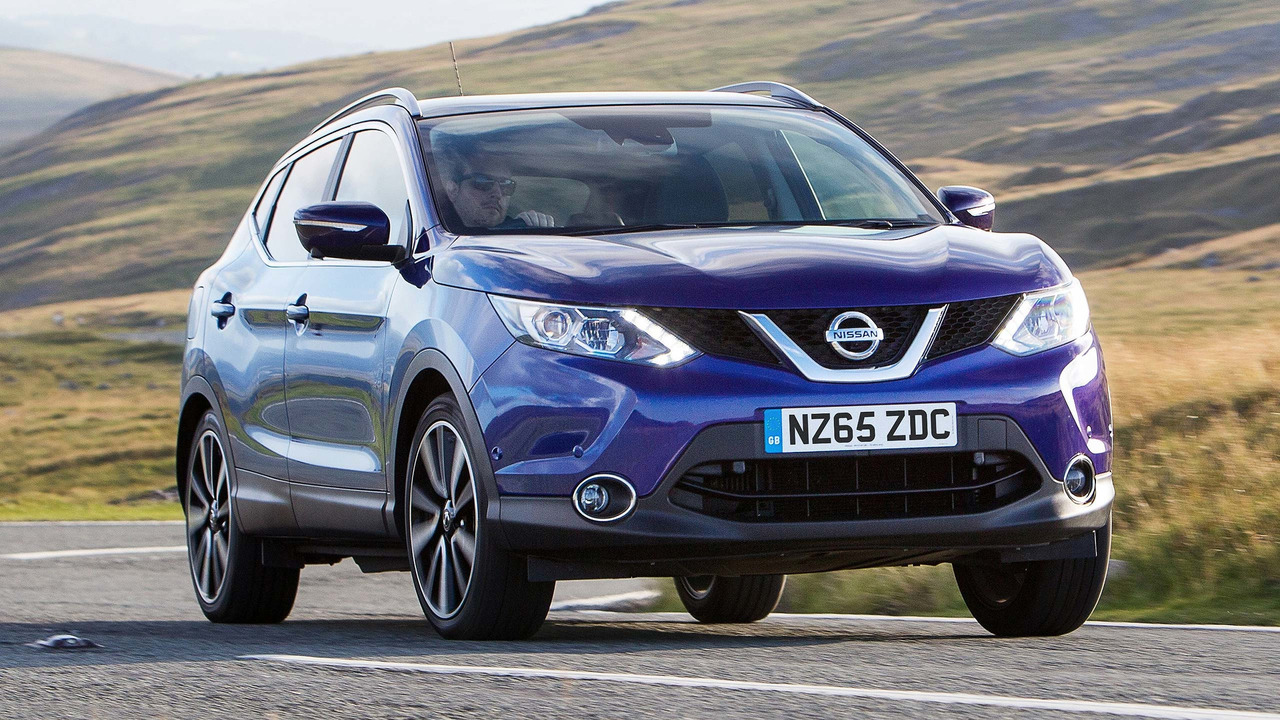 The Nissan Qashqai is a car that, in 2006, began the crossover craze in the UK, after ill-fated attempts by Honda and Suzuki in the early 2000s proved to be ahead of their time. The Qashqai combined hatchback-like driving dynamics and inoffensiveness with a higher SUV-like driving position. It seems a simple or even an obvious idea now, but at the time it began a buying habit revolution.

Did you know? The Qashqai peoples are a group of tribes of Turkic origin, stretching from western to central Asia

The Qashqai is the Volkswagen Golf for those people who want to sit higher up. It does everything very well, perhaps apart from performance. It’s smooth, it handles and rides well, isn’t too big and is pretty comfortable for five. Buyers expecting something better to drive will be disappointed; there’s a general lack of excitement throughout the range, but the Nissan is nonetheless a fearsomely competent everyday car that ticks a lot of boxes for a lot of lifestyles.

Nissan’s family styling has reached just about every corner of its range of cars by now, but none wears it better than the Qashqai. The proportions are just right, the large wheel options fill the arches well and there’s a pleasant mix of curves and angles that means the car seems neither curvy nor angular. It’s a great piece of design.

The Qashqai’s image is one of popularity and familiarity. It has no specific face other than each individual one given to it by every buyer who has taken the plunge. It’s almost everyone’s best friend, and those on the outside often look at it with envy, like seeing a group of your friends eating ice cream without you.

Emphasising the 4x4-inspired styling is unpainted trim surrounding the wheel arches, running the length of the sides and around the bottoms of the bumpers.

Most of the broad surface areas are covered with soft-touch materials or, in the top-spec models, leather. There is a bit of a difference between the cheapest and most expensive versions’ interiors, with the former seeming a bit lacklustre and cheap versus the latter’s busy but organised and logical array of buttons and screens surrounded by classy trim designs. All boast the same deep-down solid build quality, though.

Nissan hasn’t tried to reinvent the wheel here. When the NissanConnect seven-inch touch-screen arrives at N-Connecta level the interior takes a definite step up, but still it keeps the climate control dials, as well as the buttons for demist, heated windscreens and the like separate, for easy and fast access. It’s a fairly ideal combination of features quantity and the right amount of streamlining.

The interior isn’t particularly exciting at any trim level. It’s intuitive and unchallenging, both in its ease of use and its deviation from the status quo. That’s a good thing for everyday usability and for forging a quick and lasting bond with the car on your first drive.

At 430 litres, the boot beats a typical compact hatchback’s by 50 litres. The body height also means more room to lower the floor for better rear passenger comfort and to accommodate 60:40 split rear seats that fold completely flat. In the boot there’s a false floor that can be taken apart and arranged in more than a dozen different ways to segregate shopping or other bits and bobs that might be damaged if given too much space to roll around.

Four-wheel drive is an expensive option that most people don’t take up, but anyone living in the countryside or who are afraid of harsh winters might appreciate the extra practicality the system offers.

Nissan has turned the Qashqai into one of the real-world car market’s outstanding stars when it comes to technology. Some of its advanced features are specifically safety-related but others are both for safety and practicality - or maybe even just because they’re cool.

The Around View Monitor is a prime example, using front-, rear- and side-mounted cameras to create a bird’s eye view of the car from above. It’s a remarkable, almost computer-gamey display that can even let you manoeuvre the car with fully black-out windows, although it’s not recommended…

NissanConnect can hook up to smartphones and display apps like Facebook and Twitter on the main screen. There is, of course, a USB port on all cars along with Bluetooth connectivity. It’s worth noting that even basic Visia Qashqais can be optioned-up with front and rear parking sensors, among other things.

The Qashqai is entirely vanilla in the handling department. There’s nothing wrong with it and some of the time it’s just what you want, but ultimately it’s not especially interesting, either. But the important thing about vanilla is that if we all had to live with just one ice cream flavour for the rest of our lives, most people would choose it. Frozen dessert analogies aside, the car really does do an excellent job of managing the vast majority of life’s everyday situations.

The ride is generally very good, even on the larger 19in wheels where a degree of harshness starts to interrupt the composure on rough roads. It’s a well-judged mix of stability and softness, absorbing the worst of the bumps and smoothing out deteriorating surfaces while controlling body roll. As such the Qashqai doesn’t corner like an SUV; it belongs to the crossover crowd, where hatchback handling dynamics are just about maintained.

On a more disappointing note, the engines leave a little to be desired for straight-line speed. The diesels are tuned to give most of the torque within the first short space of pedal travel, making them feel eager and powerful, but when you press the pedal all the way, the engines have little extra to give. Meanwhile, all too often on fast country roads, the downsized 1.2-litre petrol engine need to be strained to its maximum. The 1.6-litre is a better bet - still hardly fast, but more relaxing.

There’s an impressive selection of safety equipment in the Qashqai, albeit not always standard. Nissan calls the suite of active technologies its Safety Shield. From traffic sign recognition and automatic main beam activation, to lane departure warning and autonomous emergency braking, there are no better-specified compact crossovers on the market when it comes to safety.

Blind Spot Vision shows a warning light by the door mirrors if an object is in your blind spot, and Driver Attention Alert can take a reasonable guess at when a driver is tired. Around View Monitor is especially clever, giving you a great overall picture of how clear the area around the car is. No more reversing over hidden kids’ toys that have been left lying around.

The two cheapest trim grades don’t get any of this without adding options, which has cost the car marks in this section. They do have advanced stability control, but only mid-range models start to benefit. Some features are reserved for the pricey Tekna only.

Unusually for brown shades, Nissan has given this car a metallic colour called Bronze that actually looks quite good. Flame Red is the solid, free colour, and it’s a good one, but even better is Magnetic Red, one of the seven metallics. The others are Gun Metallic, Blade Silver, Pearl Black - which is metallic rather than pearlescent, Nightshade - a stunning dark purple that looks superb in direct sunlight, and beautiful Ink Blue.

Visia, Nissan’s traditional range-opening trim, is the entry point. It has a fairly typical spread of features at this price, including four electric windows, a 5.0in screen, an admirable passive and semi-active safety suite and cruise control. It has an AM/FM radio with a CD player, USB port and Bluetooth, but no DAB reception.

N-Vision is a special model that’s focused on style, taking the N-Connecta and adding Alcantara seats, a panoramic roof, heated front seats and electric seat adjustment for the driver’s chair.

Tekna is the top dog, fitted with the rest of the Nissan Safety Shield, 19in alloy wheels, full-LED headlights, a heated windscreen and semi-automated parking.

Although it looks big, partly due to the bulging wheel arches and high roof, it’s really not such a large beast. A little over two metres wide including mirrors means a tight squeeze for some garages, but in general the Qashqai feels a lot bigger than it is.

The Qashqai doesn’t claim to set the standard for fuel economy, and it doesn’t. Its engines are all in the middle of the pack for efficiency, with the exception of the dCi 110 diesel, which hit 74mpg in official tests on up to 18in wheels. There’s even a sub-100g/km CO2 variant. It’s underpowered, though, and needs to be worked hard a lot of the time, which shatters any dreams of fuel economy beginning with a six, let alone a seven.

The petrols are officially capable of high-40s on average, but about 40mpg is the best to hope for without serious dedication.

Residual values aren’t bad, but are starting to be hurt by the car’s sheer popularity. There is always so much choice on the used market and prices drop as a result. Ownership should be affordable thanks to modest insurance premiums and good-value servicing.

The Qashqai, for all its popularity, leaves owners wanting for reliability. It isn’t far from the bottom of the table in the 2016 Driver Power ownership satisfaction survey, with people citing a wide range of small but troublesome issues, including electrical gremlins that prevent the car starting at all. Electrical issues are all too common. Nissan lags well behind the reliability records of its Japanese compatriots Toyota, Lexus and Honda.

At £18,795 the Qashqai Visia looks like decent value, but that model is a loss-leader that makes do with the substandard petrol engine. For the entry-level diesel it’s £20,625, although this is still broadly comparable with a Ford Focus hatch. The diesel Acenta is more than £2000 more expensive again, at £22,685.

At the top of the range, Tekna starts at £25,015 with the entry-level petrol, £26,635 to net the basic diesel and £27,885 for the more powerful one. If petrol power is good enough, the cheapest Tekna offers a brilliantly luxurious crossover for the money.