The Mazda 6 large family car tops the Japanese brand’s range. It’s not the newest car in its class but it has always been one of the best – and after updates in 2016, it can still compete with newer rivals such as the Skoda Superb, Ford Mondeo and Volkswagen Passat. Originally launched in 2013, and available as a stylish saloon or Tourer estate, it’s the third generation of Mazda 6. Using Mazda’s so-called 'KODO – Soul of Motion' design theme and high-efficiency SkyActiv diesel and petrol engines, it’s a good choice for private and fleet buyers.

Did you know? The Mazda 6 won the Best Family Car category in 2013 and 2014 at the Auto Express awards

The distinctive and safe Mazda 6 should be on the shortlist for families and business executives looking for a competitively-priced big new car with kerb appeal. Available as a spacious saloon or Tourer, it has great presence, a quality feel, and it handles well. Priced from £19,995, the Mazda 6 has a strong but limited range of SkyActiv petrol and diesel engines. The 150hp diesel is especially frugal and capable of 68.9mpg, with CO2 emissions of just 107g/km. 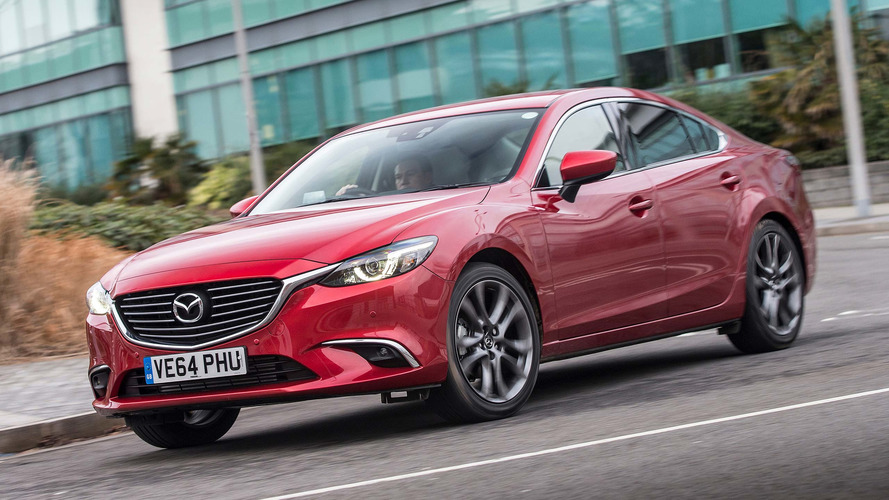 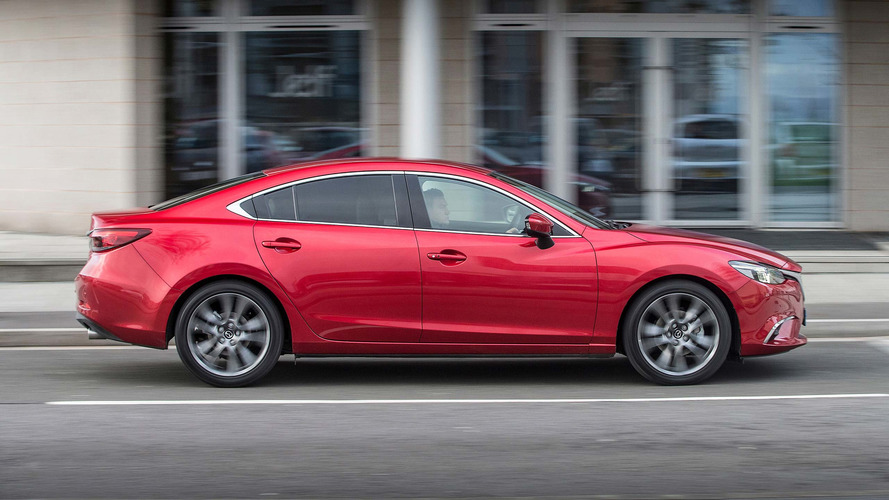 Whether it’s the saloon or Tourer, the Mazda 6 stands out from the crowd. Mazda’s so-called ‘KODO – Soul of Motion’ design language helps here – it apparently takes inspiration from the smooth power and agility of a wild animal as it pounces on its prey. We’re not sure about that, but what we do know is that it has a striking Mazda signature front end with a long bonnet, while the raised and flared wings flow into swept-back A-pillars to give the Mazda 6 a low-slung coupé-like stance.

The Mazda 6 doesn’t just look sleek either – it is. The saloon slices through the air with a low 0.26 drag coefficient, while the Tourer's Cd figure of 0.28 is nearly as impressive. There’s also a long wheelbase – 2830mm on the saloon and 2750mm on the tourer – creating more space inside, while giving it better proportions outside.

The Mazda 6 looks good as a saloon, but it’s also one of those cars that arguably works even better as an estate, so it’s definitely worth considering the Tourer variant for an extra bit of kerb appeal and masses of load capacity. 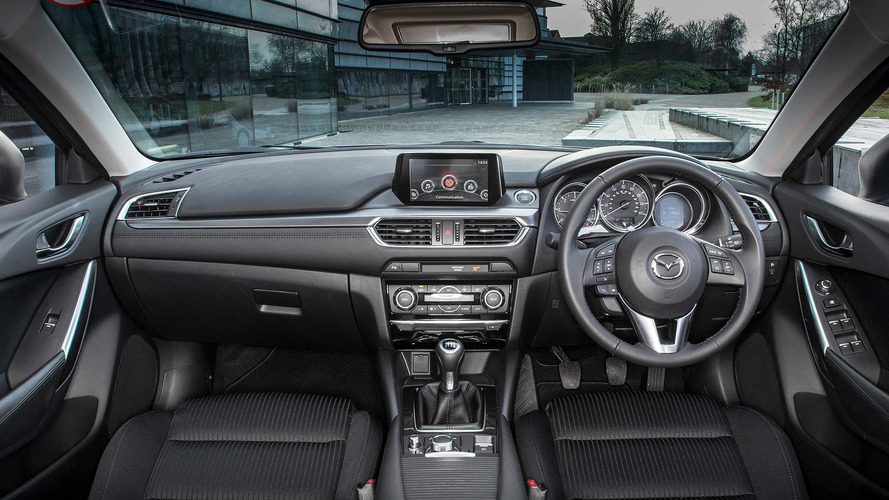 Not many cars can give the excellent Skoda Superb a run for its money here, but the Mazda 6 is one of them. Its spacious five-seater cabin features a driver-focused combination of good driving position and visibility, intuitive layout and generous kit. There’s a sporty feel to the binnacle ahead of the driver and the steering wheel, while the plastics used are generally of good quality.

The centre console features a 7.0in colour touchscreen that displays infotainment details and incorporates DAB radio as well as MZD-Connect, which pairs your smartphone to deliver online internet and social media connectivity. Mazda’s familiar Multimedia Commander sits behind the gear selector, along with a separate volume dial, meaning that there’s no need to reach for the touchscreen all the time as some cars require you to do.

The generous wheelbase of the Mazda 6 saloon and tourer results in excellent levels of space for the driver and passengers. The seats are comfortable but, as ever, you might want to upgrade to leather seats if your budget can stretch a little bit further.

There’s a generous amount of space in the back of the Mazda 6 saloon and tourer, but exceptionally tall passengers may struggle for headroom thanks to the sporty roofline, so it’s worth checking everyone fits.

The saloon has a 480-litre boot capacity, which is good but not exceptional like the Skoda Superb’s, and there’s a relatively high load lip. However, it is possible to drop the rear seats down flat, to create an excellent 1632 litres of space - especially useful for longer items. It’s just a shame that a hatchback version is not also available. The tourer has a generous 522 litres of boot space, or 1664 litres with the rear seats dropped down. 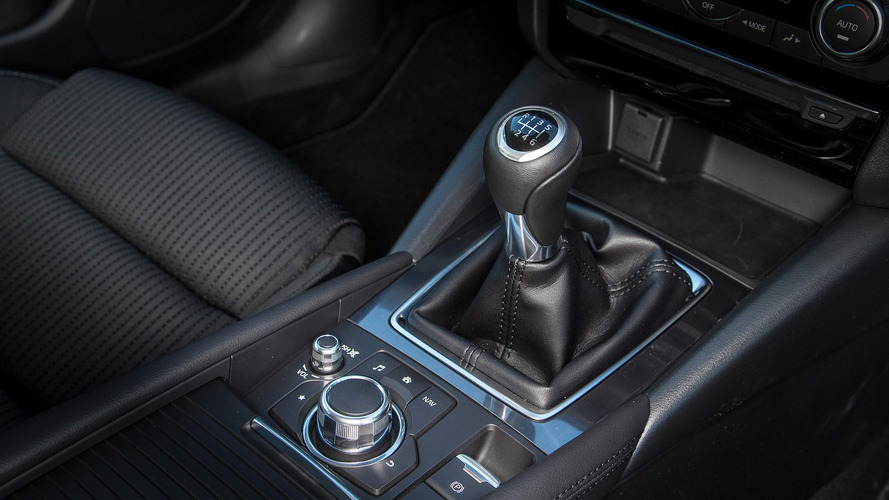 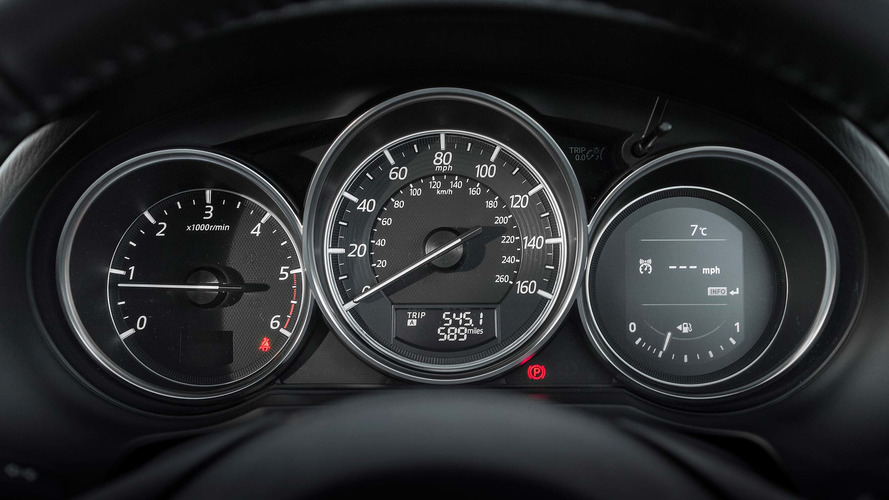 The Mazda 6 is loaded with tech but, naturally, the higher you climb the trim levels (ranging up from SE to Sport Nav), the more you get. All models feature a 7.0in colour touchscreen with smartphone connectivity via MZD-CONNECT which pairs with any Apple or Android smartphone to deliver online internet and social media connectivity. The infotainment system, which incorporates DAB radio, can also be controlled using Mazda’s Multimedia Commander, just below the centre console between the seats.

If you want a built-in sat-nav, you’ll have to opt for the SE-Nav, SE-L Nav or Sport Nav trim levels which include the Mazda Navigation System with three years’ free European mapping. Other tech is available the more you spend, including a head-up display with traffic sign recognition, plus a whole suite of driver aid and safety systems including Smart City Brake Support and Driver Attention Alert.

The Mazda 6 was the first car in the range to get G-Vectoring Control (GVC) which varies torque on each driven wheel to optimise its grip. It's designed to improve driver confidence, passenger comfort and vehicle handling. Mazda’s clever i-ELOOP brake energy regeneration technology is also available with most engines. It's a system which powers some electrics in the cabin with energy captured when slowing or braking and stored in a capacitor.This reduces the strain on the car's regular battery and improves fuel economy. 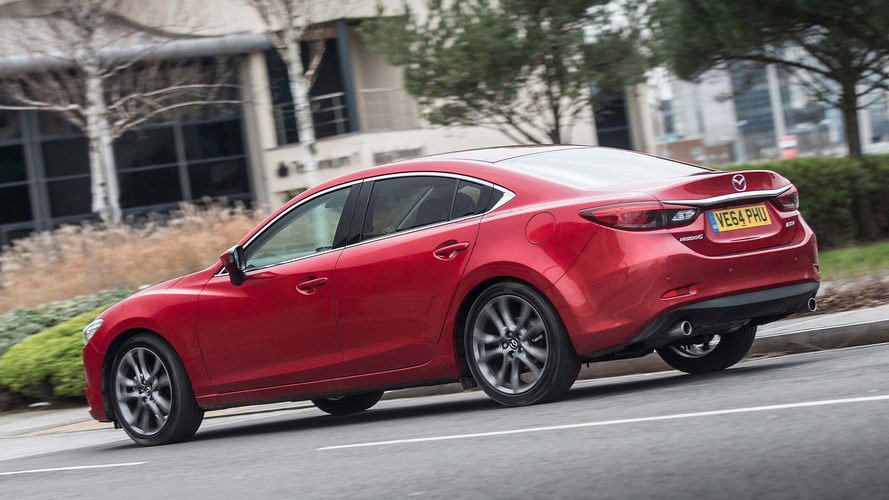 A strong but limited range of SkyActiv petrol and diesel engines is available for the Mazda 6.

Diesels account for the majority of UK sales, and it’s not surprising because these are refined engines with plenty of torque. The 145hp diesel unit will have enough pace for most and is marginally smoother. The diesels also feature Transient Control, which provides a more positive accelerator response by reducing the time lag as the turbocharger spins up to speed and also boosts torque, plus Mazda’s Natural Sound Smoother Technology (NSS), which reduces diesel knock noise during starting and low-speed acceleration.

The petrol engines are gutsy enough, but they need to be revved pretty hard to deliver decent acceleration. They don’t have turbos to fill in the power delivery at low revs. A slick six-speed manual gearbox with a sporty short throw is fitted as standard, but there’s the option of a decent six-speed automatic on all but the 165hp petrol model.

The Mazda 6 offers a rewarding driving experience with sharp handling and a surprisingly sporty feel for such a big car. Some may find the ride a little firm, especially with the bigger wheels, but overall it’s agile and feels planted on the road, whether you opt for the estate or the saloon. 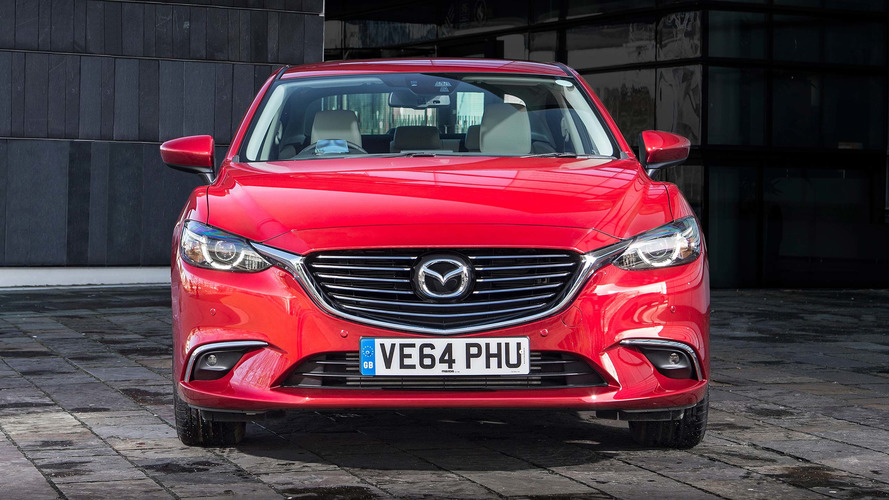 Both the Mazda 6 saloon and Tourer received a maximum five-star rating when they were crash tested by Euro NCAP. They scored particularly well for adult occupant protection (92%), child occupant protection (77%), and safety assist systems (81%) – comfortably above the 80%, 60% and 65% thresholds required in these categories. 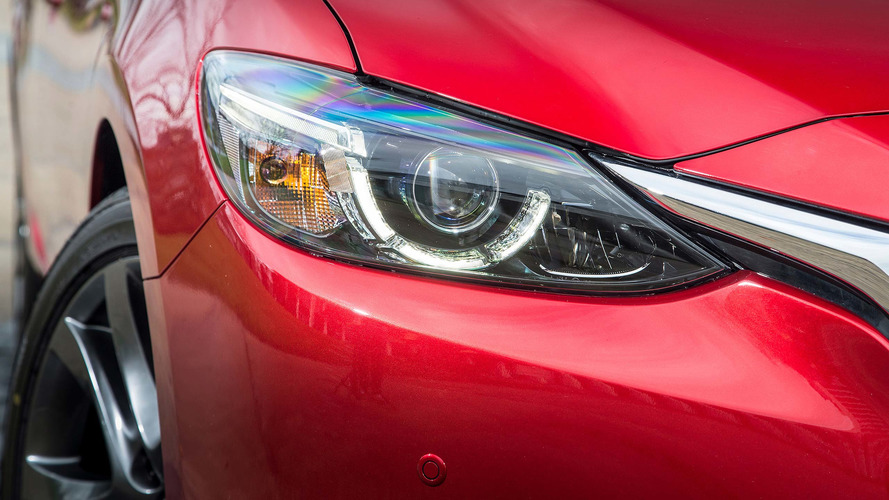 The Mazda 6 is available in eight colours including Mazda’s new Machine Grey Metallic, but you can’t go wrong with the classy Soul Red. This is the colour you usually see in all the adverts. However, if you’re looking for vibrant colours and personalisation options, you’re not in luck – that red apart, the Mazda 6 has a fairly conservative palette.

Whether you choose the entry-level SE/SE-Nav trim, mid-range SE-L/SE-L Nav, or the flagship Sport Nav, you will not be short-changed when it comes to kit.

SE models feature a 7.0in colour touchscreen with smartphone connectivity, 17-inch alloys, cruise control, air conditioning, Bluetooth, an engine start/stop button and DAB radio, to name but a few, as standard. The SE-Nav is identical except that it includes the Mazda Navigation System with three years’ free European map.

It might be worth considering the Safety Pack option which costs £800 and includes adaptive LED headlights, blind spot monitoring with rear cross traffic alert and lane-keep assist.

The Mazda 6 is similar in size to both body-shape variants of the Ford Mondeo and Volkswagen Passat, and while all three have grown in size over the years, they are not unwieldy and there are always parking sensors and a reversing camera to help you cope with trickier manoeuvres.

However, when it comes to load capacity, nothing can beat the impressive Skoda Superb hatchback and estate combo. Even so, as a winner of the ‘Best Petrol Tow Car’ at the Tow Car Awards 2013, the Mazda 6 is also a popular choice when it comes to camping. 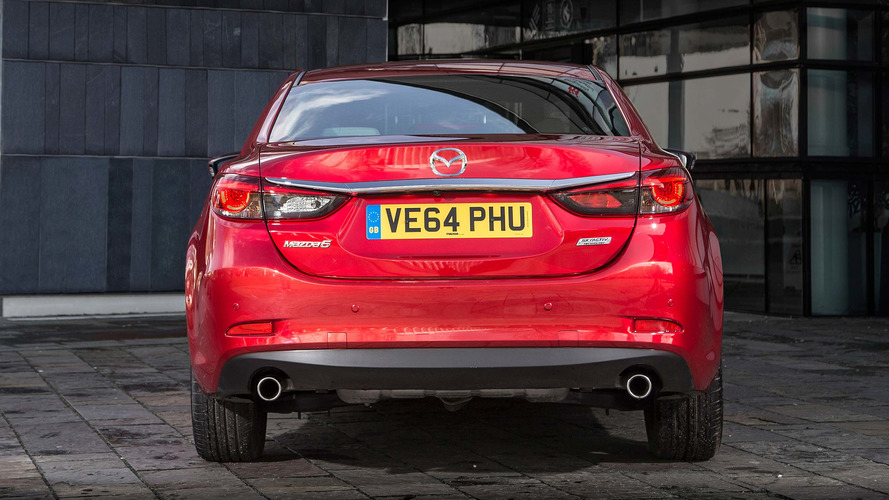 If it’s fuel economy you’re after, then the two diesel engine options are the obvious choices. The 2.2-litre 150hp is the more efficient unit, capable of returning 67mpg while emitting a low 107g/km of CO2. Next up is the 175hp version of the same engine which can manage 63mpg and emits 119g/km of CO2.

The two 2.0-litre petrol options are not quite so economical, but still respectable. The 145hp can return 51mpg, while emitting 129g/km of CO2. The more potent 165hp version has slighter higher CO2 emissions of 135g/km and can manage up to 48mpg. All are official test figures, of course; as ever, the cars will be thirstier in real-world driving, and will generate more CO2.

With a limited choice of fairly powerful engines, insurance groups are average for the Mazda 6. Annual main dealer servicing can be more expensive than many rivals.

Mazda, like most Japanese brands, has a good reputation when it comes to reliability. Indeed, it finished an impressive sixth in the Auto Express 2016 Driver Power survey.

Three-year fixed price servicing is also available from £499 or via a monthly plan. 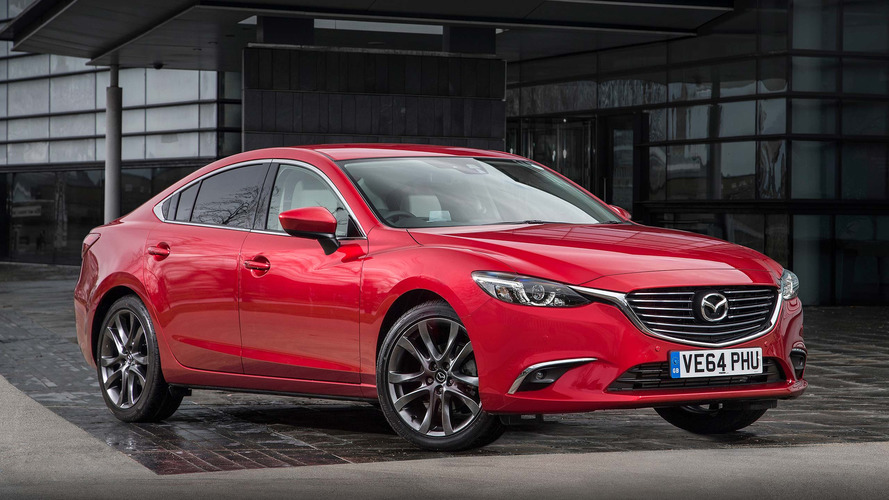 Priced from £19,995 to £29,295, the Mazda 6 is competitive against its main rivals, with only the Vauxhall Insignia significantly undercutting the entry-level car. It compares especially well with the Ford Mondeo, Skoda Superb and Volkswagen Passat.

Mazda could simplify the trim and pricing structure by dropping the ‘Nav’ options and providing sat-nav as standard across the range, like BMW, because it is a basic requirement these days. That said, a shade under £23,000 will buy you an economical 150hp 2.2-litre diesel SE Nav that’s good to drive and swifter than you might think. What’s more, it will come with goodies including the fancy colour touchscreen with smartphone connectivity, 17-inch alloys, cruise control, air conditioning, Bluetooth, an engine start/stop button and DAB radio as standard.

At the top of the range, the fully-loaded 175hp diesel Sport Nav looks good value when compared with the flagships from most competitors including Ford, Skoda and Volkswagen, which are north of £30,000 – even £40,000 in the case of the latter.