Volkswagen's alternative to the SUV.

The mid-sized family MPV is coming under increasing threat from more fashionable (if less practical) seven-seat SUVs, but Volkswagen’s Touran shows just what a good car you can have even when common sense is your primary buying concern. Exciting? Dramatic? Dynamic? No, but it's a thoroughly practical, useful family machine.

Did you know? There’s no five-seat version of the Touran, but you can buy the Golf SV, which is basically the same thing in different clothes.

The Touran is not the sort of car to have you gazing wistfully at it through parted curtains early on a Sunday morning, but if you’ve got a growing family and want a sensible, practical, useful car that has just a modicum of style and visual appeal, then you’ll be glad you bought a Touran. Good engines and lots of optional tech, plus a well-made and comfortable cabin put it right at the top of its class. 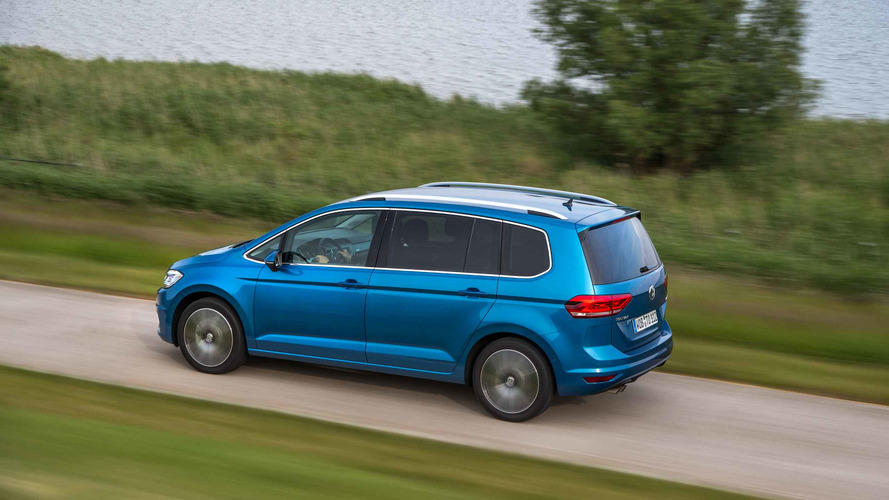 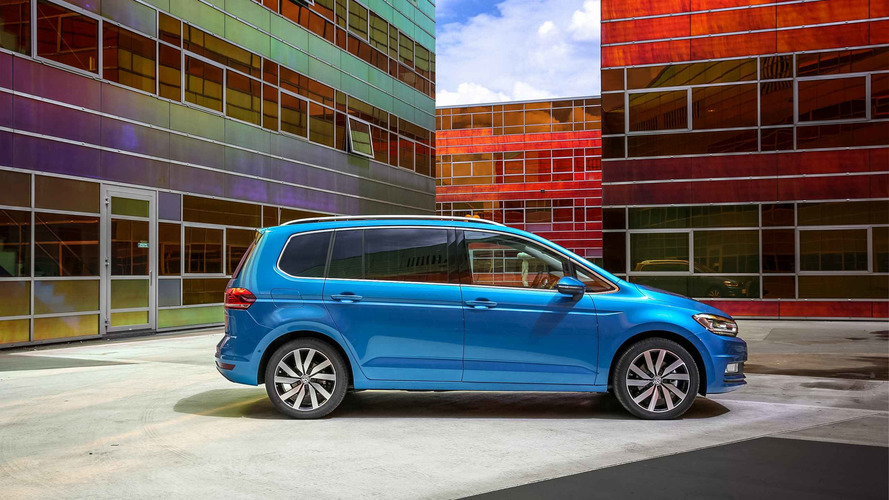 There are only a precious few truly good looking 'monobox' MPVs and while the latest Touran does manage to squeeze into that exclusive club, it lacks the visual dynamism of, say, the latest Renault Scenic. What it does have is typical of the brand – smart, clean, crisp styling that doesn’t excite a great deal of attention, but which you soon come to realise is actually quite handsome. Volkswagen generally doesn’t inject a lot of glitter into its family vehicles’ styling, and the Touran is no exception, but what it does have is nary a line out of place, and no fussy ornamentation that might become tiresome over time. It’s about as smart-looking as you can expect from a car that has more van than sports car in its styling genetics, and if that’s faint praise then it’s praise all the same. Of course, much of the style is lifted above its station by the sheer appeal of the VW badge, one of the few (possibly only, really) mainstream car brands that can match the premium brigade for desirability. 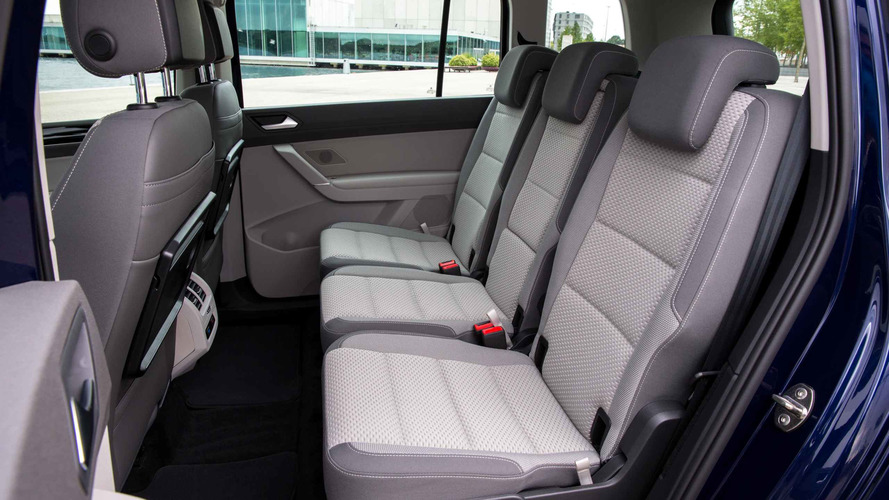 The cabin is regulation Volkswagen, with plenty of borrowing from the Tiguan and the Golf. Of course, while the lack of style might be the swings, you make it up on the roundabouts of quality, usability, comfort and space. The Tiguan’s dash looks exceptionally smart, all of its control layouts are clear and logical, the main dials look expensive and the driving position, although as upright as you’d expect of a car such as this, is comfortable, with supportive seats. No long journey in a Touran will feel like a chore, that’s for sure. The only caveat is that you really need to be buying a higher-end model for the cabin to look at its best. Base models leave rather too many unadorned swathes of plastic on show and can look a touch underwhelming.

This is of course the Touran’s metier, and it stands as surely one of the most practical family cars you can buy. Fold the third row seats into the floor and you have a massive 743-litre boot to play with, and one that is commendably square in shape, so larger items can be easily loaded in (the low boot lip helps there too). For longer loads, models of SE grade and up have a fold-flat function for the front passenger seat, which means you can squeeze in loads as long as 2.7 metres and, optionally, you can have a powered tailgate with gesture sensors under the rear bumper, allowing you to open it with a waggle of your foot. With all seven seats up, boot space shrinks to a mere 137 litres, which is simply indicative of the constant push-me-pull-you war between passenger and load space in an MPV.

Those passengers will have decent space though. Well, they will as long as we’re talking about the five people sitting in the first two rows, all of whom have ample headroom and legroom. The three individual second-row seats all split, slide and fold individually and all have ISOFIX points for child car seats, making the Touran one of the most family-friendly cars on the market. There are ISOFIX points in the third row seats too; these seats are easy to flip up or down but, as is common in this class of car, they do lack for legroom, meaning that once the kids are teenagers or older, they’ll start to complain about a lack of space. You can juggle that space, of course, thanks to the sliding middle row, but slightly tight third rows are more or less endemic to this class of car.

There’s plenty of storage space in the cabin, with big door bins, a decent glovebox (it looks as if there’s two, but the top one is taken up with infotainment connections and the CD player) and a big lidded storage area on top of the dashboard. Plenty of cupholders too, for all those bottles of Ribena Toothkind. 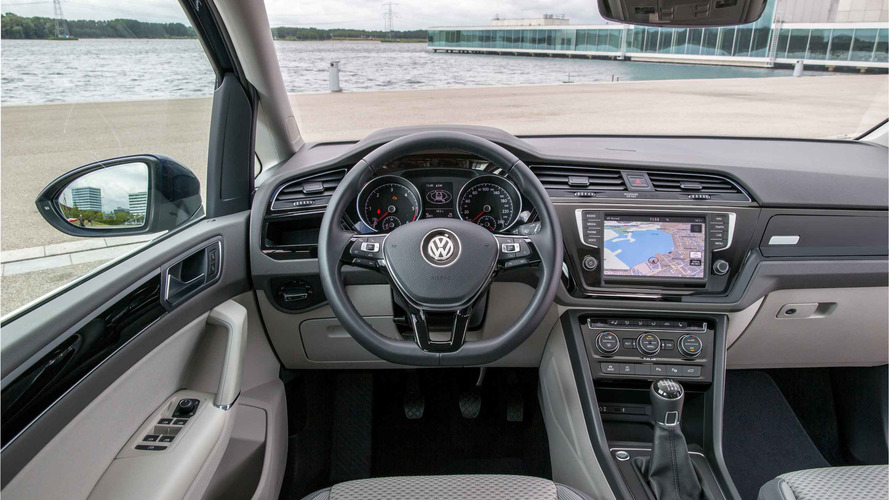 Volkswagen is fast-becoming the go-to brand for the cutting edge of in-car connectivity, and the Touran benefits from all of that technology. So it's disappointing that you have to spend quite a lot extra to get things such as Apple CarPlay or Android Auto, which come as part of the App-Connect package on SE-L models. All cars get a 6.5-inch touchscreen with Bluetooth, USB sockets, DAB radio, SMS text message reader, and the ‘Think Blue’ trainer that monitors your driving technique and gives you eco-friendly tips. SE versions get dusk-sensing headlights, the ‘Discover’ navigation system and a three-year subscription to Volkswagen’s Car-Net ‘Guide and Inform’ services, which brings weather reports, news feeds, parking space information and local fuel station prices into the dashboard. That system also uses the larger eight-inch touchscreen. SE-L models get all of that plus the App-Connect system for smartphones. 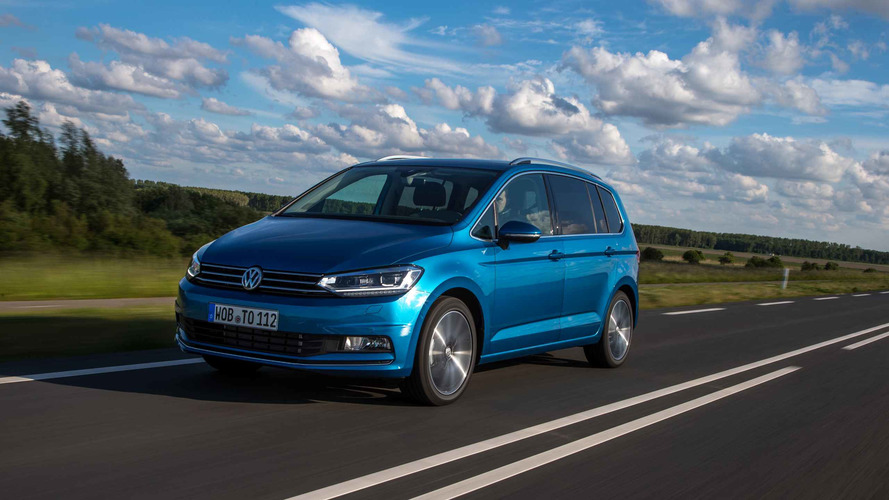 Aside from, on a good day, the Ford S-Max, no MPV is truly engaging to drive, and the Touran, wisely, refrains from trying to be too sporty or sharp-edged. Instead, it concentrates on providing maximum comfort and refinement and sufficient precision that it doesn’t feel wayward or loose on challenging roads.

It hits those targets pretty well. With the same underpinnings as the Golf and Tiguan there were never likely to be any major mistakes made, and if we tell you that the Touran drives much in the manner of a taller, longer Golf, would you be surprised? The steering is light, accurate and lacking in feel, but entirely satisfactory within the bounds of its class. Body control is good, and the damping is surprisingly firm, but the ride never becomes too harsh or busy. The urban ride is particularly good, which fits the brief rather well. The only downside is an excess of tyre and road noise, especially noticeable in the back and which afflicts pretty much all Volkswagen Group cars using the same MQB platform as the Touran.

For urban users, indeed for anyone not covering galactic mileage, the 1.2 TSI petrol turbocharged four-cylinder engine does the job nicely. It’s a refined unit (until you wring it out to the redline, and if you’re doing that why are you driving an MPV?) and it can pretty much match the real-word fuel economy of its diesel cousins if driven gently. That’s true too for the 1.4 TSI petrol option, with 150hp, which is only available on SE-L and R-Line trims.

Those diesels are the 115hp 1.6-litre TDI and the 150hp and 190hp 2.0-litre TDIs. All are refined and have decent mid-range acceleration, and the 1.6 is sufficiently good to have you pondering the need to spend the extra on the 2.0-litre especially as it might just have the edge on refinement. The extra power of the 190hp version is pretty much irrelevant here, and the 150hp model’s 251lb ft of torque means that unless you’re using top-end power all the time, the 190hp doesn’t really have much of a real-world performance advantage. The 1.6 TDI can be had with a seven-speed DSG automatic, while the two 2.0-litre engines can be equipped with a six-speed DSG, but the slick-shifting manual transmission is good enough that you might not see the need to upgrade. 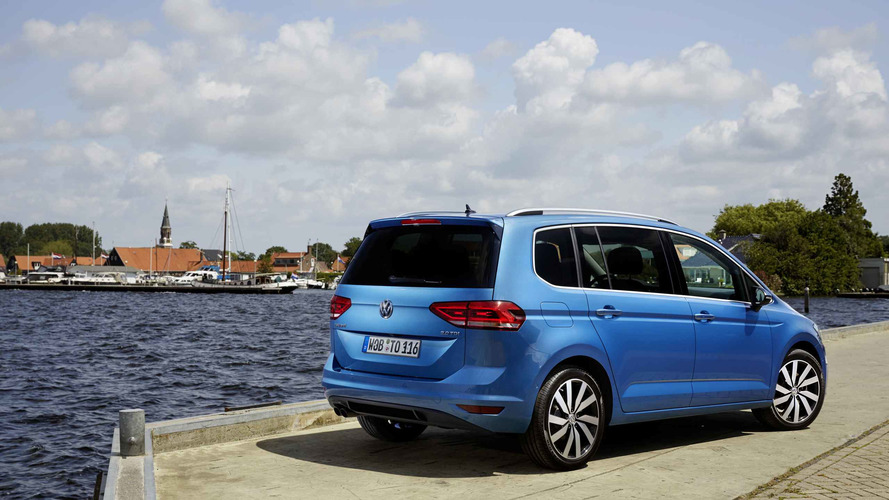 The Touran can be had with an impressive array of safety systems, but many of them are on the options list, which is a shame. Euro NCAP tested the Touran in 2015 and gave it the expected full five-star score with a 88 per cent rating for adult occupants, 89 per cent for child occupants, 71 for pedestrian protection, and 76 per cent for safety assist.

Standard S models come with electronic stability control, seven airbags, post-collision braking system (which prevents the car rolling away after an accident), ISOFIX seats for all rear passengers, tyre pressure loss warning, and an electronic 'differential' system called XDS to improve traction in slippery bends. It works by applying imperceptible dabs of braking to the inside front wheel if it threatens to spin away its power.

SE models get dusk sensing headlights, forward collision warning with city emergency braking, and parking sensors front and rear. SE Family models add the Pre-Crash system that tightens up the seatbelts, closes the window and pre-loads the braking system if it detects an imminent crash (and for which Volkswagen has won an Advanced Award from Euro NCAP), electric child locks, a speed limit display in the sat-nav, and active radar-guided cruise control.

SE-L models get all of that, plus a driver alertness monitor, while side airbags for the second row seats are optional for all models. The Touran can also be optionally equipped with Volkswagen’s Trailer Assist system, which makes reversing with a towed load much safer and more convenient. 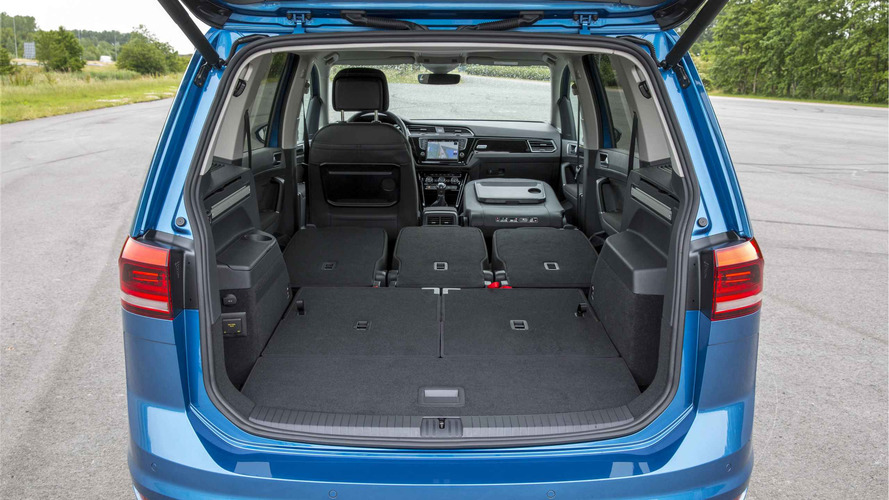 Buyers can choose from Pure White or Urano Grey in non-metallic, or Titanium Beige, Reflex Silver, Caribbean Blue, Atlantic Blue, Nutshell Brown, or Indium Grey in metallic. There’s a final paint option of Deep Black in pearl effect. Black cloth in various levels of finish is the way most Tourans will be trimmed, but there is the option of 'Vienna’ leather in either Titan Black or Storm Grey.

For a spacious car, the Touran is reasonably compact, but still breaks the 4.5-metre mark, so beware of smaller driveways or undersized garages. 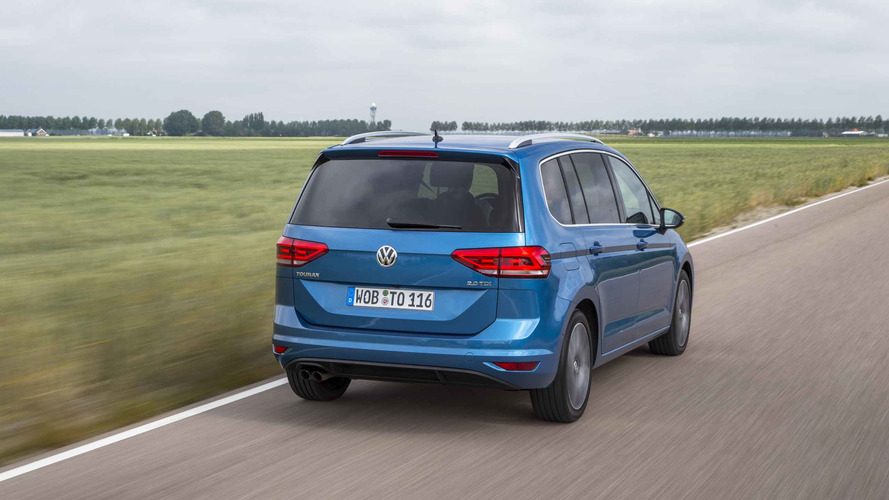 The Touran performs respectably for a car with a high roof and no shortage of seats, but just remember that your consumption figures will be greatly affected by the number of people filling those seats. The 1.2 TSI petrol has official fuel economy of 51.4mpg and CO2 emissions of 128g/km while the 1.4 TSI is slightly behind on 49.6mpg and 133g/km, but it’s worth noting that you can bring those figures down to match those of the 1.2 by going for the optional DSG automatic gearbox.

The Touran has only been recalled once, for a possible fault in the side airbags, and in general, Volkswagen builds very high-quality vehicles, so we wouldn’t expect any major issues to occur. All models come with a three-year, 60,000-mile warranty that can be extended to five years and 90,000km for an extra cost. There are also good-value inclusive servicing packages. 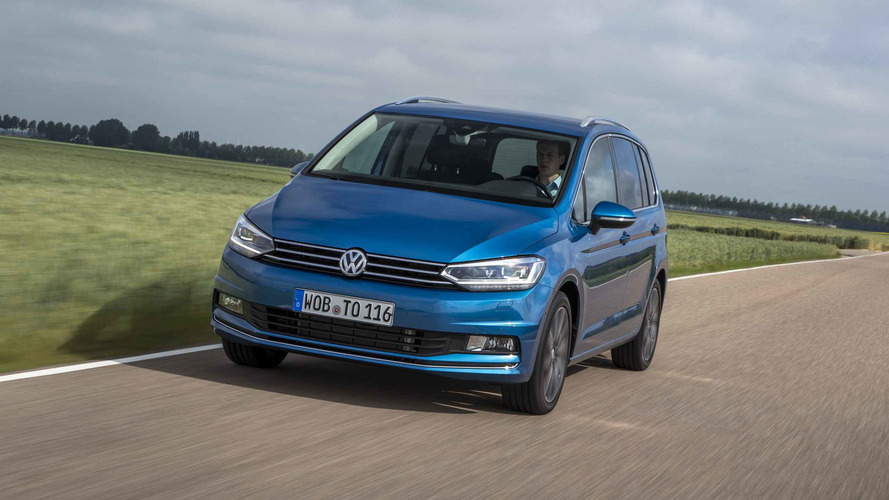 A basic Touran, at around £22,000 on the road, is pretty decent value, but it’s worth remembering that S models have rather bare cabins and miss out on a lot of the better technology, comfort and safety options. You really need to be buying an SE Family model to get the best Touran, and that’s a more considerable £25,000 or so. The cheapest diesel model starts at around £24,000 while the cheapest 1.4 TSI petrol is an SE-L at around £27,000. Top-spec R-Line 2.0-litre TDI diesels push through the £30,000 barrier. While the Touran isn’t viciously expensive, it is worth remembering that cars such as the new Renault Scenic and the Kia Carens represent significantly better value in some trims.