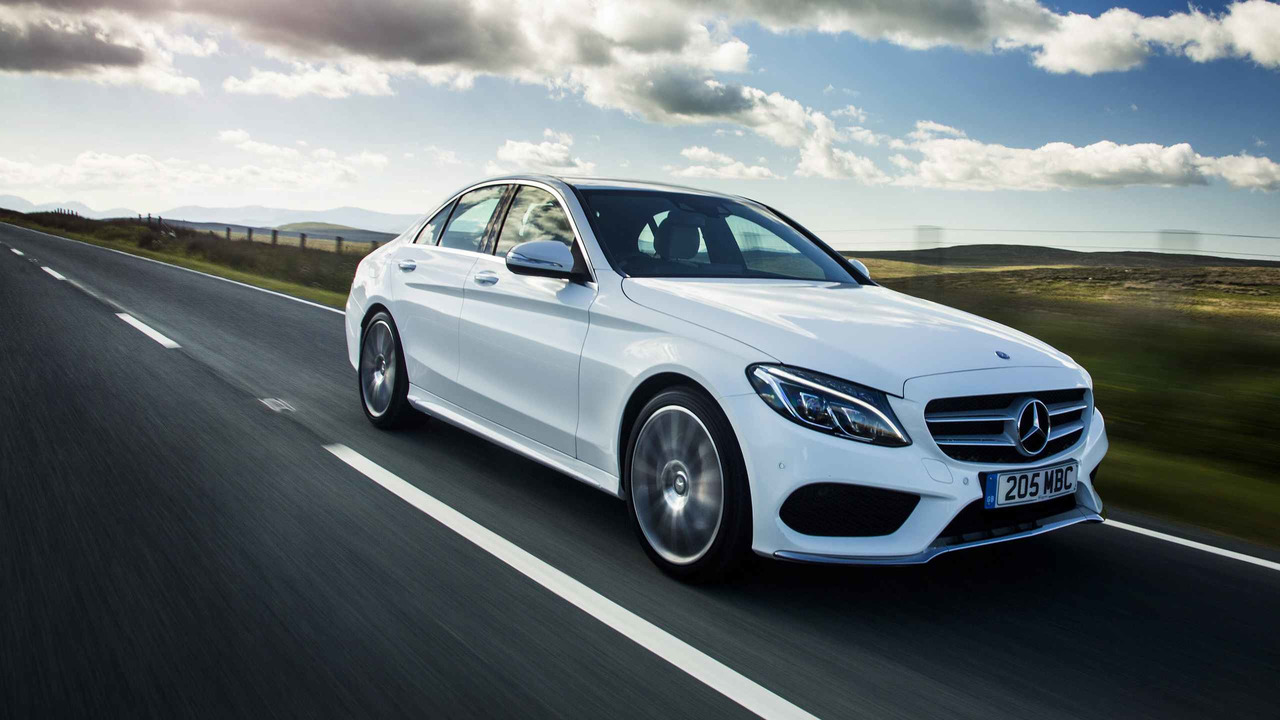 The C-Class is in so many ways a car perfectly described by its badge. Obviously smaller in size than an E-Class or an S-Class, but imbued with many of their characteristics. Striking a comfortable middle ground between Audi’s quiet quality and BMW’s overt sportiness, there’s a solid argument that the C-Class is the best car in its class for many buyers.

Did you know? The current C-Class, code-named W205 by Mercedes, uses a lot more aluminium in its structure than before, meaning significant weight reduction.

The C-Class majors on smoothness. It looks smooth and sleek (albeit you can spot a slight disjoint between the styling of the front and the back), it’s very smooth and satisfying to drive, and the interior is a masterclass in logical control layouts and high quality. Comfort it arguably highest on its agenda, but there’s an engaging chassis too, and surprisingly sharp steering. The only flaw is that the ageing 2.1-litre diesel engines are rather too noisy and uncouth compared to the best of the competition.

The C-Class is handsome; I think we can all agree on that. But there’s something slightly odd about the way that the back of the car looks as if it belongs to a different vehicle than the front. The back of the C-Class is all swoopy and rounded, while the front looks more square-edged and slightly blocky. Both ends look good, individually, but they do look slightly disconnected from some angles.

The C-Class’ cabin is almost without question the best of the compact sports saloon class, superior to the high-quality interior of the Audi A4 on the basis that the Mercedes’ inside is far more enticing at which to look. The only black mark against it is the big central infotainment screen which is (a) not actually that big these days and (b) looks like you should be able to unhook it and carry it away, but you can’t. The rest of the cabin, from the upsweep of the centre console to the smart, handsome main dials, to the rank of circular air vents in the dash centre is pretty much a master-class.

The seats are also excellent, so long-range comfort is simply never an issue, while refinement (aside from the clattering from the 2.1-litre diesel) is generally very good.

At 2,840mm, the C-Class’ wheelbase is that crucial bit longer than those of the BMW 3 Series or Audi A4, which gives it a little more legroom in the back and therefore makes it slightly more practical overall. It is only a relatively small difference, but your rear-seat passengers will certainly thank you. With a 490-litre boot, the C-Class also holds a crucial 30 litres more than a 3 Series, and 65 litres more than an Audi A4, so it’s generally a more practical choice.

We’ve mentioned that the standard infotainment screen looks a touch awkward (and it only goes up to an 8.4-inch screen at maximum), but there’s no doubt about the army of functions to which it grants access. Among the available options are full remote connectivity (which allows you to check the status and location of the car via your smartphone), a Wi-Fi hotspot, a head-up display, speed limit assistant, voice control, a 10Gb music storage hard-drive, Bluetooth and USB connections, a track-pad on the Comand system’s wheel controller that can recognise handwritten inputs for the satnav, ambient lighting, an optional Burmester surround sound system, and a memory package for the electrically adjustable front seats.  You can use the 'Mercedes me' function to set up 'geofencing' (which warns you if the car is driven outside of a certain area), or to track the location of the vehicle, send satnav destinations to the car from your home computer, or even lock or unlock the doors from half a world away. The C-Class does lose a couple of points here, though, for the lack of phone connectivity systems such as Apple CarPlay or Android Auto.

It’s almost surprising how good the C-Class is to drive. Surprising because both Mercedes’ reputation and initial impressions would suggest that it’s a far more comfort oriented car than most of its competition. AMG-Line models do come with sports suspension, which does firm things up a bit, but one of the C-Class’ dynamic high points is its gentle, well-controlled, well-damped ride quality. It’s soft, without being floppy, if you will.

Dig a little deeper and you’ll find a car that really can handle properly. Start asking serious questions of the C-Class’ chassis on a twisty, tight road and you will soon see why it forms the basis for the storming C 43 and C 63 models from Mercedes-AMG. The steering is sharp and reactive, and actually has fractionally sweeter weight and feel than that of the rival BMW 3 Series. Body control is near-perfect. The C-Class is one of those rare cars that’s as good to drive as it is comfortable in which to travel. And it’s very comfortable. The optional Airmatic air suspension only adds to all of this, increasing overall comfort levels but still delivering sharp handling when you select the Sport mode.

Mercedes has an almost unimpeachable reputation for vehicle safety and the C-Class is perfectly representative of that. Tested by Euro NCAP in 2014, the C-Class is one of the highest scoring cars ever measured by the organisation. It received the maximum five-star score, with a 91 per cent rating for adult occupant protection, 84 per cent for child occupant, 77 per cent for pedestrian protection and 70 per cent for safety assist. On top of that, the C-Class’ Attention Assist (which keeps an eye on how drowsy you’re getting behind the wheel) and its pre-crash Pre-Safe system (which puts all of the car’s systems on high alert when it detects that a crash is about to happen) received NCAP’s Advanced Rewards recognition.

In terms of active safety, the C-Class can also be equipped active lane keeping with steering assistant, Distronic Plus radar-guided cruise control, which can also take over all the driving when in stop-start traffic, BAS Plus autonomous emergency braking with pedestrian detection, a 360-degree camera system for low-speed manoeuvring, a blind spot monitor, and full LED lighting. The Mercedes me connect system also calls for the emergency services if you’ve had an accident.

In many ways, the best model is the basic 1.6-litre C 200 d diesel. Sourced from Renault it might be (Mercedes has a technology sharing agreement with the French car maker), but it’s quite smooth, decently frugal and has, with 136hp and 221lb ft, just enough thrust to keep you interested. The larger 2.1-litre 220 d has a much more satisfying 170hp and 295lb ft, but it is significantly noisier than the 200 d. You just have to make your mind up – more power or more silence? All that goes ditto for the 204hp, 369lb ft C 250 d. Worth noting though that the 220 d gets the option of the 9G-tronic automatic gearbox, which is superior to the seven-speed transmission of the C 200 d.

The C 300 h hybrid diesel is at least a useful touch more refined around town, although the noise of the diesel engine cutting in and out can be irritating.

The petrol engines are solid, if a touch unremarkable by the standards of the class, but you should certainly consider a basic C 200 if you’re covering only low mileages or the impressive C 350 e plugin hybrid if most of your miles are covered in town.

There are also Premium and Premium Plus packs. Premium includes ambient lighting, keyless entry and ignition, a memory pack for the front seats, and a panoramic glass roof. Premium Plus includes all of that, plus a Burmester stereo system and the Comand online infotainment pack, which comes with the bigger 8.4-inch screen, online connectivity and a Wi-Fi hotspot.

Not Mercedes’ smallest car, but the C-Class is quite compact overall, and shouldn’t present any major difficulties in tight spaces.

The cheapest C-Class diesel, the 1.6-litre C 200 d, has official fuel economy of 65.7mpg, which is pretty impressive. More impressive still, you should see a good chunk of that as realistic day-to-day economy when actually driving the car. The larger 2.1-litre C 220 d has an identical figure of 65.7mpg for the manual gearbox model, but slightly lower 64.2mpg for the automatic, which is realistically a must-have option. Both cars have impressively trim emissions, but the C 200 d’s 109g/km shows that it’s working harder than the C 220 d, which records 108g/km for the manual, or 114g/km for the automatic. The more powerful C 250 d will return 62.8mpg (and comes only as an automatic) or 60.1mpg with optional 4Matic four-wheel drive. The most frugal diesel is the C 300 h hybrid, which records an official 74.3mpg (you might just crack 60mpg if driven gently around town) and CO2 emissions of 99g/km.

The petrol models also record relatively impressive consumption and emissions figures. The 2.0-litre C 200, in either manual or automatic forms, returns 51.4mpg and 128g/km of CO2, while a C 200 4Matic manages 40.9mpg and 155g/km. Most impressive of all is the C 350 e plugin hybrid, which has on-paper figures of 134.5mpg and 49g/km – but these are of course recorded in a laboratory, and so are rather fictional. You should be able to stretch a fully-charged C 350 e to around 35 miles on just electric drive though, so it’s a good choice for town-dwellers or those with a short commute.

The C-Class has been recalled on several occasions, for items such as stalling engines, faulty side airbags and passenger airbags, unsecured seats, oil leaks, fuel leaks, and even a fire risk. That may suggest a lack of overall reliability, but that doesn’t gel with most people’s experience. In general, Mercedes build quality is among the best (now that the firm has recovered from its early-2000s nadir) so we wouldn’t expect major problems to occur.

Since when has any new Mercedes ever been cheap to buy? The C-Class starts at just over £30,000 on-the-road, which is reasonable for the class, but you’re going to at the very least want to upgrade to the automatic gearbox, and you can easily double the list price by diving too deep down the near-endless list of optional extras. A Sport model with the Premium Plus pack seems about the sweet point of the range, though.