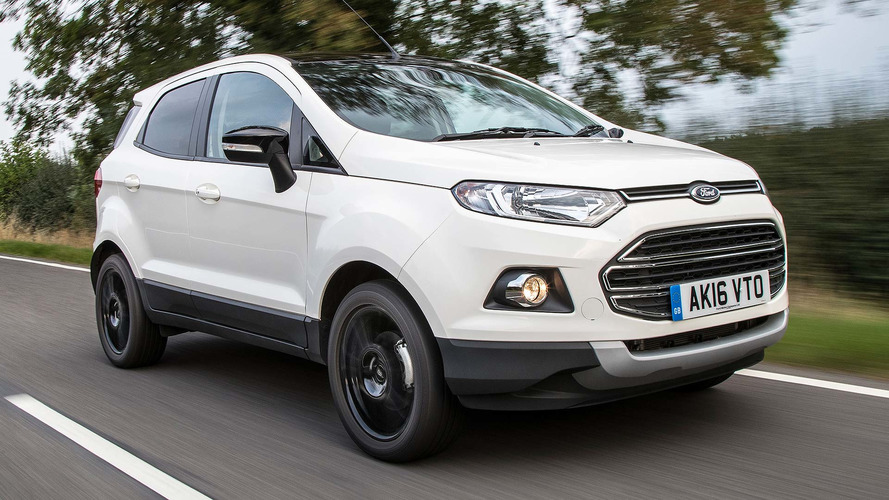 An average car with ungainly looks

Developed under Ford's global car strategy, the Ecosport compact SUV recorded its highest UK sales in 2016 with 15,368 registrations – up 35.8% compared with 2015. Designed in Brazil and based on the sixth generation (2008–2017) Ford Fiesta platform, it was launched in the UK in 2013. The reception was… underwhelming. Two years later it received ‘enhancements’ including styling upgrades, improved driving dynamics and new equipment.

Did you know The Ford Ecosport is currently built in Brazil, India, Thailand and Russia. UK-bound Ecosports are assembled at Ford India’s plant in Chennai.

Such is the popularity of SUVs and crossovers, just about any car that fits into the mould will sell. The dated Ford Ecosport is one such vehicle. Arguably conceived more with emerging markets in mind, it’s now found itself competing globally with some of the best compact crossovers out there, including the Honda HR-V and Mazda CX-3. And yet, the Ecosport is at best a very average car with ungainly looks, poor refinement and little driving finesse. Apart from a reasonably spacious cabin, it has few redeeming features.

The Ecosport divides opinion. It wouldn’t sell if everybody disliked its looks, but to many it’s an awkward baby crossover. Short and tall with a stubby front end and high waistline, it has a shrunken, uglier Kuga-like profile. One thing’s for sure – it’s not cute and it hasn’t got a redeeming smiley face.

That said, it does offer decent ground clearance, meaning it can tackle reasonably rough terrain without scraping the underside. There’s also little overhang at the front and rear, which – on paper – should make it an ideal SUV. It has a wading depth of 550mm.

Thankfully, Ford dispensed with the spare wheel on the tailgate for the car’s mid-life facelift, although it’s still available as an option. Unfortunately, the door still opens sideways (both so 1990s). Quite why it’s called an Ecosport is also puzzling. Yes, its engines are efficient, but ‘sport’? Really?

“Comfortable seats, always with a great view” – these are the aspects of the interior that Ford focuses on. To be fair, the seats are comfortable, with built-in lumbar support and six-way adjustment. Clearly, they also provide an elevated view of the road, while heated driver and front-passenger seats are available if you opt for the £450 Winter Pack

Elsewhere, the interior is pretty similar to the Ford Fiesta, on which the Ecosport is based. Sadly, the design looks out of date – especially the centre console, which boasts a forest of buttons and a tiny Ford Sync infotainment system. Generally speaking, there are still too many hard plastics.

The Ecosport’s height means there is plenty of headroom inside, for those in the front as well as back-seat passengers. Legroom is pretty decent, too. However, the rear-door openings are fairly narrow and a fifth passenger in the centre of the back seat might feel cramped.

The side-opening rear door means you have to leave plenty of room behind the car when loading, but at least there’s a tiny load lip and a flat boot floor. Luggage space is modest, although the 60:40 split-folding rear seats are rake-adjustable and a ‘tip and tumble’ system is utilised, meaning it’s easy and quick to create more room. There are also plenty of smaller storage spaces – 17 compartments in all.

As standard, the Ecosport comes with, Bluetooth, a USB port and six speakers. However, the infotainment screen is just four inches across and some distance from the driver’s eyes. Sony Navigation with DAB digital radio is available as a £400 option.

The Ford Sync system also enables you to use voice commands to play songs from a USB or MP3/iPod, or stream music from a Bluetooth-compatible phone. The system even reads your incoming text messages aloud.

Go for a Titanium and Titanium S and the Ford Keyfree system is available. It senses the presence of your key fob, even if it’s in your pocket or bag, and the doors unlock. It’s then just a case of hitting the starter button and you’re away.

There are various functions incorporated within the steering wheel, while climate control allows you to select the temperatures you and your passenger prefer. On the entry-level Zetec, climate control is part of the Winter Pack, which also includes a heated windscreen, mirrors and front seats.

Other driver aids include anti-lock braking (ABS) and electronic brake-force distribution, to ensure braking is more controlled. Emergency brake assist also helps the Ecosport stop more effectively. It does so by sensing how much braking pressure you’ve applied and automatically increasing it if needed.

There’s also a tyre pressure monitoring system, which lights up an icon on the instrument panel if there’s a puncture. An optional rear-view camera is available, too.

The 95hp diesel is our pick, offering a decent mix of fuel economy and performance. There’s plenty of grunt, its CO2 emissions are a lowly 115g/km and it can reach 62mph in 14 seconds – but feels swifter. The diesel is harsh under acceleration, but settles down when cruising. No complaints about the five-speed manual gearbox either.

The 1.0-litre three-cylinder petrol Ecoboost engine is available with either 125hp or 140hp and, again, is mated to a five-speed manual transmission. Both have 0-62mph times around the 12-second mark, and neither seem as impressive as they are elsewhere in the Ford range.

Finally, the 112hp 1.5-litre petrol engine can be specified with a manual or six-speed Powershift automatic ’box. Both emit 149g/km of CO2 and can reach 62mph in 13.3 and 13.1 seconds respectively.

Ford has a reputation for building good-handling cars, but sadly Ecosport is at best average. Just like the Fiesta, the steering is direct, but the ride is disappointing. It rolls in corners and cabin noise is very noticeable.

According to official crash testing by Euro NCAP, the Ecosport scored highly for adult occupant protection. Child occupants fare slightly less well, with a score of 77%, and it’s let down by poor scores for pedestrian protection (58%) and for safety assistance (55%). This resulted in an overall four stars, which is disappointing when a full five stars is usual.

The Ecosport comes with driver, passenger, curtain and side airbags, as well as a driver's knee airbag – all fitted as standard. Anti-lock brakes (ABS) and emergency brake assist also help the Ecosport stop more effectively.

In the unlikely event of an accident, where the airbag is deployed or the fuel-pump deactivated, a direct call to the emergency services will be made for you via Ford Sync.

The Ecosport is available in seven colours, including the vibrant Kinetic Blue, Bright Yellow and Mars Red, plus the more traditional Diamond White and Panther Black. Given the car’s divisive styling, it’s probably best to go for it and choose a bright colour. Interestingly, Bright Yellow is the only standard colour: all the rest add between £250 and £620 to the bill.

Apart from choosing different wheels and roof bars, or opting for the rear-mounted spare wheel, there’s little in the way of personalisation available for the Ecosport. However, if you opt for the most expensive Titanium S trim you get black alloy wheels, a painted black roof, black mirror surrounds and rear privacy glass

Clearly, it’s worth paying extra for the top-spec if you can. The Ecosport looks much cooler with the contrasting black design elements.

The Ford Ecosport comes with a three-year/60,000-mile warranty as standard, and the package includes a year’s paint defect cover and a 12-year anti-perforation guarantee. The standard warranty can also be extended to four years and 80,000 miles, or five years and 100,000 miles for a one-off payment.

Generally speaking, Ford has a good reliability record. And the fact that the Ecosport is rugged and has been developed with durability in mind should play in its favour.

The Ecosport’s measurements are just what you’d expect from a compact crossover based on a supermini. Rearward visibility isn’t the best, so the rear-view camera option might be worth going for if you have to park in a tight space.

The diesel is the best all-rounder in terms of performance and fuel economy.

Priced between £15,345 for the entry-level Zetec and £17,995 for the range-topping Titanium S, the Ford Ecosport is competitive within the compact crossover segment. However, there are significant rivals around the same price – some bargain-basement like the Dacia Duster and SsangYong Tivoli, plus big-sellers including the Nissan Juke, Renault Captur and Vauxhall Mokka.

The Ecosport in Titanium S trim is also up again basic versions of more modern, well-regarded crossover, such as the Jeep Renegade, Mazda CX-3 and SEAT Ateca. 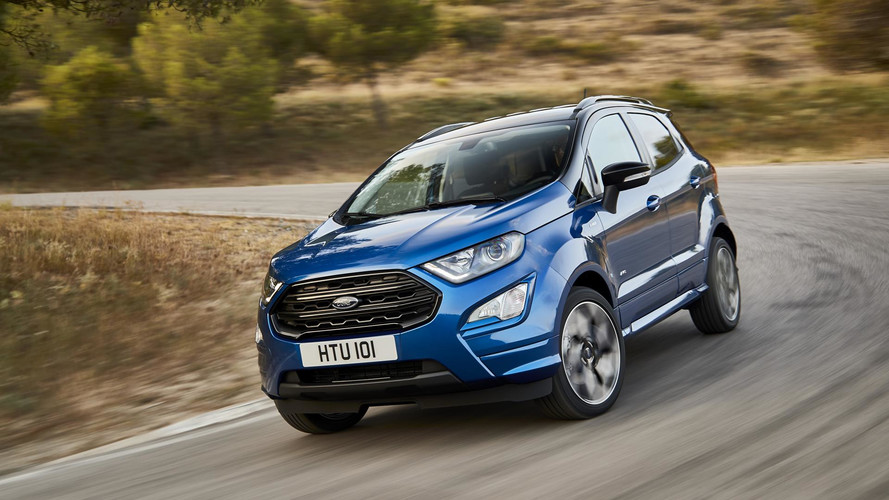