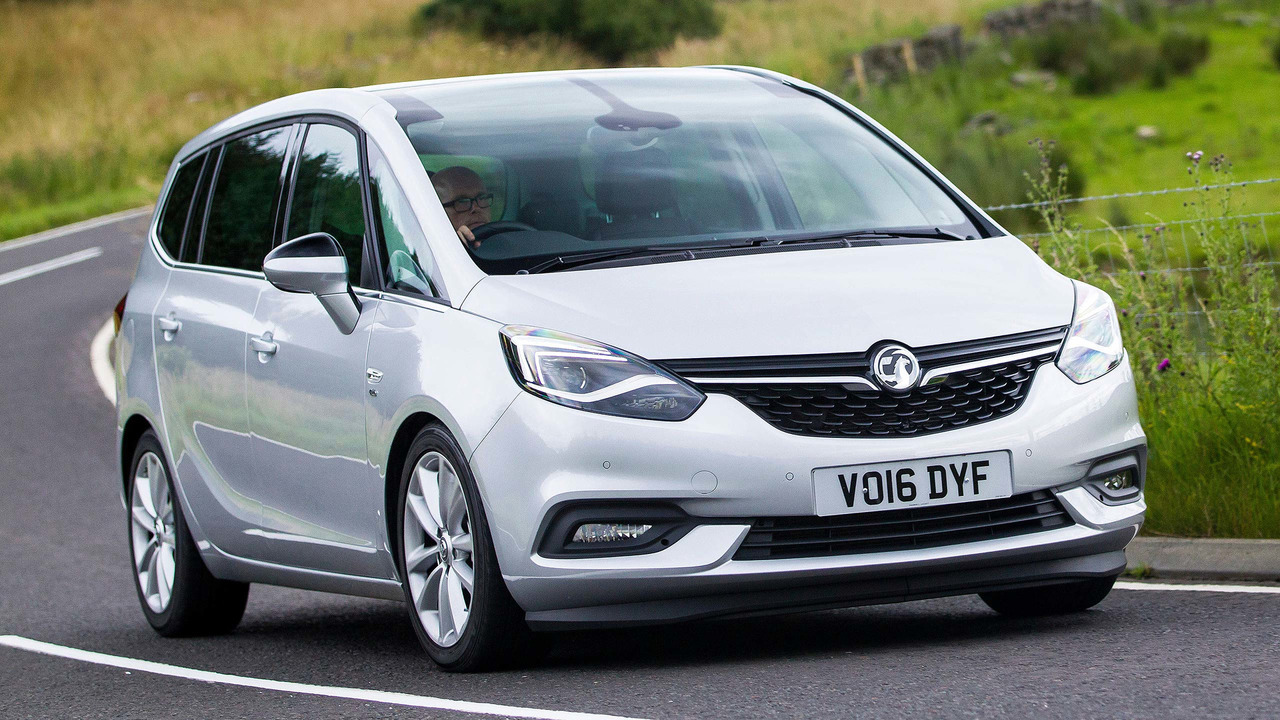 The Vauxhall Zafira Tourer is an MPV in its most traditional sense, offering versatile space for seven in a simple one-volume shape. While this family car body style isn’t as fashionable as the SUV has become, it’s fundamentally more practical, and Vauxhall aims to make up the style shortfall with plenty of useful infotainment and safety gear.

Did you know? The Zafira Tourer has two shark design ‘Easter eggs’ hidden in its cabin. There are similar quirks in the Corsa and Adam.

It’s easy to underestimate a car that is simply built to do a job. It’s also easy to underestimate the challenge involved in building a good seven-seater, but fortunately Vauxhall hasn’t. The Zafira Tourer is designed for a straightforward purpose and, unsurprisingly, it proves straightforward to live with thanks to a spectrum of useful technologies, an improved interior and plenty of space. The fact that it drives reasonably well just improves the deal.

Any mainstream MPV is going to fare badly in the image and style stakes. The Zafira Tourer is trying a little too hard to add a sporty edge to its exceptionally bland shape, and it doesn’t really work. On any Friday in any nightclub there’s always a middle-aged man dressed like he’s 18, attempting to mix with people half his age, and the big Vauxhall comes dangerously close to that image.

This is potentially an unavoidable problem with the Zafira Tourer, because higher trim grades bring larger, more aggressively-styled alloy wheels that make the car look a bit incongruous.

Vauxhall can’t make any claims to a premium or particularly desirable brand image, but in its favour is general familiarity and brand awareness. It’s not unlikely that people who learned to drive in a Corsa before buying their own Astra might look favourably on the Zafira Tourer if they need more space.

Thanks to a recent mid-life update, interior quality has gone up. There’s a certain tightness about the dashboard that tends to loosen over time and mileage, but the interior is stylish, with a dominant black interspersed with silver accents even on entry-level trim grades. It looks more expensive than it feels.

The control layout should feel intuitive to the vast majority of drivers. The main systems are split between traditional buttons and dials, and the excellent touchscreen at the top of the centre console. It’s worth noting that some trim levels make do with a more basic interface, though.

Arguably the key practicality feature here is the seven-seat arrangement, which can be dropped to five seats with a simple folding mechanism to collapse the third row. Doing so reveals an impressive 710 litres of luggage space. Ahead of all that, the middle row of seats is made up of three independent chairs that can each move forward and back to adjust the legroom bias.

Big rear doors and a high roof make it easy enough to install child seats – and the children themselves – but there are only child-seat mounting points on the outer rear seats. There are large storage bins dotted around the cabin, including a central bin between the front seats that moves on rails to double as an armrest.

Cruise control is standard on all models, and so are front and rear parking sensors – a thoughtful touch from Vauxhall. As well as the touchscreen interface, climate control replaces manual air conditioning about half-way up the range.

DAB radio with AM and FM frequency reception is good, and an Apple iPod can be controlled via a USB port and the main screen. Bluetooth is also standard, as is compatibility with Apple CarPlay and Android Auto. There’s no CD player, though.

Higher trim grades enjoy the likes of automated headlights and windscreen wipers, plus an automated main beam-assist that switches to dipped headlights when it sees other traffic. Some also have a panoramic sunroof with an electrically-operated sun blind.

More interesting is Vauxhall’s OnStar service, which is free for a year and can connect owners via a mobile phone to an advisor in the event of a crash or breakdown. An operator is even on hand if you simply can’t figure something out about the car. It includes a wifi hotspot, but that element is only free for three months (or 3GB of data) from new.

This is a long, tall and reasonably heavy car, not predisposed to good handling qualities. Nonetheless, the over-light steering is accurate and the soft suspension actually feels right beneath the large body, calmly controlling body-roll without becoming jarring. If you really pick up the pace, the Tourer can become bouncy – but that’s to be expected.

The 1.4-litre turbocharged petrol engine is sweet and eager, but needs to be worked hard. The diesels are more relaxed, but while the 1.6-litre 134hp unit is by far the quietest, smoothest and best all-rounder, the comparatively gruff 2.0-litre 170hp upgrade is better for carrying heavy loads, be it people or luggage.

A respectable balance of power and handling perfectly suited to a seven-seat MPV is what you can expect from the Zafira Tourer.

As well as the reassuring backup provided by the OnStar system, the Zafira Tourer scores well for both active and passive safety. The current car hasn’t yet been tested by Euro NCAP, but its largely identical predecessor scored a maximum five-star rating, including 94 percent for adult occupant protection and 86 percent for its safety assist systems. The facelifted car is only likely to improve.

Unfortunately, the car lacks a spare wheel. One can be specified as an option, but a tyre inflation kit is the standard post-puncture solution. LED daytime running lights are more visible than halogen alternatives, and are standard across the range.

The only free colour choice is the sad-looking Royal Blue, which does the car no favours. Lava Red and Summit White are £285 options, but still flat. The metallic palette is uninspiring at best, spanning Mineral Black, Satin Steel Grey, Dark Caramel, which is a desperately unappealing brown, Cosmic Grey, Sovereign Silver and Flip Chip Silver. The three pearlescent options are Dark Sea Blue, Macadamia and Emerald Green.

Arguably, Flip Chip Silver is the colour that suits the car best, neither trying too hard nor failing to try hard enough. It’s the simplest option and probably the classiest.

Vauxhall’s trim ranges are somewhat confusing, not following a linear scale. They pick and choose components based on an overall bias, with SRi acting as the cheapest ‘sporty’ grade and SE offering a similarly-priced alternative biased towards comfort and technology.

Design is the entry-level, but still comes with cruise control, a touch-screen interface, an eight-way adjustable driver’s seat and the same suite of media and connectivity options as the rest of the range. Tech Line provides integrated navigation on top of a basic spec, while Energy adds a few aesthetic extras and a better infotainment unit.

Elite represents the top end of the trim range, adding extras like ambient LED lighting, automated lights and windscreen wipers, dual-zone climate control and more. A panoramic sunroof is limited to Elite spec, as is a special ergonomic driver’s seat with 16 ways of adjustment.

Despite Elite technically being the best-equipped model, sat-nav isn’t standard. But Elite and SRi are two of Vauxhall’s best-selling trim grades across all their applicable models, so both are offered here with a navigation upgrade.

For Elite, this just adds to an already impressive specification, while for SRi it forms a specification highlight on a trim grade focused mainly on aesthetics.

The Zafira Tourer is a big car, being a lengthened version of an already substantial MPV. The length should be accommodated in most single garages, barring obstructions against the wall, but the 2.1-metre width means that it would be tight fit through the door. Folding the mirrors in makes things easier, but in a medium-sized garage there will only be about 40cm either side of the car for doors to open into.

The 1.4 petrol does quite badly for fuel economy, especially with the car loaded up with passengers or cargo. Even so, it’s well suited to an urban life where fuel economy will generally be low in any internal combustion-engined car. Its smoothness, faster warm-up and absence of particulate filter make more sense, as does the relatively low purchase price.

The diesels do better, officially averaging 62.8mpg and 57.7mpg respectively for the manual versions, but that’s likelier to be the efficiency range to expect on a long drive rather than an average.

Tyres could be expensive. Mid-range brands start at £70 per corner before fitting costs for the Zafira Tourer’s 17-inch wheel set, rising to £120 per tyre for the largest (19-inch) cost-option wheels. Emissions drop as low as 119g/km, but thanks to standard safety equipment, insurance should be reasonable.

The only official recall for the Zafira platform in its current guise was a tiny one affecting the steering on just a few cars built during one week in April 2016. Vauxhall is usually in the lower reaches of reliability surveys, but the latest models seem to be on an upward trend.

Less than £18,700 for a seven-seat Vauxhall MPV sounds extremely reasonable, considering the standard level of equipment is very good. There is a huge price disparity between that 1.4 Turbo Design and the Elite Nav, with the latter almost £7,000 more expensive, at a starting price of £25,495.

That’s actually not bad value for a fully-kitted-out seven-seat MPV in today’s market, and buyers are in a strong position to haggle.