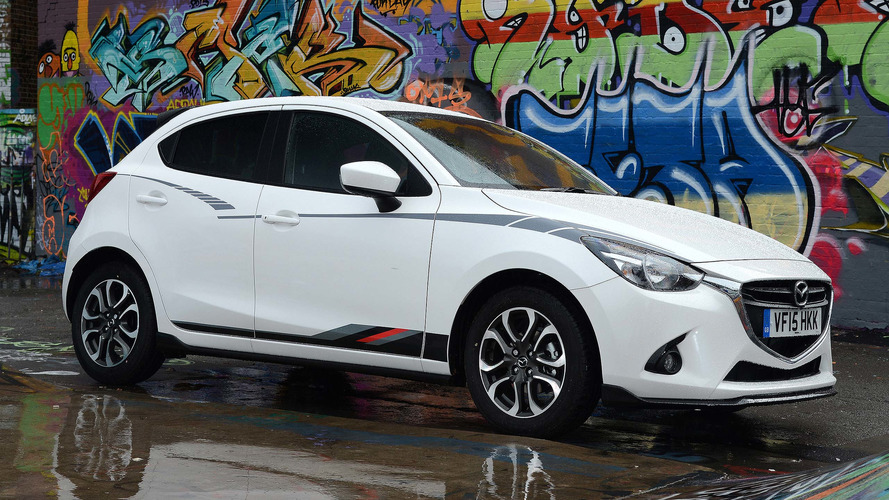 Mazda is very good at building compact, lightweight cars that still feel solid. The Mazda 2 supermini, which is a direct competitor for the Vauxhall Corsa and Ford Fiesta, is no exception. It competes in a very busy part of the car market and uses style, solidity and equipment to its advantage. It’s surprisingly light, so it also drives very well.

Did you know? There’s an unusually large difference in wheelbase between the current and previous cars, at 80mm, which makes the newer Mazda 2 appreciably more spacious.

The Mazda 2 is a highly underrated car, combining intelligent construction techniques with great style and lots of equipment. Manual versions are particularly good to drive thanks to a fast-responding normally-aspirated engine and a sweet, enjoyable gearshift action. Every version is very fuel-efficient and comfortable. It’s a shame the wheels are universally smaller than aesthetic ideals would like, but at least the silver lining is better ride quality. It’s hard to find any major faults.

Half a star has to be removed for the small-wheel epidemic across the range, but otherwise the Mazda 2 is one of the very prettiest superminis. Imagine a world-famous supermodel with legs only two-thirds their usual length. Ignoring the wheels, the body’s proportions are good, the glass-to-metal ratio is perfect and the front grille is simple and stylish, instead of overbearing or ugly.

The headlights are designed to mimic the eyes of birds of prey, and they’re actually pretty convincing. Its front end is enduringly smart, the rear is equally well conceived and the side profile gives it a cabin-rearward, coupe-like shape.

When Mazda developed the 2, it insisted that interior quality would have to match its larger cars, and it does. Apart from flimsy-feeling, lightly-weighted control dials on the centre console, the interior both looks and feels a cut above the norm.

The instrument cluster has wonderful style and purpose, using a large, central, red-rimmed rev counter, with a digital speedometer beneath it. Two digital screens either side of the rev counter display things like trip computer data, fuel tank status, outside temperature and the odometer. Amazingly, there’s even a head-up display option.

On higher trim grades the leather contact points and contrasting stitching are vastly higher quality than most rivals provide, and the same goes if full leather upholstery is specified. Even better, the controls are intuitively laid out, with everything you need within easy reach. Only the CD player positioning can prove a little awkward, as the gearlever is just slightly in the way.

The 280-litre boot offers little more room than the most practical city cars a size smaller than the 2, but is typical for the class. At 960 litres maximum, it actually has just one litre more than the much smaller Volkswagen Up does.The rear seats fold in a 60:40 split, but not down to the level of the boot, so there’s no large or flat load area beyond the boot floor itself.

There are Isofix mounting points to allow appropriate child seats to be fitted easily, but the boot is devoid of hooks, lashing points or cargo nets. It does have a light, and also a significant load lip – normal for this size of car, but it does make lifting heavy bags in and out harder.

Otherwise, the cabin can hold slim drink bottles in the front doors and a couple of wider bottles or cups in the centre console. Taller drinks will interfere with your arm or elbow when changing gear.

Keyless entry, climate control and cruise control are among the spec highlights in higher trims, but even the most basic SE gets air conditioning, a start-stop button and front electric windows.

Other kit bonuses at the top of the range include automatic headlights and wipers, rear parking sensors, an upgrade to LED daytime running lights and a seven-inch colour touchscreen display. Integrated navigation is commonplace, but limited to the trim levels with the ‘Nav’ suffix, as well as featuring on the several special editions Mazda currently offers.

The navigation unit is a real highlight, being simple to use without any instruction and following a simple, self-explanatory menu structure. But even on cars without it, engine stop-start is standard, helping to save fuel during long halts in traffic.

On the face of it the Mazda 2 has no particularly powerful engines, but an amazingly low weight of just 975kg means it doesn’t need lots of power to feel alert and sprightly. In town, the car feels well at home, leaping away from a standstill with enthusiasm.

It’s just as enjoyable on the open road, where its light but accurate steering demonstrates more feel than expected. The front wheels turn in with bite and speed, giving the 2 a real sense of sportiness and adventure. The petrol versions are like a puppy, eagerly springing around and egging you on to explore the next street.

Arguably, the heavier 1.5-litre diesel engine has little place in the range. Only available in a single 105hp guise, it gives the Mazda real mid-range muscle to play with, but it’s not as responsive or immediate-feeling as the petrols. It does give the car longer legs and better efficiency, but with petrol engines that can return 50mpg, alongside being able to hit 62mph in 8.7 seconds, the diesel just seems superfluous.

It’s fair to say that Mazda must be a little disappointed with the four-star rating granted by Euro NCAP. An anomaly in the scoring system means that while its scores are consistently high across the board for adult, child and pedestrian protection, its active safety systems are judged to be lacking.

That seems thoroughly unfair, given that six airbags, stability and traction control, hill-hold assist and an emergency-stop signalling system are all standard on the cheapest version. Higher up the range are lane-departure warning, autonomous low-speed braking and more. The test cars used by Euro NCAP may have been to a lower EU market specification, because UK cars are at least as well-stocked with safety kit as any of their competitors.

The red you always see Mazda cars in is called Soul Red, and it’s the most expensive optional shade, at a rather steep £660. Arctic White is free but looks terrible on the car, while Aluminium Silver is the only traditional metallic and Snowflake White is the sole pearlescent.

Mica paints are similar to pearlescent ones, with a different kind of sparkle to metallics. The mica colours are more numerous and interesting, including Dynamic Blue, Smokey Rose and Metropolitan Grey. Less good for the Mazda 2 are Black Mica and Deep Crystal Blue, also in mica. All metallic, pearlescent and mica optional paints are priced at £540.

There is a slightly confusing mish-mash of trim grades starting with the three core levels: SE, SE L and Sport Nav. The latter always comes equipped with satellite navigation, as its name implies. SE covers just the key bases, with air conditioning among its standard equipment.

Sport Nav adds a host of aesthetic upgrades on the outside of the car, plus automation for the headlights and front wipers. Keyless entry becomes standard, too.

Two special editions are offered, although there are two colour variants of the more expensive one. The first –and cheaper – one is called the Red Edition. Based on the SE L trim, it adds a bespoke rear spoiler and underskirt, both in Soul Red regardless of the body colour. It gets red cloth seats and trim inserts, with red and white interior decoration, all for an extra £900.

The Sport Black is limited to pearlescent white and Mazda’s signature red, and is priced identically to the Sport Nav 90hp model. However, it switches features like keyless entry and climate control for a Sports Aero bodykit, Soul Red paint some red exterior trim highlights.

Mazda’s supermini follows pretty typical standards for its dimensions. It’s easy to manoeuvre around city streets and will happily slot into just about any garage with room to spare.

Mazda has limited the available engine choice to just two. There are three versions of the same 1.5-litre petrol, and a single iteration of a 1.5-litre diesel. By only developing two engines the company has been able to extract the absolute maximum potential, resulting in fuel economy that betters just about any competitor in the real world.

Even the most powerful version of the petrol unit achieved more than 56mpg in official testing, and as a normally-aspirated engine it should return real-world figures much closer to the official numbers than turbocharged competitor engines can. The Ford 1.0-litre Ecoboost is a particular villain on that score.

Costs for key consumables are low, thanks to those small wheels and corresponding brakes, which don’t need to be large because the car is so light. Insurance is competitive, but the groupings are not the lowest in the class.

Two official recalls are listed. One dealt with a steering fault in cars built between December 2012 and October 2014, while another addressed a potential fuel leak in a small batch of Mazda 2s built in January 2015. Mazda generally ranks well for reliability, not quite matching Lexus, Toyota and Honda, but beating all major European mainstream and premium brands.

The range starts with SE at £12,595, but the amount of difference between that and the top-spec cars is just £3,000, and there is an awful lot of equipment included in that. The trim grades that buyers really want – SE L, Sport Nav and the special editions – look much better value than the cheaper cars.

The Red Edition costs £14,995 and the Sport Black is £15,595. Prices like these make high-end versions of the Ford Fiesta look very expensive indeed.