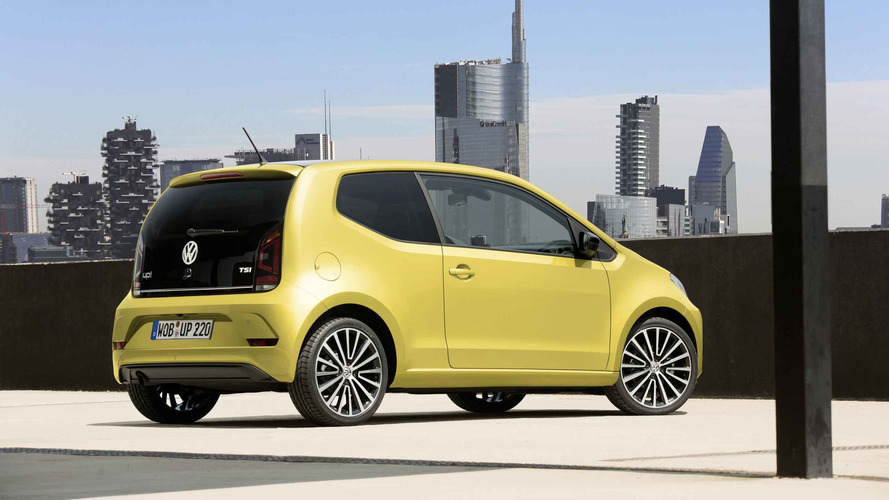 A small car, with a big heart.

The Volkswagen Up is the smallest car in the company’s model range, but still carries the same high standard of finish as seen in its other cars. In the UK there's a choice of three- and five-door body styles, three different petrol engines, and even an all-electric version, plus a wide variety of personalisation options. Combine all this with a refined drive, and it is easy to understand why the Volkswagen Up is one of our favourite small cars. Under the exterior styling it's almost identical to the Seat Mii and Skoda Citigo, both of which arrived later, but the Up is the authentic original.

Did you know? The Volkswagen Up idea began as a concept car with a transverse rear engine, like today's Renault Twingo and Smart ForFour.

The Volkswagen Up was designed as part of a three-pronged approach to the city car market, along with similar offerings from Seat and Skoda, but the Up has always been the most upmarket version. It was set further apart by the introduction of a more powerful 1-litre TSI engine in 2016, giving it better performance at higher speeds. The interior is simple in design but is as well-finished as those in most other Volkswagen models. Comfortably able to seat four passengers, the Up gains practicality when in five-door form without affecting the car’s overall compact size. Its competition is improving, though, so the Up doesn’t get it all its own way. Both the Hyundai i10 and the Ford Ka+ offer good packages in a similarly small size, albeit without the same design flair or interior quality.

To maximise interior space, Volkswagen has essentially made the Up as boxy as possible, but it has still managed to keep some stylish lines in its design. Overall there's a classy simplicity to the design that makes the car stand out from some fussy rivals.

We think the five-door looks every bit as good as the three-door, and there are many different personalisation options to make it look unique. Choose wisely if you’re concerned about future residual values, though.

There are 13 exterior paint colours to choose from, 15 different wheel designs, and numerous exterior sticker packs. Inside, there is just as much choice, but regardless of which of the eight upholstery options you decide on the slim front seats offer plenty of support. The Up is slightly taller than its bigger sibling, the Volkswagen Golf, which means it has larger glazed areas that add to the good levels of all-round visibility.

Considering that it carries a fair price premium over many of its rivals, it shouldn’t be surprising that the interior of the Up looks and feels very well finished. When Volkswagen updated the car in 2016 a restyled dashboard was introduced, with a more modern look to its centre console.

While there are numerous ‘dashpad’ panels that can be specified to brighten up the dashboard fascia, even the standard black panel looks good. The driving position offers a good degree of adjustability and visibility as well, while thin doors add an extra few millimetres of elbow room and, thanks to that boxy shape, rear headroom is fine even for adults.

Despite it being small, the Up is a worthy companion for a long-distance journey. You might miss some big-car comforts but it is stable on the road and keeps up with traffic well.

Choosing the five-door model will make life for rear passengers much easier. The lack of a third rear seat belt isn't unusual in the class, but will certainly put some off. Also restrictive is the boot which, at 251 litres, isn’t exactly cavernous. Although deep it is also quite narrow, and it can't accommodate much more than two overhead compartment-sized suitcases. Folding forward the rear seats takes just seconds to do and grows the usable space to 959 litres, though it’s still not the ideal car if you’ve got to move house.

It’s better news in the front of the cabin where large storage areas in the centre console, including a cup holder, give plenty of space for oddments. The doors also have generously-sized storage bins to hold bottles of water, for example.

With the exception of the entry-level Take Up specification, all Up models are fitted with a leather-trimmed multifunction steering wheel, a five-inch colour touchscreen featuring a DAB digital radio receiver, an aux-in socket, an SD card reader, USB connectivity and a Bluetooth connection for telephone and audio streaming.

An additional phone navigation interface is available as an option on Move Up models and is standard on all versions above this. Basically it's a plastic phone holder with USB connection that holds your smartphone in view, and through Volkswagen’s 'Maps + More' app for Apple and Android systems can display free satellite navigation via TomTom. Other features include an instrument display able to show real-time driving data and a ‘Think Blue Trainer’, which is designed to teach more economical driving habits.

On the face of it, the Up has plenty of fancy tech to compete with rival cars, and phone-based systems mean you can use your satnav app of choice to get around. But if you didn't have a fancy phone capable of using the Volkswagen apps you'd probably feel rather short-changed.

How much fun you have driving the Volkswagen Up depends on which engine you choose. There are two versions of Volkswagen’s naturally aspirated 1-litre three-cylinder petrol unit for starters, producing 59 or 74bhp. The 59bhp engine lacks performance, but is fine when driven mainly around the city. It is only available in the entry- and mid-level models with either five-speed manual or five-speed automatic transmissions. The Up's light steering and compact size, with the wheels pushed out to each corner, makes it a cinch to drive around town.

The more powerful 74bhp engine has the same 70lb ft of torque as the entry-level engine, but that extra 15bhp gives it a tangible edge especially when you venture onto the motorway on the odd occasion. It can deliver a bit of driving fun too, and has a characteristic three-cylinder thrum when revving. Given that the Up weighs only 929kg, it doesn’t have to be worked too hard to keep up a healthy pace.

However, the real star of the range is the 89bhp 1-litre TSI engine, which gives the Up’s chassis a proper chance to show just how capable it is. In conjunction with 118lb ft of torque, that added power is most welcome on the motorway. The engine sounds more refined, too, but it does have a little less aural character than the 74bhp unit.

The little Volkswagen handles surprisingly well and always feels reassuringly surefooted, in spite of its low weight. Its suspension soaks up most surface imperfections with ease, though that is dependent on the wheel size fitted. You can get up to 17-inch wheels, but we recommend sticking to 15- or 16-inch options for that extra comfort.

If you prefer battery power, the e-Up can allow you to silently cruise around town without any emissions. It's nippy enough, but not the most impressive of electric cars.

We're very much looking forward to driving the new Up GTI that's coming in 2018...

All versions of the Volkswagen Up feature the standard safety systems such as Electronic Stability Control (ESC), Electronic Differential Lock (EDL) and traction control. The rear seats each contain Isofix points and all seats feature a seat belt warning buzzer if a belt is unfastened.

A useful City Emergency Braking system can be added as a pack, which includes a front passenger’s airbag deactivation switch, automatic headlights and rain sensor. We think it's a great add-on, but it is unfortunate that Volkswagen has decided to fit this as standard only to the electric e-Up.

On all Up models the standard colour is non-metallic Tornado Red. Across the Take Up, Move Up and High Up models there is the choice of four other non-metallic colours: Coral Red, Candy White, Pure White and Teal Blue. Metallic colours consist of Costa Azul and Honey Yellow, while the two premium signature paint choices are Savanna Gold and Habanero Orange. There is also a sophisticated pearl effect paint called Deep Black. The Up Beats model is available only in Pure White, Tornado Red, White Silver or Deep Black.

There are three main specification grades – and a lot of puns – in the Up range: Take Up, Move Up and High Up. The range starts at £9,135 with the 59bhp Take Up and features a basic specification that includes electric front windows, remote central locking, a composition radio with 3.1-inch display, DAB radio, 14-inch steel wheels with full-size wheel trims and LED daytime running lights.

If you love your music, then the Up Beats will be right 'up' your street. Priced from £10,555, this model comes in three- or five-door versions and wears the Beats logo on the B-pillar. It is available with a unique interior that includes a Beats-branded dashboard panel, red stripes in the seatbelts, and unique grey upholstery specific to the model. An eight-channel amplifier with digital sound processor and a 300W seven-speaker system give an enriched sound quality.

It is only possible to specify the 89bhp 1-litre TSI engine with the High Up or Beats trims.

The Volkswagen Up will allow you to squeeze into even the tightest of parking spaces thanks to its compact dimensions. The only thing you’ll need to watch out for is the longer doors on the three-door model, which can be tricky to open if the vehicle next to you is too close.

Even though the 89bhp engine might allow the Up to coast along more effortlessly, it doesn’t return as good fuel economy as the lesser-powered engines in the range. The official figures suggest a combined 60.1mpg, but we reckon closer to 50mpg is a more realistic expectation. Even with the highest emissions in the Up range of 108g/km CO2, the 89bhp engine falls into VED Band B. Choosing the 1-litre engines equipped with Volkswagen's Bluemotion system sees them improve to VED Band A, but the differences are, in reality, negligible. However, you do need to be somewhat restrained with the 59 and 74bhp engines. While their rev-happy nature encourages you to drive them that bit harder, doing so will have quite a big impact on their fuel economy.

The Volkswagen Up has a relatively clean reliability record, helped by the car's inherent simplicity without many of the complex mechanical and electrical systems seen on larger cars.

When it comes to servicing the recommended intervals from Volkswagen are once a year or every 10,000 miles, whichever comes first. If you are more sympathetic in your driving style Volkswagen also offers flexible servicing, which can push out the service intervals if you tend to not drive your car as hard or as far.

Volkswagen provides a three-year/60,000-mile warranty, and it also offers an extended warranty that can be purchased from one to five additional years or up to 90,000 miles.

With the Up starting at £9,135 for its most basic version, it is close to £1,000 more expensive than some of its other rivals in what is a very price-sensitive segment.

The price jump between the various trim lines isn’t too costly, though; the gap from Move Up to High Up is the biggest of the price leaps, at just under £1,600. Adding the 89hp engine to the High Up model commands only a small premium, so if you’re already considering this version, it’s worth going the whole hog and choosing the more powerful and satisfying engine. Where it can get expensive is adding the numerous different personalisation options that are available.