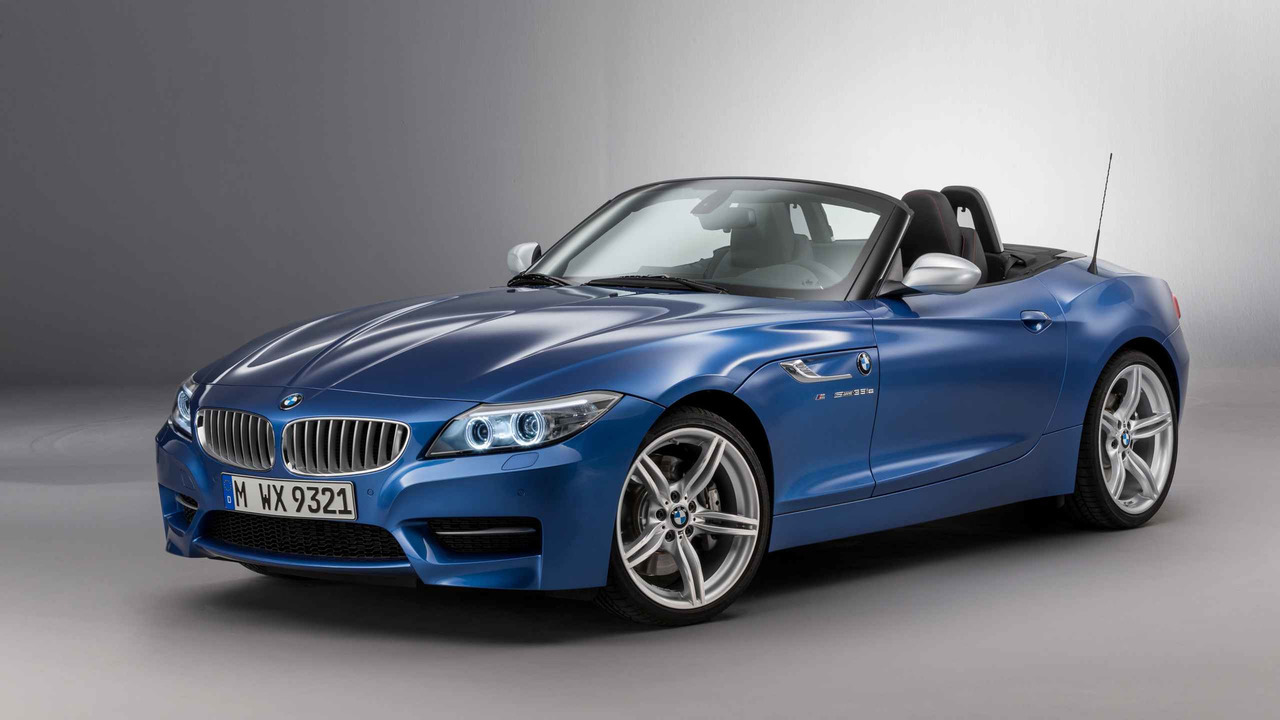 The last of a dying breed.

BMW’s sole remaining conventional sports car is the Z4 roadster. It’s well into its second generation and remains one of the main players in the two-seat premium roadster market, thanks to attractive looks, a quintessential BMW rear-wheel drive chassis, and a strong range of petrol engines. But there are no diesel options and newer models from rivals are leaving the Z4 feeling like it is miles behind the prevailing class standard.

Did you know? The BMW Z4 was chiefly designed by two women – Juliane Blasi did the exterior, while Nadya Arnaout oversaw the interior.

There’s still a lot to like about the BMW Z4, as it’s a good-looking machine with a comfortable, quality interior and it is possessed of the feel-good factor that accompanies driving an open-top car from a premium manufacturer. The engines offered are also punchy and bless the Z4 with strong performance.

But there’s no diesel option offered, and the car has been around since 2009 with little in the way of major changes. When you consider that younger rivals from Audi and Porsche – and even the similarly aged Mercedes-Benz SLC – all drive better, have more tech-laden interiors, and cleaner engines, it becomes apparent that the BMW Z4’s time is drawing to a close. Good as it is, the German is simply outmanoeuvred in too many departments by the opposition.

While it lacks some of the visual drama and crispness of the original Z4, the BMW roadster still draws attention years after it first hit the roads. It has dramatic long-bonnet, short-tail proportions, and BMW’s details like the kidney grilles and quad-lens headlights work well.

One of the BMW’s strongest factors is its folding metal roof, as the newer Audi TT and Porsche 718 Boxster cars have both stuck with fabric hoods. The Z4’s roof can be raised or lowered in less than 22 seconds while on the move at speeds of up to 20mph, and furthermore it makes the BMW a more usable car all year round. There’s certainly no problem with image, either, as this is a hugely desirable convertible car from a prestige manufacturer.

In terms of the fixtures and fittings, the quality levels are high – BMW uses some nicely tactile materials for the major surfaces in the Z4’s cabin. Everything is laid out in a functional manner and there are enough toys to make it feel reasonably up-to-date, but the dials in the instrument cluster and most of the switchgear betray the car’s 2000s-era origins; BMW’s interiors have moved on a long way since the Z4’s cabin was cutting edge. Also, unless you pick the 35-badged models, seat adjustment is manual and the levers aren’t the easiest things to use. At least the super-low driving position makes the BMW feel really sporty from behind the wheel.

Two-seat roadsters are not bought primarily for their practicality, but even so the Z4 has much to recommend it. There are useful storage cubbies dotted about the interior, as well as nets that can hold items in place during open-air driving, while the boot is a very reasonable 310 litres at its most capacious. Sadly, what is a strength for the BMW elsewhere becomes a weakness here, as, if you fold the metal roof away, the cargo capacity is cut to a meagre 180 litres. Mercedes makes a much better job of packaging the SLC’s similar folding metal roof, preserving around 225 litres of space with it stowed.

Bluetooth, Professional Navigation, a DAB radio, Voice Control, BMW Emergency Call and TeleServices, and a multifunction steering wheel with audio/phone controls are all part of the standard equipment list on every Z4. Adding internet capability is less than £100 and you can even display TV services (around £800) on the BMW’s screen. There’s also a 14-speaker, 650-watt BMW Loudspeaker system to boost the audio of the Z4, but as it was conceived in an era before smartphones had took off, don’t expect anything like Apple CarPlay, Android Auto, MirrorLink, or even ‘Qi’ inductive battery charging. Technologically speaking, it feels off the pace.

Great engines, a smooth ride, yet rather uninvolving chassis – that would be the report card for the BMW Z4. The original 2003-2009 car was castigated for its overly firm ride and numb steering, but BMW perhaps went a bit too far the other way when softening off the dampers, as the Mk2 Z4 feels more like a shrunken GT than a sports car. There’s just too much body roll and not enough chassis feel to make piloting any model hugely enjoyable. A Porsche 718 Boxster is in another dynamic league entirely.

However, the driving position in the Z4, way back and low down, does engender some feeling of driving something special and there’s no doubting the potency of the engines. There’s a 2.0-litre TwinPower Turbo four-cylinder motor that comes in three outputs: 156hp as the sDrive18i, 184hp as the sDrive20i and then 245hp as the sDrive28i. Six-cylinder power is available from the 3.0-litre engine in the sDrive35i, with 306hp, which is ramped up further for the range-topping, 340hp sDrive35is.

The Z4 has great ride comfort, if you avoid the M Sport trim – which you won’t, because it brings desirable kit and better looks – and decent noise refinement, emphasising the car’s focus on comfort ahead of fun.

The Z4 again suffers from its age here, as it lacks any significant electronic driver assist systems that you’d find on, for example, the BMW 3 Series. There are four airbags as standard, plus Dynamic Stability Control (incorporating Corner Brake Control, Brake Assist and Dynamic Brake Control, plus Hill-Start Assistant on the 35i-models) and a rollover protection system, but that’s about it.

This is why the Z4 only polled a mediocre three-star Euro NCAP rating, posting pretty poor scores for adult occupant (69 per cent) and child occupant safety (61 per cent), as well as just 46 per cent for safety assist. Strangely, the Z4 has one of the highest scores for pedestrian safety (91 per cent).

Three, which are sDrive, then M Sport, and then sDrive35is, which is a specification in and of itself. The 18i and 20i Z4s can be had with or without M Sport spec, while the 28i and 35i are M Sport only. The sDrive 18i gets 17-inch alloys, single-zone climate, Drive Performance Control, Xenon headlights, and a cloth interior. The 20i upgrades the climate to dual-zone, comes with leather upholstery, and also has rain-sensing wipers and automatic headlights.

The M Sport Z4s get the exterior body styling and sportier interior trim finishes, plus 18-inch wheels. The 35i also features metallic paintwork for free and electric seat adjustment, while the 35is adds Adaptive M Sport suspension, its own design of 18-inch alloys, a louder exhaust, and a 'Sport' steering set-up.

The Pure Traction Design and Pure Fusion Design packages (£550 and £1,250, respectively) sprinkle some desirable styling upgrades throughout the cabin from the Z4’s option lists, including softer Nappa leather in Ivory White for the Fusion bundle.

You might think the sDrive35is would be the one to go for, a pseudo-M Car in sheep’s clothing. But it’s not – the power overwhelms the softly-sprung chassis. Stick to the sDrive20i for the best balance of performance and cost.

Despite their long bonnets, all Z4s are short and compact cars overall.

It doesn’t matter which of the four-cylinder engines you choose, or what gearbox – BMW quotes exactly the same economy and emissions data for all of them, which is 41.5mpg and 159g/km. The six-cylinder engine is less efficient with a manual gearbox, its best returns of 31mpg and 211g/km CO2 found with an automatic. To counter the average running costs, the residual values should be strong, given it’s a prestige BMW product that’s built in relatively small numbers.

With a condition-based servicing system, the Z4 will tell you when it needs to go to the garage to be looked at. As BMW’s service costs are pricey, it’s worth bagging the Service Inclusive pack or Service Inclusive Plus, as these cover, respectively, all servicing costs or all servicing and maintenance costs, for five years and 50,000 miles. If that doesn’t sound like much in term of distance, bear in mind that roadsters do not typically do mega-miles annually.

BMW’s standard warranty is three years and unlimited mileage, which is competitive but not outstanding. It should make the Z4 a bearable ownership proposition, as BMWs are not known for dreadful reliability problems.

Pricing for the Z4 is not especially competitive, given its age. Only one model is less than £30,000 as standard and the sDrive35is costs the best part of £48,000 – considerably more than the Audi TTS Roadster, Porsche 718 Boxster or Mercedes-AMG SLC 43, all of which are better cars. There’s not a huge options list to bump the Z4’s prices upwards and, as already stated, residuals should be strong, but haggle hard at a dealership to get a reduction on what must surely now be a run-out model.