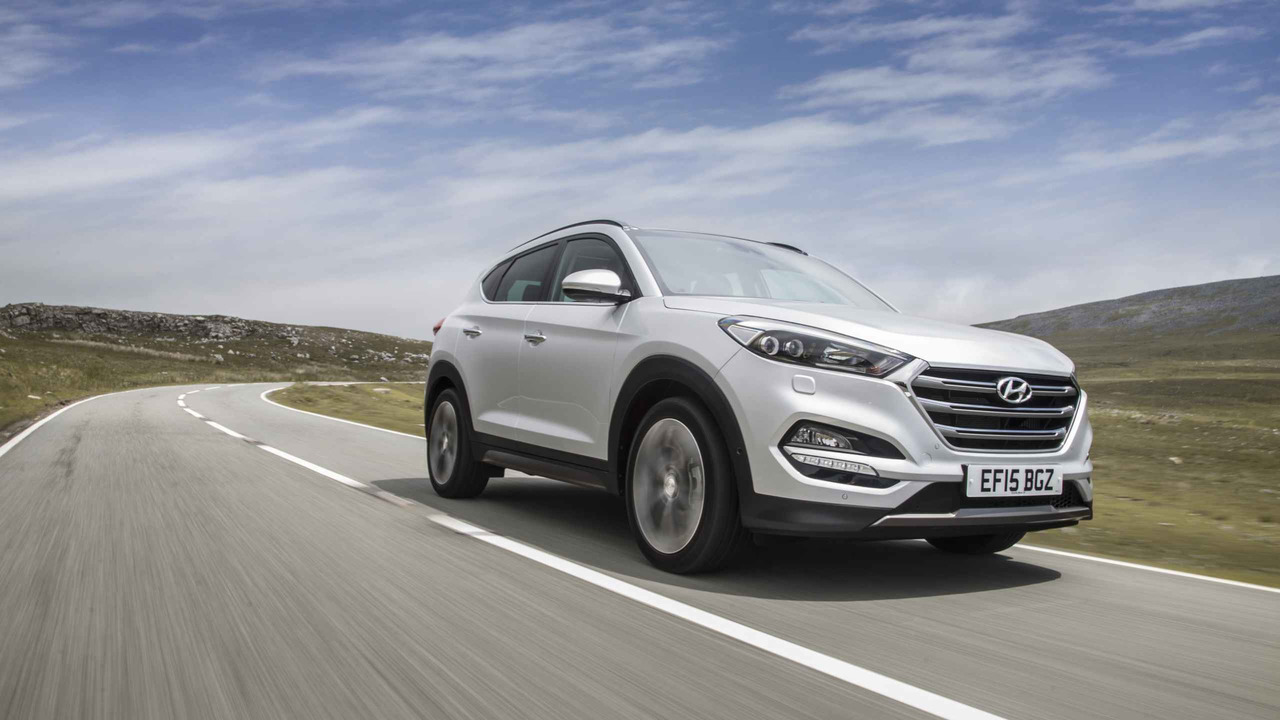 The smaller of Hyundai’s two SUVs, called the Tucson. It comes with a variety of diesel and petrol engines, the choice of two- or four-wheel drive, and there are three transmissions too. Specifications range from Tucsons fitted with basic, but essential kit, up to fully loaded versions with all the mod cons, and what the Hyundai offers in this class are good looks, lots of interior space and cultured manners, all for a reasonable price and backed up by one of the automotive industry’s best manufacturer warranties.

Did you know? Tucson is not an entirely new nameplate – while the immediate predecessor was the ix35, Hyundai sold a Tucson SUV from 2004-2009.

The Hyundai Tucson is the embodiment of how far the brand has come in a short space of time. It wasn’t so long ago that the only reason you’d recommend a Hyundai was because it was significantly cheaper than its competitors and it had a spacious interior – but there were significant quality compromises as a result.

Not any more. The Tucson is a genuinely excellent car, polished to a high standard in all departments. In the compact SUV market, it’s one of the most attractive going and the quality of the interior is up there with the sector’s best. With good driving manners, manageable running costs, and a wealth of toys on even mid-range models, the Hyundai Tucson is one of the strongest cars in the class – and it’s so good, it might make you question why you'd go for a BMW X1.

While there might still be people who view Hyundai as an inferior brand, it’s models like this superb Tucson that should change public perception of the marque. A big part of its appeal is the styling. While the old ix35 wasn’t exactly ugly, it was blandly safe and didn’t really merit a second glance, but the edgy, angular Tucson is wholly different. It’s a design that needs the bigger alloys of higher-spec variants to look its absolute best, but even a 1.7 CRDi version on 16-inch wheels is attractive enough. Everything is in proportion and the front of the Tucson is dominated by the trapezoidal grille that is Hyundai’s trademark, while the rear styling is neat too.

The standard of the materials used in the Tucson has gone up several notches compared to the durable, scratchy plastics of the ix35 before it, and furthermore the layout of the dashboard is far more logical here than in its predecessor. If there’s a criticism of the Hyundai’s cabin, it’s that the design of the fascia is restrained – which means, in lower-spec Tucsons, it doesn’t look in any way interesting. The uppermost grades bring in leather seats and better fillets of trim that improve matters, however, and there should be no problem getting a good driving position in all models, as the steering wheel adjusts for reach and rake across the range, while the driver’s seat is also height-adjustable.

Bizarrely, basic S models get a marginally bigger boot than the rest of the range – these cars accommodate 513 litres of luggage with all seats in place and 1,503 litres with the rear bench folded down. If you don’t buy an S, you’ll have 488- or 1,478 litres of stowage on hand accordingly. Either way, that’s a mighty big cargo area for this class. The 60:40 split rear seats fold easily via use of a lever at the base of the chairs, and all of the Tucson’s doors open nice and wide for easy access or child-seat loading. It’s just a shame there aren’t a few more useful storage areas in the cabin.

All models are well specified, with a six-speaker stereo system (a bit weedy, truth be told), Bluetooth, a steering wheel with audio and phone controls, DAB radio, and USB/aux-in connections as standard. You need to get up to the mid-point of the specification tree, which is SE Nav, to benefit from the eight-inch touchscreen dash display that also features satellite navigation and a reversing camera, but that grade isn’t expensive. Sadly, there isn’t a stereo upgrade available, even on the options list.

Two diesel engines in four power outputs and a solitary petrol option make up the Tucson’s motive power choices, although the 1.6 GDi petrol unit with 132hp is best avoided as it’s slow, not particularly good for CO2 emissions and one of the thirstiest versions there is. It’s only found at the lower three trim levels.

So diesel Tucsons are best. There’s a 1.7-litre CRDi that’s a little older and noisier than the bigger 2.0 CRDi engine, but it’s also the most frugal and best for CO2 when teamed with the manual gearbox. It might be the slowest accelerating Tucson of all but its 207lb ft of torque delivered from 1750rpm means it is perfectly capable of keeping up with traffic flow. It’s available in all grades bar Premium SE.

You can have this engine with a seven-speed DCT automatic transmission, which sees power boosted to 141hp and torque up to 251lb ft, moderately improving the performance at the expense of economy and emissions. However, if you want a four-wheel drive Tucson, you have to have the 2.0 CRDi engine, which is available with either 136- or 185hp. Fuel consumption and CO2 output aren’t particularly good though, even less so if you opt for the six-speed automatic transmission.

The Tucson drives in a composed, appealing manner. Grip levels are good and so is body control. Aside from slightly grumbly drivetrains and automatic gearboxes that are behind the curve in terms of refinement, the Hyundai does a good job of limiting wind and tyre noise. The high-speed ride quality is largely unflustered, but big alloys can make the Tucson a little uncomfortable around town. The Tucson’s biggest flaw is its 'multimode' steering, which is lifeless in all settings. But overall, Hyundai’s compact SUV is a pleasant machine in which to cover ground.

As befits any good SUV, the Hyundai Tucson has picked up the full five-star Euro NCAP rating. It scored well in all four departments, registering strong adult occupant (86 per cent) and child occupant (85 per cent) protection ratings. There are anchor points for two ISOFIX child seats in the back and all models get six airbags, anti-lock brakes, an active bonnet system, Brake Assist, Downhill Brake Control, Hill-start Assist Control, and a tyre-pressure monitoring system as standard.

Step up just one trim level from base and Lane Departure Warning with Lane Keep Assist becomes part of the list, while another grade up brings Speed Limit Information Function (SLIF). However, only the top two grades have the fanciest equipment, such as Autonomous Emergency Braking, Blind-Spot Detection, and Rear Cross-Traffic Alert.

There are five, although the midpoint – and the best, which is SE Nav – is really a modest add-on to SE. However, it brings key equipment like the eight-inch touchscreen navigation and the SLIF safety system. All 2.0 CRDi models are only available from SE Nav upwards and are further distinguished by a silver rear skid plate and twin-exhaust finishers.

Elsewhere, the range kicks off with S, the only Tucson without roof rails, and it comes with items such as 16-inch alloys, air conditioning, automatic headlights, and four electric windows. SE bumps up the equipment count, with dual-zone climate control, 17-inch wheels, front fog lights, a full-size spare alloy, and heated front seats.

Go for the big seller, which is the 1.7 CRDi manual with SE Nav specification. It’s tempting to go for a 2.0 CRDi 4WD in Premium or Premium SE, but these models are quite pricey and may not hold their value as well.

As it’s a compact SUV it’s not the hugest vehicle in the world. Indeed, it’s not much longer than the average family hatchback.

The best Tucson, the 1.7 CRDi manual, can exceed 60mpg, which is good, if not as impressive as the greenest Nissan Qashqai. The Hyundais fitted with bigger engines, four-wheel drive, and automatic gearboxes are not impressive at all, the quoted returns struggling to breach 45mpg. The emissions don’t make the Tucson markedly cheap for VED or Benefit-in-Kind, either, but the competitive purchase prices and predicted strong residuals help make the Hyundai a reasonable proposition.

Hyundai has a good reliability record and the Tucson uses equipment that is tried and tested. Not only that, but there’s the company’s renowned five-year/unlimited mileage warranty, while all Tucsons are sold with five years of roadside assistance cover and complimentary vehicle health checks during that time. Furthermore, the Hyundai Sense Service Plan offers between two and five years servicing for a one-off fee.

Hyundais are not as conspicuously cheap as they once were, reflecting their increased product quality, and the Tucson is not in the bargain basement department. The headline-grabbing starting price that’s less than £20,000 is for the petrol-fuelled 1.6 GDi S – not a great car – so in reality around £23,500 for a 1.7 CRDi in desirable SE Nav specification is more like it. That’s not a bad price at all, considering the whole Hyundai ownership proposition, so it’s the sweet spot of the range – especially as the bells-and-whistles models all surpass £30,000; the Tucson is good, but at £32,000 it makes a lot less sense than it does below £25,000. 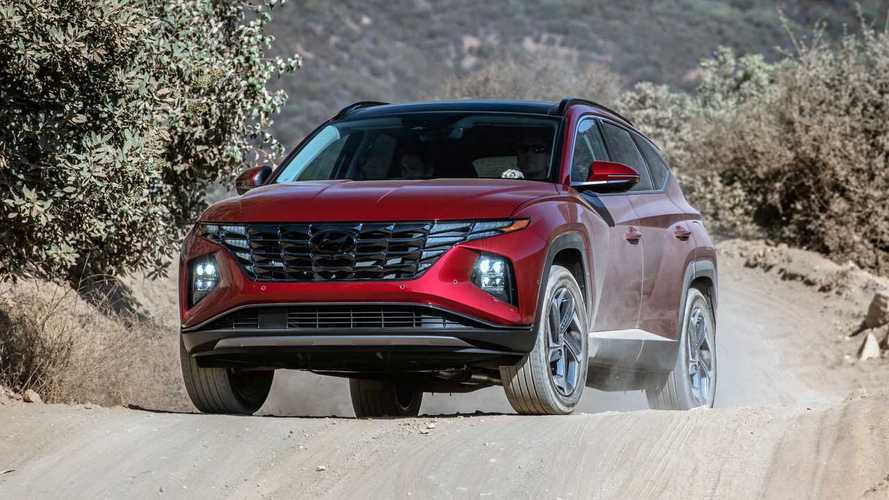