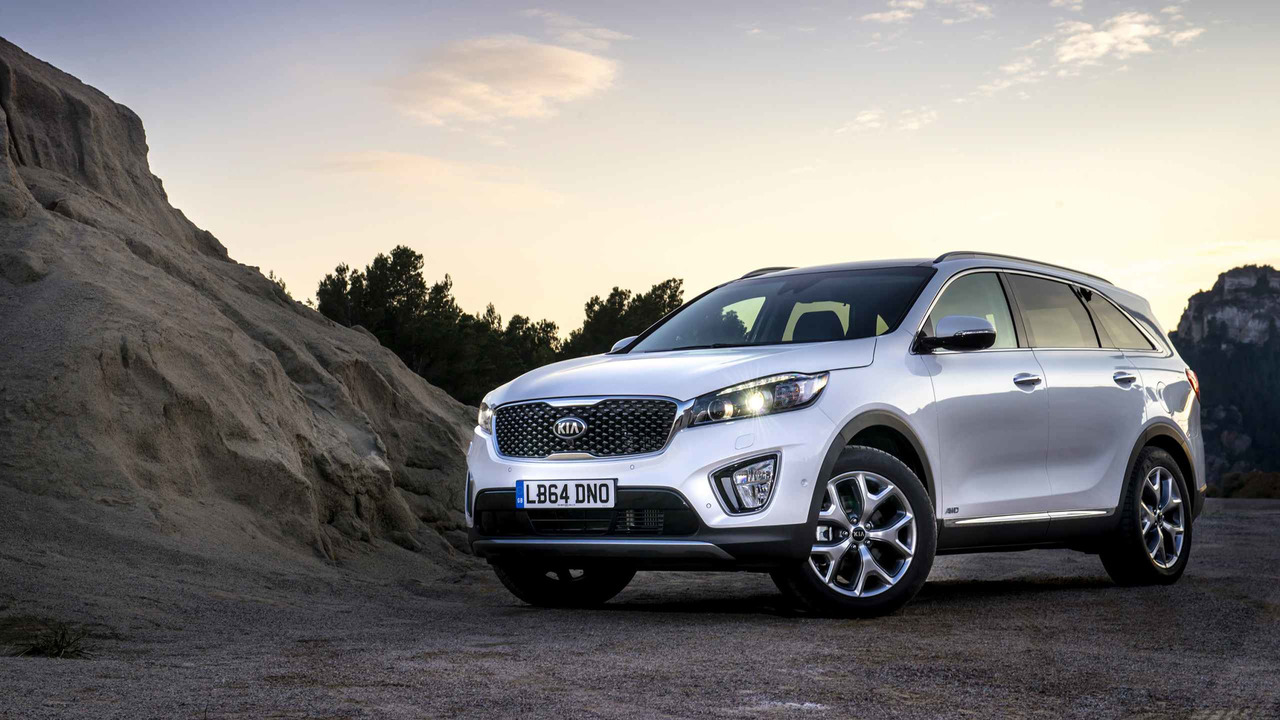 The Kia Sorento is a worthy and likeable seven-seat SUV, but is hampered by its sole diesel engine offering

The Kia Sorento is an SUV alternative to a seven-seat people carrier. All versions are four-wheel drive and are powered by the same 2.2-litre turbodiesel engine – the only things to select are the trim grade and whether to have a manual or automatic gearbox. The Sorento’s really strong selling points are its gigantic, utilitarian interior and the seven-year warranty, but newer rivals like the Skoda Kodiaq and Peugeot 5008 make it look a bit old and inefficient.

Did you know? While diesel-only in the UK, in other markets the Sorento comes with a variety of petrol engines – including a 3.3-litre V6.

The Kia Sorento has a strong if unrefined drivetrain, loads of standard equipment, quietly handsome looks, and an interior that’s cavernous, comfortable and functional. That single engine choice with its too-high emissions, an interior that's a touch cheap-feeling if hard-wearing, and a price that no longer seems such great value given the competition, mean that it's dropped down the 'budget' seven-seat SUV ranging along with the Hyundai Santa Fe and Mitsubishi Outlander, while the Skoda Kodiaq and Peugeot 5008 now take the lead.

The inoffensive looks of the Kia Sorento aren’t going to set anyone’s world on fire but it's a perfectly respectable, if rather bland design. It’s not as striking as its Hyundai Santa Fe relative, or the sharply styled Peugeot 5008. The large, dominant ‘tiger nose’ grille is probably the Sorento’s defining feature – and in higher specifications, this SUV looks like a fairly grand machine, even if you can also be paying a grand price for it in its highest trims.

There’s a simplicity to the Sorento’s dash layout, with clear dials and displays arrayed in an intelligent fashion, although basic KX-1 spec cars lack the colour touchscreen and will look very much more drab and out-dated. The quality of the materials also improves drastically through the trim levels, but the plastics and textures making up the dash and door cards always feels more durable than plush, even if they look fine and don't feel overly scratchy or cheap.

The driving position is high and commanding, and from base grade to range-topper it should suit any size of owner, thanks to a height-adjustable seat and a reach/rake steering wheel on all models. Higher-grade Sorentos have electrically adjustable seats, while all versions’ pedals are well-placed. Visibility, too, is very good all-round and you get front and rear parking sensors on all but base KX-1 trim.

The configurability of the seven seats is up there with the best in the Kia. The middle row is split 40:20:40, the rear seats 50:50, and all of them can be dropped independently of each other for full MPV versatility despite the SUV body. The levers to lower the middle-row backrests are in the boot, so if you’re trying to load something cumbersome into the cargo area, there’s no need to keep running round to the rear passenger doors to liberate more space. With all seven seats in place, access to the rear seats is easy too, thanks to outer middle chairs that auto-fold and slide forward by 270mm.

The boot is usable even with seven people on board, still offering 142 litres, while with five occupants and two seats folded it rises to 605 litres. Maximum capacity is a huge 1,662 litres. There are stowage areas, cubby holes, and interior lights everywhere in the cabin, while every Sorento gets a full-size alloy spare wheel.

Finally, the Sorento is an excellent towing machine. It can lug up to 2500kg with a manual gearbox (2000kg with the auto) and comes with self-levelling suspension from KX-2 grade upwards, as well as Trailer Stability Assist on all models.

The whole range benefits from DAB, USB and aux-in connections (there’s also a USB and a 12-volt socket for second-row passengers), and Bluetooth as standard. The lower two trims have a six-speaker stereo, while the top two grades feature a powerful Infinity Premium Sound System with 10 speakers, an external amp, and a subwoofer. Every Sorento has a leather-wrapped multifunction steering wheel complete with phone and audio controls.

Buyers need to step up from base spec to get a seven-inch touchscreen satnav, which is enlarged to eight inches for KX-3 or up – and all three screen-equipped Kias have a reversing camera. It's easy enough to use, and responds fairly quickly, even if the Skoda Kodiaq and Peugeot 5008 get more connectivity and multimedia functions as standard. There's no Apple CarPlay or Android Auto on the Sorento and you can only connect one phone at a time via Bluetooth.

One piece of kit that makes going for the upper end of the Sorento range worthwhile is the attractive seven-inch LCD monitor in the instrument cluster.

There’s just one 2.2-litre four-cylinder diesel motor, which can be paired to either a six-speed manual or a six-speed automatic gearbox, depending on specifications. It develops healthy numbers of 197hp and 325lb ft, which are more than enough to move the 1,932kg mass of the Sorento.

It’s a shame there aren’t any other engine options, given the array of petrol and diesel offerings available in the Skoda Kodiaq and Peugeot 5008, even if the latter rival is front-wheel drive only so will fall short of the Kia's (which is four-wheel drive as standard) off-road and towing ability. The 2.2 diesel is a little bit gruff if revved hard, and it's coarser than the diesels in the aforementioned rivals, too.

Even so, the Kia Sorento is a comfortable and quiet cruiser at speed, and as a result there’s a good case to be made for recommending the six-speed auto over the manual – except for the fact that it costs extra and it has a significant negative impact on the emissions. It does suit the Sorento better than the manual, so if you're not overly worried about economy then you should go for it.

Handling-wise, the Sorento is fine but nothing more. Body control is progressive and traction levels are high, thanks to four-wheel drive, but once again the Kia’s FlexSteer two-mode steering (only on manual models; autos get Drive Mode Select instead) is a let-down – it’s numb in either Normal or Sport, and the weighting of it is inconsistent. However, the Sorento drives with slightly more flourish than the Hyundai Santa Fe, but a Skoda Kodiaq betters it on most fronts.

Six airbags, front active head restraints, and impact-sensing door unlocking all feature on the passive safety kit list of every Sorento, while active safety range-wide includes ESC, ABS, Emergency Stop Signalling (which flashes the brake lights and then the hazards in the event of heavy braking) and Hill-Start Assist Control, as well as the standard-fit four-wheel drive. ISOFIX fittings are only on the outer two seats of row two, not in row three as well.

Items like Blind Spot Detection, Rear Cross-Traffic Alert, Lane Departure Warning System, and Speed Limit Information Function are reserved for the top two models, which is a disappointment given that you get many of these driver aids as standard on key rivals. Plus the Sorento doesn't have Autonomous Emergency Braking as newer rivals do.

There’s only one non-monochrome colour for the Kia Sorento and that’s Sunset Red metallic, which – as with White Pearl metallic – isn’t available on the entry-level model. The standard, solid hue is Clear White, while the remaining three metallic paints are called Midnight Black, Satin Silver and Graphite. It's a very limited colour palette even by low class standards.

This is really easy: they run KX-1, KX-2, KX-3 and – surprise, surprise – KX-4. The KX-1 can only be specified with a manual gearbox, the KX-4 comes with the six-speed automatic only, while the self-shifter is an option on the middle two grades.

It’ll need to be a big garage, as the Kia Sorento is long and wide.

Although it’s a four-cylinder diesel-only line-up, the Kia Sorento doesn’t turn in class-leading economy or emissions figures. Blame the 2.2-litre engine for that, which was lifted from the old car and so isn’t a cutting edge powerplant. At best, as a manual model on 17-inch wheels, it’ll approach a quoted 50mpg with CO2 emissions sneaking below 150g/km. Bigger 18-inch wheels knock economy to around 46mpg and CO2 up beyond 160g/km. The automatic is even worse, hovering around 42mpg and emitting almost 180g/km. Therefore, VED isn’t cheap and the company car users will likely want to look elsewhere.

Using that old 2.2-litre engine brings a benefit here, as it wasn’t subject to any recalls in the old Sorento and so should prove reliable. Indeed, Kia performs well in customer satisfaction surveys, so the Mk3 Sorento should be solid. Which means the SUV’s unbeatable seven-year warranty is belt and braces stuff; it’s worth pointing out that, although it’s unlimited mileage cover for the first three years, it switches to a maximum of 100,000 miles for years four to seven. Hyundai’s cover might be shorter at five years, but it’s unlimited mileage for the entire duration, while Skoda only offers three years and 60,000 mile warranty coverage.

Servicing costs are reasonable on the Sorento, but, like many manufacturers, it offers fixed-price servicing packages – called Care-3 or Care-3 Plus. The first covers the Sorento for its first three services, the second for the first five services.

When it was launched, the Sorento seemed cheap. But a raft of newer rivals have now made it look expensive. An automatic KX-3 will cost some £2000 more on list price than a similarly equipped and much more efficient Skoda Kodiaq SE L, and finance is surprisingly expensive, too. Put a £3000 deposit down on an automatic diesel KX-3, for 36 month contract with 10,000 mile annual allowance, and the Kia will cost some £600 per month or more. An equivalent Nissan X-Trail, Skoda Kodiaq or Peugeot 5008 will be around £400 per month.

The high emissions means that this is one to avoid for company car users, too.