The Kia Sportage is the Korean firm’s entry into the hotly contested and hugely lucrative C-segment crossover/SUV marketplace. Designed to go up against the likes of the Nissan Qashqai, Peugeot 3008 and Volkswagen Tiguan, the Sportage aims to offer high-quality fixtures and fittings, lots of equipment, and pleasant driving manners, for less cash than its equivalently specified rivals. The range is made up of two petrol and three models, and the Sportage can be equipped with four-wheel drive, although most versions send power to the front wheels only.

Did you know? The Sportage was designed by Kia’s German design chief Peter Schreyer, who was partially responsible for the shape of the original Audi TT.

Kia’s Sportage evolved into a fantastically strong all-rounder in its fourth-generation guise, with masses of in-car technology available at the lower slopes of the SUV’s range, interior quality that has moved on considerably from its predecessor, and a polished overall driving performance all making for a likeable Nissan Qashqai rival. It’s not without flaws, as it masters neither ultimate ride comfort nor thrilling handling, and the appearance of the car’s face might be off-putting to some, but it makes up for that with competitive pricing and the manufacturer’s seven-year warranty. If you’re in the market for this size of family SUV, it’d be foolish to ignore the Sportage. 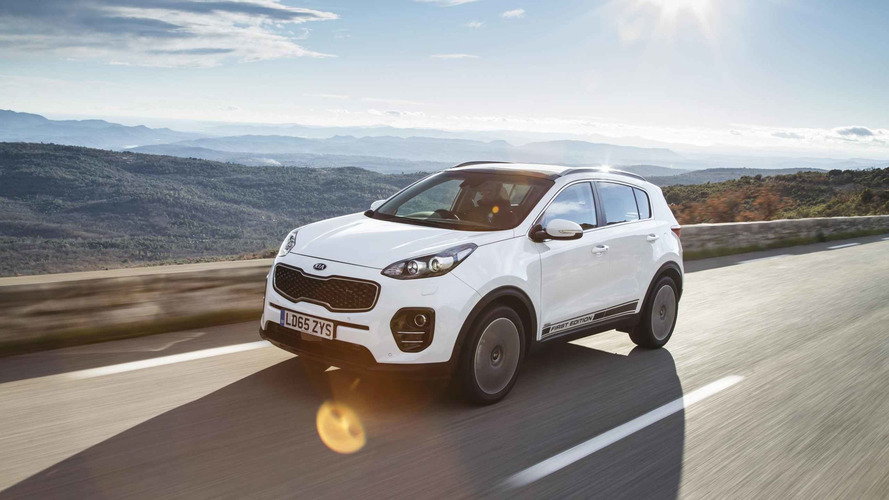 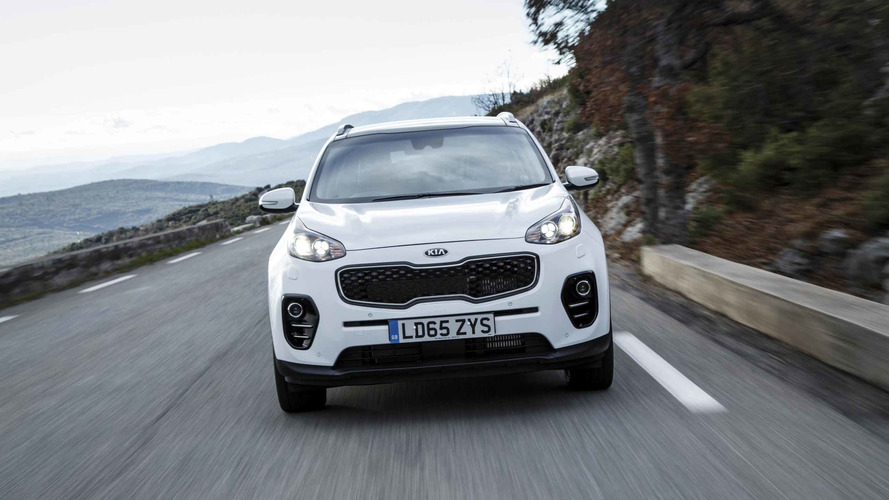 Kia’s improvement in quality over the years has made the brand’s current products more than acceptable machines to park on your driveway, and the smart-looking Sportage Mk4 only reinforces that ideal. The only real problem with the midsized SUV’s aesthetics is the daring front-end styling. While it is unequivocally good-looking from the sides and the rear, those high-set, detached headlights, the large ‘tiger nose’ Kia corporate grille, and the bluff front panel all conspire make it challenging to view nose-on. It’s a design that definitely suits darker colours than lighter ones, which is a pity as much of the Kia’s palette is made up of whites, silvers, and mid-greys.

Kia has put some real thought into making the Sportage’s cabin comparable with the best interiors in class, which are found in the Volkswagen Tiguan and SEAT Ateca rivals, although the Peugeot 3008 deserves an honourable mention. Apart from the entry-level Sportage, all models get at least a seven-inch infotainment touchscreen (it’s actually eight inches on most versions), and the tidy 4.2-inch LCD supervision panel in the instrument cluster is just a few rungs up the specification ladder. High-grade models come with various banks of buttons controlling all manner of gadgets, but what might have turned out to be a bewildering array of switchgear has been neatly and logically ordered by Kia to make the Sportage’s cabin both ergonomically sound and intuitive to use.

The driving position is commanding without being lofty, highly adjustable even on base-level cars, and the leather-trimmed, multifunction, reach-and-rake steering wheel is standard range-wide. Many cubby holes and storage areas are found on every Sportage, making this a useful car for families, and all the doors open nice and wide to make ingress and egress easy.

There’s enough leg- and headroom in the back for two adults to get comfortable, while the transmission tunnel running longitudinally through the car doesn’t impinge on centre-rear foot-space, although the uncomfortable, flat seat squab rather precludes long journeys in the middle of the back row.

Boot space is larger than the class average, although the maximums of 503- and 1,492 litres are only available on the base petrol model, as it makes do with a 'Tyre Mobility Ki't – every other engine in the Sportage range sees both these capacity figures fall by 12 litres, as they all employ a space saver spare wheel instead. Nevertheless, the boot is a good shape, has a low loading lip and the rear seats split and fold easily enough on a 60:40 basis. 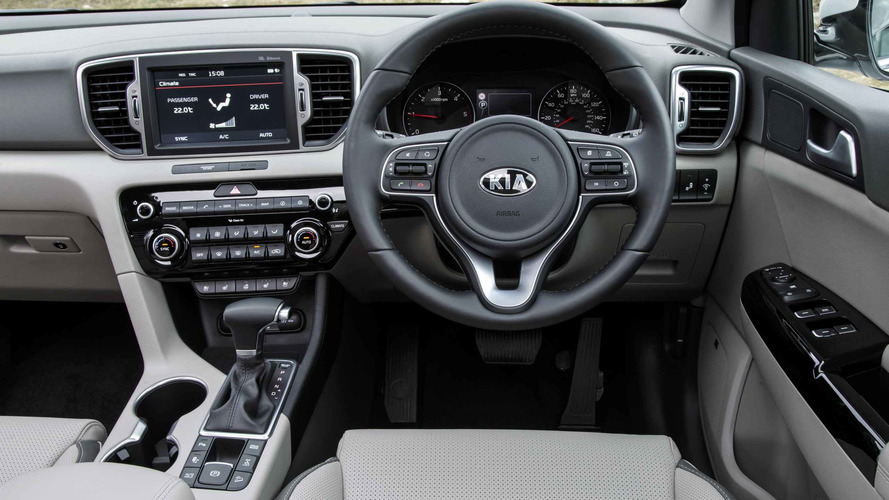 Base models get items such as a six-speaker sound system, a CD player, DAB, and Bluetooth with Voice Recognition from the off, but as it takes barely one or two moves up the specification ziggurat for desirable luxuries such as an eight-speaker JBL Premium Sound System, eight-inch touchscreen satnav, Android Auto and Apple CarPlay support, Kia Connected Services, a reversing camera, rear parking sensors, and the 4.2-inch supervision cluster to all become original equipment, there are few cars in this class that can rival the Sportage’s kit count for the money. At the top of the line-up are features such as a self-parking system and wireless ‘Qi’ phone charging. 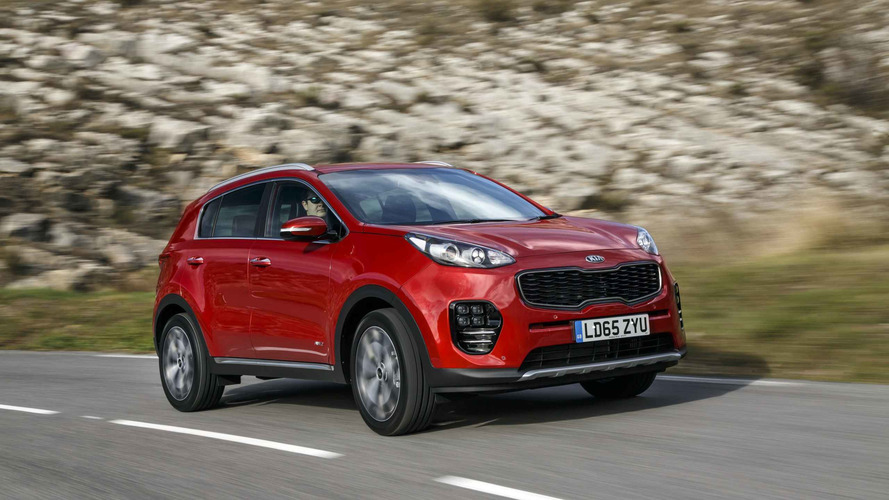 There’s a base petrol model without a turbo for 130hp, but it doesn’t make much sense to choose it for your Kia Sportage, unless you’re on a really tight budget. The 1.7-litre CRDi diesel is a much better option, while higher up an impressive 1.6-litre turbocharged petrol (the 174hp T-GDi) and the venerable 2.0-litre CRDi (134- or 182hp) do the donkey work.

Both the 1.7 CRDi and the 1.6 T-GDi come with a seven-speed DCT automatic if you don’t fancy the manual six-speed gearbox, while the 2.0 CRDi gets a conventional six-speed torque-converter auto as an option instead. The automatic transmissions suit the Kia’s rather laid-back character well, but they do cost more and they can have a significant impact on economy and emissions figures, too.

In terms of the drive, the Kia Sportage is very capable at both road-holding and having cultured day-to-day manners, but it excels in neither department. The steering, switchable between two modes, is numb and vague no matter what you do with it and there’s a little too much body lean to make the Sportage an engaging handler, while the larger alloys that are standard-fit on the more desirable specifications don’t do much for the Kia’s low-speed ride quality.

However, it’s a relaxed thing to use for just getting about, its reasonably compact dimensions making it easy to place on the road and thread about town, while there’s a lot of sound-deadening in the Sportage’s make-up that make this a hushed and comfortable cruiser at speed. 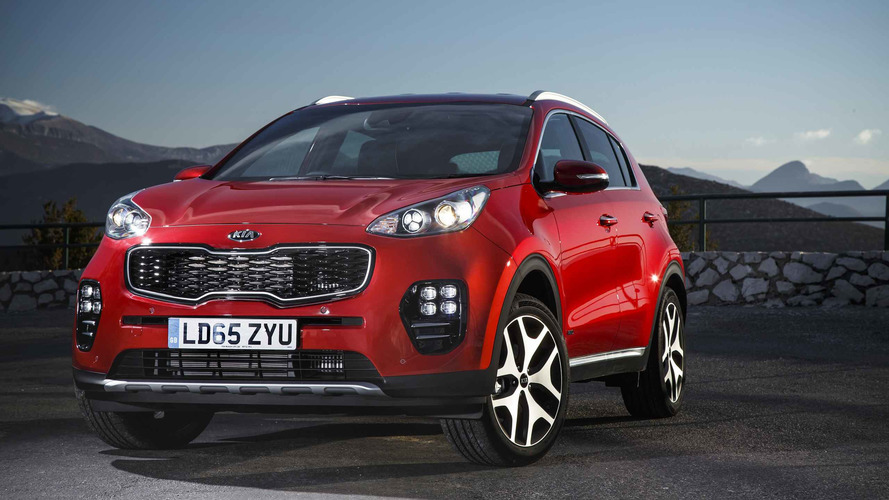 What with its five-star Euro NCAP rating and the fact that all but the base Sportages come with Lane-Keep Assist System, High-Beam Assist, and Speed Limit Information Function (SLIF) as standard, it might seem harsh for us to rate the Kia as only eight-out-of-ten here. Especially as all cars get six airbags, ESC with Downhill Brake Control, Trailer Stability Assist, Emergency Stop Signalling, twin ISOFIX fittings in the back, Hill-start Assist Control, and a tyre-pressure motoring system, too.

But there’s a weird specification quirk that means the otherwise well-equipped GT-Line and GT-Line S models do not benefit from Autonomous Emergency Braking, even though the 4, KX-4 and KX-5 Sportages have this item fitted. It’s the same story for Blind-Spot Detection with Rear Cross-Traffic Alert, as well. And no Sportage, even at the pinnacle of the range, has the company’s Adaptive Cruise Control, either. 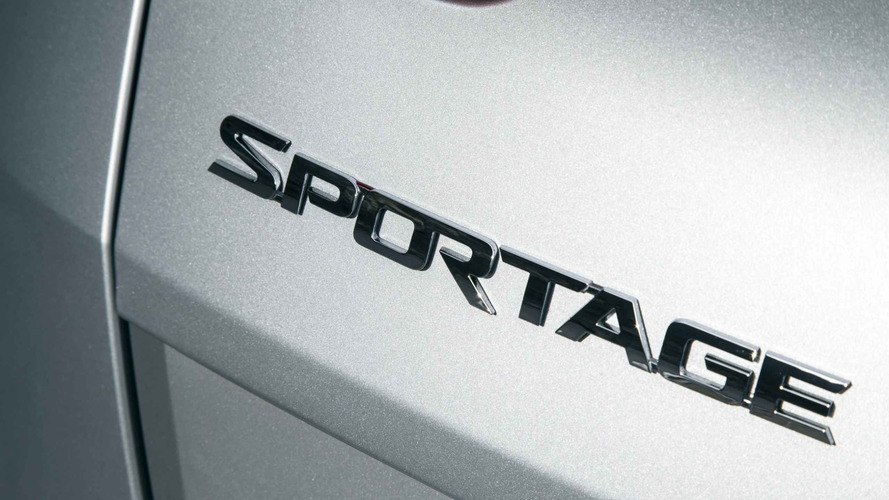 The standard colour is Bronze Metal, which is a brave choice for Kia to offer customers. Arctic White is the lowest-cost upgrade, and then all the other colours are classed as premium shades. Silver Frost and Alchemy Green are ‘limited stock’ and only available on specific versions, while the remaining colours consist of Planet Blue (only on lower grades), Phantom Black (available range-wide), Fusion White and Dark Gun Metal (from 2/KX-2 upwards), and then Infra Red (from 3/KX-3 and above).

The range runs 1, 2, KX-2, GT-Line, 3, KX-3, 4, KX-4, GT-Line S and KX-5. Any model with KX in its badging is a four-wheel drive (and a 2.0 CRDi diesel, to boot), while certain engines are only available at specific grades – the 1.6 GDi petrol, for example, is restricted to the lower end of the line-up. The GT-Line models have sporty body kits and interior styling, but are perhaps not fitted with all the luxurious toys that the higher 4/KX-4 and KX-5 grades come with.

The ‘3’ trim grade, or even GT-Line, has more than enough equipment for anyone and the 1.7 CRDi engine is the cheapest to run. The GT-Line can’t be specified with that motor, though, so enjoy the 1.6 T-GDi with a manual gearbox and AWD instead.

The Sportage isn’t massively long, but it is quite wide and tall, so bear these factors in mind when considering it for garage parking. 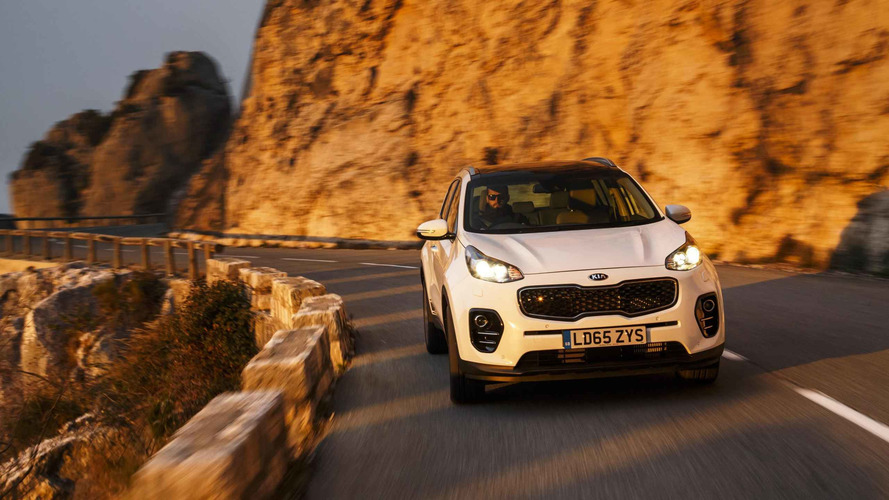 While there’s a strong reliance on diesel engines in the Sportage range, it’s not Earth-shattering for economy and emissions. The best model, the 1.7 CRDi, can return more than 60mpg, but most of the 2.0-litre diesels drift below the 50mpg mark. And on top of that, CO2 emissions run from slightly less than 120g/km, right the way up to nearly 180g/km. What makes the Kia so appealing is the seven-year manufacturer’s warranty, which is unlimited mileage until year three, and then capped to 100,000 miles until year seven.

There’s little reason to suspect the Kia Sportage will be unreliable, as it mainly uses the trusty mechanicals from the old model – 1.6 T-GDi petrol engine excepted – and it feels like it is much better built than the preceding car. Servicing takes place on an annual or 10,000-mile-a-year basis, whichever comes first, and while service prices are reasonable, fixed-price packages covering up to five years of maintenance can also be specified for one-off fees. 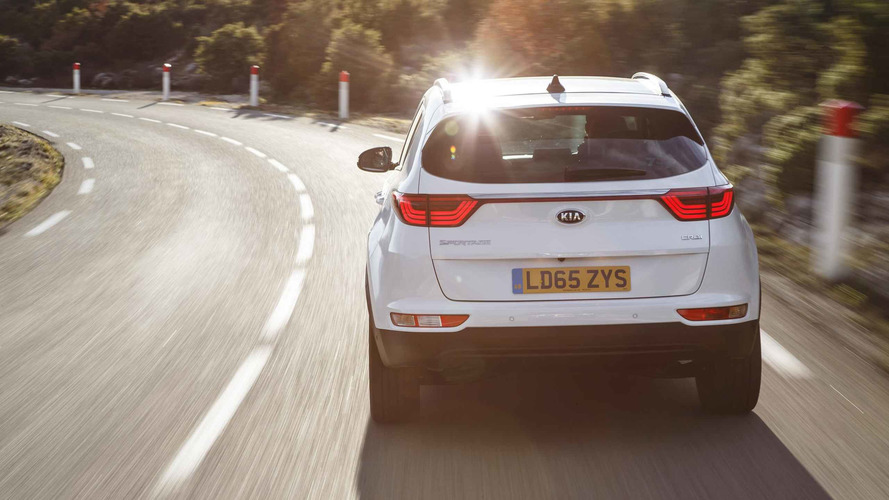 The Sportage isn’t conspicuously cheap; it’s not like it is a good three or four grand less costly than its rivals, certainly on list prices alone. But, when you start considering the equipment the Korean motor comes with, it begins to look like more of a bargain. The range starts at a little more than £18,000, rising to just shy of £32,000, with the ideal specifications and engines inhabiting the £24-28k bracket.