A step behind but still part of the mainstream.

The Focus is Ford’s ever-present, big-selling small family car, built to be as many things to as many people as possible. There is a huge range of trims and engines to tempt a broad spectrum of buyers, and the on-board technology is aimed not just at parents and kids, but keen drivers, grandparents, students and, of course, people who just want a known quantity.

Did you know? The block of the Focus’ 1.0-litre Ecoboost petrol engine is so compact it can fit on a piece of A4 paper

While the material quality and longevity of the Focus feels a step behind some of its rivals, it’s impossible to ignore its combination of mainstream appeal, multi-talented driving dynamics and ease of use. In some trims, the Focus looks desperately bland, while others look fantastic. But every model still manages to drive well. It’s not particularly exciting until you reach ST spec and it’s so common that no matter how you specify it you’ll see cars exactly like yours everywhere. Nonetheless, as a family all-rounder for every day of the week, it’s a good choice. 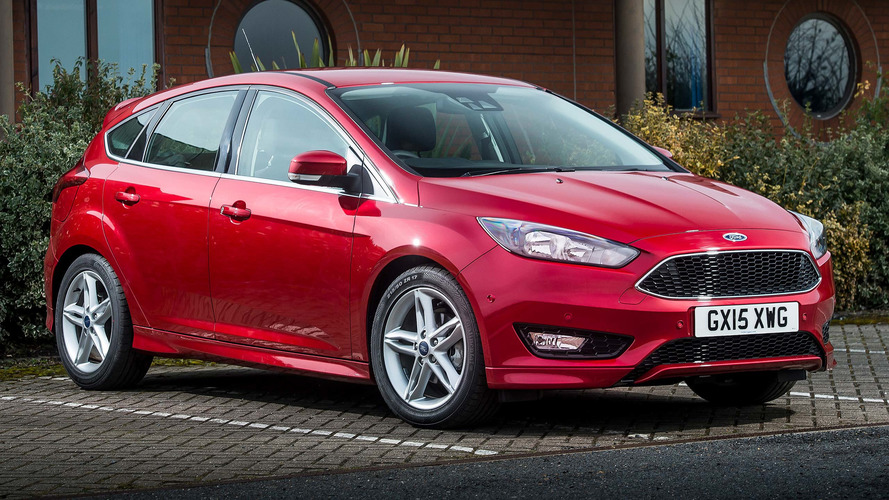 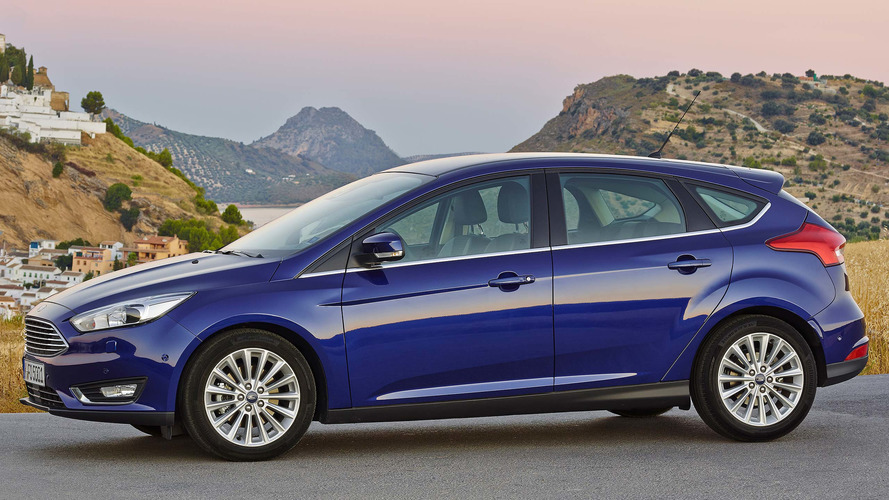 The basic shape of the Focus has no particular special features other than the trademark grille and hawk-eye headlights. From the front, mid- and high-spec models look really good, but the sides and rear are quite featureless and easily forgotten. As such, the car is quite vulnerable to the size and style of wheel it wears, looking slick and stylish on large alloys with a bodykit and spoiler, but abject at the bottom of the range.

The Focus is so widespread and common in the UK that it can’t really sustain a single image. There are so many owners from so many backgrounds who bought the car for so many different reasons, but who all like it in their own way. It’s the Matt Baker of the car world; it’s everyone’s friend, no one really dislikes it and it just generally wants to get on with the job with a smile on its face. 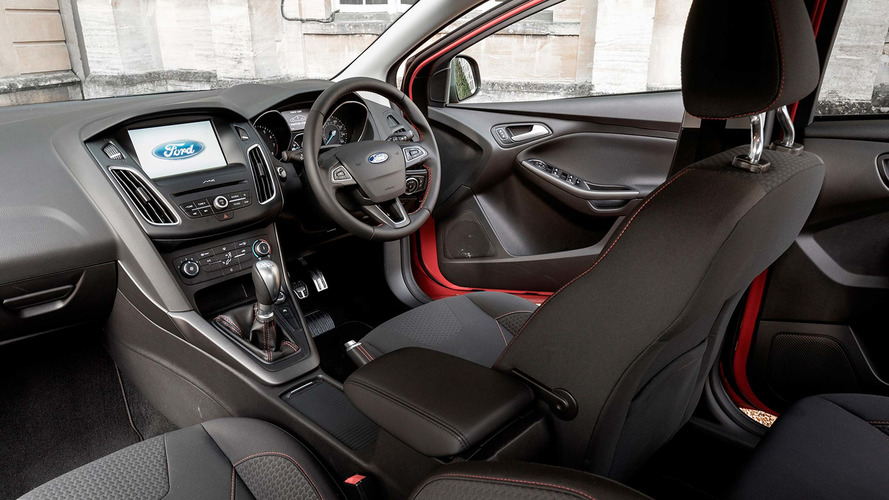 The Focus’ last update brought with it a better interior with higher-quality plastics, but it still can’t equal the class leaders for upmarket ambience. The problems are a case of Ford having got it just a little bit wrong in every way, which adds up to an overall effect that doesn’t quite work.

The dashboard and centre console look dated, especially on cheaper trim levels, but on more expensive versions the console and the steering wheel are packed with row after row of buttons that have been squeezed into far smaller an area than they should really occupy. The instrument cluster is perhaps too busy, as if it’s trying to emphasise how technologically savvy the car is, and yet the digital display between the analogue dials seems at least one generation behind, at least in its appearance.

One area Ford has never targeted is boot space. Even at its biggest, where a tyre inflation kit is supplied instead of a spare wheel, it’s smaller than key rivals. Opting for a full-size spare wheel reduces the boot volume to just 277 litres, which is only 23 litres more than you get in the tiny Suzuki Celerio.

The split rear seats do fold down for extra space, though, and the tailgate reveals a broad opening that can accept most things a family might need to carry from time to time. There’s not as much length as there appears, though, as the rear windscreen slopes quite steeply. 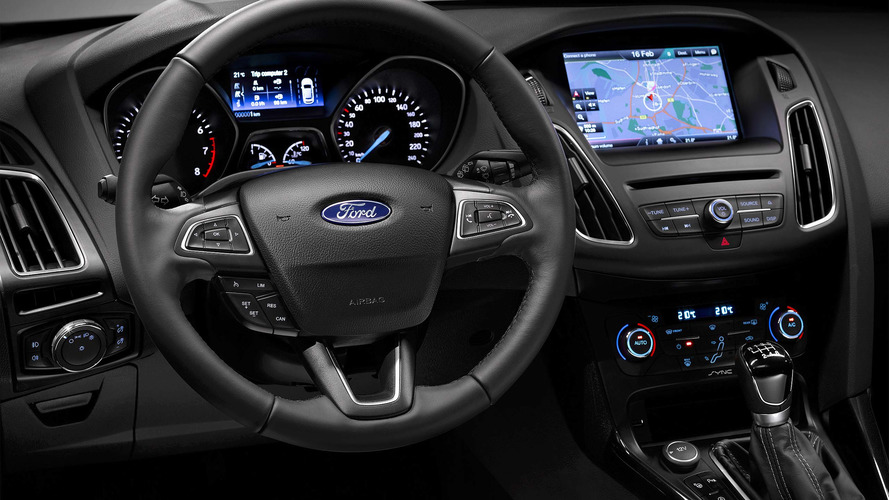 Start at the top with Titanium X trim and there is a huge spread of technology. In this trim, the Focus has Active Park Assist and can park itself in bays and roadside spaces with only minimal input from the driver, if you can learn to trust it and be patient with it. The system can also get the car out of spaces. Heated seats, rear parking sensors and a rear-view camera are standard at this level, too, but the rest of the range looks a little sparsely kitted-out.

Oddly, Titanium spec only makes do with manual air conditioning, as do the ST-1, the ST-Line, Zetec and Style. Cruise control is on both Titanium cars, but no others unless as an option. The 1.6-litre engines are so old-fashioned that those cars still run on hydraulic steering. The one exception to a list of spec sheets that only really cover the basics is the inclusion of the more advanced Sync 3 system on Zetec models and up, with the exception of the ST-1. It’s an excellent set-up with one of the best voice control interfaces on the market, but it seems to have come at the expense of the rest of the equipment list.

Annoyingly, there is a broad array of advanced safety systems but they are all limited to the options list. Blind-spot warnings, emergency low-speed braking and traffic-sign recognition are just a few useful items not fitted as standard. 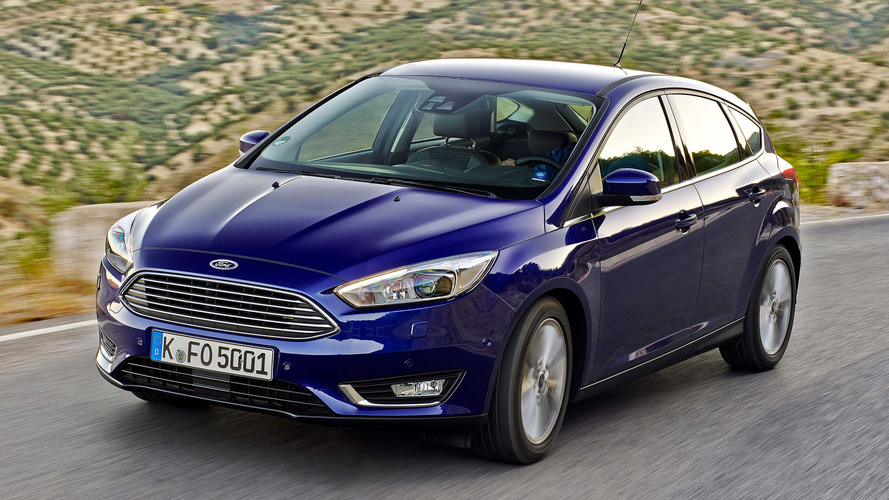 From the least to the most powerful Focus engine is quite a leap. The most basic 1.6 has a feeble 85hp, but the three ST models share not just a 185hp diesel but a 250hp turbocharged petrol as well, which gives the trio a huge turn of speed and a hooligan character.

Handling has always been one of the Focus’ strongest suits and it still has light but keen steering with a sharp turn-in after some initial vagueness around the straight-ahead. Handling in the run-of-the-mill models isn’t that much better than some of its rivals, with a good deal of body roll and some chassis flex where cars like the SEAT Leon feel more rigid. However, there is still an appreciable difference in how the Focus flows with a road and works with its driver, not against.

The diesel engines are familiar and very worthy, if not the quietest you could choose. The 2.0-litre version has loads of muscle and achieves huge fuel economy, leaving the newer and more strained 1.5 looking a little pointless. 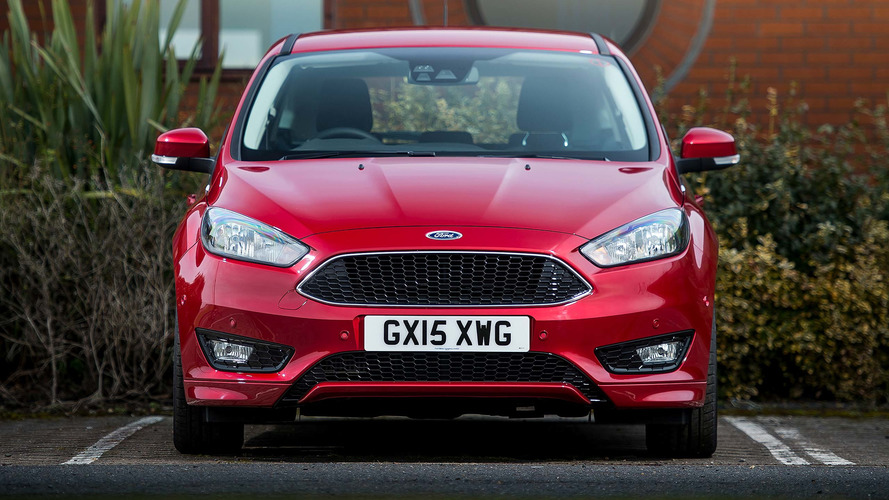 As things stand, the current Focus hasn’t been put through standardised crash test procedures. But the previous Focus, from which this one is developed, scored a maximum five stars in Euro NCAP testing, with excellent impact protection right across the board.

It’s disappointing to see almost every active safety technology restricted to the options list. The rear-view camera on the top-of-the-range Titanium X seems like poor provision for safety, and the rest of the range has to make do with a suite of stability and traction control systems, plus Torque Vectoring Control to help make corners safer by reducing the risk of understeer. 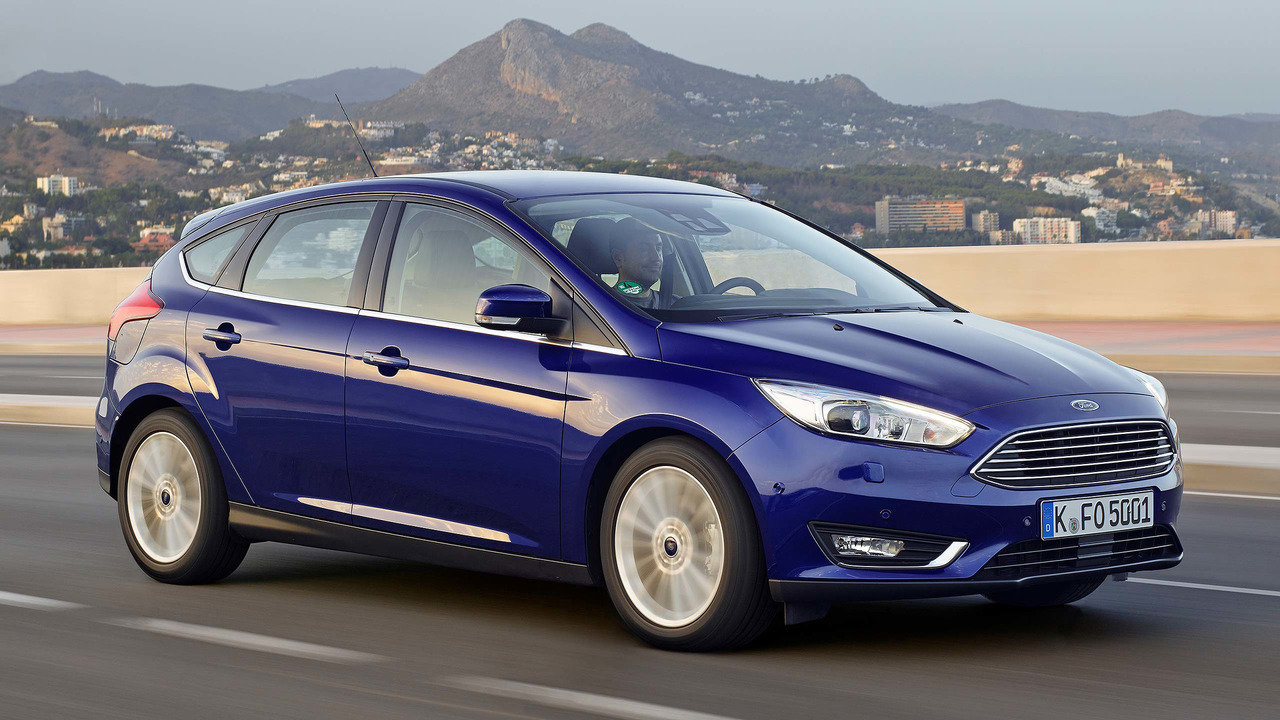 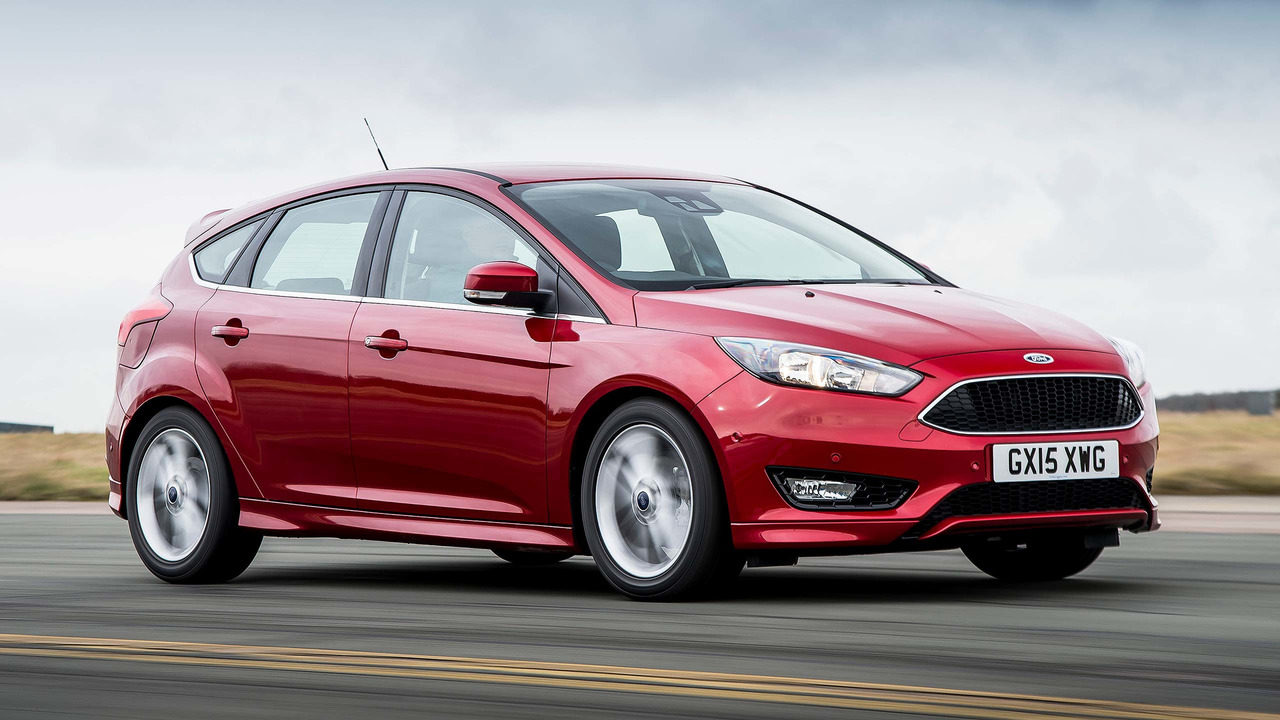 Given how sensitive the car is to trim grade, the colour choice is almost irrelevant, but Magnetic adds a sense of maturity and class, which the bland shape can lack in lighter shades. The Red and Black Edition models look great just as they are, though.

The lowest trim grade is Style, and it’s one to avoid. Its 16in steel wheels and wheel trims make the car look even cheaper than it is. The tech basics are covered, with electric mirrors, front electric windows, central locking and air conditioning. There’s also an old Sync system, USB connectivity and six speakers.

Zetec is much nicer, introducing Ford’s useful Quickclear windscreen, the Sync 3 system with a large touchscreen and voice control, a few silver-coloured trim additions on the outside and 16-inch alloy wheels. Moving up to Titanium brings automatic wipers and lights, cruise control, rear parking sensors and autonomous low-speed emergency braking.

Titanium X is the highest grade of what Ford calls its Luxury models, and it’s the only one that could be called plush. Larger wheels, adaptive lighting with xenon cornering headlights, Active Park Assist, a rear-view parking camera and partial leather upholstery are among the highlights. The driver gets a basic electrically-adjustable seat, with heating for both front chairs.

The ST-1, ST-2 and ST-3 form a slightly separate sub-range, with some specification overlap but also a lot of unique features, like 18-inch wheels across the board, lovely Recaro seats and ST-specific interior trim. The ST-1 makes do with the older Sync system, though, and misses out on trinkets like the heated front screen and automatic headlights.

Ford has found that Focus buyers can get so bamboozled by all the options available that grouping set combinations of popular features together makes it easier to sign on the dotted line. In the case of the ST-Line, by taking the Zetec model and adding just the right combination of ST-inspired aesthetic features inside and out, Ford has delivered a product that plenty of people prefer to the regular Focus range.

The ST-Line Red and ST-Line Black Editions have identical kit lists and engine choices, but in different colours. The Black has a red roof and red detailing on a black body, while the subtler Red has black detailing and metallic dark grey wheels with a red roof.

Taking into account its mirrors, the Focus is wider than it looks. Its flat sides mean very little of the mirror overlaps the body panels, but folding them in helps if access to your garage is tight.

The official EU efficiency figures achieved by the Focus should be taken with a large pinch of salt. As good as the 1.0-litre Ecoboost turbo is, the stated 60-65mpg is impossible on the average commute. Most owners report averages in the 40s. The same goes for the 1.5-litre diesel, which only achieves close to its official average when driven on longer journeys with extreme patience. As a rule of thumb, subtract 15% from the official average and that’s a realistic target.

Ford servicing is generally very affordable. The engine technology is becoming more complicated and a premium will generally apply for ST models, but it shouldn’t be anything to worry about.

Ford does well for the reliability of its mechanical and electrical systems, but its interiors tend to age faster than other brands, leading to complaints of rattling and squeaking trim. Servicing is cheap, though – about as cheap as it gets at main dealers.

Compared to important rivals like the excellent Volkswagen Golf, SEAT Leon and Kia Cee’d, the Focus looks surprisingly expensive. The Style Econetic starts at £19,595. Owing to a standard diesel engine and aerodynamic revisions to extract the maximum fuel economy, it’s actually £100 more expensive than the cheapest Zetec, which comes with a 100hp 1.0-litre petrol engine.

Titanium kicks off at £20,895 and Titanium X doesn’t begin until £22,895, with the pair split by the ST-Line, at a lowest price of £21,495. Dealer discounts are not hard to come by and haggling should definitely be part of the process. Some online research will help.