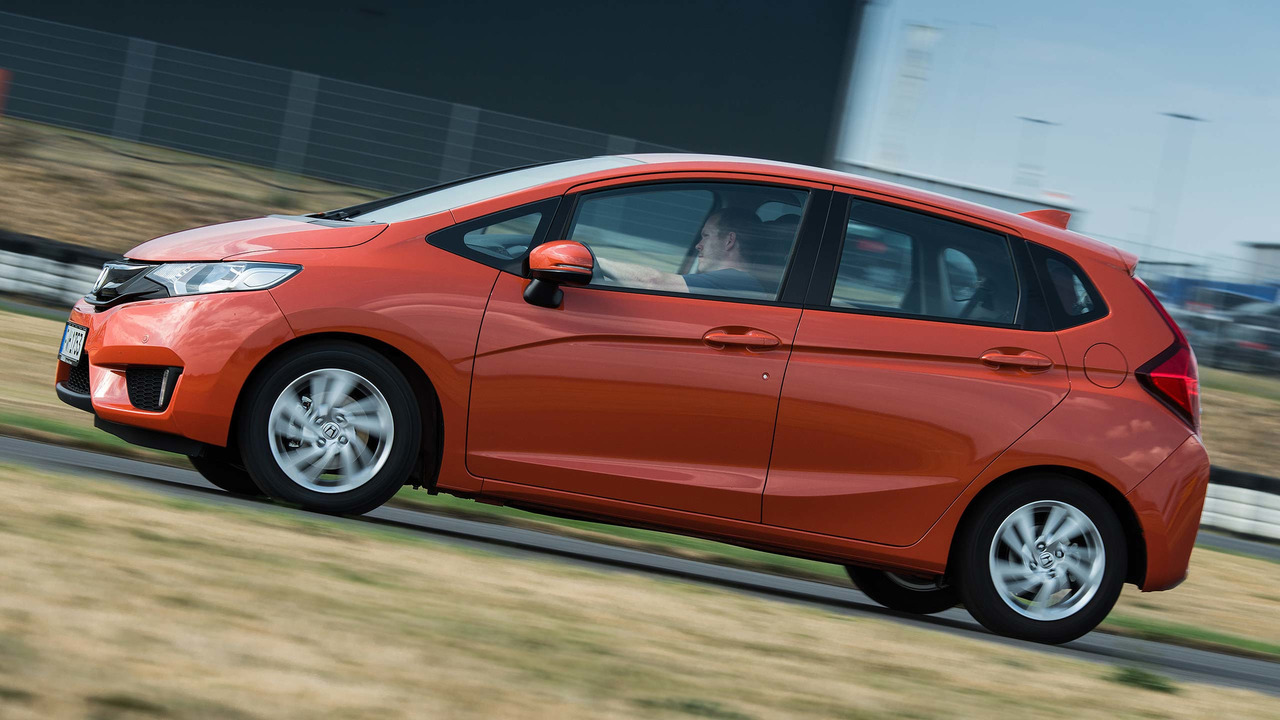 The Honda Jazz is a cheery little car built to surpass the usual limitations of supermini practicality. It’s one of the most reliable small cars you can buy, and along with striking styling, it comes in a spread of bright, happy colours. It’s better to drive than any Jazz before it, and it’s still the most versatile small car on the market.

Did you know? With the rear seats folded down, the super-practical Jazz has more interior load space than a Ford Focus hatchback

Honda has deliberately kept the Jazz range simple, with just one engine, two gearboxes and three trim levels. It works, though, delivering a product that absolutely excels at providing the maximum utility within the minimum body size. The Jazz is a peerless option when it comes to practicality in the supermini segment, and this one just seems happier than older ones, thanks not just to the cheery colour options, but also its light, zesty feel on the road. It’s still light years away from a Fiesta for driving fun, but nothing beats it for usefulness.

It’s pointless to deny that the Jazz attracts an unusually old typical buyer, aged around a decade older than the industry average for a supermini. Owners tend to keep them longer, too, right through their retirement years. It harms the car’s wider desirability because it’s seen as an old person’s runabout, rather than a funky, energetic lifestyle car.

In fairness, though, it’s both. It serves as reliable and safe transport for the elderly just as well as it meets the everyday needs of much younger drivers. The current model, with its updated, bolder looks, is clearly targeted at younger buyers, but the angular lines are so distinctive they could date very quickly.

Honda has presented a bit of a mix with Jazz’s interior. The S and SE trim grades come with manual air conditioning, which means big, over-light dials that feel a little cheap next to the solidity of the main areas of plastic trim. All models get a colour screen, which creates a focal point for the console, and the instrument dials are easy to read. The rev counter is small next to the huge speedometer, but Honda has got its priorities right for a car of this type.

While there are some areas where the plastics could be thicker or have a more premium finish, the Jazz generally feels well made throughout. Top-spec EX models go further towards digital technology, with an extra climate control screen in place of the big dials.

The real genius of this car is its flexible rear ‘Magic Seats’, which allow the seat bases to be lifted out of the way of the rear footwells, making a huge amount of extra space for whatever needs to be carried. Most bicycles can easily slot in with a wheel removed, and it’s a brilliant area to put larger, heavier suitcases for a two-person holiday, as it results in a more even weight distribution from front to rear.

Alternatively the seat-backs can fold flat, revealing a relatively cavernous load bay that eclipses a number of cars from the class size above. There is provision for lashing hooks, but Honda definitely could have added hooks for shopping bags, which, sadly, are missing.

The cupholders are a bit of a stretch, positioned low down ahead of the gear stick, and if you have a taller container it can interfere with access to the 12-volt socket, USB ports and, unusually, HDMI port. The S model gets a single USB and no HDMI, while the SE and EX get two USBs and a single HDMI. That’s really impressive for a small car, beating plenty of large ones.

The SE upgrades the media screen to a seven-inch touchscreen with sharper detail and an interface that works more like a smartphone. It also brings front and rear parking sensors, door mirrors with electric folding, automatic main-beam control and an amazing spread of safety systems that often aren’t standard on cars of almost twice the price.

If you really feel the need for more tech, EX offers two extra speakers, a rear parking camera and climate control, plus keyless entry and start. The passenger gets a height-adjustable seat and a one-touch electric window, too. Honda has been cunning in keeping climate control back only for the EX, because it knows most of its buyers will want it. Dealers can use this to help persuade a customer who originally wanted an SE to upgrade.

While Honda has noticeably sped-up the steering rack, giving a much more responsive feel than the old Jazz, it’s still quite numb. There is no real sense of involvement with the driving experience and it’s only partly saved by a modestly positive gear shift and fizzy, mildly characterful 1.3-litre 102hp engine. It’s more enjoyable with the manual gearbox but more efficient with the optional continuously variable transmission (CVT), particularly in town.

The CVT keeps the engine speed at the most efficient point in the rev-range, which at higher speeds creates a monotonous drone that can spoil the experience. But the Jazz is so quiet in urban surroundings that the CVT is arguably a step up in refinement.

Nowhere else in cars of this size – or a size larger  – can you find such an outstanding level of standard safety equipment, specifically on the SE and EX grades. Even the S has a low-speed emergency braking system, six airbags, anti-whiplash headrests, Hill Start Assist and the usual array of braking aids.

But for a car of this size to have as much active safety gear as the Jazz SE is excellent. Both it and the EX have Forward Collision Warning, Traffic Sign Recognition, a speed limiter and Lane Departure Warning.

Naturally, Honda was keen to have the car put through its crash safety paces by Euro NCAP, and the result was five stars with a deeply impressive 93% for adult occupant protection.

The range of colours Honda offers on the Jazz is ideal. Looking after the plainer options are Orchid White and Crystal Black, both as pearlescents, plus light and dark metallic silvers called Alabaster Silver and Tinted Silver respectively.

The line-up comprises S, SE and EX grades, mirroring the structure Honda uses on other models. All are amazingly well-equipped across the technology and safety spectrums, with even the S containing most of the really desirable features.

SE improves mainly on the safety, aesthetic and infotainment areas. Having parking sensors at both ends at this price point is a real coup. EX models add a final layer of polish, with a rear-view camera, climate control and larger alloy wheels. It’s certainly the best-looking version.

The upgraded media screen in SE and EX models is designed to accommodate integrated navigation, and Honda will add it to either model for £610 to create spin-off ‘Navi’ sub-models. Both SE Navi and EX Navi use excellent Garmin navigation software that’s simple to use, and clear at a glance, with split-screen views and lane indication for extra peace of mind. It even displays key road signs more or less exactly as they look in the real world, making it easier to relate the instructions to the road.

The Jazz may be big on the inside, but it’s still small on the outside. It’s towards the top end of the supermini scale for length, while staying exceptionally manageable. The body is very narrow and the mirrors are quite wide, but they can be folded in if needed.

Manual versions are more efficient on motorways but CVT-equipped models take the spoils both in town and overall. There’s no difference in road tax banding apart from on the S trim grade, which with the automatic transmission slips into band B while the rest stay in band C.

Irrespective of the gearbox choice, the Jazz tends to come close to matching its official fuel economy figures. Beating the 50mpg mark should be achievable without too much drama. Insurance costs have been slashed because of the massive improvement in standard active safety kit, too.

Servicing is a more expensive than might reasonably be expected of a car this small and mechanically simple. Apart from visual checks, the first service is just an oil and filter change – so is priced unfairly. Reliability is famously good, though, with the Jazz having picked up plenty of awards and commendations for its apparent reluctance to go wrong.

At £15,755, the Jazz to buy is the manual in SE Navi trim. It offers remarkable value for money when you compare its spec and practicality against similarly-priced and more expensive alternatives. The entry point is a little over £2,000 lower, though, with the manual-only S. Its asking price of £13,645 is cheap for the impressive spec, but arguably it’s worse value than the SE Navi.

Adding the CVT tips the value scales away from the Jazz, with even the S coming close to £15,000 and the EX Navi topping out at nearly £18,000 before any options. Drivers paying benefit-in-kind tax will see a £7 difference between S and SE, a further £6 for EX and an extra £2 to add navigation. But because of CVT-equipped cars’ lower emissions, certain models actually cost less per month as automatics.