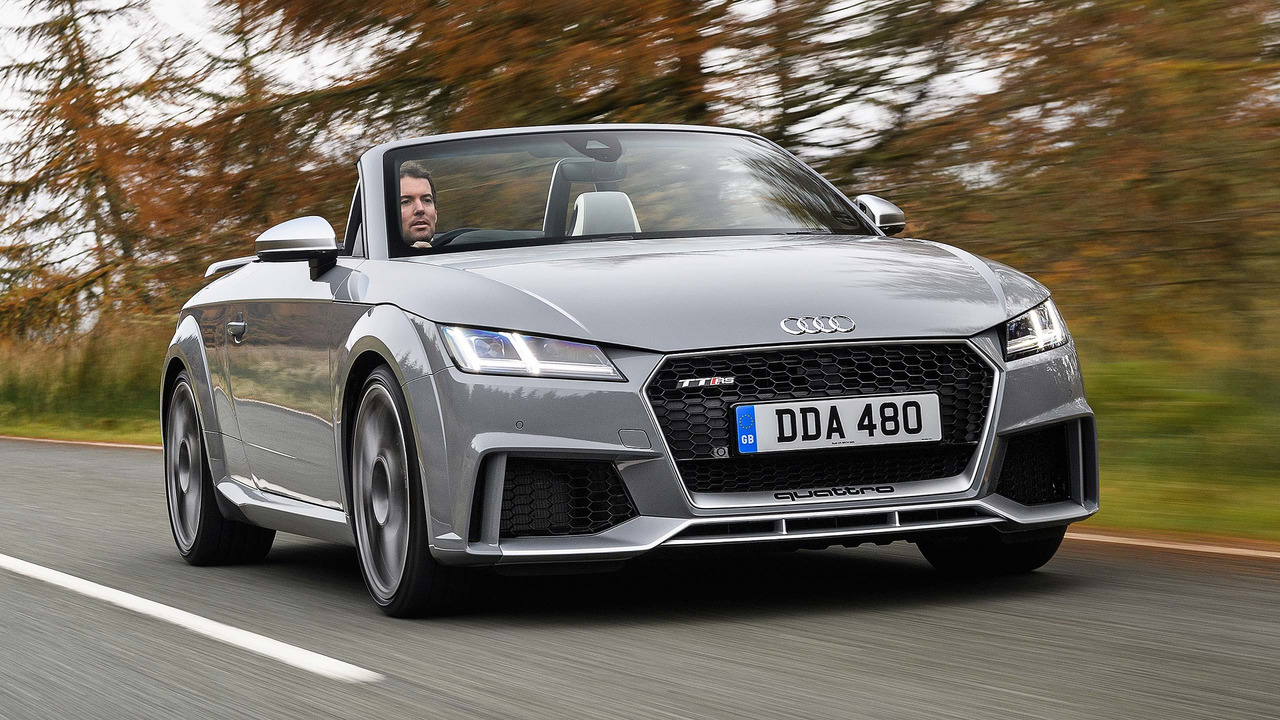 An every day cruiser that has dramatically upped its game.

In the past, people have dismissed the TT Roadster as being nothing more than a poseur’s car, but the third-generation model has upped its game. This soft-top version of the TT is more refined, better to drive than ever and packed with far more advanced technology than any of its predecessors.

Did you know? The TT Roadster was scheduled to be the initial 1998 launch model until Audi decided to lead with a hard-top Coupe version

The Roadster may not be the purist’s TT of choice and besides the TTS there may not be the quality of exhaust note to really impress a driver. However, the option to open up all that sky, even while moving around town, is a huge benefit. There is no real-world loss in driver enjoyment versus the Coupe for the vast majority of the time, so the Roadster makes a strong case for itself. As an everyday cruiser to feel good in, the TT Roadster hits the mark.

The Roadster has always had an element of fashion to it, and design is obviously a big part of the soft-top TT’s identity. The roof line attempts to mirror that of the coupe and does so well, while it shares the sharp angles in the headlights, bodywork creases and wheels.

Since Audi revealed at the car’s launch that the first-generation TT was designed as a Roadster before being reverse-engineered into a coupe, the Roadster’s stock has risen a few notches. It’s more credible, like a young defence lawyer who just won her first big case. It’s the hot property that everyone wants.

Like the Coupe, the Roadster looks more than good enough in its cheapest, simplest guise to overcome much of the need to upgrade wheels, interior parts and so on.

The Roadster has to carry the flag for Audi in the same way that the R8 does among supercars. It’s built to be a fundamentally desirable car – a car to transcend price, to an extent – acting as a figurehead and ever-present benchmark. The interior is suitably fantastic in appearance and quality.

The controls are minimalist, allowing for a small centre console that sees the seat heating and air movement controls relocated to the central dials on the air vents. It’s fiddly, but it suits the high-tech nature of the TT better than, say, the A3, where this design also features.

As in the Coupe, the gear lever is mounted high, close to the steering wheel for a driver-focused feel while a flat-bottomed wheel is standard for more thigh clearance.The pedals are positioned quite close together and will allow enthusiastic pilots to rev-match downshifts through the manual gearbox.

The Roadster ditches rear seats altogether to make room for the roof to fold neatly away, and it also takes a hit in terms of boot space. The 280-litre luggage area, already 25 litres down on the hard-top TT’s boot, can’t be expanded.

Practicality is simply not this car’s best attribute. The door pockets are small, unable to carry anything of any height or width, and since the gear lever is quite far forward, the cupholder has been shoved unceremoniously beneath the armrest. You have to slide the top part out of the way to access your drink.

The finely-stitched leather surfaces and Alcantara don’t do well with food and drink spills, so it’s better to organise a protective upholstery treatment before taking delivery, or simply forego food and drink in the car.

As something of a technological flagship for Audi, the TT Roadster gets loads of intriguing technology. Drive Select, which controls certain engine and chassis behaviours, is standard across all models, with four modes covering Auto, Comfort, Efficiency and Dynamic. The Progressive Steering is frustrating, though. It’s a variable steering ratio that is designed to make life easier when parking, but that actually presents confusion by changing the amount of steering lock required for identical corners depending on the speed you’re travelling.

The excellent MMI rotary dial and control panel is also shared across all TTs, linking to the main all-digital instrument cluster display. Controls on the steering wheel also play a big part. USB, Bluetooth, DAB and standard radio frequencies are covered by the media system, along with a CD player and two SD memory card slots.

It shares most of its specification with the Coupe sister car, but clearly the advanced acoustic fabric roof is a difference. It opens and closes in just 10 seconds at speeds of up to 31mph. Roll-over bars are also unique to the Roadster, protecting the heads of the driver and passenger if the car should flip onto its roof.

The 90kg weight penalty incurred by losing the roof and replacing it with lots of chassis bracing does hurt the Roadster’s performance by two or three tenths of a second in the 0-62mph sprint. You can just about feel the difference if you’re looking for it.

The 1.8-litre TFSI petrol is arguably the best engine, finding a sweet spot between power and chassis feel. With much less torque than the 2.0-litre upgrade, the 1.8 needs to be worked harder, but it’s lighter, which helps the nose feel more eager and fun.

Ultimately, the 2.0-litre car is very much the quicker in a straight line – and with more pulling power through the mid-range it’s more relaxed, too. With 230hp, it’s offered with front-wheel drive or Quattro four-wheel drive. There’s also a more highly-tuned engine for the TTS Roadster, with 310hp and a serious performance boost. But, if anything, the TTS feels like Audi has tried too hard, making it twitchier and less enjoyable overall.

Finally, there’s a diesel option, which has proved popular with people looking for maximum miles per gallon. It offers no driving enjoyment, though, and although it’s quite smooth for a diesel, its noise and character spoil the experience whether the roof is up or down. It’s only really suited to drivers more interested in the TT’s looks than what it’s like to drive.

Comparatively modest crash test results mean a four-star rating rather than the full five. The TT does have an automatic post-collision braking system, but was criticised by Euro NCAP for lacking autonomous emergency braking and failing to prevent whiplash well enough. It did very well in the lateral impact test, though.

In the car’s favour are wide tyres with lots of grip, in conjunction with powerful brakes. During cornering and braking, the TT feels every inch the poised, stable sports car it claims to be – slightly numb steering aside. In the real world, the TT Roadster has so much grip, feeling so sure-footed on most surfaces, that ‘safe’ is one of key the ways to describe the driving experience.

Ibis White and Brilliant Black are the two free, flat colour choices, while the metallic options include Tango Red, Nano Grey, Floret Silver, Monsoon Grey, Mythos Black, Scuba Blue and Glacier White. A separate option for all trim grades except lowly Sport is Daytona Grey pearlescent. All optional paints cost £550, with no discount for the fact that there’s no roof to paint.

Of course the Roadster also has hood colour options. Black, grey and beige are available, although grey isn’t available with Nano Grey, and beige can’t be specified with Tango Red, Scuba Blue or the special TTS colour Vegas Yellow.

There are two unique colours for the TTS Roadster: solid Vegas Yellow at £550 and Ara Blue, a crystal-effect finish priced at £775. Across the range there are also Audi Exclusive paints for an eye-watering £2,025, or entirely custom shades from the customer’s own input, at £2,525.

Sport has so much equipment that it does beg the question whether an upgrade is necessary. The clever Virtual Cockpit is just one of its useful and forward-looking features, and the hood is identical on every Roadster trim grade. S Line adds some extra technology like LED headlights, and increases the aesthetic appeal thanks to larger wheels. It’s at S Line level that small but tempting features like the perforated leather gearknob appear, along with brushed aluminium trim inserts. Black Edition adds larger wheels again, plus a black styling pack, a Bang and Olufsen stereo and privacy glass.

The TTS Roadster can’t pretend to be completely focused on speed, but it’s the high-performance variant for those who want to add speed and sound to the open-top experience. It’s an offshoot model, slightly apart from the rest of the range, taking the entry-level Sport as its base. It adds a lot of the same equipment as the other models, like the LED headlights, Active Lane Assist and automatic lights and windscreen wipers, but has a mid-range stereo and more aggressive ‘Super Sport’ seats.

There is a TTS Roadster Black Edition as well, which takes the same ethos as the regular Black Edition, adding black styling trim and the Bang and Olufsen stereo. UK customer demand is such that this top-spec trim option has been spread right across almost all of Audi’s cars.

The TT only looks so wide because its roof is so low. Including the mirrors, it’s only six centimetres wider than an Audi A1, so it tends to make light work of car parks and city streets.

Fuel economy is fine, even if it can’t match the official figures. It’s not a terribly lightweight car, after all, and it uses reasonably large engines. The petrols average 35-40mpg in the real world, which, given their potential performance, is not bad at all. The diesel is the clear winner for fuel economy, with a listed average figure of 60mpg translating to more like 50mpg on the road. Emissions are lower than you might expect, but higher than those of the Coupe.

The TT Roadster shares its drivetrains with many cars across the Volkswagen Group, so parts and servicing are easy to come by. The four-cylinder engines offer flexible servicing schedules, too, potentially prolonging service intervals as far as two years – although they’ll be more expensive once they occur, as more work will need doing at that point anyway.

While Audi’s cars aren’t quite as reliable as many owners would like to hope, thanks in part to the amount of complexity that the firm builds in, parts and servicing are easy to come by. Main dealer servicing isn’t too expensive, but sourcing OEM-quality parts elsewhere in advance of major services is a good idea to lessen the blow.

There is a sizeable jump in price between the cheapest model and the available upgrades. The excellent 1.8 TFSI Sport starts the range at £29,215, making it the best value by a long way. It’s some £3,080 cheaper than the TDI diesel and £3,185 more affordable than the front-wheel-drive 2.0-litre TFSI petrol in the same trim level. The most expensive Roadster Sport model is the TFSI petrol with Quattro and a S Tronic dual-clutch automatic gearbox, at £35,350.

As for the TTS Roadster, both models have 310hp and Quattro four-wheel drive, with the option of either a six-speed manual gearbox or a six-speed S Tronic. Prices start at £39,685 for a manual version and rise to £42,650 for a Black Edition with the S Tronic transmission.