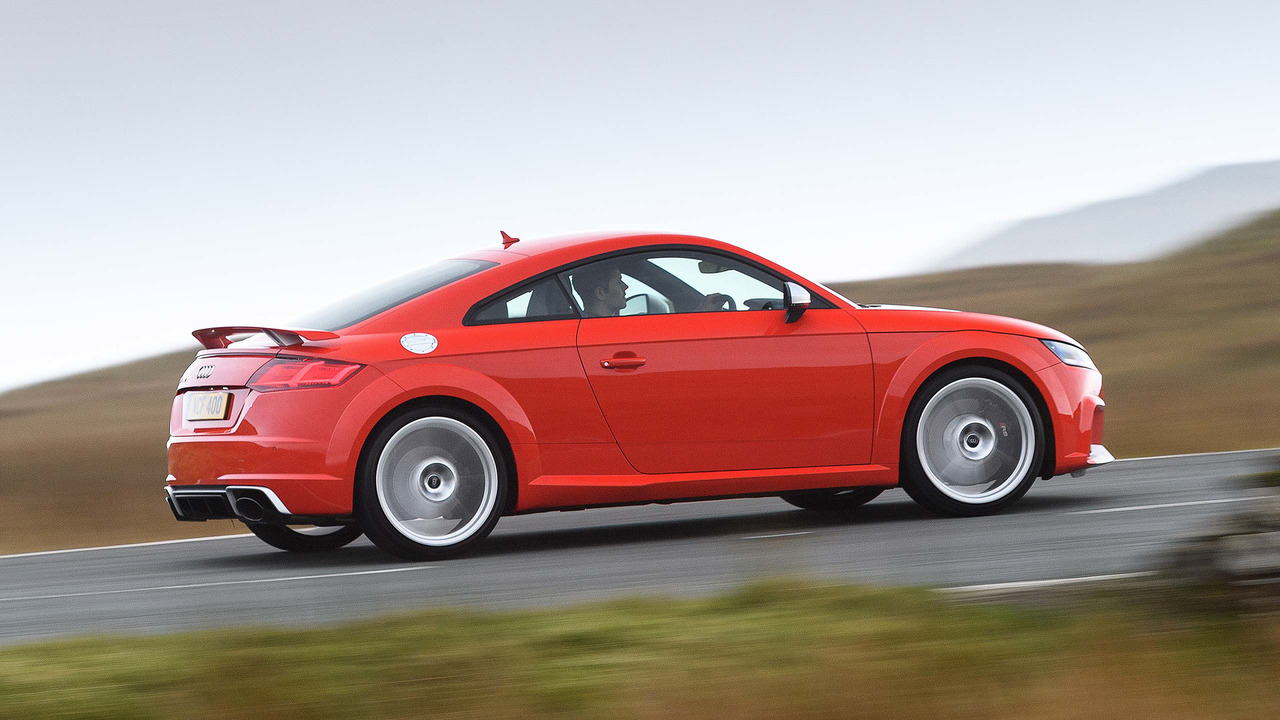 A modern classic that is a world apart.

The Audi TT has been through a fascinating time during its three generations, beginning life as an unashamedly design-led coupe that was criticised for its lack of driving dynamics. It’s now considered a modern classic, but through the TT’s second and third iterations the scales have shifted more towards driving pleasure without losing its distinctive identity.

Did you know? The TT was originally designed in the 1990s as a soft-top roadster before being reverse-engineered to make the eventual 1998 coupe.

The TT has come a long way since 1998 – or maybe not so far at all. It still isn’t the last word in driving pleasure and it’s still just as recognisable by its silhouette as it always was. But the technology on display, from the latest Quattro four-wheel-drive and modern turbocharging systems to the Audi Virtual Cockpit, makes this one a world apart. As a pressure-free, guilt-free and trouble-free compact coupe, the TT takes some beating.

There is no dispute that design is still a major part of the TT’s appeal to its target audience. It’s a stark yet fluid shape, the swooping, aerodynamic roof and corners punctuated by sharp angles in the headlights, bodywork creases and wheels. It’s a very fine looking car with balanced proportions between glass and metal. It would be easy to argue that this is Audi’s best-looking vehicle.

It’s also the one Audi that is benefitting from an increase in the fortunes of its original ancestor, sort of like finding out that you’re actually a high-profile member of the Royal Family. With first-generation TTs beginning to climb in value and reputation, the general status of the TT as a desirable car is more solid than ever.

Unlike other Audis, and most other cars you can buy, the TT looks good enough in its cheapest, simplest guise to overcome much need to upgrade wheels, interior trim and so on.

Audi sees the TT as something of a standard bearer, an everyday hero car for people on ordinary wages to aspire to. For that reason, the interior is outstanding both in style and execution. The controls are minimalist, allowing for a much smaller centre console, moving the seat heating and air movement controls to the central dials on the air vents. It’s fiddly, but it suits the high-tech nature of the TT better than, say, the A3, where this design also features.

The gear lever is mounted high, close to the steering wheel for a driver-focused feel, while a flat-bottomed wheel is standard for more thigh clearance.The pedals are positioned close enough together to allow heel-and-toe rev-matching on manual downshifts through the gearbox.

As for materials quality, it’s tough to identify much, if any difference between the TT and the likes of the luxurious A6. The lowest trim grade, Sport, has leather and Alcantara upholstery fit for a king alongside a general standard of fit and finish that’s impossible to fault.

Although it does technically have four seats, the rear two are all-but useless. There just isn’t enough legroom behind even an average-height driver unless they pull their seat closer to the steering wheel than they normally would. Consider the rear seats good for short journeys at most.

The rear seats do fold, though, raising the saloon-style boot’s modest 305-litre capacity to a much more practical 712 litres, and allowing owners to store longer items. Elsewhere, the door pockets are small and not suited to carrying anything much bigger than a pencil, while the cupholder between the front seats is rendered void if you also want to use the sliding armrest.

It should go without saying that finely-stitched leather surfaces and Alcantara don’t do well with food and drink spills, so it’s better to organise a protective upholstery treatment before taking deliver. Or simply ban food and drink from the car.

The TT has become as much a technological flagship for Audi as the A8, with features like the Virtual Cockpit installed here before anywhere else. Drive Select is standard across all models, with four modes covering Auto, Comfort, Efficiency and Dynamic. Less welcome is Progressive Steering, a variable steering ratio that is designed to make life easier when parking, but which actually presents confusion by changing the amount of steering lock required for identical corners depending on the speed you’re travelling at.

The excellent MMI rotary dial and control panel is also common to all TTs. USB, Bluetooth, DAB and standard radio frequencies are covered, along with a CD player and two SD memory card slots.

Xenon headlights, air conditioning, cruise control, an alarm and a multi-function steering wheel are all included on the base model, and some engine variants even add Active Lane Assist. More expensive models include gadgets like automatic wipers and lights, LED headlights, privacy glass and a 12-speaker Bang and Olufsen sound system. TTS models even get the elaborate Audi Magnetic Ride suspension set-up.

The TT isn’t particularly sharp or naughty, and it doesn’t urge you to go faster, but it has no trouble keeping up when asked. The entry-level 1.8-litre TFSI petrol is arguably the most balanced engine, finding a sweet spot between power and chassis feel. With much less torque than the 2.0-litre upgrade, it needs to be worked harder to keep it on the boil, but less weight helps the nose feel keener on turn-in, and it’s more fun for it.

Ultimately the 2.0-litre car is by far the quicker in a straight line, and with more pulling power through the mid-range it’s the lazier engine, too. This 230hp version is yours with front-wheel drive or Quattro four-wheel drive. There’s also a more highly-tuned engine specifically for the TTS, with 310hp and a serious performance boost. But, if anything, the TTS feels twitchier, overpowered and less enjoyable overall.

Finally, there’s a diesel option, which has proved popular with people looking for maximum miles per gallon. It offers no driving enjoyment, though, and although it’s quite smooth for a diesel, its noise and character don’t suit the car at all. It’s only really suited to drivers more interested in the TT’s looks than what it’s like to drive.

Surprisingly, the TT only scores four stars in official crash testing, with Euro NCAP giving it comparatively modest results across the board. It does get bonus points for its automatic post-collision braking system, but was criticised for lacking autonomous emergency braking and failing to prevent whiplash, particularly for rear-seat passengers. It did very well in the lateral impact test, though.

In the car’s favour are wide tyres with lots of grip, in conjunction with powerful brakes. Under braking the TT feels every inch the poised, stable sports car it aims to be, offering a reassuring reminder that it is a capable machine. In the real world, the TT has so much grip on most surfaces that it’s hard not to feel anything but completely safe.

There are two unique colours for the TTS: Vegas Yellow at £550 and Ara Blue, a crystal-effect finish priced at £775. Across the range, there are also Audi Exclusive paints for an eye-watering £2,025, or entirely custom shades from the customer’s own input, at £2,525.

Sport starts the range off with an impressive line of standard kit. The clever Virtual Cockpit is just one of its useful and forward-looking features. S Line adds some extra technology like LED headlights, and increases the aesthetic appeal thanks to larger wheels. It’s at S Line level that small but tempting features like the perforated leather gearknob appear, along with brushed aluminium trim inserts. Black Edition adds larger wheels again, plus a black styling pack, a Bang and Olufsen stereo and privacy glass.

The TTS may be the ordinary TT range performance flagship, with far greater straight-line speed and the fastest lap times, but it’s also an offshoot model. It ignores the Black Edition spec and takes the entry-level Sport as its base instead. It adds a lot of the same equipment as the other models, like the LED headlights, Active Lane Assist and automatic lights and windscreen wipers, but has a mid-range stereo and different, ‘Super Sport’ seats.

There is a TTS Black Edition as well, which takes the same ethos as the regular Black Edition and applies it to the TTS. UK customer demand is such that this top-spec trim package has been spread right across almost all of Audi’s cars.

The TT only looks wide because its roof is so low. Including the mirrors, it’s only six centimetres wider than an Audi A1, so it tends to make light work of car parks and city streets.

Fuel economy is good, even if it can’t match the official figures. The petrol engines average 35-40mpg in the real world, which, given the performance on tap, is not bad at all. The diesel is the clear choice for fuel economy, though, with a listed average figure of 60mpg translating to more like 50mpg on the road. Emissions are lower than you might expect.

The TT shares its drivetrain with many cars across the Volkswagen Group, so parts and servicing are easy to come by. The four-cylinder engines offer flexible servicing schedules, too. Audi’s dealer servicing rates can be expensive.

Audi rarely finishes as high up the reliability charts as it would want you to believe, thanks in part to the amount of complexity the firm builds into its cars. Main dealer servicing isn’t too expensive, but sourcing OEM-quality parts elsewhere is a good idea to reduce the blow.

Unsurprisingly, the TT isn’t terribly cheap. At £27,585 the entry-level 1.8 TFSI Sport offers by far the best value, being some £2,960 cheaper than the TDI diesel and £3,085 cheaper than the front-wheel drive 2.0-litre TFSI petrol in the same trim level. The most expensive Sport model is the TFSI petrol with Quattro and the S Tronic dual-clutch automatic gearbox, at £33,600.

As for the TTS, all models have 310hp and Quattro four-wheel drive. Prices start at £39,685 for a manual version and rise to £42,650 for a Black Edition with the S Tronic transmission.