When is a saloon not a saloon, but a coupe?

When they’re both the Mercedes-Benz CLA is a car that takes the A-Class hatch as a basis for creating a four-door 'coupe' and a five-door ‘Shooting Brake’ estate. Compact, classy and really quite attractive, the CLA is a just-about affordable way to land some premium German desirability on your driveway.

Did you know? Mercedes claims that the CLA has the most aerodynamically slippery body in current production.

The CLA is a slightly odd concoction, but a generally likeable one. The four-door ‘coupe’ version looks mostly very good (although there are one or two angles from which you can tell it’s a hatch with a bolted-on boot) and it’s just about practical enough to pass muster. It’s decent to drive and really well put together, but you need to be careful with the alloy wheel size if you’re going to maintain a decent ride quality. The Shooting Brake’s looks are beguiling, but don’t be fooled into thinking it’s practical. 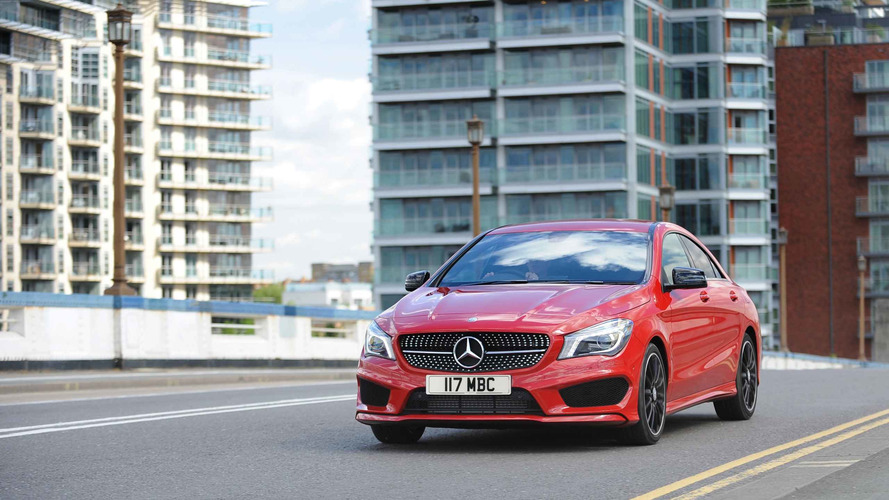 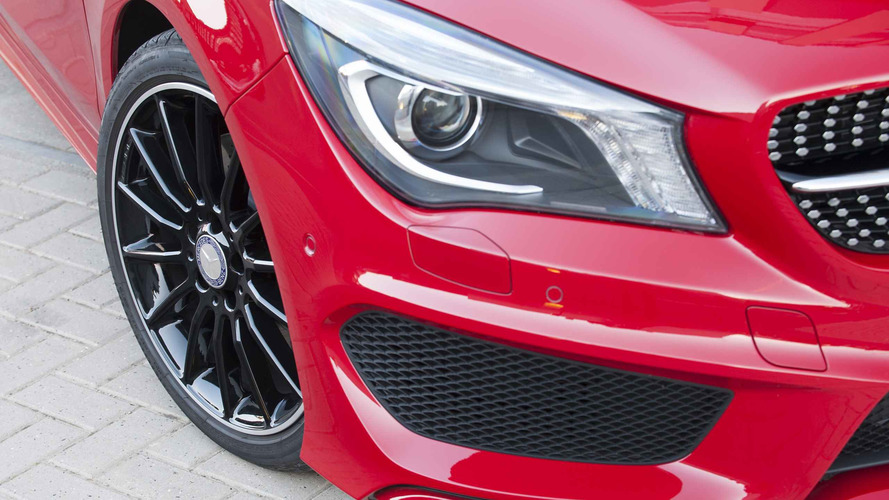 Look at the four-door CLA from almost any angle and you’ll think it’s gorgeous. It even manages the trick of not looking too much like the A-Class hatchback on which it’s based (and not even slightly like the taller, geekier B-Class MPV) mostly thanks to having a different grille and lights. That grille is larger, more aggressive and deeper-inset than that of the A-Class, giving no doubts about the car’s sporty intentions. Around the back though, you’ll find some slightly less flattering angles. Mercedes has, for the most part, integrated the separate boot well enough that it doesn’t jar, but from the rear-three quarter angle you can tell that this is a hatchback wearing a backpack.

That’s much less the case for the CLA Shooting Brake, whose elongated roofline means that the whole design gels much better, and arguably it’s the more desirable looking of the two models. Desire is, of course, the whole point – driving-wise, you’d be just as well off with an A-Class hatch, but the CLA looks more dramatic, sleeker, and has sportier styling. 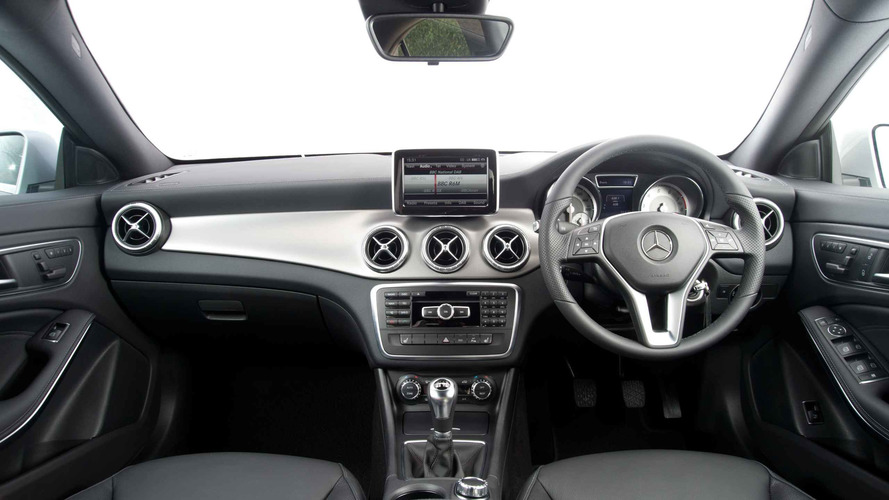 The CLA’s cabin is lifted basically wholesale from the A-Class, which has its good points and bad points. The good points are very comfortable front seats, a general sense of good quality, tidy design (slightly fiddly electronic parking brake aside), and the usual allure that comes with having that storied three-pointed star peppered around the place.

There are some pitfalls though. Fail to spend sufficiently on the options and the cabin can end up looking just a touch too bare and plain for comfort. Spend too much and you can end up with too-gaudy a cabin for taste (the optional white-faced instrument dials look both awful and cheap, for instance).

Practicality is not the CLA’s strong point, and we suppose from the point of view of it being a small, relatively affordable coupe, perhaps it shouldn’t be. Rear seat space is only just about adequate, to be honest. Adults will fit back there, but taller ones might not be too happy on a longer journey. At 470 litres, the boot isn’t bad, relatively speaking and it's certainly more than you get in, for instance, a Volkswagen Scirocco or a BMW 2 Series Coupe, but don’t go buying the Shooting Brake estate thinking that you’re going to add much to the CLA’s practicality – it has only an extra 25 litres of load space and has an annoyingly high loading lip, plus a very narrow, heavily-tapered hatch shape that makes loading larger items something of a chore. 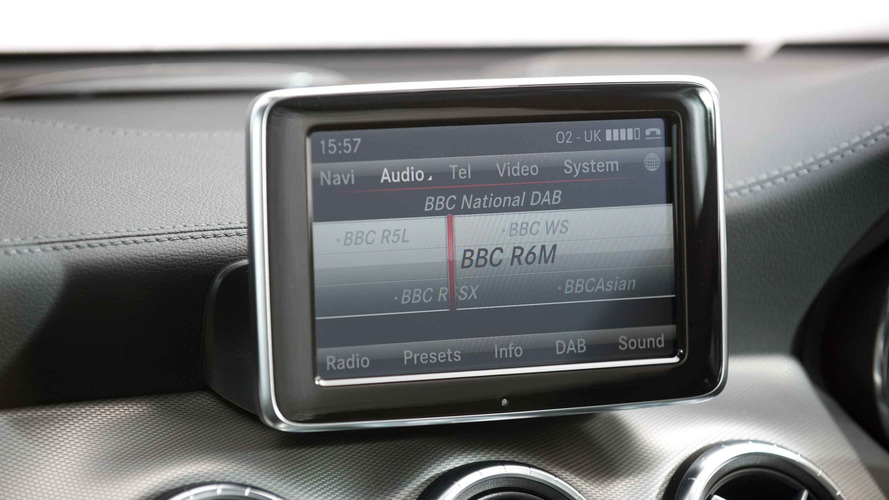 All CLA models come with the 'Mercedes me' connect services package including a live on-board diagnostics system that can detect any emerging issues with the engine and pass the details on to both you and your nominated dealer. There’s also a parking time assistant, which you can set to keep an eye on your paid-for parking and which will send you a reminder when it’s about to expire. Buyers can upgrade to the Mercedes me Remote Online services pack, which includes remote locking and unlocking via a smartphone app, ‘geofencing’, which allows you to set physical limits on where the car can be driven, a vehicle tracker, as well as trip computer and vehicle mileage info. The Comand Online system comes with 3D satnav (to which you can send pre-planned routes from Google Maps), live traffic information, an SD card slot and voice control, and also has Apple CarPlay and Android Auto. There’s optional DAB radio too, which really ought to be standard, and you can upgrade to a 12-speaker Harmon Kardon sound system The eight-inch central screen doesn’t look especially well-integrated, though, plonked on top of the dash in the manner of an iPad afterthought. 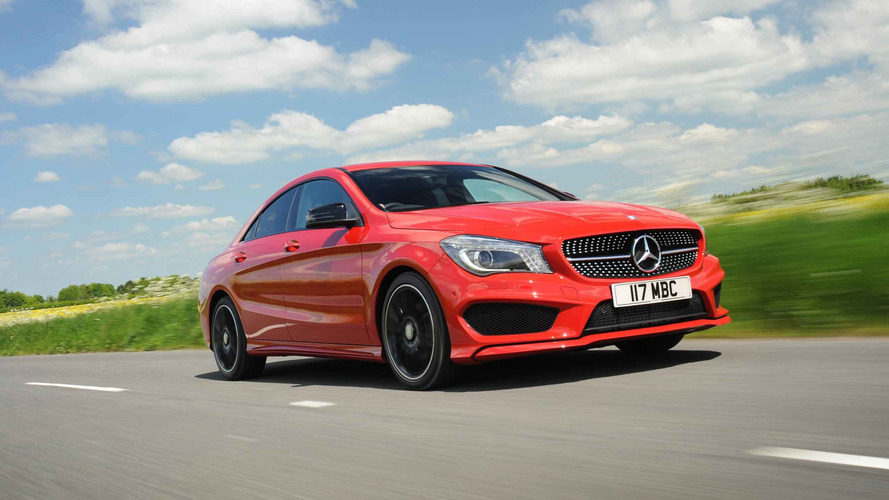 There’s a big caveat here, which is that what follows is heavily influenced by spec and wheel size. Go for a relatively basic CLA and it’s a really well balanced car. OK, so it’s limited in fun by its front-wheel-drive layout compared to a BMW 2 Series Coupe, but for the most part it’s really quite good – meaty, well-weighted steering with a touch of feedback and feel and a sensation that it does actually do a good impression of being a shrunken Mercedes C-Class, in that it rides with well-damped comfort and yet has sufficient body control and precision to be enjoyable. The optional 4Matic four-wheel-drive system gives extra options when it comes to slippery surfaces and finding extra traction.

All of which does fall apart just a little if you start dipping into some sections of the options list. Stick with the standard 18-inch wheel and suspension and all should be fine, but stray into the optional 19-inch rims and the lowered sports suspension and the CLA can become unyieldingly hard – harsh even.

Performance wise, there’s little to crib about. The basic 1.6-litre turbo CLA 180 petrol has a respectable 0-62mph time of 8.4 seconds, while the 2.0-litre turbo CLA 250 packs 218hp and sprints to 62mph in a decent 6.3 seconds. That's kind-of, sort-of an AMG model, so think of it as a half-way house to the full-on CLA 45. The diesel options include the 136hp 2.1-litre CLA 200 d, which is relatively pedestrian with a 0-62mph time of 9.1 seconds, but the larger 2.1-litre 177hp CLA 220 d can do the same sprint as quickly as 7.7 seconds. The smallest of the petrol engines will do nicely if you’re a low-mileage driver, but those who pound the motorways and main roads might well prefer the extra grunt of the bigger diesel options. That 2.1-litre engine is certainly powerful, but you do have to put up with quite a bit of extra noise, which is worth bearing in mind.

All versions can be fitted with the optional 7G-tronic automatic transmission, which not only frees up more interior space (thanks to its column-mounted selector), but which also does away with the manual gearbox’s awkward ‘lift-and-pull’ motion to select reverse. 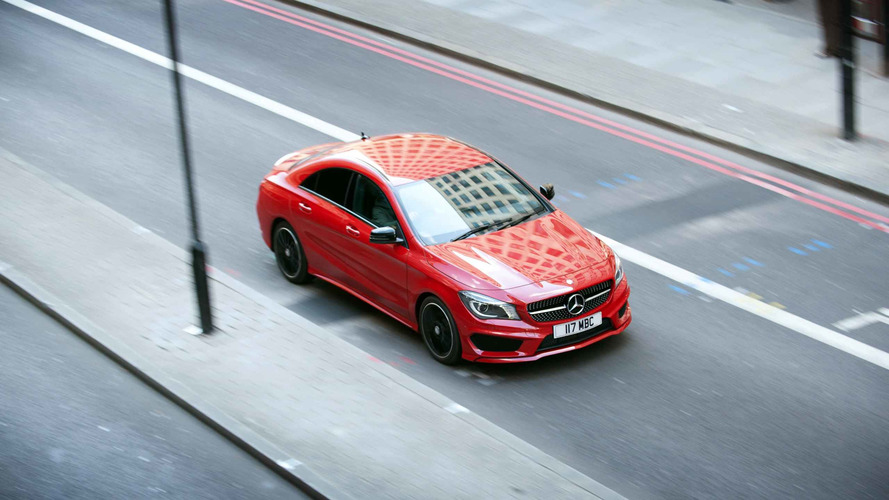 Mercedes is only out-done in safety reputation by Volvo, and even then not by much, so the CLA is a very safe car, in spite of being one of the smallest Mercedes you can buy. It was tested in 2013 by Euro NCAP and received a full five stars for safety, with a 91 per cent adult occupant rating, 75 per cent child rating, 74 per cent for pedestrian protection, and 81 per cent for safety assist. All models come with electronic stability control, brake assist, emergency post-crash lighting, dusk-sensing headlights, auto child seat recognition and two ISOFIX points in the back seat, and a tyre pressure monitor. You can spec your CLA with the Pre-Safe system that can detect an imminent collision and pre-tense the seatbelts, adjust the seat positions (if the car has electric seats) and close the windows if its thinks the car might roll-over. There’s also autonomous emergency braking, lane-keeping steering, a blind-spot detector, driver attention monitor, hill-holder brakes that also dry themselves in wet conditions, and active high-beam LED headlights. 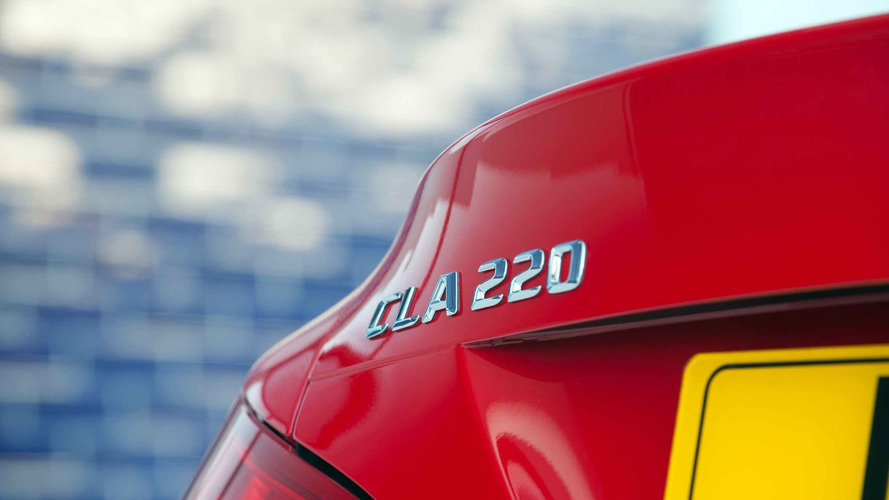 You can choose from Jupiter Red or Cirrus White in non-metallic, or Cosmos Black, Polar Silver, Mountain Grey, Cavansite Blue, or Orient Bronze in metallic. There’s also the option of Designo Polar Silver Magno as a range-topping colour. Buyers can also choose from black, dark brown, or black/beige mixed colours for the interior leather.

There is then a near-bottomless pit of optional extras (it’s a German premium car, what did you expect?) so tread carefully because the price of your CLA can balloon rapidly once you start ticking boxes. We’d stick with basic Sport spec, but add the larger infotainment screen and Comand services, the Lane Tracking and Driver Assistance packages, heated seats, and the LED headlights.

Being based on the A-Class means that the CLA is pretty compact, but watch that sloping rear end when parallel parking as it’s hard to see from the driver's seat. Standard parking sensors help, though. 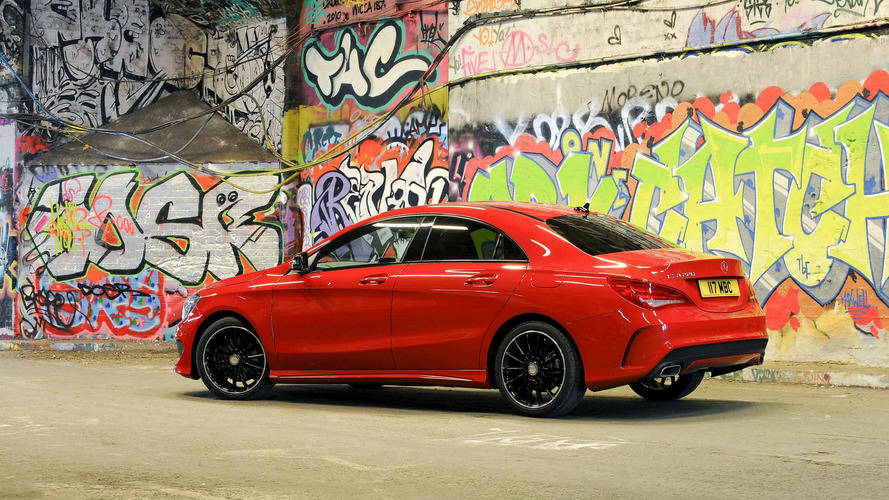 Those thinking that petrol is uneconomical to run compared to diesel might want to think again if they’re driving a CLA 180. The little 1.6 turbo is an efficient engine that can average 50.4mpg and emit 124g/km, which isn’t too shabby. The CLA 250 is, of course, rather worse off with CO2 emissions of between 143- and 160g/km (depending on whether it’s fitted with front or four-wheel drive), and best-case fuel economy of 40mpg.

The diesels are paragons of parsimony with a quoted 68.9mpg for the CLA 200 d and 68.3mpg for the CLA 220 d. Those engines achieve CO2 emissions of as low as 106g/km and 108g/km respectively, and it’s worth noting that all engines are at their most efficient when fitted with the optional automatic gearbox. 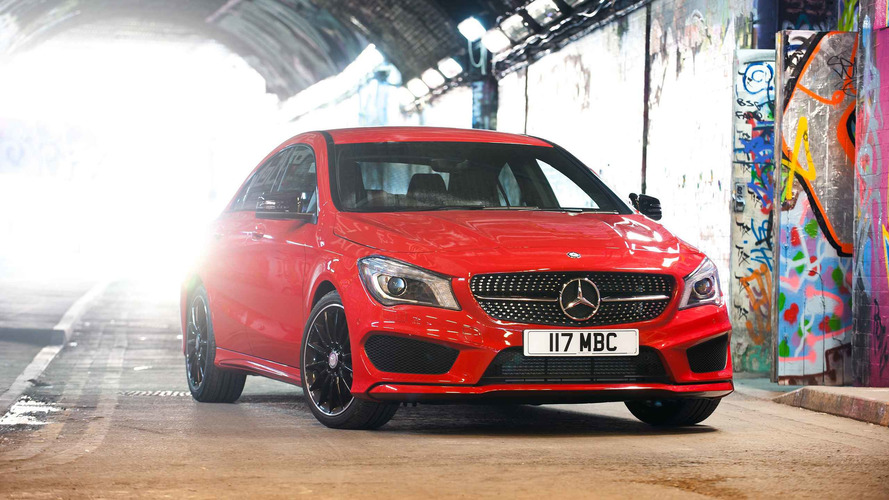 Circa £26,000 for a basic CLA coupe doesn’t seem like too bad value, considering that, while it might be a somewhat basic model in Sport spec, it does come with a full dose of glamour thanks to that styling. You’ll need to find at least £33,000 for a CLA 250, but then that is a much more overtly sporting model. Diesel prices start at a relatively affordable £28,000 for a CLA 200 d or £31,000 for a CLA 220 d, while optional 4Matic four-wheel drive costs around £900 depending on the model, and an automatic 7G-tronic transmission will cost around £1,500 for the upgrade. Just remember that, as with all premium German cars, the options list is lengthy and expensive.