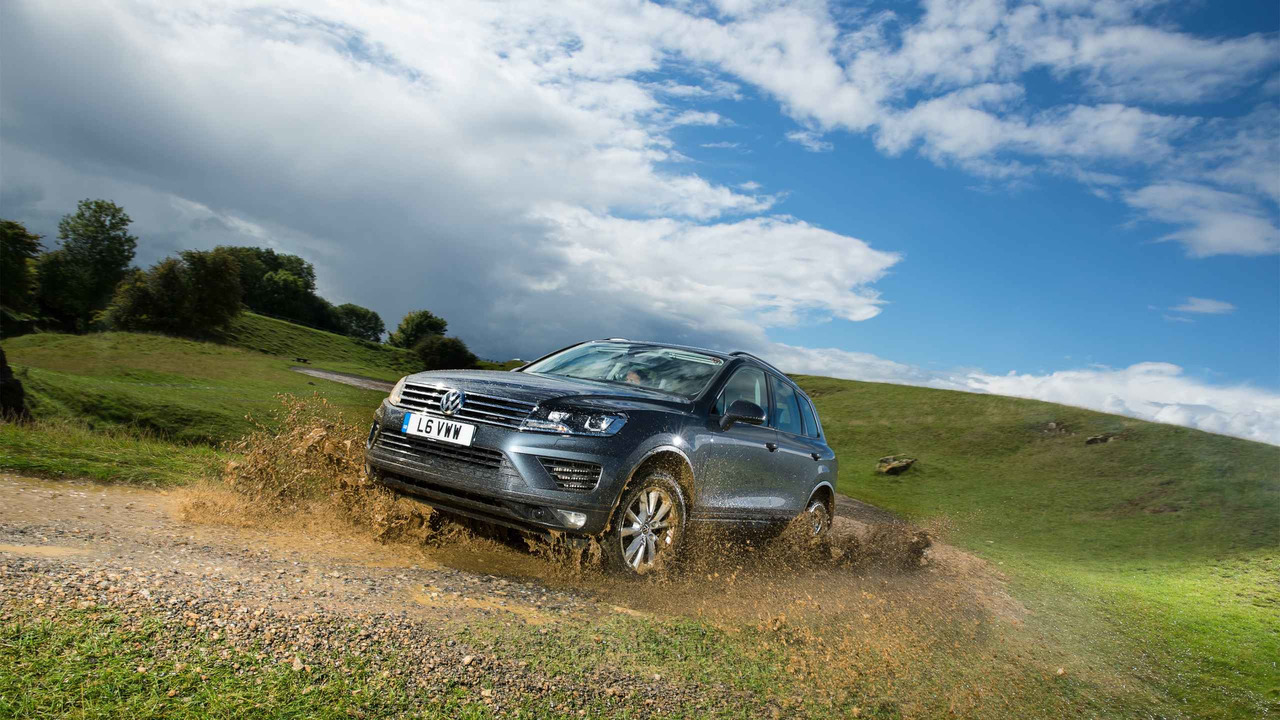 Likeable, but way behind newer rivals on interior finish, kerbside appeal and efficiency.

The Volkswagen Touareg is the largest SUV the company offers and it’s a typically polished product from a firm known for understated brilliance. The UK range is powered by just one diesel engine in two power outputs and all models come with four-wheel drive as standard. Equipment levels are fairly generous across the board, but the elderly Touareg is not one of the cheapest or most practical SUVs you can buy.

Did you know? The Touareg used to be fitted with a colossal 5.0-litre V10 diesel engine, developing 553lb ft of torque – enough to tow a Boeing 747!

Volkswagen originally developed its large Touareg SUV in conjunction with Audi and Porsche, but while it’s easy to recommend those companies’ Q7 and Cayenne contenders, it’s a little less clear what the Volkswagen’s defined USP is. Despite the fact that it is handsome, possessed of a quality interior, and decently refined in day-to-day driving, it’s expensive for a 4x4 that doesn’t come with a seven-seat option and it’s not particularly interesting to drive, either. So not only does it face a tough fight against its premium rivals from brands like BMW, Mercedes-Benz, Land Rover, and Jaguar, it is also now being squeezed by the excellent big seven-seat SUVs from Skoda, Nissan and Kia and Hyundai. Against all of those newer rivals, the Touareg is a hard one to justify.

No problems with image here, as this is a large, plush Volkswagen and therefore it exudes an air of class. It looks just as comfortable whether it is in urban confines or out in the sticks with mud slathered up its flanks and towing a horsebox.

As to the styling, the Touareg is inoffensive and nothing more. It was facelifted in 2014 to give it the lantern-jawed look worn by the newer products in Volkswagen’s portfolio and it was a largely successful move, although the company has since adopted familial design themes involving crisp, straight lines, which makes the Touareg’s smoothed-off soap-bar appearance a touch outmoded.

Volkswagen interiors are normally beyond reproach and the Touareg’s luxurious cabin is no exception. The dashboard is well-ordered and finished to a high standard, but it is a rather drab, slightly aged-looking dash by the standards of rivals like the Volvo XC60 or XC90 (both are arguably rivals), let alone the Audi Q7, Porsche Cayenne, and even more affordable alternatives like the seven-seat Skoda Kodiaq and Land Rover Discovery Sport.

All models get leather upholstery and there’s a suitably commanding driving position, too, with excellent visibility in all directions. There’s plenty of space for all occupants to lounge around in, with masses of elbow- and headroom throughout; however, adults won’t want to sit in the centre seat in the back, as the Touareg has a big transmission tunnel that leaves little room to place your feet.

The lack of a seven-seat option for an SUV as big as this is a serious oversight. While some rivals have five seats only, the ageing BMW X5 can be specified with seven chairs, and such an arrangement is standard on the Audi Q7 and the Volvo XC90, as well as significantly cheaper Korean competitors.

The boot is huge, if not class leading, with a minimum of 580 litres of capacity – this rises to 1642 litres with the back seats tucked away, an act that’s easy enough to do as the buttons to drop the backrests are located in the boot. The rear seats only split 60:40, though, and they don’t lie flat when folded, but they do slide backwards and forwards independently of each other. Finally, there are plenty of cabin storage areas up front and in the rear for stowing vital bits and bobs.

All Touareg models are fitted with sat-nav, displayed on a pin-sharp eight-inch TFT touchscreen called 'RNS 850 Connect'. This incorporates Google Street View and live traffic updates via an internet connection, and it also brings in DAB radio. Bluetooth phone connection is standard range-wide and controls on the steering wheel allow you to marshal infotainment sources without taking your hands off the wheel. However, wireless ‘Qi’ phone charging hasn’t yet made its way into the big Volkswagen, nor has Apple CarPlay or Android Auto.

An optional upgrade called Dynaudio Soundpack brings in 12 speakers, 600 watts of power and a 10-channel amplifier on the Touareg, for around £1,200.

This is where the Touareg shows its advancing years most readily. There’s no major issue with either output of the 3.0-litre V6 TDI engine, starting at 204hp and 332lb ft, and rising to 262hp and 428lb ft, as they both move the 2185kg mass of the SUV around with little issue. All versions also come with a silky eight-speed Tiptronic automatic and Volkswagen’s 4Motion all-wheel drive, making them easy to drive in all traffic and weather conditions.

But even on the smallest 19-inch alloys with 50-profile sidewalls, the ride is strangely lumpen. While the Touareg is never actively uncomfortable, there are many rival machines that are suppler when traversing poor road surfaces. So opting for the R-Line models, which get lowered sports suspension and bigger alloy wheels, will only make things worse. Air suspension is an option, but it’s not cheap.

And the mediocre ride quality isn’t paid off with sparkling handling, because even by large SUV standards the Volkswagen is an uninvolving drive. The steering and throttle response are geared to be light, and so there’s little in the way of feedback from the steering wheel that might encourage spirited driving. Body control is also merely good, rather than excellent, so in essence the Touareg is neither the sharpest vehicle to steer nor the comfiest thing in class.

Incredibly; this generation Touareg has never been Euro NCAP-tested, but the original model bagged five stars back in 2004 so there’s no reason to doubt this newer car would do the same. As standard, the basic Touareg comes with a decent level of safety equipment, such as anti-lock brakes, Automatic Post-Collision Braking System, the Driver Alert System that monitors fatigue, six airbags, ESC with traction control and an electronic differential lock, and a tyre-pressure monitoring system.

There’s also a huge array of up-to-date electronic driver assist systems, such as Front Assist, Lane Assist and Side Scan, Dynamic Light Assist, and Traffic Sign Recognition… but they’re all cost options. And Adaptive Cruise Control is a fearsome £1,800, unless you get it as part of the Driver’s Assistance Pack, which is more than £2,300. Some rivals will offer this sort of equipment as standard on their premium SUVs, so it’s a shame they’re additional extras here.

On the SE, the standard colour is solid Black and there are 10 paint options. On the R-Line and R-Line Plus, the no-cost shade switches to flat Pure White and the alternative hues are limited to six. Canyon Grey, Reef Blue and Reflex Silver are the metallic colours, while Deep Black Pearl and Moonlight Blue Pearl are also available, as is the special finish of Oryx White. The SE can also be painted in three further metallic hues, which are Dark Oak, Sand Gold and Tungsten Silver.

As already touched upon above, there are three specifications: SE, R-Line and R-Line Plus. SE models (from around £45,000) bring dual-zone climate control, leather trim, 19-inch alloys, cruise control, and the touchscreen satnav. R-Line, roughly £3,000 more, adds sportier interior and exterior styling, including 20-inch wheels, and 25mm lower sports suspension. R-Line Plus (another £1,100 or so) enlarges the wheels once more (to 21 inches) and adds some camera technology, plus different interior trim panels.

It’s definitely worth having the 262hp engine and then it’s purely down to whether you want better ride quality (SE) or sharper looks (R-Line). Buyers of large SUVs tend to have sober tastes so stick to silvers, greys and blacks for the exterior colour, giving the car the maximum possible resale value.

You’ll need a big garage because the Volkswagen Touareg is long, wide and tall. Electrically folding door mirrors are standard fit on all cars, so with them tucked in the SUV is 1940mm wide.

Don’t be fooled by the 204hp model’s supposed fuel advantages; in reality, it struggles to breach 30mpg because its less torquey engine has to work harder in daily driving to move the Touareg about. On paper, there’s not a huge gap between the lesser engine’s 42.2mpg official economy and 176g/km emissions, and the 262hp Touareg’s equivalent data of 41.5mpg and 180g/km. And yes, if you’re looking at those CO2 numbers and thinking they’re not particularly impressive… well, they’re not. It’s one area where the Volkswagen empirically lags behind most of the competition. So the Touareg isn’t hugely competitive for either VED or Benefit-in-Kind company car tax.

Although Volkswagen’s reliability record isn’t actually as unimpeachable as the man in the pub would have you believe, there’s little doubt the Touareg should prove relatively untroublesome. By current class standards, it is a relatively simple SUV on which not a lot can go wrong.

That’s good news, as the standard Volkswagen warranty is a regulation three-year/60,000-mile affair, although it can be extended by either one or two years and a maximum of 90,000 miles – but that full cover costs more than £1,700. Servicing isn’t too expensive and Volkswagen promises to price match any written quote from a garage within a five-mile radius of the dealership, provided it uses official Volkswagen parts. Alternatively, fixed-price servicing plans are available, with the option to spread costs over monthly payments.

The Touareg begins at £45,000 for a 204hp SE and this is our problem: for pretty much the same cash, you could sit in the far nicer, more advanced and seven-seat Volvo XC90 D5. Only the Touareg R-Line Plus with the 262hp mill surpasses the £50,000 mark without any extras fitted, but as we’ve already seen, the options list on the Volkswagen is both lengthy and costly so prices can quickly spiral. Not only that, but you could have the Skoda Kodiaq - also equipped with seven seats - with every luxury you could want including panoramic glass roof, tow bar, posh upholstery, much more modern infotainment, a much more efficient 187bhp diesel engine, dual-clutch auto 'box and four-wheel drive, with some £8000 or more to spare. At which point, you have to ponder why you'd go for the now rather outdated Touareg.