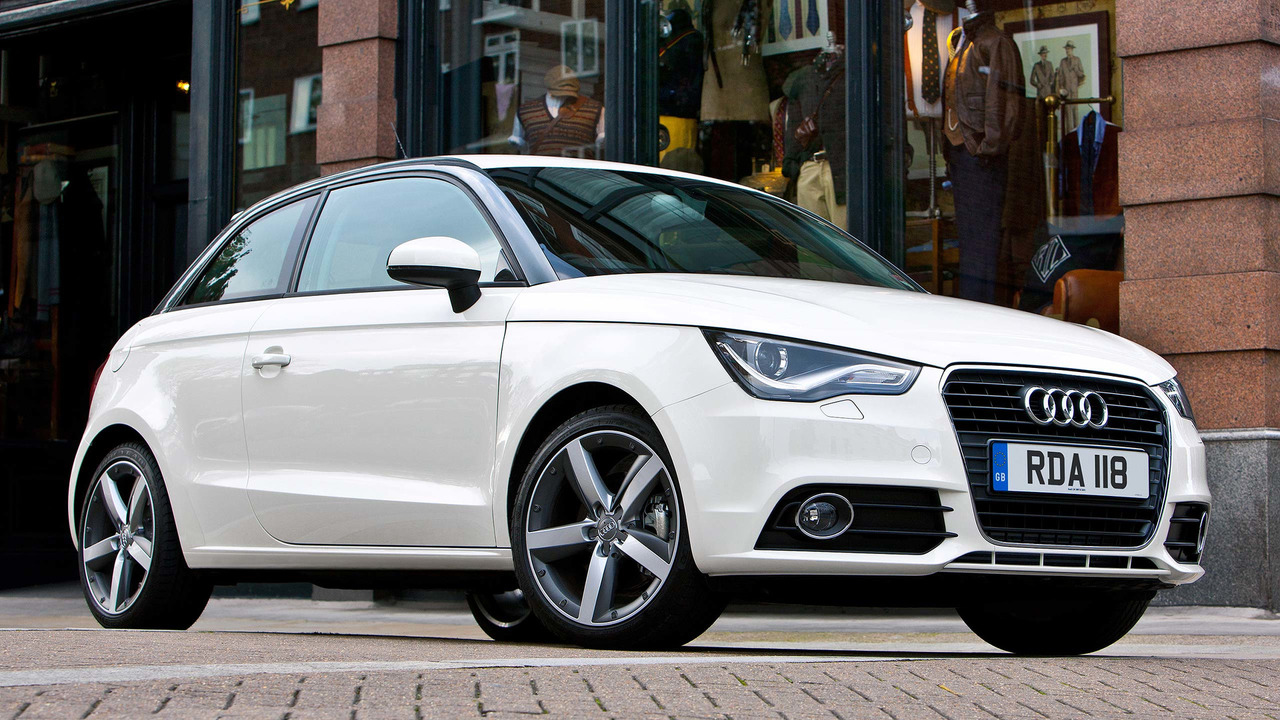 The style and image of Audi that can compete with the Mini.

Building the A1 was a sound move by Audi. Borrowing a platform and engines from parent company Volkswagen, Audi furnished the A1 with its own technologies and style, creating an upmarket car in a size to trouble Mini. Tens of thousands have sold across Europe since its launch in 2010, as buyers look to capture a slice of the good life without breaking the bank.

Did you know? Choose an Audi A1 with either the optional Bose sound system or the Technology Pack, and the boot capacity shrinks

The A1 is a great idea from a commercial standpoint, and its sales figures suggest it meets its brief well enough. However, while the interior is beautifully built, it’s short on features until prices begin to nudge £20,000. Also, ride quality of pricier versions with large alloy wheels is below the modern Audi standard. Style and image win plenty of points for the car, and it does offer something no one else quite does. However, value-seekers should note that other brands offer superminis that are at least as good, if not better in some areas, for considerably less money.

The A1 is a mix of mature, sober Audi lines and short, stubby supermini cuteness. Image is everything, so all models come with alloy wheels, even if the entry-level ones are a mere 15 inches in diameter. Two models are produced on this platform: the three-door A1 and five-door A1 Sportback. Both look good, although the three-door naturally responds better to sportier trim levels, larger alloy wheels and the like.

Buyers keen on Audi as a brand will engage with the fact that the A1 so clearly belongs to the four-ringed family. The design of the headlights, tail lights and bonnet mimic larger Audis, imparting some of their prestige on the littlest member of the tribe. It’s a good-looking car, even if it does look a little like a roller-skate when it’s on smaller wheels.

This is far from the only car to be guilty of odd specification choices for its entry trim grade, but for an Audi to lack a leather steering wheel is a poor show. The basic seats are little better. On the other hand, there is a stylish and unexpected touch in the shape of a retractable 6.5-inch media display screen on top of the dashboard.

The main issue with the A1’s interior, though, is that it just doesn’t quite feel up to the quality standard expected in, say, the A4. That’s an unfair comparison in one sense, given the price difference, but the larger cars set an example that lower and mid-range A1s can’t live up to. By comparison, the A1’s cupboard is bare, with scratchy plastics and a disappointingly bland centre console.

The circular air vents are a nice touch from an aesthetic point of view, but their plastic surrounds, which can be ordered in different colours, do nothing to add any higher sense of quality to the end product.

The A1 is a good deal larger than city cars like the Volkswagen Up, but it has just 19 litres more boot space than the plucky VW. With the seats folded down, the Up actually has more room. The extra space within the A1’s length doesn’t seem to have been given to rear passengers, either, whose knees are at risk if positioned behind a six-foot driver.

At least the boot aperture is broad enough and evenly shaped. There is a load lip, but it’s not so deep that it causes undue problems with loading baggage. For larger loads the rear seats are split 60:40 (50:50 in the three-door) and fold down – not quite flat but far enough to be useful. Also, there is no step between the boot floor and the rear seat-backs, making it easier to slide larger items in.

Clearly, with two extra doors and one extra seat, the Sportback is the more practical option. For a modest price increase, it’s worth it to gain easier access to the rear footwells, for example, where bags can be stowed for short urban journeys, with less risk of them sliding around everywhere.

While the A1 could use a few upgrades in terms of its interior quality, the on-board technology list makes for better reading. Automatic engine stop-start is standard, making the engines slightly more efficient. Audio equipment on the lowest SE grade includes the neat display screen that can be folded down out of the way if desired, plus DAB radio, MP3-compatible CD player, an SD card reader and an Aux port. There is no USB port, but there is a 12-volt socket for in-car smartphone chargers.

Heat-insulating glass in the front and sides is standard on all models, along with remote central locking and an anti-theft alarm. Sport, one rung up from SE, adds Audi Drive Select with three modes for greater efficiency, a sportier feel or to let the car make the decisions. This feature isn’t included with the 1.0-litre TFSI engine, though. Sport does get more media connections, however, with Bluetooth and a USB port compatible with modern iPods and other MP3 players.

A good range of likeable and effective engines are common to all Volkswagen Group cars, and in the A1 they range from the low-inertia, fizzy 1.0-litre turbocharged three-cylinder with 95hp to the extremely commonplace 1.6 TDI, in this fitment tuned to 115hp. There are also two versions of the familiar 1.4-litre TFSI petrol: one with 125hp and another with 150hp.

All these engines do a superbly effective job of providing easily-accessible power, but the larger engines also add outright performance. No A1 is slow, but the more powerful 1.4 TFSI borders on the entertaining. Where its gutsy performance comes from seems like a mystery from behind the wheel and it puts a smile on your face, but soon you wish the engine had a bit more aural character.

Unfortunately, the handling is spoilt by an unexpectedly poor ride. The A1 skips harshly over bumps and rarely feels settled if pushed hard around corners. It lacks the composure of larger Audis, and in those moments of skittishness over rough surfaces it doesn’t feel much like a premium product.

According to official crash testing by Euro NCAP, the A1 does particularly well for adult occupant protection and the availability of active safety systems, scoring 90 percent and 86 percent in those categories. Child occupants fare slightly less well, with a score of 79 percent, and pedestrians do relatively badly by modern standards, at 49 percent.

Overall, the A1 scores a maximum five-star rating. Every model gets adaptive brake lights that flash rapidly after an emergency stop to warn following drivers; front, side and curtain airbags; complex stability control with the ability to move braking force to different wheels and reduce any likelihood of either locking wheels or otherwise skidding; seatbelt monitoring sensors, plus brakes that automatically apply themselves after a big enough collision.

There is a huge variety of single colour and two-tone choices. The main palette is quite muted and dignified, split between whites and silvers at one end and greys, dark blues and blacks at the other, with only Misano Red as a bolder choice.

On top of that, buyers can plump for a contrasting roof line, depending on the body colour. Spanning the length of the A-pillar, the tops of the doors and the C-pillar, the contrasting colour adds interest to the overall design, making it look a touch more dynamic.

Finally, a fully contrasting roof is another option, with the choices depending, again, on the body colour. Black, grey and silver are the potential shades available across five body colours.

The range starts with SE, which is a little sparse apart from the retractable media screen. One thing that’s noticeable, though, is how all the basics are covered, with air conditioning, remote central locking, alloy wheels and a good infotainment system.

Sport trim is the one to go for unless the most upmarket appearance is paramount. If it is, S Line becomes necessary. But Sport has the key elements that define the A1’s interior and leaves money in the budget to account for optional extras like navigation.

As for the engine, the diesel isn’t well suited to frequent short journeys because of its particulate filter, which needs to get very hot to burn away harmful particulates – and can’t reach the necessary temperatures on short trips. The 1.0-litre petrol is adequate for a low-speed life, but runs out of breath on faster roads, making the cheapest 1.4-litre TFSI the best choice. All engines have a seven-speed S Tronic automatic option, but it’s expensive.

The A1 is wider than some superminis, helping give it a broader, more imposing stance and the look of a larger, more potent car from the front and rear. But that doesn’t make it too big to manage in the city. It’s short, visibility is good and it will slot into the average garage with ease.

All the engines do well on fuel if used gently. If pushed hard, their turbochargers suck in much more air, leading to much higher fuel bills. The automatic S Tronic gearbox option adds a tiny bit of efficiency in the case of the 1.4 TFSI engine, but takes it away on the diesel and 1.0-litre petrol. All engines should be capable of producing an average of 50-60mpg.

Audi dealers have a reputation for charging high prices for servicing and it’s often wise to supply your own oils and other consumables if you can source parts that meet or exceed Audi’s original specification. Variable servicing intervals are good news for light-footed, long-distance drivers, who can potentially stretch their services to two years apart. Urbanites are likely to find themselves needing a visit to the dealer at least once every year, though.

The A1’s insurance groupings are competitive for the 1.0-litre petrol engine, but a little high for the desirable 150hp 1.4 unit. The 125hp equivalent sits four groups lower, making it a more sensible choice.

The A1 has the same basic chassis and running gear as the Volkswagen Polo and Skoda Fabia, with a few small differences. It’s a proven and relatively uncomplicated platform, with a large dealer network should things go wrong. The 1.0-litre petrol engine is still relatively new, but the other two engines have plenty of miles and development under their belts.

At the bottom of the range, the £14,185 A1 SE is little more expensive than a similarly-specified mainstream supermini, but the low-rent interior makes that version feel like poor value. Sport trim starts at just over £16,000, and there are other small cars out there that give more equipment with no loss of style or reliability for less money. Some, like high-spec Hyundai i20s, even have arguably more upmarket-feeling interiors, but lack the correct badge for prestige.

S Line and Black Edition A1s really do feel expensive versus the competition, with the former starting from £18,555 and the latter from a very stiff £20,825. Upgrade the engines as well and the news gets even worse.

On the other hand, the A1’s pricing is fairly competitive compared to that of the Mini hatchback, but the obvious extra fashion-led pull of the Mini leaves the A1 looking stoic and pricey.