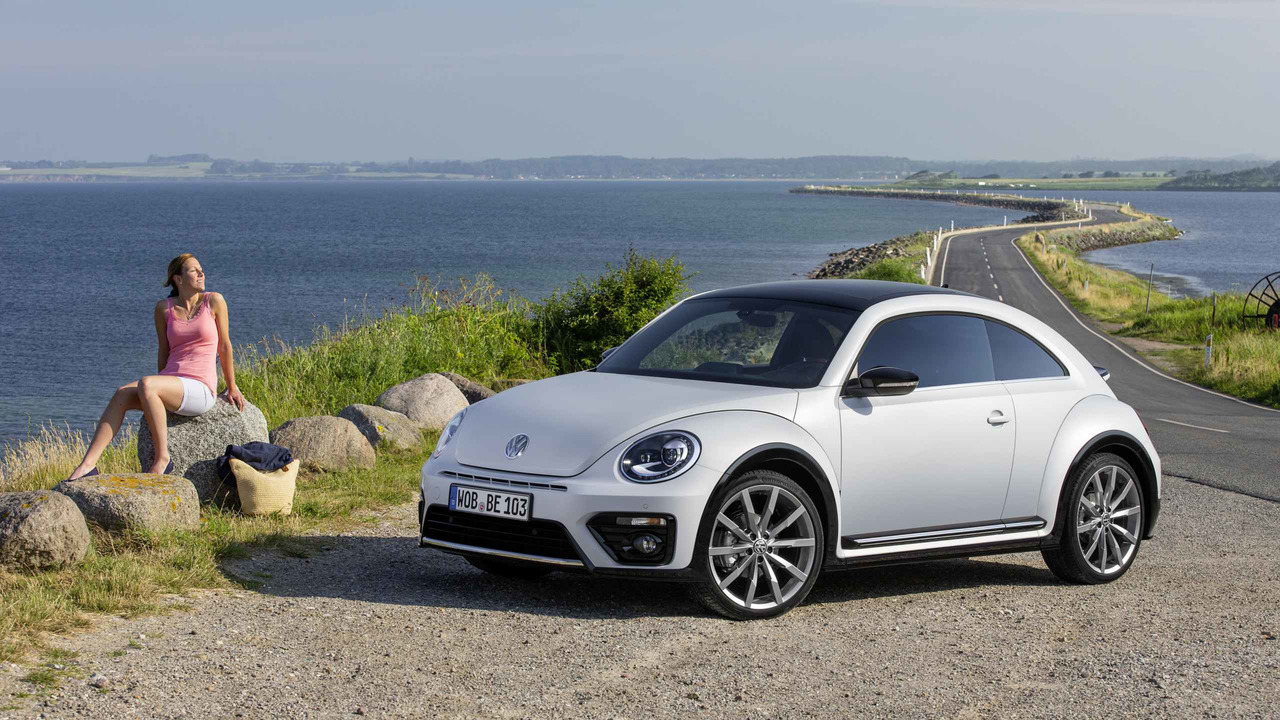 The current Beetle is the spiritual successor to the best-selling single car model of all time. The Type 1 Beetle’s 22 million sales may have been eclipsed by the Golf and Toyota Corolla since, but those are sales of multiple types and variants – the original rear-engined, air-cooled Beetle was only ever one model line. Volkswagen resurrected the idea in 1999, using modern front-drive mechanicals, and the current model is the second generation of the ‘modern’ Beetle launched in 2011. Self-consciously cool and retro, it’s an affordably stylish way to get about.

Did you know? As with the last of the original Beetles, the current model is built at Volkswagen’s factory in Puebla, Mexico.

The latest Beetle is a much more satisfying product than its 1999 forebear (and obviously far more modern and useable than a Type 1 original). It’s cool, stylish and just a little bit funky (even if the word ‘hipster’ will never be too far from some people’s lips…) and it’s better to drive by far than that 1999 version.

It’s limited by a lack of five doors (which, in fairness would spoil the styling) and a relatively staid line-up of engines. Dress the cabin up with options and it looks cool, but the basic versions are a bit too plain and functional for their own good.

In spite of its relatively affordable price tag, the Beetle is one of those cars that’s liable to encourage people to approach you for a chat about it as much as any Ferrari or Lamborghini. More so, in fact, thanks to its non-threatening styling. The 1999 Beetle took the circular cartoon-look theme a little too far (although everyone loved it at the time), but this model has some flattened-out surfaces and more than a hint of Porsche in its looks that really lifts the style. There is an almost endless line-up of stickers, decals, body kit and colour options, but we have a fondness for plain blue with steel hubcaps, just like the original. It’s a truly lovable car, which is not something you can say too often these days.

The nice thing about the Beetle’s cabin (aside from the general sense of quality and the extra space compared to the previous model) is that it really does look quite cool. The full-width dashboard trim can be specified with a colour either to match or contrast with the exterior, and there are lots of delightful 1950s throwbacks to the design and layout. The simple instrument stack works well and thanks to its MkVI Golf genes, there’s plenty of room up front and it’s comfortable on a long journey.

The boot has just 310 litres of load space (that’s around 70 litres worse-off than a Golf) and even though the rear seats split-fold 50:50, the sharply sloped rear styling and relatively small rear hatch mean that you’d going to find yourself stranded at IKEA unless you’re very precise with your tape measure. Seats down, the boot volume measures just 905 litres. Boot space shrinks further to 225 litres for the Cabriolet variant.

The rear seats are arranged in a strict two-seat layout, and while space isn’t as limited as you’d find in a three-door Mini, for instance, it’s very much more coupé than hatchback back there. Small kids will be OK (although their bulky car seats will eat up a lot of space), but taller passengers, in some cases, simply won’t fit. Perhaps some sort of chrome luggage rack attached to the boot would help…

It may look fifties-retro, but the Beetle is pretty up-to-date when it comes to tech. It’s actually based on the mechanical package and chassis of the old MkVI Golf, so you won’t get the very latest items, but you do get a 6.5-inch touchscreen as standard on all models, which includes Bluetooth connection for phone and audio, DAB radio, an SD card reader and a USB connection.

Also available as an option is the upgraded stereo with 400 watts of power, eight speakers and a sub-woofer designed jointly by electronics expert Panasonic and electric guitar legend Fender.

Keyless entry is also available as an option.

Thanks to riding on the sixth-generation Golf platform, the Beetle is far better to drive than its rather flaccid predecessor, but that’s not saying a lot. The steering is well-weighted and balanced, but it doesn’t have the fluid, fulsome feedback of the rival Mini and, mostly thanks simply to extra mass, doesn’t have the bouncy agility of a Fiat 500. Basically, it’s like a slightly lower-slung Golf to drive – solid and secure, but not what you’d call a ball of fun.

It does suffer slightly from refinement issues too, with quite a lot of wind and tyre noise at motorway cruising speeds.

The engine line-up is pretty limited. You can choose from 1.2 105hp or 1.4 TSI 150hp turbocharged petrol models, or a 2.0-litre TDI diesel with either 110hp or 150hp. Of those, we reckon that the 1.2 TSI is the pick of the pack – powerful and torquey enough not to feel lifeless, but frugal enough to make spending extra on a diesel rather pointless.

All models come with multiple airbags (plus a passenger airbag cut-off switch), post-collision braking (which stops your car rolling away after an accident), stability control, two ISOFIX child seat points in the back and a tyre pressure warning system.

So you'll probably have as much choice as you can handle when it comes to specifying the Beetle, and it’s doubtful that any two cars will be identical. Personally, we love the Design version with its body-coloured dashboard and those retro-look chrome-effect wheels, and we’d definitely get the Fender stereo upgrade. Go easy on the decals and stickers if you want to hang on to your resale value, though.

Although not as dinky as a Fiat 500, nor as tightly-dimensioned as a Mini, the Beetle is pretty compact.

By using the previous Golf chassis the Beetle once again holds itself back a little here, as it lacks the latest in aerodynamic tech and lightweight materials. Both emissions and fuel consumption are, overall, competitive but not exceptional.

The current Beetle has been recalled twice, for possible fuel leaks and for steering problems. That aside, the combination of Volkswagen’s traditionally good quality levels and the proven MkVI Golf mechanical package should ensure good longevity for the Beetle.

For servicing, Volkswagen offers a choice of two packages. For low-mileage drivers, or those doing mostly urban driving, it’s every 10,000 miles or once a year. For those doing higher mileages, it’s every 20,000 miles, with a two-year interval for the first major service and then annually thereafter. All Beetles come with a three-year, 60,000-mile warranty.

The Beetle’s pricing is a touch mixed – it’s a little more expensive than the most basic Mini, and significantly more so than a Fiat 500, but is roomier and better equipped as standard than either. There’s nothing in the range that gets much higher than about £25,000, but you can expand that price pretty easily by dipping into the options list. It’s also considerably less good value than a Golf, which is more sophisticated, roomier and better to drive.