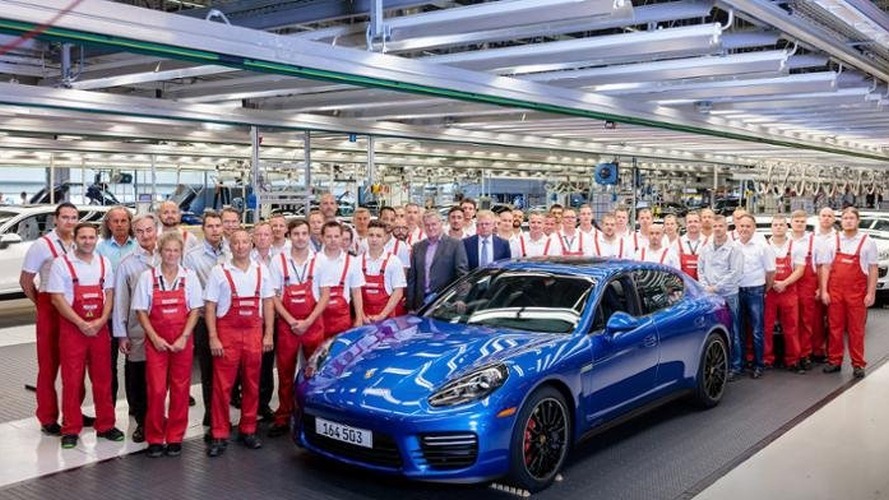 After seven years a new model is on the way.

The last example of the first-generation Porsche Panamera has rolled off the production line in Leipzig, Germany. The blue GTS model was number 164,503.

Production started back in April 2009. At the time, the Panamera was almost as controversial as the Cayenne SUV had been six years earlier. As the marque’s first foray into the luxury sports sedan sector, many enthusiasts saw it as a further dilution of the brand. Fortunately it was awesome, even if it did look like flattened toad.

More importantly it was hugely popular, as the Cayenne had been before it, Particularly in the United States and China where around half of all Panameras were sold. Indeed, most people in the People’s Republic associate Porsche much more with the Cayenne and Panamera than they do with the 911.

The Panamera wasn’t actually entirely manufactured in Leipzig. Bodyshells were produced at the Volkswagen plant in Hanover and transported to Leipzig for assembly. The second-generation car will be wholly produced at the plant alongside the Cayenne and Macan, and it is that car’s introduction that the decks are now being cleared for.

The new Panamera is indeed completely new from the ground up. The MSB platform and the twin-turbo V8 engines debut on the Panamera before being rolled out to other models in the VW Group portfolio. The infotainment and telematics are new, as well - and look awesome.

Crucially, the sheetmetal is all-new, fixing the original car’s biggest problem. Even though it’s exactly the same shape and looks near-enough identical to the old one from some angles, the new car is vastly more attractive. If still not actually pretty. But the Turbo has a deeply cool rear spoiler that folds out like something from Iron Man, which more than makes up for it.

Anyway, the new Porsche Panamera will make its public debut at the Paris Motor Show in October and go on sale later this year as a 2017 model.