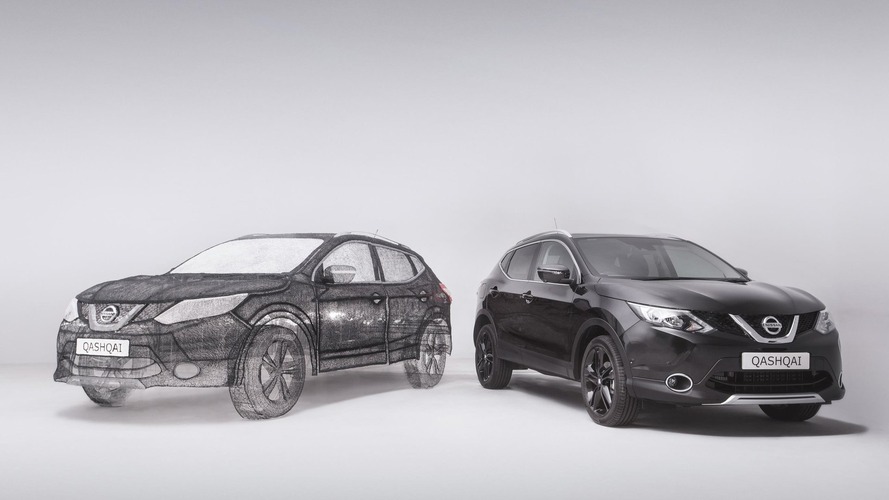 And it's the biggest such sculpture in the world.

Nissan enjoys a publicity stunt. Ideally one that involves breaking a record. Like reversing a Leaf up the Goodwood hill to break the record for the world’s longest reverse.

And for its latest attempt to grab some attention, it has commissioned the world’s largest sculpture created using a 3D pen.

A 3D pen is essentially a hand-held 3D printer, feeding out a string of melted plastic that quickly cools into a solid structure. A team of artists led by 3D pen specialist Grace Du Prez spent 800 hours creating a replica of the new limited-run Nissan Qashqai Black Edition crossover.

The Black Edition is based on the top-spec, leather and satellite navigation-equipped Tekna model. It’s essentially a styling package, with black and silver detailing and 19-inch Ibiscus wheels, finished in gloss black. A panoramic roof is available, as well. There’s the usual choice of small-capacity gas and diesel engines under the hood.

The sculpture is full-size, measuring 173 inches (4.4 meters) long and 63 inches (1.6m) tall. It’s as accurate as it could possibly be made, too, with only the Nissan badge being added to the front ‘grille’. The strings laid down to create it total 8.6 miles (13.8 kilometers) in length.

Incidentally, make those 800 hours the sculpture took to create linear, and the factory in Sunderland, England which builds the Qashqai would have turned out 46,400 copies of the real thing - that’s 58 per hour. Plus the four other model lines that are built there. Small wonder it’s regarded as one of the most efficient car factories in the world.

“At Nissan we always encourage initiatives where design can be expressed through new and innovative technologies,” said Koji Nagano, Vice President of Nissan Design Europe. “The artistic team have certainly pushed the boundaries of 3D pen technology in creating an impressive sculpture of our premium Qashqai Black Edition.”

You can argue about whether or not this will sell any cars. But it may well sell some 3D pens.