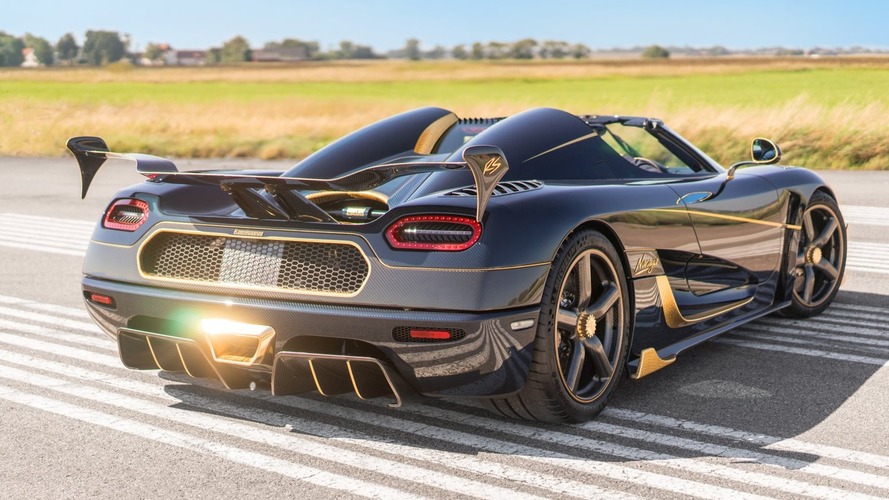 This is the very first Koenigsegg Agera RS to be delivered to a European owner, who called it Naraya and had it gilded.

That’s right: all that appears to be gold in these images really is genuine gold leaf. It was applied at the Koenigsegg factory by Ettore Callegaro, an Italian artisan known for such work on cars and motorcycles. Apparently the process took 12, 12-hour days to complete.

Besides the 18-carat trim, the exterior is finished in blue-tinted clear carbon fiber. And so, too, is the chassis tub, something which has never been done before. Probably because it’s almost entirely pointless, as most of the tub will only ever be seen by a mechanic. But it’s that kind of attention to detail that takes a car to the next level.

Inside, the seats are finished in blue Alcantara with gold piping, and there's yet more gold leaf trim. Including a Naraya nameplate that’s also set with 155 cultured diamonds.

And all this from the mid-range Koenigsegg. Of which only 25 will be built, all of which have been sold.

The Agera RS carries a sticker price of $1.65 million and it wouldn’t be at all surprising if the options here added another half-million or more to that. According to Koenigsegg, the name Naraya carries great meaning for the owner and his family - enough to spend that kind of money honoring it.

The Naraya will make its debut at the Salon Prive Concours d'Elegance in England this weekend. The first Agera RS to arrive in the United States - dubbed Agera XS - recently appeared at Pebble Beach.