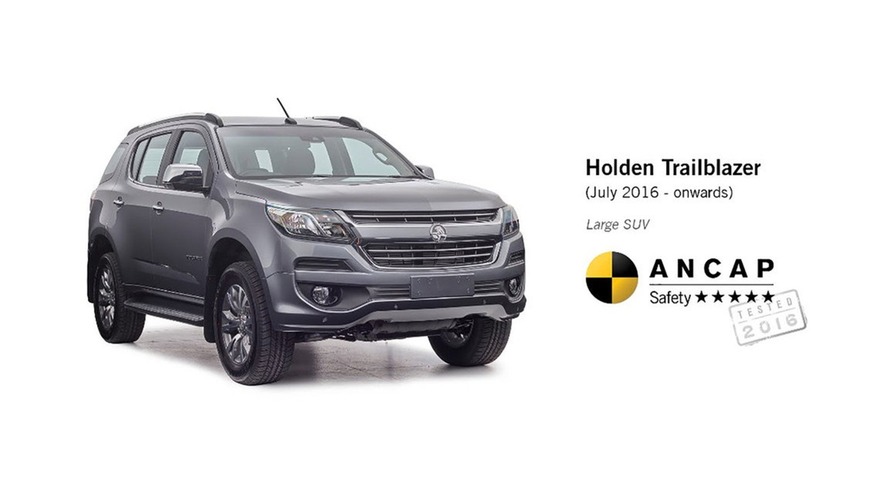 Wasn't due to be unveiled for another few weeks.

The 2017 Holden Trailblazer SUV has been revealed weeks ahead of the intended launch, as the Australian crash safety rating agency announced the results of its tests on the model.

Holden may not be too happy about its new car being leaked by an outside agency. But it will no doubt be pleased the Trailblazer earned a five star rating from the Australasian New Car Assessment Program (ANCAP).

Holden promised the Trailblazer would be a classier proposition than the Colorado 7 it replaces, and the image you see here bears that out. The front-end styling, featuring a wider, more angular grille, lends the Trailblazer a broader, more solid stance. The trim is more sophisticated too, with flashes of chrome dotted about.

We haven’t seen the interior yet, but better-quality materials and more car-like design than that found in the Colorado 7 are likely.

Underneath, it’s rather more rugged than the styling suggests, using a separate chassis shared with the latest Colorado pickup truck - not be confused with the U.S. market Colorado. Indeed, the Trailblazer’s sheet metal is pretty much identical to that of the double-cab Colorado, right the way back to the C-pillar. Extra metal is grafted on from there to create the Trailblazer’s station wagon body.

The Trailblazer first launched earlier this year in Brazil, wearing a Chevrolet badge. Pickup-based SUVs are popular in developing countries and harsh environments as they’re cheaper and more rugged than unibody SUVs. Holden will be hoping the transition to Trailblazer will revive sales that have slipped against other truck-based SUVs like the Ford Everest, Mitsubishi Montero Sport, and Toyota Fortuner.