Very last Renault Sport Megane on sale in the UK

The great hot hatch is going to a well-deserved retirement.

Over the weekend Renault announced the final example of the third generation Megane RS hot hatch has rolled off the Palencia production line on 6th July. It turns out the very same vehicle is now on sale in the United Kingdom.

After almost seven years on the market and around 30,000 sales, the current Megane RS is going to a well-deserved retirement. You still have the chance to own a brand-new third-gen Megane RS that comes nicely equipped with 19-inch Speedline alloy wheels with Michelin Pilot Sport Cup 2 tires and Ohlins Road&Track adjustable dampers. It is available at Arnold Clark Renault Dundee. 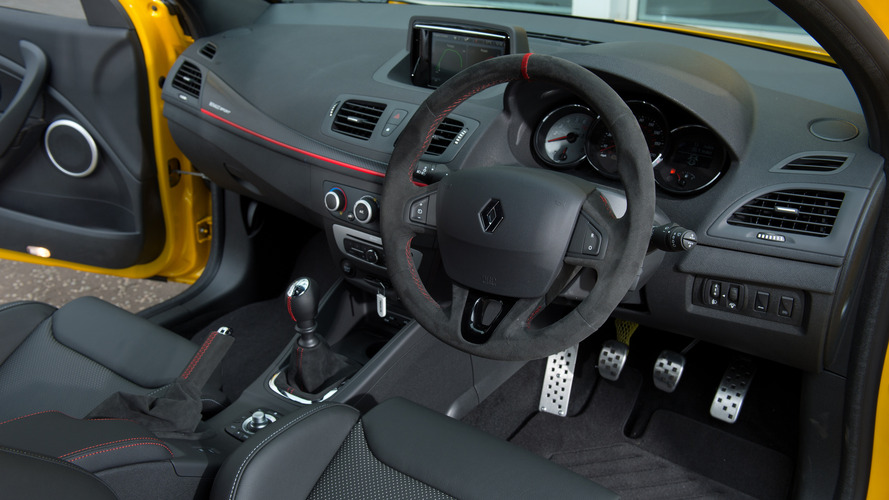 The right-hand-drive 275 Cup-S model is motivated by the familiar 2.0-liter, 275-horsepower (202 kilowatts) turbocharged petrol engine. This is the same unit that powers the limited-edition 275 Trophy-R, which was the fastest FWD car to go around the Nurburgring back in June 2014 with a time of 7 minutes and 54.36 seconds. Just as a reminder, currently the Volkswagen Golf GTI Clubsport S is the record-holder on the track with 7:49.21 minutes.

The last ever produced third generation Renault Mégane Renault Sport has rolled off the production line in Palencia, Spain and is now on sale in the UK at Arnold Clark Renault Dundee.

This is in addition to the standard Cup-S specification such as the uprated Cup chassis and PerfoHub double-axis front suspension. The Cup Chassis Pack with mechanical limited-slip differential, red Brembo four-pot brake calipers, firmer springs and dampers and a stiffer anti-roll bar all make it ideal for circuit use. Inside, the 275 Cup-S is fitted with a Renault Sport analogue rev counter and speedometer, drilled aluminium pedals and the three-mode Renaultsport Dynamic Management system.

The 275 Cup-S is powered by the same 2.0-litre, 275hp turbocharged petrol engine as the limited-edition 275 Trophy-R which, in June 2014, shattered the lap record for a front-wheel-drive production car around the 13-mile Nürburgring Nordschleife with a time of 7 minutes 54.36 seconds. Acceleration from 0-62mph is attainable in 6.0 seconds and the top speed is 158mph.

David Munton, Arnold Clark Renault Franchise Manager, said: “It’s great to have the final third generation Mégane Renault Sport to ever be produced in our showroom – it looks sensational in Liquid Yellow and the optional Öhlins dampers and Michelin Pilot Sport Cup 2 tyres are sure to be thrilling to drive on road or on track. As a long-time Renault Dealer, we know first-hand that Renault Sport fans are passionate about the brand, so we doubt this special Mégane Renault Sport 275 Cup-S will stay in the showroom for very long.”

Jeremy Townsend, Communications Director, Renault UK said: “The Mégane Renault Sport has proved popular with critics and owners alike since launch for its focused nature and involving driving experience. The UK is one of the biggest markets in the world for Renault Sport models so it’s fitting that the last ever third generation Mégane Renault Sport should end up here.”

Having first gone on sale in the UK in 2009 as the Mégane Renault Sport 250, the third generation Mégane’s power has been boosted twice – to 265bhp in 2012 and finally up to 275bhp in 2015. From the 250 to the hardcore 275 Trophy-R to the latest 275 Cup-S , over 30,000 of the third generation Mégane Renault Sport have found homes in over 30 different countries across Europe, Australasia and the Pacific.

History of the Renault Sport Mégane

The fourth generation All-New Mégane went on sale in the UK this summer with the range topped by a GT 205 Nav version that has been engineered by Renault Sport – complete with 4Control four-wheel-steering, EDC transmission and all-in-one sports seats. An announcement on a fourth generation Mégane Renault Sport will be made in the future.

The full specification of the vehicle for sale is: