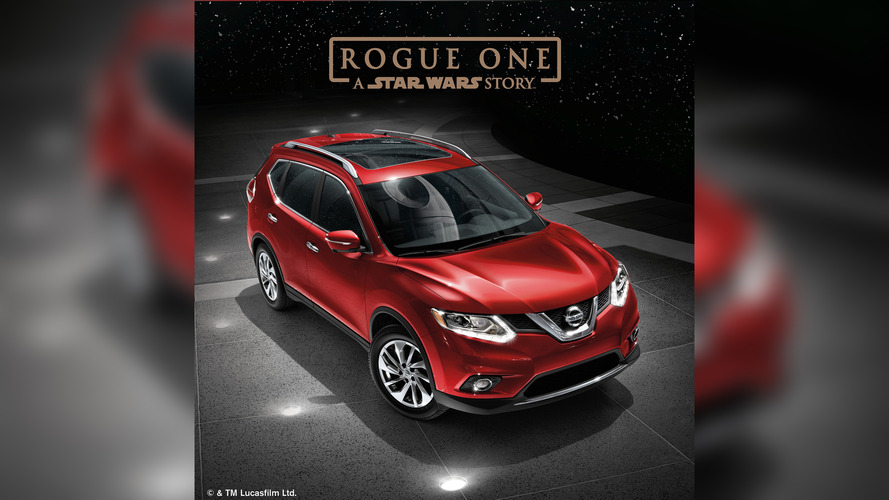 Nissan's crossover doesn't seem like a good replacement for an X-Wing, but the automaker is ready to help with the Rebel's fight.

You don’t need Jedi powers to see the natural cross-promotional opportunity between the Nissan Rogue and the upcoming blockbuster Rogue One: A Star Wars Story. The brands are taking advantage of the opportunity, too, because Nissan is among Lucasfilm’s partners for publicizing the film, which opens December 16 in the United States.

Rogue One is not a sequel to last year’s Star Wars: The Force Awakens. Instead, the new film takes place around the time of Star Wars: A New Hope (the original). It tells the story of the group who steals the Death Star’s plans.

Neither Nissan nor Lucasfilm are providing any specific details about the cross-promotion yet, but the automaker’s teaser image (above) shows a Rogue with the Death Star’s reflection on the windshield. We hope Nissan does something fun with the campaign. Perhaps Darth Vader, who appears briefly in the trailer, could get behind the wheel of a black GT-R. The company could also advertise the new Titan by driving it through Tatooine’s vast desert and maybe even jump over the Sarlacc Pit.

Lucasfilm’s other promotional partners on the film are Duracell, General Mills, Gillette, and Verizon. After the huge success of The Force Awakens last year, expect it to be hard to avoid advertisements for Rogue One as the premiere gets closer.

SAN FRANCISCO, Calif. — Lucasfilm announced today that it is teaming up with five of the world's most well-known brands — Duracell, General Mills, Gillette, Nissan and Verizon — for the launch of an extensive global promotional campaign in support of "Rogue One: A Star Wars Story," opening on December 16.

"We are extremely pleased to be working with such a remarkable group of promotional partners for 'Rogue One,'" said Lynwen Brennan, general manager of Lucasfilm. "This first in a series of Star Warsstandalone films represents an exciting new era for both Star Wars and Lucasfilm, and the partners joining us on this exciting journey have each designed a stellar campaign capturing the spirit and camaraderie of 'Rogue One.'"

With their specific, custom-designed campaigns and innovative programs, the five internationally respected global brands are poised to complement the tempo and tone of the overall marketing campaign of this first-ever standalone Star Wars story.

Duracell
Founded in the 1920s, the Duracell brand has grown to be the leader in the single-use battery market in North America. Its iconic brand is known the world over. Its products are trusted in the devices that keep people connected, protect their families, entertain them, and simplify their increasingly mobile lifestyles. The Duracell Company is owned by Berkshire Hathaway, a $210B holding company owning subsidiaries that engage in diverse business activities. Visit www.duracell.com for more information.

Gillette
For over 110 years, Gillette has delivered precision technology and unrivalled product performance – improving the lives of over 750 million men around the world. From shaving and body grooming, to skin care and sweat protection, Gillette offers a wide variety of products including razors, shave gel (gels, foams and creams), skin care, after shaves, antiperspirants, deodorants and body wash. For more information and the latest news on Gillette, visit Gillette.com.

Nissan Motor Co. - North America
Employing more than 37,000 team members in U.S., Canada and Mexico, Nissan's operations include automotive styling, engineering, consumer and corporate financing, sales and marketing, distribution and manufacturing. Nissan leads the world in zero-emission mobility, dominated by sales of the LEAF, the first mass-market, pure-electric vehicle. It is the best-selling EV in history. More information on the complete line of Nissan vehicles, our services and commitment to sustainable mobility can be found online atNissanNews.com.

Lucasfilm, the Lucasfilm logo, STAR WARS and related properties are trademarks and/or copyrights, in the United States and other countries, of Lucasfilm Ltd. and/or its affiliates. ©2016 & TM Lucasfilm Ltd. All Rights Reserved.

About "Rogue One: A Star Wars Story"
From Lucasfilm comes the first of the Star Wars standalone films, "Rogue One: A Star Wars Story," an all-new epic adventure. In a time of conflict, a group of unlikely heroes band together on a mission to steal the plans to the Death Star, the Empire's ultimate weapon of destruction. This key event in the Star Wars timeline brings together ordinary people who choose to do extraordinary things, and in doing so, become part of something greater than themselves.