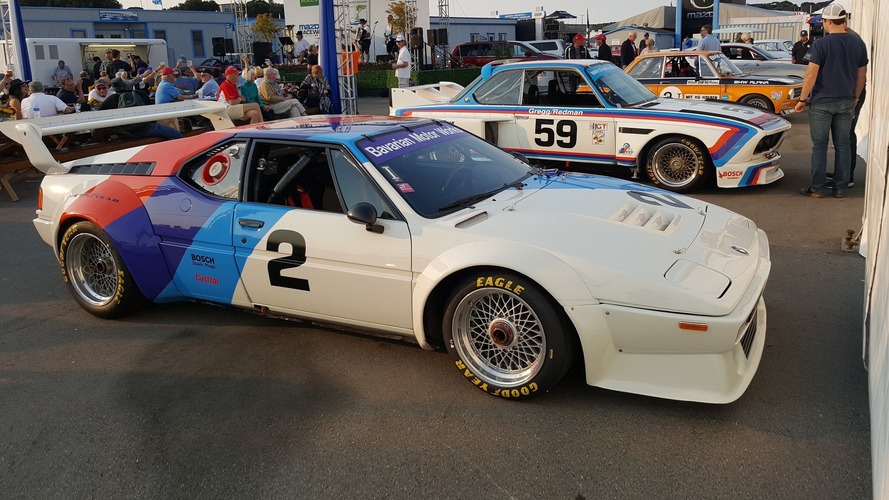 For fans of the roundel and the most powerful letter in the world (M), the BMW USA Classic: Living Legends Garage event was magical. BMW USA Classic brought out a collection six of the most significant race cars in the company's history, campaigned in a variety of series over the decades. BMW assembled a range of executives, designers, and racers to talk about cars that motorsport fans cheered on, a significant street cars and concepts that everyone was amped to see.

The evening kicked off with a presentation surrounding the highlights of BMW's 100 year history. Once a small aircraft engine manufacturer, dedication and advanced engineering have driven the company to financial success and motorsports victories.

But the assembled crowd came to see and hear stunning race cars, not for lists of accomplishments. BMW drivers fired up each race car, parading them around a runway constructed for just such a display.

Not to be outdone, a handful of important BMW products graced the stage. First was a 1975 BMW 2002 Turbo in pristine shape, reminding all what a light chassis can do with only 170 horsepower. Next up was a car formerly owned by Elvis Presley while stationed in Germany. The car was modified by Presley, with a Chevy motor and non-factory red paint. Today, the vehicle has been restored to original specifications, with a BMW powerplant. Lastly, the 3.0CSL Homage Concept, in new guise as the "Turbomeister" a clear reference to famous Jagermeister-sponsored BMW race cars.

We look forward to seeing all of the BMW ensemble tackle the corkscrew.

On a random side note: We happened to catch six of the BMW USA Classic race cars storming up Carmel Valley Road, with a police escort. That's a memory we won't soon forget.