Renault returns to Bonneville after 60 years, breaks another speed record 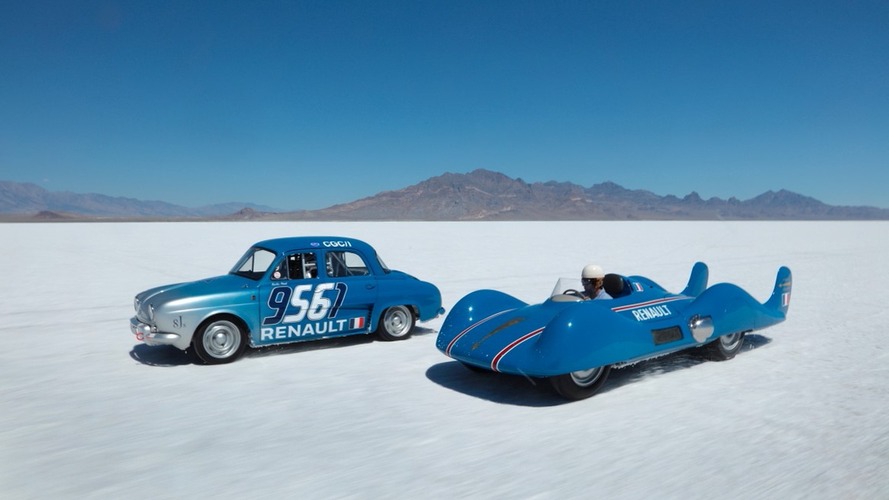 Renault broke four speed records in 1956 - now it can add another one to that list.

Between 1954 and 1955, Renault began testing on a car dubbed the Etoile Filante - French for 'Shooting Star.' It was a vehicle that would push the limits of speed and engineering, and (hopefully) lead to sales of the Renault Dauphine in the U.S.

It was powered by a 270-horsepower gas turbine created by French aeronautical turbine manufacturer Turbomeca. The exterior was polyester, crafted carefully on top of a tubular frame, both of which chosen specifically for their light qualities.

In 1956, after two years of testing, the Etoile Filante achieved a world record speed of 191 mph (308.9 km/h) at the Bonneville Salt Flats in Utah. It was the fastest speed a gas turbine-powered vehicle had ever achieved, and broke four speed records in the process, two of which still hold to this day.

60 years have come and gone since then, and in honor of that historic day in 1956, Renault returned to the salt flats with both the iconic Etoile Filante and a race-ready Dauphine for Bonneville Speed Week. In the process, the company broke another record.

Driven by Frenchman Nicolas Prost, the Renault Dauphine was clocked at 76.451 mph, a new record for the Classic Gas Coupe (CGC) class for cars produced between 1928 and 1981 with an engine capacity of between 754 cc and 1,015cc.

For Renault, it was further proof that “passion has no age!"

The Renault Etoile Filante* has returned to the Bonneville Salt Flats in Utah, USA, where, six decades ago, in August 1956, it famously clocked up a speed of 308.9kph to establish four new world records, two of which stand to this day.
Meanwhile, to celebrate the American career of the Renault Dauphine, which is also celebrating its 60th anniversary this year, Renault Classic dispatched a Dauphine to the Bonneville Speed Week (August 13-19) where Nicolas Prost established a new class record**, proving that passion has no age!