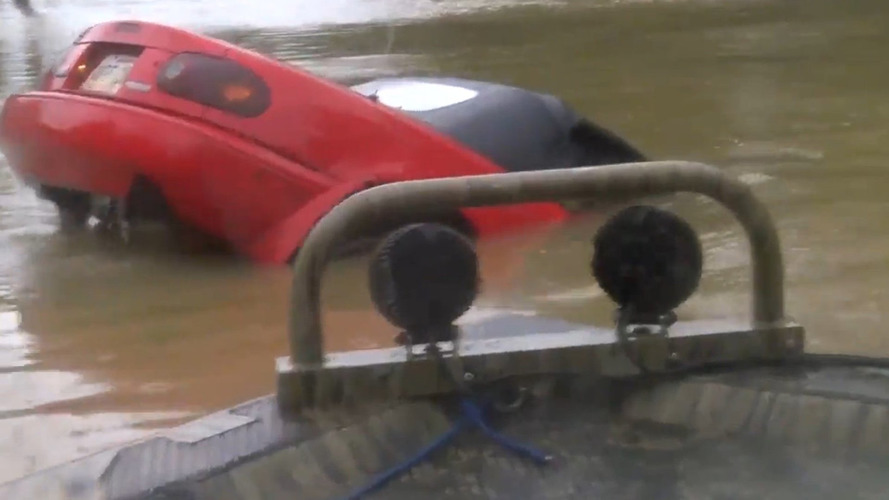 And her dog, too.

Torrential rain has caused severe flooding in Louisiana over the last few days. A number of rivers burst their banks, swamping many towns across the state.

On Monday, local officials reported that at least five people had died and up to 20,000 had been rescued from their homes and cars.

Here we see one such rescue, which happened in state capital Baton Rouge. And rather dramatic it is, too. A female driver became stranded in her Mazda Miata, which started to sink as flood waters rose.

Volunteer rescuers were able to approach the stricken car in a boat. At first they attempt to break a window to get the woman out; when that fails they try to cut through the roof.

One of the rescuers takes the risky move of getting off the boat and onto the car so he can cut through the roof. That, of course, lets water into the car, but the driver is able to get her hand out through the hole and she is pulled up to the surface as the Miata sinks to the bottom.

She’s understandably concerned about her dog, which was in the car with her; fortunately, it appears at the surface a few seconds later.

We don’t know how this driver came to be stranded in the flood. But it goes without saying you should never attempt to drive through a flood, especially if it’s moving quickly. It only takes an inch or two of water to carry off a dump truck.

Be safe out there.