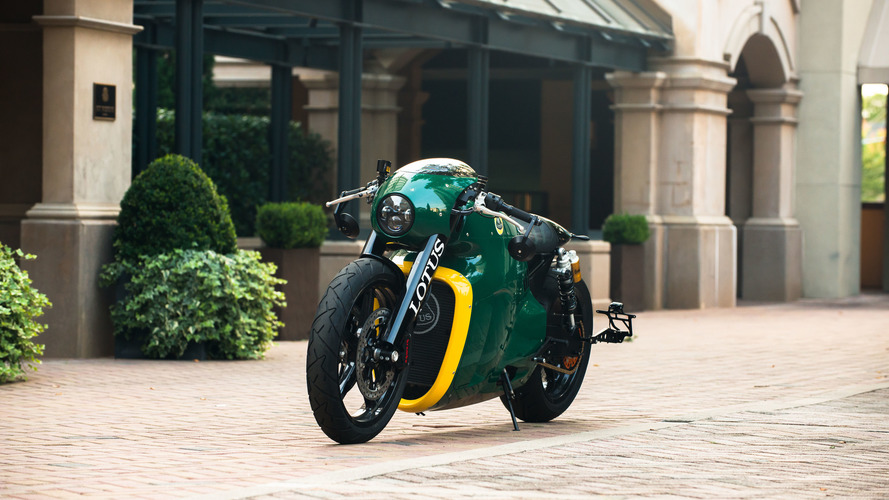 No one has ever ridden this bike before.

These days designer Daniel Simon is hard at work fine-tuning the shape for the Roborace autonomous racecar, but one of his previous two-wheeled is part of Mecum’s auction during Monterey Car Week. Simon’s design for the Lotus-C01 is simply stunning, and this example still has just two miles on the odometer. The company thinks it could sell for $370,000 - $450,000.

The German firm Kodewa technically licensed Lotus' name for these bikes, which the company also did for an LMP1 racecar. However, Simon still imbues the design with Colin Chapman’s axiom to “simplify, then add lightness. There’s nothing extraneous about the C-01’s simple shape, but there are still enough interesting details to keep your eye moving across the body. We especially like the Lotus emblem in the grille.

The C-01 is quite rare with a production run of just 100 units, but Mecum believes this one is even more special as possibly the only example currently in North America. Power comes from a 1,195-cubic-centimeter V-twin from a KTM RC8R superbike. The mill produces 175 horsepower and sends that grunt to the rear wheel through a six-speed gearbox. Simon beautifully incorporates the side-exit exhaust into the fairing near the rear. The powerplant rests in a chromoly trellis frame with a cast aluminum swingarm. It rides on carbon fiber wheels that have a 19-inch diameter in front and are 17-inches in the rear.

Given the combination of rarity and beauty, we're curious to see how much the C-01 sells for in Monterey.

Designed by Daniel Simon, creator of the Tron Legacy Lightcycles and the Bubbleship from the movie Oblivion
Only 100 made
No longer being produced
Believed to be the only one in North America
First year of production
Never ridden
1195cc liquid cooled twin
Approximately 200 HP
6-speed
Steel, titanium and carbon fiber frame

The Lotus C-01 was revealed as a 3D computer mockup in 2013, and the world was stunned by its combination of a radical body shape with the legendary Lotus name, never previously associated with motorcycles. The concept was sketched out by former Bugatti designer Daniel Simon, who is best known in the 2-wheel world for the Tron Legacy Lightcycle. Press and Internet observers were further stunned in 2014 to see the computer model had actually been built in a form very close to the fantasy—a rare occurrence with computer concepts. The original carbon fiber monocoque idea was swapped for a far more practical chromoly trellis tube frame, built by Kalex, which is partly owned by the Holzer Group, who put this Lotus motorcycle project together. The swingarm is an aluminum casting, fully capable of handling all that power, and road tests of the Lotus have been resoundingly positive. It was projected the Lotus C-01 would have 200hp, but the production model uses a 175hp KTM 1195cc V-twin from the RC8R superbike. The chassis is state of the art, with 320mm Brembo racing brakes, twin Ohlins rear suspension, upside-down Sachs forks, and a carbon-fiber shell built of 12 sections. The wheels are carbon-fiber, built by the South African specialists BST, and are bespoke to the Lotus, being 19-inch diameter at the front, and 17-inch at the rear, to suit the original concept’s silhouette. The C-01 follows the computer model so closely that it’s difficult to tell them apart on a screen, but this Lotus motorcycle is very real, and has perfect craftsmanship to complement its 100 percent hypersports specification. This stunning, 2-mile 2014 Lotus C-01 is one of only 100 ever to be built, believed to be the only example in North America of this stunning machine as well as one of the most compelling motorcycles ever built.