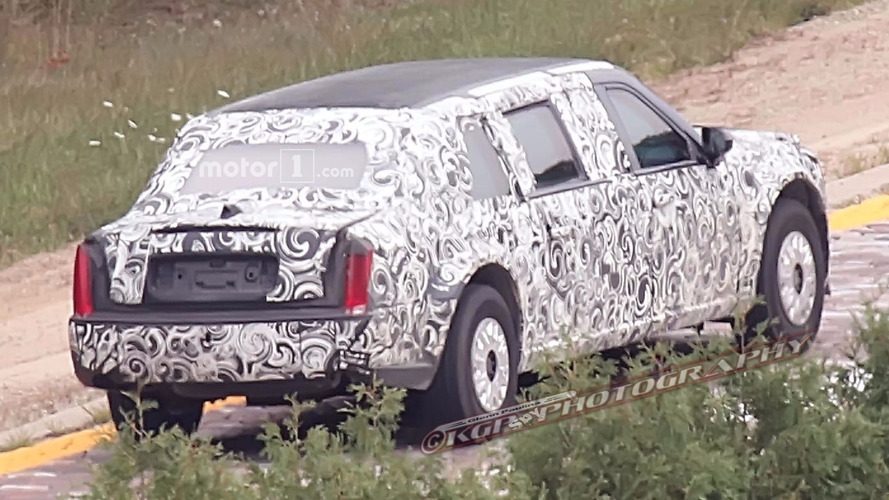 Details around the armored vehicles used to transport the President of the United States are always, perhaps unsurprisingly, few and far between. But our spy shooters stake out the General Motors proving ground in Milford, Michigan, and spotted what appears to be the next version of the heavily armored vehicle testing – just in time for election season.

Though it looks like a Cadillac sedan, the presidential limo – known informally as “The Beast” – is really a hardened, toughened heavy-duty truck platform. The new model spotted testing here is, as with today’s limo, a huge sedan, with extremely high ground clearance and an enormous body. That size is necessary, in part, to accommodate significant levels of armoring and bomb-proof bodywork; the giant truck-like wheels and tires are likely required to support the massive machine’s entire weight.

Compared to the current Beast, this one adopts design cues of newer Cadillac models, with the brand’s vertical running lights and redesigned grille visible. GM last introduced a new presidential limo in 2009 to coincide with the inauguration of President Barack Obama; it was designed to resemble the Cadillac STS and DTS sedans, neither of which is still on sale. Cadillac offered few technical details on the model, saying in a 2009 press release only that, “The car was designed, developed and tested by specialists who adhered to an extensive set of specifications. It was subjected to an extreme testing regimen to ensure performance that achieves precise functional requirements.”

A Secret Service press release issued at the car’s introduction was similarly vague about the capabilities of The Beast: “Although many of the vehicles’ security enhancements cannot be discussed, it is safe to say that this car’s security and coded communications systems make it the most technologically advanced protection vehicle in the world.”

Given the timing of this development mule’s appearance and the fact that a new president will be inaugurated in January 2017, it’s possible we’ll see a new version of The Beast soon. Just don’t expect to see it on offer at your local Cadillac dealership.