McLaren to show 570GT for first time in U.S. 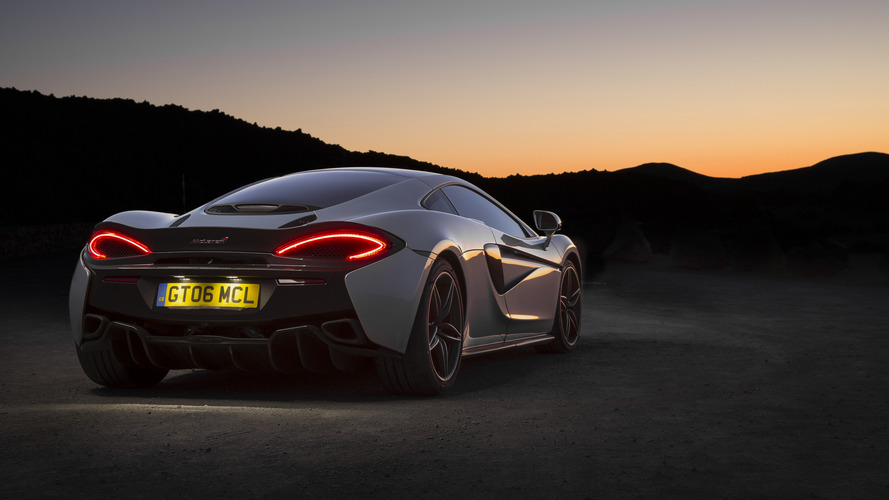 The upcoming Pebble Beach Concours d’Elegance will mark your first opportunity to see the McLaren 570GT and the 570S GT4 on U.S. soil. Both cars will be displayed during the Monterey Car Week festivities in California later this month.

The McLaren 570GT will be on display at the McCall’s Motorworks Revival on Wednesday, August 17. Then it will be available at the McLaren Driver Experience Center based at the Bernardus Lodge in Carmel Valley, California, from Thursday through Saturday; potential customers can take 30-minute test drives in the 570GT and 570S. Finally, the 570GT will bow at the Pebble Beach Concours d’Elegance on Sunday.

The McLaren 570GT is the latest entry in the company’s Sports Series lineup. It’s a more livable, everyday version of the McLaren 570S, with a slightly more comfortable ride, improved cargo capacity, and a glass panoramic roof. That said, there’s still plenty of performance on tap: a mid-mounted 3.8-liter biturbo V8 produces 562 horsepower and can rocket the 570GT to 60 miles per hour in just 3.4 seconds.

The McLaren 570S GT4, meanwhile, goes to the other end of the automotive spectrum. It’s a race-only model with a taller rear wing for improved downforce, a new carbon-fiber front splitter, magnesium-alloy wheels with Pirelli slick tires, and other race-ready upgrades. It will be shown at The Quail, a Motorsports Gathering, in Monterey alongside four classic McLaren Formula 1 cars, starting on Friday, August 19.

Gallery: McLaren to show 570GT for first time in U.S.

McLaren Automotive is returning to the historic Monterey Car Week, starting August 15, 2016, with the U.S. debuts of the McLaren 570GT road car, the 570S GT4 race car and new activations which will showcase McLaren’s strong heritage and current model line-up. This is the seventh year McLaren Automotive will have a significant presence at The Pebble Beach Concours d’Elegance, bringing enthusiasts and owner’s together year-after-year since 2010, when McLaren used the venue to show the concept form of its first modern-era road car.

Over the course of Monterey week, McLaren will introduce the US to the 2017 570GT with several examples of the car to be found around the peninsula. The car will make an appearance at McCall’s Motorworks Revival on Wednesday evening. It will then be on display and doing drives at the McLaren Driver Experience Thursday - Saturday, followed by a presence at the Pebble Beach Concours d’Elegance on Sunday.

The new McLaren 570S GT4 race car will also be displayed for the first time on U.S. soil. The latest McLaren race car, which already has one race win to its name, is currently completing the final development stages in real-world race environments in Europe and is eligible for all GT4 competition globally with customer teams for the 2017 season.  In Monterey, it will be shown alongside a McLaren P1TM GTR and M8F Can Am race car on August 17 at McCall’s Motorworks Revival at the Monterey Jet Center. This trio will also appear August 19 atThe Quail, A Motorsports Gathering, as a result of a partnership with the Petersen Automotive Museum.

Beginning Thursday, August 18, at the Bernardus Lodge in Carmel Valley, McLaren Automotive will host The McLaren Driver Experience, providing 30-minute 570S and 570GT test drives along Laureles Grade Road for prospective owners and enthusiasts*. The Bernardus Lodge will also house an array of iconic heritage race cars, several of which will all have their engines started at various times during The McLaren Brand Experience hosted by Amanda McLaren, daughter of founder Bruce McLaren. The heritage cars include:

At the Pebble Beach Concours d’Elegance on Sunday, August 21, McLaren Special Operations will also reveal a unique project on the concept lawn, the details of which will be announced shortly.