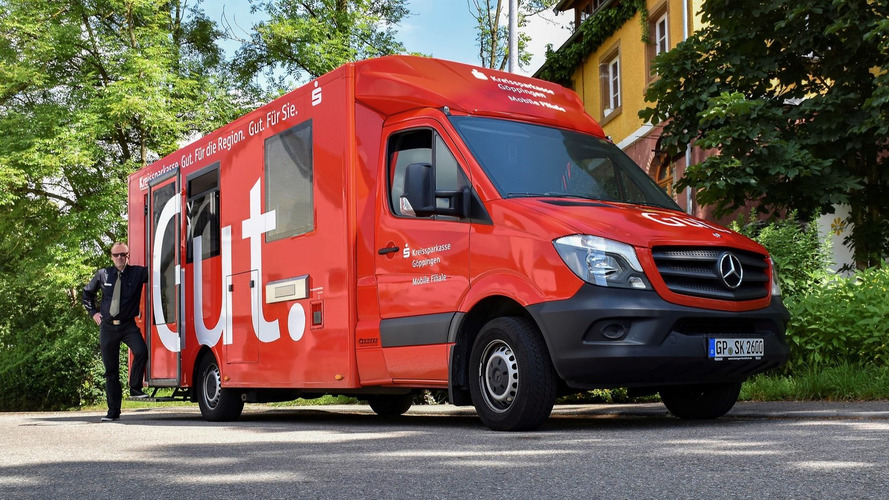 One way to make up for branch closures.

The lack of access to a bank is a real problem in rural areas across the world. But a German bank has a solution in the form of a Mercedes Sprinter-based mobile branch.

It was built for Göppingen Savings Bank on a Sprinter 316CDi chassis, with a four-cylinder diesel engine making 163 horsepower. Which, by all accounts, is plenty to get around its beat in the Swabian Alps region of southern Germany.

Cashier Joachim Beck said: “It’s almost a shame we only ever drive short distances. I have to admit that the way the vehicle handles has really surprised me. Despite the extra weight it has to carry, the engine packs a real punch, even in the lower rev range.”

The body was built by Mercedes-approved firm Berger Fahrzeugbau on a low-line chassis developed for motorhome applications. The floor sits 205 millimeters lower than standard, making access easier and increasing the volume of the body, which is essentially a big box.

A very tough box at that, made from “special high-security materials.” It’s bulletproof, in other words, both the body panels and the glass. It features all the facilities you’d expect of a bank, enabled by a satellite data link. It holds an unspecified amount of cash in a secure room accessed from the cab through an alarmed door, and is equipped with CCTV and a GPS tracker. So it’s not quite as vulnerable as it might appear.

The interior looks just like any other bank, and it even has a washroom.

Incidentally, British bank Nat West has been running mobile branches based on Ford Transit chassis for a number of years now.