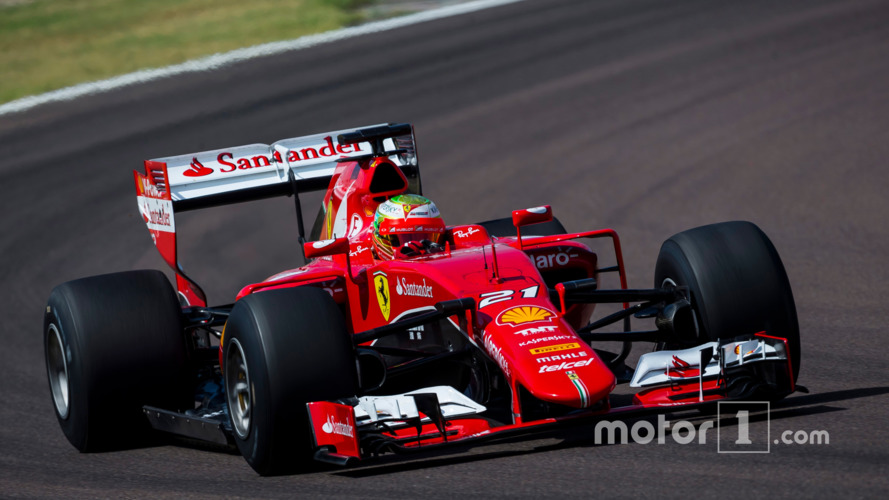 As the top three F1 teams begin Pirelli's 2017 testing programme, Matt Somerfield looks at how they are achieving the 2017 downforce levels with modified 2015 cars.

Pirelli’s preparations for the 2017 regulation changes are being assisted by Mercedes, Red Bull and Ferrari, as all three provide mule cars to simulate 2017 levels of downforce, whilst improving the suspension to cope with additional loads that the larger, heavier wheels and tyres will transfer into the chassis.

Pirelli have arranged 10 tests, over 22 days, during 2016 to identify any weaknesses in their design, giving them ample time to respond before the 2017 season gets underway.

The tests involve both wet and dry weather conditions with sprinklers being used for the wet weather testing days to simulate the relevant conditions they'd like to study.

The 2017 specification tyres are 60mm wider at the front, up from 245mm to 305mm, whilst the rear tyres are 80mm wider, up from 325mm to 405mm, the intention of which is to provide the drivers with a different offset between mechanical and aerodynamic grip, hopefully changing how the cars behave on circuit and improving the racing.

On top of this, Pirelli have already stated that their 2017 range of tyres will suffer much less degradation and have a much wider operating window, allowing the drivers to push them much harder throughout each stint.

FIA, Pirelli and the teams collaboration

The cars being provided by Mercedes, Red Bull and Ferrari are all 2015 specification machines, that have been modified to accept the wider wheels and tyres and hopefully simulate downforce to levels like those that should be possible in 2017.

As each car has its own philosophy there is no cookie cutter solution to achieving this goal, with a technical directive, seen by Motorsport.com, a target downforce level has been set relative to the level of the cars used at Melbourne in 2015.

Most of the changes made to simulate 2017 levels of downforce centre around the diffuser, owing to the increased volume that will be available to the teams in 2017.

Lest we forget that the diffuser will not only be 50mm taller, up from 125mm from the reference plane to 175mm, but it is also possible to start its inclination 175mm forward of the rear wheel centre line (2016 diffuser volume highlighted in purple, 2017 in green).

The technical directive specifies ways in which skirts can be used on the side of the floor to improve ground effect, how a non-flat floor can be used to create venturi tunnels, and how the diffuser can be modified with extended footplates in order to inhibit tyre squirt, which would curtail the performance of the diffuser as the tyre deforms under load.

The diffuser strakes, end boxes' angles and heights may also be changed, even extending them beyond the regulation boxes, along with the height of any gurney trims that are attached to the diffuser's periphery.

The bargeboards can be increased in height and the splitter can be run higher to infer a greater rake level, just as the 2017 regulations permit.

The 2017 front wing will be 150mm wider than the ones used since 2014 in order to marry with the increased track of the car and wider front tyre.

However, the technical directive specifies that only 2015 or 2016 specification wings be used, although they can be repositioned to change how air moves around the car.

Flaps and/or gurneys can be added to the 'neutral' central section in order to impart a different aerodynamic effect downstream.

The rear wing is pretty unrestricted, allowing any number and geometry of winged elements between 300mm and 950mm above the reference plane, which allows the engineers ways in which to connect the airflow structures with the increased diffuser volume below.

The Ferrari and Red Bull mule cars being used for the test have broken cover over the last few days and both have come up with similar but different ways in which to simulate the 2017 levels of downforce.

Ferrari were the first to test the 2017 specification tyres at Fiorano and adapted their 2015 challenger, the SF15-T, with Sebastian Vettel and Esteban Gutierrez putting the car and tyres through their paces in run plans designed by Pirelli to better understand their rubber.

The front wing has had a section added behind the 'neutral' section in order to infer a different flow structure from the nose above.

The bargeboards, which will be much larger in 2017, were untouched by the Scuderia as they were clearly concerned with destabilising the cars intended centre of pressure.

However, a skirt was added to the side of the floor, blocking off a proportion of the floor, constricting airflow and heading some way toward the type of ground effect you'd associate with Colin Chapman's Lotus cars that ran skirts in 70's.

At the rear of the car, the team ran a faux 2017-specification rear wing, which featured the vertically curved and shorter endplates and wider flapped section that will be used in 2017 but fell short of the deltoid shaping that will feature up and down the 2017 cars.

The rear wing will only be 800mm tall rather than 950mm but is 950mm wide, rather than 750mm in the flapped region in 2017. A beam wing was used by Ferrari to improve rigidity and provide aerodynamic assistance too, although this won't be possible in 2017.

Like Ferrari, the changes made to Red Bull's mule car centered around adding downforce at the rear of the car, with the front wing identical to the one used in 2015.

However, Red Bull decided to close off much more of the floor, with a skirt running the full length of the floor, to the splitter section, to generate the level of downforce that can be expected from the enlarged diffuser in 2017.

The RB11 features the current specification rear wing in terms of both width and height, but has a beam wing that intersects with a monkey seat, as the team looks to establish an aerodynamic connection between the diffuser and rear wing.

The diffuser's gurney trim has also been extruded upward significantly as Red Bull looks to utilise the flow structures generated by the floor to improve the diffusers performance.

Mercedes will provide a test mule of their own, which will have its first run at Barcelona in September.

The W06 they'll use will likely be outfitted in a similar fashion to the Ferrari and Red Bull we've already seen but will provide Pirelli with some much needed relative data in terms of power unit performance too.

The three constructors helping Pirelli will operate the cars, but it is Pirelli that designate the run plans, providing the mechanics with undisclosed compounds in what is being deemed a blind test.

All of the information pertaining to work conducted by the teams in CFD, the wind tunnel is recorded in a run-log and made available to the FIA in order to keep the teams honest in their application of testing time.

Meanwhile, each participating team will provide an end-of-test report that is distributed to all of the teams, Pirelli and the FIA. The report includes information on aero balance, mechanical balance and weight distribution deltas comparing the 2017 mule with known baselines. Drivers' comments will also be recorded and non-participating teams can send an observer.

Pirelli will provide information about their findings too, including lap and sector times, wear profiles, measured grip and cornering stiffness per axle, measured carcass temperature correlated with running pressure and their delta to the starting value and vertical stiffness to name but a few.

The participating teams cannot run any sensors in order to extract additional information in relation to aerodynamic performance but Pirelli have requested the use of wireless tyre pressure monitors, front tyre infrared temperature sensors (like those we see mounted on the front wing during a race), rear tyre 8-channel infrared temperature sensors, infrared cameras, hub height laser sensors and speed over ground optical sensors.

All of these are used to garner information in relation to the tyre and to correlate it with known quantities from the current tyre offering.

Whilst every effort is being made to relay information to all of the teams in regards to the test days, it goes without saying that time on track is always beneficial and some high ranking personnel from other teams have voiced their concerns on how much of an advantage the participating teams might get.

It's a catch 22 though as Pirelli have come in for a lot of criticism over the years of their tyre supply tenure, something that hasn't always been able to be directly apportioned to the quality of their product. Asking them to supply an all new tyre size without testing would have been a bridge too far and was actually part of the new contract they signed.

Whilst it may seem unfair, other teams were offered the opportunity to create mule cars and declined, either through lack of resources to run the programme or financial constraints - something the participating three have shouldered for the betterment of the sport.

Here's an overview of the changes that are being made in 2017. They will most certainly have a visual impact on the sport, as the cars take a dramatic change in shape.