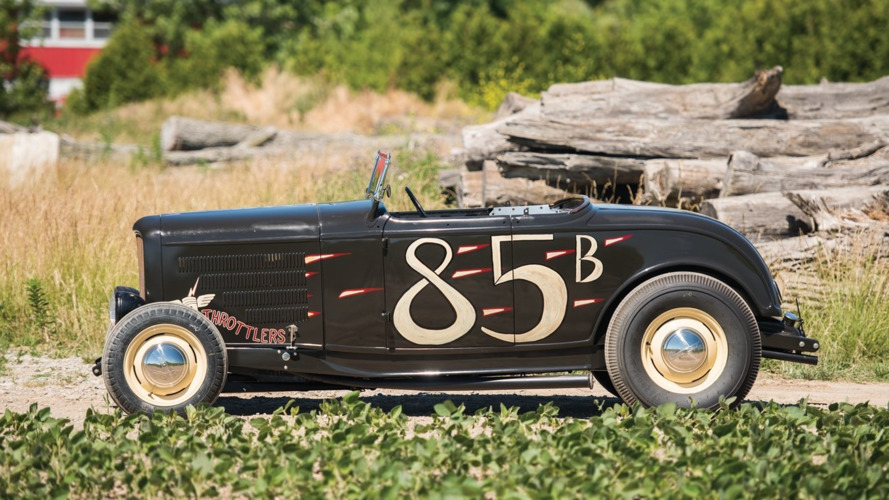 When young servicemen returned home after WWII, they bought up affordable pre-owned cars like the 1932 Ford “Deuce.” The replacement for the Ford Model A had been a runaway hit when it debuted, and had maintained its popularity thanks to its reliability. With dirt track and dry lake bed racing becoming increasingly popular throughout the late ’40s and into the ’50s, G.I.s who had picked up mechanical skills during the war turned their attention to hot rodding.

In addition to the simplicity of the ’32 Ford, the thing that made the Deuce so special was its new flathead V8 engine. It was the first time a V8 had been put in a mass-produced car that was even remotely affordable for the average buyer. And that led to plenty of modifications, and some of the first examples of the modern hot rod we know and love today.

This beautiful 1932 Ford “Hi-Boy” roadster is a perfect example of that, and it’s headed to auction at RM Sotheby’s in Monterey, California, later this month.

Built by the father and son team at Longley Restorations in Florida, this Deuce is one killer tribute to the simple days of hot-rodding. The concept for the build was that of automotive guru Jack Boxstrom, and his instructions were to build a car based off of the following: “a 20-year-old ex-service man buys a used ’32 Roadster in 1947, removes all the unnecessary parts, hops up the motor, and goes racing.” With a wealth of knowledge of the era, and a knack for finding just the right parts, the Longleys got to work.

From the ammunition case floor boards off the USS Hornet, to the “big ‘n little” wheel combination with 1946 hub caps all around, this rolling homage to hot-rodding’s early days is dialed in. The swirling marble style shift knob, the standard 1932 Ford paint with custom “Lakes graphics” and faux patina, bomber alloy seats, it all stays period correct.

There’s no wanting for power either, this example is gifted 120 horses from the 239 cu-in flathead V8, and you can bet you’ll enjoy using each and every one of them when you drop the hammer. Dual Stromberg 97 carbs, a Weiland intake, Eldebrock script finned aluminum heads make peeking under the hood an eye popping experience, while a “Lakes pipes” custom exhaust takes care of making your ears happy.

A three-speed Ford manual transmission, torque-tube drive to a Halibrand quick-change rear-end, Vega-style steering box do their part by making sure you feel everything the car is doing. The four-inch drop front axle, front and rear Model A cross members, reverse-eye springs, four-tube shocks, and hydraulic Ford front drum brakes are there to assist with the task. But other than the brakes, I’d imagine you’d be hard pressed to say what part stands out in their efforts.

Ford got it right with the Deuce, and the Longleys got it right with this build, which makes this car a perfect example of rodding done right. These simpler machines, free of garish amounts of chrome and Jolly Rancher-esque lacquers, have seen a big resurgence of late, and I for one couldn’t be happier.