China's traffic-straddling bus is now a real thing, and it's huge 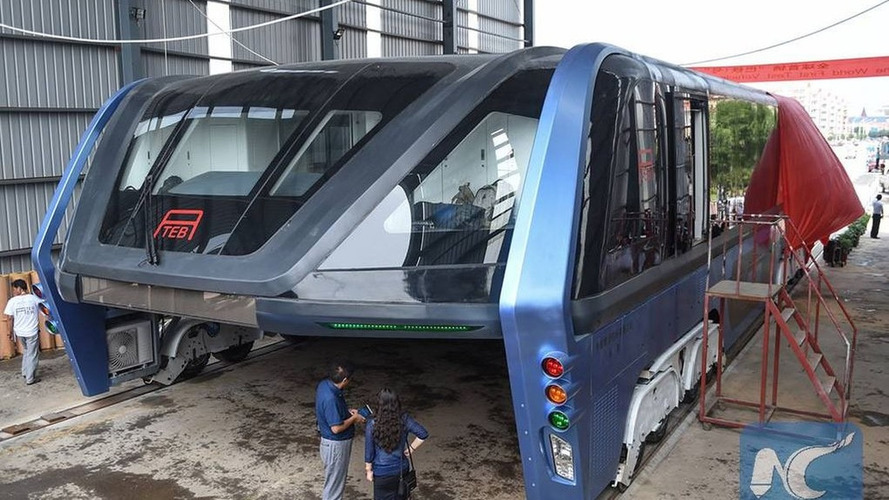 It's like an enormous Pac-Man eating cars, instead of pac-dots.

Remember the Transit Elevated Bus (TEB-1) from a few weeks ago? Well, it’s actually real. It took its very first test run on Tuesday in the northeastern city of Qinhuangdao, in the Hebei province in China. Developed by a local company as an attempt to try and solve traffic problems, the so-called ‘straddling bus’ is simply gargantuan, measuring 60 meters (197 feet) long, 7.8 meters (25.5 feet) wide, and 4.8 meters (15.7 feet) tall.

It’s not actually a bus per se taking into account it runs on tracks installed on both sides of the street and grabs the necessary power from the nearby utility poles. There are approximately 2.1 meters (7 feet) of space underneath it for vehicles to travel through, while the TEB-1’s massive interior has enough room for as much as 300 people.

According to Song Youzhou, the designer of the bus, work is well underway at several new prototypes.  TEB Technology Development Company in charge of building these monstrosities has already signed contracts with five other cities in China to run pilot projects.

It remains to be seen whether the TEB-1 will indeed prove to be an effective way to partially solve the country’s issues with traffic. We can only imagine driving underneath the ‘straddling bus’ is probably a very weird experience, like travelling within a moving tunnel.

Gallery: China's traffic-straddling bus is now a real thing, and it's huge