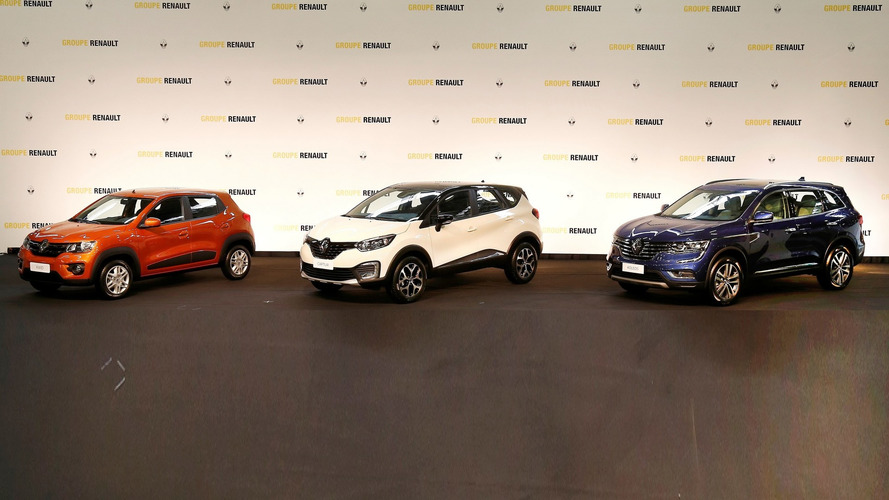 The three high-riding models will join the already available Duster.

Renault CEO Carlos Ghosn has announced the company’s SUV offerings in Brazil will be expanded in the near future by the addition of three members: Kwid, Captur, and Koleos. The new arrivals will join the already available Duster set to receive a new generation at some point in 2017 when it will likely grow to make room for a seven-seat version.

During a visit at Renault Ayrton Senna manufacturing facilities in Brazil, Ghosn revealed plans to produce the Captur in São José dos Pinhais starting with the first half of next year. It will share the assembly line with other locally-built products such as the Sandero, Sandero Stepway, Duster and its pickup equivalent, the Duster Oroch.

As for the tiny Kwid, it will be imported from Renault’s factory in Chennai, India starting next year. At the other end of the SUV spectrum we find the all-new, second-generation Koleos which will arrive in Brazil also next year. This one too will also be imported, either from the Wuhan factory in China or the Busan plant in South Korea.

The top brass at Renault went on to specify the company’s investments in Brazil are being made as planned, even though the current economic environment in the country is not great. The company with the diamond logo completed its initial R$ 1.5 billion investment for the 2010-2015 period ahead of schedule and is now focusing on the second part of the investment amounting to R$ 500 million for the 2014-2019 cycle.

August 2 – São José dos Pinhais, Brazil , Carlos Ghosn announced that Renault Brazil will extend its lineup of SUVs with the Kwid, Captur and New Koleos joining the bestselling Renault Duster. He also outlined plans for the company’s future in the country during a visit of the Renault Ayrton Senna manufacturing complex in Brazil.

“With this new product plan, we expect to capture a significant percentage of the fast-growing SUV segment in Brazil,” said Renault CEO Carlos Ghosn. “With three of our SUV models to be produced in Brazil, our confidence in this market is further confirmed.”

Ghosn also announced that the Renault Captur will be produced in São José dos Pinhais on the same line that currently assembles the Renault Duster, Sandero, Logan, Duster Oroch and Sandero Stepway. The launch of the Renault Captur in the popular, fast-growing C-SUV segment will contribute to Renault’s growth in Brazil.

The Renault Kwid will make its debut in 2017 together with the top-of-the-range New Koleos that will be imported. The Renault Captur will be available during the first half of 2017.

Ghosn also confirmed that all investments announced for the country have been maintained despite the current economic environment. The first investment cycle of R$ 1.5 BLN for the 2010-2015 period was completed ahead of schedule. The second R$ 500 MLN investment for the 2014-2019 cycle is in process as planned.