LaFerrari Aperta photographed without its top 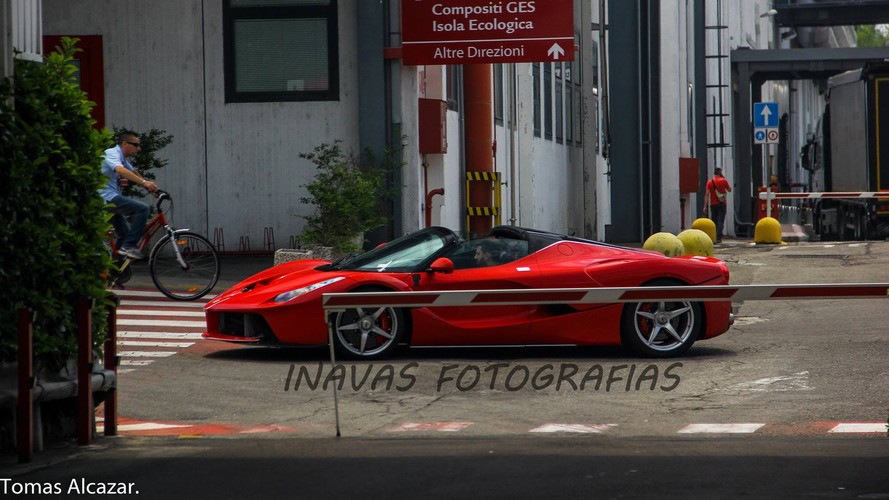 The open-top LaFerrari has been spotted and it looks as spectacular as you would expect.

Even if you have the means to buy it, you just can’t. The LaFerrari Aperta has already reached sold-out status even though the model has not received so far a proper public debut. That will happen at the beginning of October during the Paris Motor Show when Ferrari will announce the number of units it plans to make for those lucky enough to claim one.

With the coupe being a stunner, it comes as no surprise the convertible version is also a sight to behold and the attached image of the Aperta comes to confirm it. Ferrari has created not only a detachable fabric roof for its latest open-air prancing horse, but also a removable hard top manufactured from carbon fiber. This car caught right in the heart of Ferrari was photographed without a roof in place and with an all-red look whereas the one from the official pics had a black finish with red accents.

Even without a roof, the Aperta will have the exact same aerodynamics as its coupe counterpart thanks to a series of body tweaks. In addition, the new model will retain the same torsional rigidity and beam stiffness as its fixed roof sibling and it will be able to match its performances. That means it will run to 62 mph (100 kph) in less than three seconds and will do more than 217 mph (350 kph).

There's no word about the price, but most likely the Aperta was a lot more expensive than the coupe which carried a starting price of $1.35 million. Ferrari made 499 coupes and chances are there will be fewer convertibles, so the exclusivity was probably reflected in the Aperta's price.