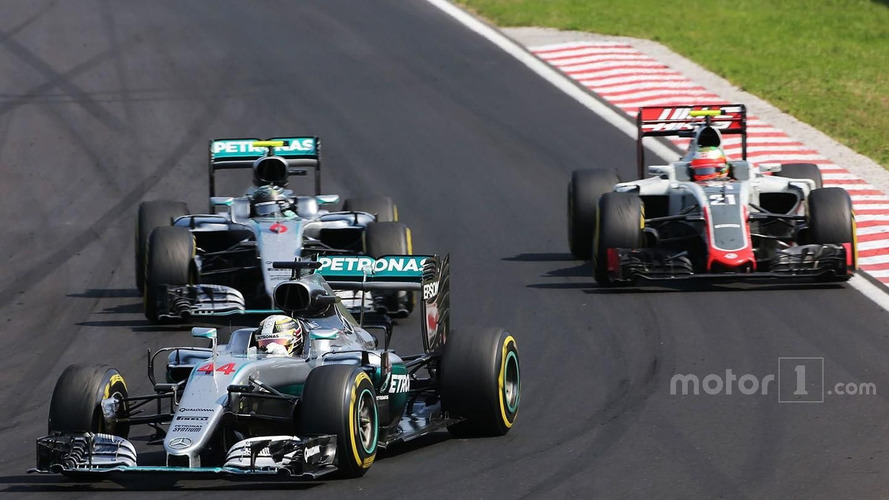 Haas F1 driver Esteban Gutierrez has called on Lewis Hamilton to "respect all of the competitors" after the Briton made a gesture towards him during the Hungarian GP.

Race winner Hamilton was stuck behind Gutierrez for much of lap 52, before finally putting the Mexican a lap down on the main straight - as his advantage over second-placed Nico Rosberg shrunk from 1.7s to 0.6s.

Hamilton went on to win the race regardless, while Gutierrez took the chequered flag in 12th and was subsequently demoted one place due to a five-second penalty for ignoring blue flags.

Asked about the blue flags after the race, Gutierrez said: "I didn't ignore them.

"I simply had two airplanes coming from behind, coming very quickly - so, of course, I was focused on my race and they came very quickly, and I was trying to find the safest place to let him [Hamilton] by."

Subsequent replays from Hamilton's onboard appeared to show the three-time champion raising his middle finger to Gutierrez while passing him on the main straight - and while the Mexican said he did not see the gesture, he was unhappy to hear about it.

"Not a very respectful move from him, I have to say. I've spoken to him in the past - he's the world champion but he shouldn't do these kinds of things, he should respect all of the competitors.

"You never know, maybe in the future I will be fighting [for] the championship with him so he has to respect that."

Haas team boss Gunther Steiner defended his driver, suggesting that Hamilton's gesture was what contributed to the stewards' penalising him.

"I don't know what he [Hamilton] was annoyed about because he [Gutierrez] didn't keep him back this long," Steiner said.

"It's one thing Esteban got penalised with five seconds - and we still need to check the data and the timing - but I think the five seconds were taken because the gesture was done, not because he was holding him up.

"Every racing driver is the same, they want to go - and Esteban cannot go up in fresh air, he cannot jump.

"It's a little bit give and take, I think Lewis didn't change his result in the hold-up. Was it needed? Maybe not. But it happened. For me, the five seconds were given because of the gesture."

For his part, Hamilton conceded that the Hungaroring was a difficult track to let quicker drivers past at - but insisted Gutierrez simply broke the rules.

"This is a hard track to really get out of the way, there's lots of marbles off-line," Hamilton said.

"It wasn't good today in terms of getting through traffic. Some of the drivers were lifting at the most awkward positions, where if you went into the corner too quick you might collide. It was definitely difficult to navigate through them today.

"The one with the Gutierrez - he just didn't abide by the flags that I could see were being waved at him. I lost so much time behind him, and at the same time Nico was catching me, which was really, really tough. Fortunately I eventually got by him down the straight."