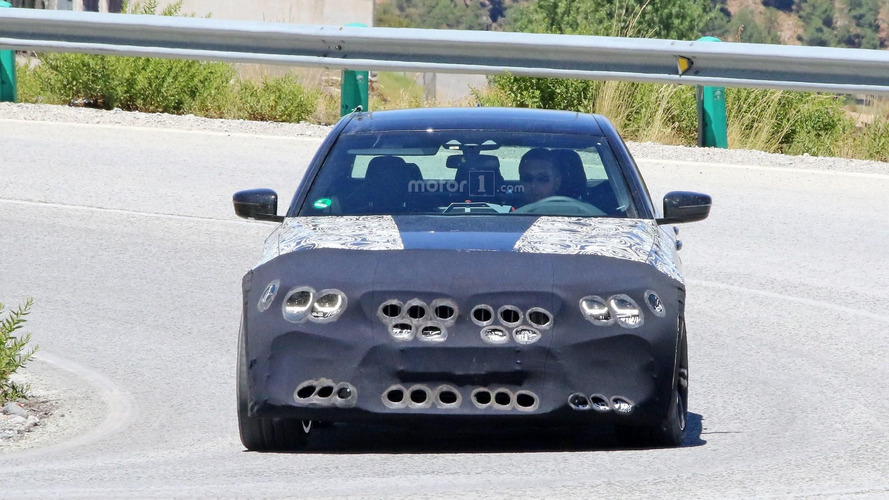 The prototype's weird front fascia disguise seems to be masking a pair of beefier intakes.

Caught on camera in southern Spain, the next-gen BMW M5 had a more aggressive front with larger air intakes likely providing additional cooling for what will probably be an uprated engine. The high-performance midsize sedan is expected to retain the biturbo 4.4-liter V8 engine from the current model, but the engineers are likely upgrading the unit to deliver more than the 600 horsepower (441 kilowatts) available in the recently introduced M5 Competition Edition. Some are saying the engine’s output will rise to 626 hp (467 kW), but only time will tell if this is true.

The aforementioned limited-run model sprints to 62 mph (100 kph) in 3.9 seconds, so expect the next M5 to complete the task a few ticks of a second quicker thanks not only to an uprated engine, but also due to a lower curb weight. Although the prototype spotted here appears to have an evolutionary design, underneath the familiar skin will be a significantly different car, one that will ride on BMW’s CLAR platform implemented in the flagship 7-Series. Sources close to the German marque are indicating the switch to the new architecture will shave off as much as 220 pounds (100 kilograms). Even if that won’t be the case, we are still expecting a significant diet from the new 5 Series and its M5 counterpart as well.

It is believed that for the first time in the M5’s existence, the car will be available with an optional xDrive layout. As a matter of fact, there are some people saying the U.S. version of the car will come in an xDrive-only flavor whereas European buyers will get to pick from both. The AWD layout will be rear-biased, so it will only send the engine’s power to the front wheels when the extra traction is going to be necessary.

A recent report indicates the standard 5 Series will receive its world premiere in January next year at the North American International Auto Show in Detroit. If that’s correct, it means the M5 will not arrive sooner than the end of 2017 or the first half of 2018.