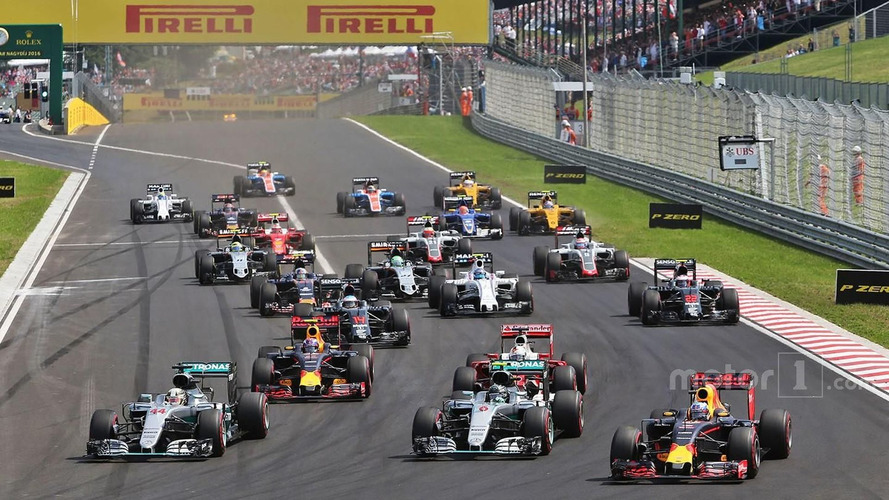 The winner of the race was basically decided in the first corner.

Lewis Hamilton moved into the championship lead for the first time this season after taking a commanding victory in the Hungarian Grand Prix.

The Briton, starting from second on the grid, basically won the race at the first corner, when he overtook teammate Nico Rosberg, who made a worse start.

Despite Rosberg staying in contact all race long, Hamilton never looked troubled and took his fifth win in six races to move into first place in the standings, seven points ahead of Rosberg.

It was Hamilton's fifth race in the Hungaroring, making him the winningest driver at the circuit.

Daniel Ricciardo finished a distant third as Red Bull did not prove to be a match for Mercedes in race trim, the Australian holding on the a podium slot despite intense pressure from Sebastian Vettel at the end of the race.

The Ferrari was fourth, ahead of Max Verstappen, whose chances of a stronger results vanished after being stuck behind Kimi Raikkonen early in the race.

Raikkonen finished in sixth as the tables turned and it was him who was unable to pass the Red Bull driver.

Fernando Alonso completed his best weekend of the year, crossing the line in seventh position, albeit a lap down.

The Spaniard beat compatriot Carlos Sainz, who had to settle for eighth in the Toro Rosso, ahead of Valtteri Bottas (Williams) and Force India's Nico Hulkenberg.

Alonso's teammate Jenson Button was the only retirement of the race.

Story of the race

Hamilton made a better start than his teammate and took the lead after diving down the inside of Turn 1 as Rosberg had to defend from the attacks from Ricciardo, who took second place briefly before being passed by the German at Turn 2.

Verstappen also made a better start than the Mercedes, but Hamilton shut the door and the Dutchman stayed in fourth.

Hamilton opened a 1.5-second lead on the opening stages as, further behind, Jenson Button hit trouble, reporting "the pedal is going to the floor".

The McLaren driver was asked to stay out, but soon pitted and was put under investigation for illegal radio messages. He was handed a drive-through penalty moments later.

By lap 10, Hamilton held a 1.8s lead of Rosberg, with the Red Bulls nearly five seconds adrift as Verstappen complained he was "driving like a grandma" behind teammate Ricciardo.

Hamilton started to push harder as the first pitstops approach, the leader opening his gap to 2.5 seconds by lap 15.

Vettel was the first of the leaders to pit on that lap, with Ricciardo stopping a lap later, both men switching to the soft tyres.

Hamilton and Verstappen pitted for softs on lap 17, the Dutchman rejoining behind Vettel and Raikkonen as Ferrari's undercut paid off. The Finn was yet to pit and Verstappen lost a lot of valuable time behind him.

Rosberg stopped a lap later and returned behind Hamilton once.

Although Rosberg closed in over the following laps, Hamilton appeared very much in control, but his pace allowed Ricciardo to reduce his seven-second gap to just over five.

Hamilton reported graining on his left front tyre after Mercedes asked him to try to up his pace.

Meanwhile, Verstappen lost all his chances of challenging Mercedes as he was unable to pass Raikkonen - who pitted on lap 30 - losing over 10 seconds to teammate Ricciardo.

On lap 34, Ricciardo pitted for softs for the second time as he tried to undercut Rosberg, while Hamilton was asked again to increase his pace in order to avoid the Australian from passing his teammate.

"I'm doing all I can with these tyres," said Hamilton before setting his quickest lap until that point.

Ricciardo started flying as the Mercedes duo stayed on track, as pitting would have meant rejoining the race behind Verstappen.

Mercedes' life was made easier when the Dutchman pitted on lap 39 for another set of softs.

Hamilton and Vettel made their second pitstops on lap 42, both staying on softs.

Rosberg pitted on the following lap and returned clearly ahead of Ricciardo but over four seconds behind Hamilton, who again lowered his pace and controlled the race as his teammate closed in.

Raikkonen pitted from fifth on lap 50, the Finn dropping to sixth behind Verstappen, but with new supersoft tyres.

An angry Hamilton lost time behind Esteban Gutierrez, an opportunity Rosberg used to close right in on lap 2. The Mexican was penalised for ignoring blue flags moments later.

But Hamilton picked up the pace right away and immediately got more air between him and his teammate.

Meanwhile, Raikkonen was the quickest man on track and needed just a couple of laps to catch Verstappen, who was on used soft tyres.

The Finn tried to pass the Red Bull driver on Turn 2 on lap 57, but Verstappen moved to the right as Raikkonen tried to dive down the inside and the Ferraridriver ended up making contact and damaging his front wing.

Raikkonen, who accused Verstappen of changing direction twice, managed to continue chasing the Dutchman despite the damage.

With eight laps to go, Rosberg closed in again on Hamilton again, the German just half a second behind the Briton, who lost time after running wide.

But once more, the wold champion showed he had everything under control and opened up the gap over the following laps.

Behind them, Vettel caught Ricciardo with four laps left as the Australian struggled with older tyres than his rival. Despite running right behind him, Vettel was unable to pass him and settled for fourth.