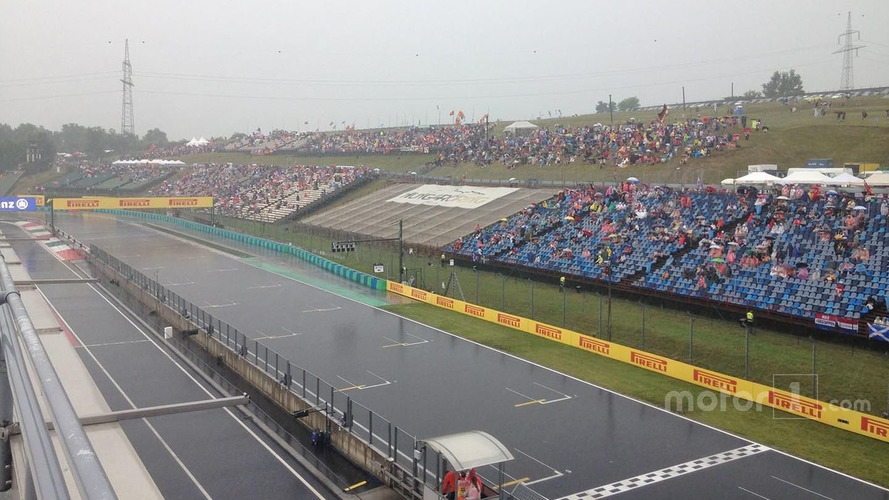 Rain played an important role in today's qualifying session. Here are the results.

Nico Rosberg grabbed pole position for the Hungarian Grand Prix in a chaotic qualifying session that was delayed by rain and interrupted by red flags.

The championship leader's best of 1:19.965 meant he beat Lewis Hamilton by 0.143s in the dying seconds of the session, but only after the Briton had to abort his lap.

Hamilton looked set to go much faster than on his previous best, but found Fernando Alonso spun on track after the Spaniard lost control of his McLaren.

Replays, however, showed yellow flags were displayed as Rosberg completed his flying lap and it remains to be seen if his lap will be investigated.

Sebastian Vettel had to settle for fifth position in the Ferrari, ahead of Carlos Sainz's Toro Rosso and Alonso.

After a 20-minute delay because of heavy rain, Q1 was interrupted by four red flags due to poor weather and crashes, lasting nearly an hour instead of the usual 18 minutes.

All the drivers started Q2 on intermediate tyres, despite the track drying up quickly as the sun finally started to shine.

With some seven minutes left, Bottas was the first driver to venture out on slicks, the Finn putting a set of supersofts, even though some areas of the circuit were still very wet.

Bottas' pace convinced the rest of the drivers that slicks were the way to go and everybody switched to the supersofts with less than five minutes left on the clock.

A frantic final minutes finished with Hamilton in 10th position, on the verge of elimination.

However, it was Romain Grosjean who was knocked out and will start 11th in the Haas, ahead of Daniil Kvyat and Sergio Perez.

There was massive disappointment for Kimi Raikkonen, who finished down in 14th in the second Ferrari.

Esteban Gutierrez and Felipe Nasr will line up 15th and 16th on the grid.

The start of the session was delayed by 20 minutes, but once the pitlane was opened all drivers jumped onto the track on full wets, as more heavy rain was expected to hit the circuit.

And indeed, it only took five minutes for the session to be red-flagged as another downpour arrived right after all drivers had managed to set a time.

Both Hamilton and Rosberg were in the drop zone when the session was stopped.

The action resumed after some 15 minutes, with 13m08s left on the clock.

But as the sun started to shine, Q1 was stopped once again after Marcus Ericsson crashed with nine minutes remaining.

The Sauber driver lost the rear of his car under acceleration at Turn 8 and ended up crashing against the barriers. The Swede was unscathed, but he was out of the session as the right side of his car was heavily damaged.

After a stoppage of over 10 minutes, the action continued once more, with most drivers going out on full wets. The Red Bulls and the Ferraris, however, opted for intermediates.

However, they didn't have time to complete a lap, as Felipe Massa brought out the red flags once again after crashing his Williams.

The Brazilian, on intermediate tyres, lost the rear of his car as he accelerated out of Turn 5, crashing against the barriers and causing another stoppage with 5m20s left.

At the final restart, all drivers except Kevin Magnussen went out with intermediates, the Dane on full wets for a brief moment before returning to the pits to switch to inters.

But with 1m18s left, Pascal Wehrlein triggered the fourth red flag of the day after crashing hard at Turn 10. The Manor driver emerged uninjured from his heavily-damaged car, but the session was not restarted.

That meant Jolyon Palmer, Magnussen, Ericsson, Wehrlein and Rio Haryanto were knocked out in a Q1 segment that lasted nearly a full hour.