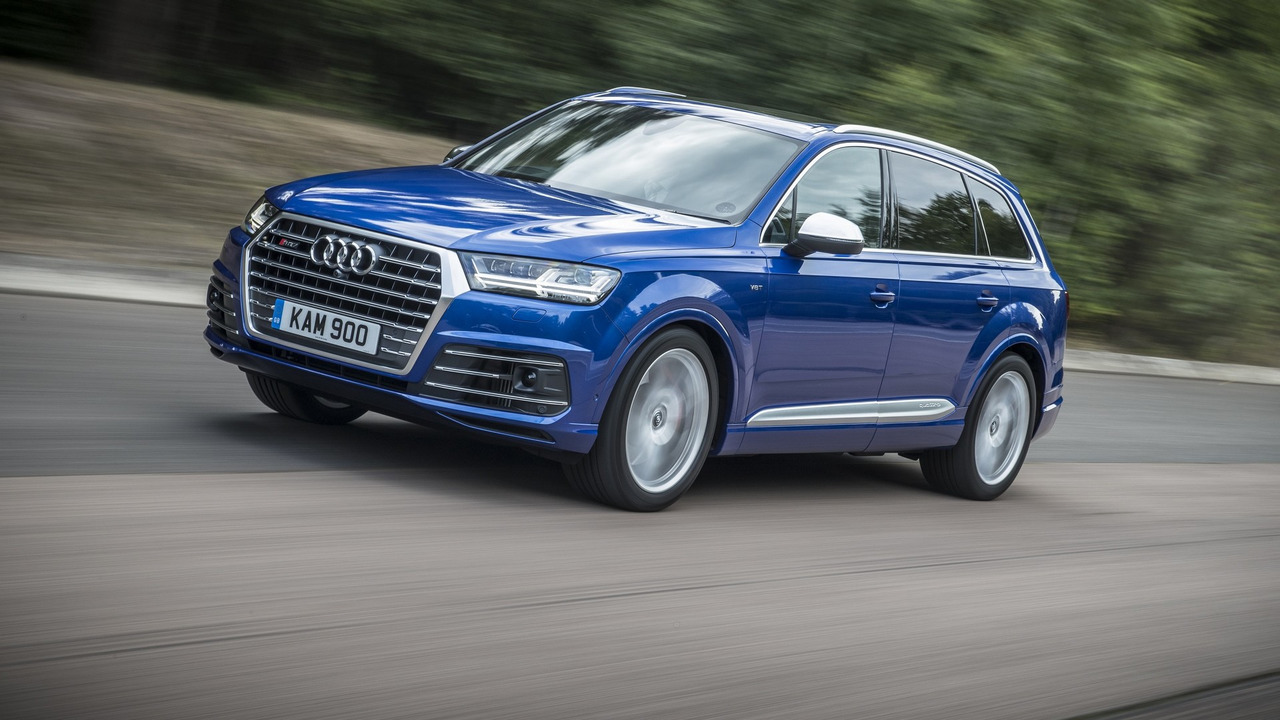 With 900 newton meters of torque on tap, Audi UK is asking almost 80 pounds for each Nm.

It might not be able match the power figures of the monster 6.0-liter V12 TDI from the first-gen Q7, but the 4.0-liter V8 TDI in the SQ7 is better in just about every way. For starters, it grants superior performances, catapulting the high-performance SUV to 62 mph (100 kph) in 4.9 seconds compared to the 5.5 seconds needed by the old one which had four extra cylinders.

It’s more economical, too. Audi UK mentions the SQ7 will return 39.2 mpg UK in the New European Driving Cycle (NEDC) whereas the thirsty V12 was rated at only 25 mpg. To be fair, it’s not just because of the more efficient engine since the SQ7 is 672 pounds (305 kilograms) lighter.

Audi UK is now taking orders for the SQ7 and is asking £70,970 OTR for the base version and mentions deliveries will begin next month. On its home turf in Germany, the diesel beast will set you back €89,900. We are still waiting to hear about whether the United States will get it, but Audi USA spokesman Mark Dahncke told Autoblog: "the SQ7 is not officially signed off on for the US, but we are optimistic."

The highlight of Audi’s new demonic diesel is an electric powered compressor for the V8 engine which generates a massive 435 horsepower (320 kilowatts) and 663.8 pound-feet (900 newton-meters) of torque. If you’re still not impressed by these numbers, it is important to mention that you get the entire torque from only 1,000 rpm, so you won’t have to worry about turbo lag.

At an additional cost, the SQ7 can be configured with carbon ceramic brakes, 22-inch diamond-cut wheels, matrix LED headlights, and all-wheel steering, making it an even more compelling offer for those in the market to get the world’s most powerful diesel SUV on sale.

Technological trendsetter can now be configured on audi.co.uk and ordered in UK Audi Centres nationwide

Another pioneer joins the UK Audi range this week – the new SQ7 TDI, priced from £70,970 OTR, is notable not only as the first ever ‘S’ version of the Q7 luxury SUV, but also as the first series production car to incorporate new electric powered compressor (EPC) technology that consigns ‘turbo lag’ to history. Supporting two sequentially activated turbochargers, the EPC helps to generate pulling power that is unparalleled in this class, and the V8 TDI-powered Q7 flagship is able to deftly deploy it thanks to a chassis bolstered by state-of-the art electromechanical active roll stabilisation. The integration of both systems is made possible by a powerful new 48-volt electrical subsystem which makes its Audi debut in the Q7 and will be the springboard for numerous revolutionary new technologies in the Audi models of the near future.

As it is electrically driven and therefore not dependent upon exhaust flow like conventional turbochargers, the revolutionary electric powered compressor (EPC) brings its force to bear on the 4.0-litre, eight-cylinder TDI in less than 250 milliseconds, so its benefit is palpable from the second the accelerator pedal is depressed.

Now developing 435 PS and 900 Nm (663.8 lbft) of torque, the redesigned V8 BiTDI firmly stakes this performance flagship’s claim as the most powerful diesel SUV on the market. With the electric powered compressor (EPC) supporting the work of the two turbochargers, especially at lower revs, step-off performance is exceptional, and this is reflected in a 0-62mph sprint time of just 4.9 seconds. Top speed is limited to 155mph, and in the New European Driving Cycle (NEDC), the SQ7 TDI returns up to 39.2 mpg combined. This corresponds to CO2 emissions of 190 g/km.

The exhaust, which each cylinder discharges from both exhaust valves, flows through separate channels within a dual-flow manifold system. Each exhaust valve supplies one of the two sequentially activated turbochargers. The Audi valvelift system (AVS), which makes its debut in a TDI engine in the SQ7 TDI, keeps one valve closed at low and intermediate load and rpm so that the entire exhaust flow reaches the so-called “active” turbocharger. If engine speed increases to the range between 2,200 and 2,700 rpm, the respective second exhaust valve is opened and the second turbocharger is also activated.

In conjunction with the EPC, the 48-volt electrical subsystem also paves the way for incorporation of an electromechanical active roll stabilisation system. Here, a compact electric motor with a three-stage planetary gearbox separates the two halves of the stabiliser. On an uneven road surface, they are actively decoupled from one another, resulting in improved ride comfort, but during faster driving they are interconnected and twisted against each other. With this advanced stability system on board the SQ7 TDI rolls less in bends and the tendency to understeer is kept even better in check, enabling higher lateral acceleration and thus higher cornering speeds.

Sport differential for the first time in Q7

In the interest of agility the sport differential actively controlling torque distribution between the rear wheels can also be specified for the first time in the history of the Q7 in the new SQ7 TDI. All-wheel-steering is also available to promote even greater stability at higher speeds by turning the front and rear wheels in the same direction, and to aid low speed manoeuvrability in urban situations by turning them in opposing directions.

Housing all this technological accomplishment is an accommodating yet outstandingly aerodynamic body with a low 0.34 drag coefficient and the lowest weight in the class, made possible as a result of innovative multimaterial construction blending aluminium and steel in precisely the right proportions and locations. Underpinning it is standard S-specific adaptive air suspension that reacts to the movements of 20-inch alloy wheels and is controllable via the standard Audi Drive Select adaptive dynamics system.

Visual cues to the ranking of the SQ7 TDI include a unique radiator grille design, an aluminium finish for the side air inlets, mirror housings and door inlays, LED headlights with a striking double-arrow light signature and an exhaust system branching into four rectangular tailpipes.

Under the skin, seven comfortable seats across three rows are upholstered in high quality Valcona leather, and the 235 litres of luggage space can be expanded to up to 1,890 litres helped by the standard electrically folding third seat row. Accessibility is also aided by the standard powered tailgate. Occupants enjoy plenty of space as well, along with a generous quota of equipment as befits a model not only bearing the S badge, but also exemplifying Audi technological ingenuity.

The fully digital Audi Virtual Cockpit is one of the many standard features, as is the Audi smartphone interface and MMI Navigation plus with the fingertip-sensitive MMI Touch pad control. Also new to the Q7 range is an embedded SIM card which immediately brings the benefits of Internet-based Audi Connect services to the car at no additional cost and without the need to insert a separate data-only SIM as was previously necessary. Google Earth mapping, Google Street View, news, weather, online traffic, flight and train information as well as local fuel prices and entertainment options are among the features available via the 7-inch MMI monitor and the 12.3-inch Audi Virtual Cockpit display.

Audi Connect infotainment is offered on a three-month trial basis, or is included for three years if the optional Technology Package is specified. This cost-effective package also includes the Audi phonebox for wireless smartphone connection to the car’s antenna and wireless, inductive charging (according to the Qi standard) and a head-up display projecting key information onto the windscreen in the driver’s field of vision.

The Audi connect portfolio also includes a new permanently active element known as Audi Connect safety & service, which also integrates the myCarManager package. Thanks to this feature, help from the emergency or roadside assistance services is always available at the touch of a roof lining-mounted button (or automatically in the unfortunate event of a more serious incident), and via myCarManager customers can use their smartphone, in conjunction with the Audi MMI app, to precisely locate their car, lock and unlock it or check if the lights have inadvertently been left on.

Among the more indulgent options available for the new SQ7 TDI are alloy wheels of up to 22 inches in diameter, Matrix LED headlamps capable of diverting their beam around oncoming and leading traffic, S Sport seats plus with contrasting diamond stitching and two optional ‘3D’ surround sound systems from Bose and Bang & Olufsen, the latter offering up to 1,920 watts of music power.

From a more safety and efficiency-conscious perspective, customers can choose from a wide range of 24 optional driver assistance systems. The predictive efficiency assistant, for example, provides additional information in the instrument cluster to help the driver save fuel, while adaptive cruise control with traffic jam assist relieves the driver in slow-moving traffic on well-surfaced roads with clearly defined markings by taking over the steering in many situations.