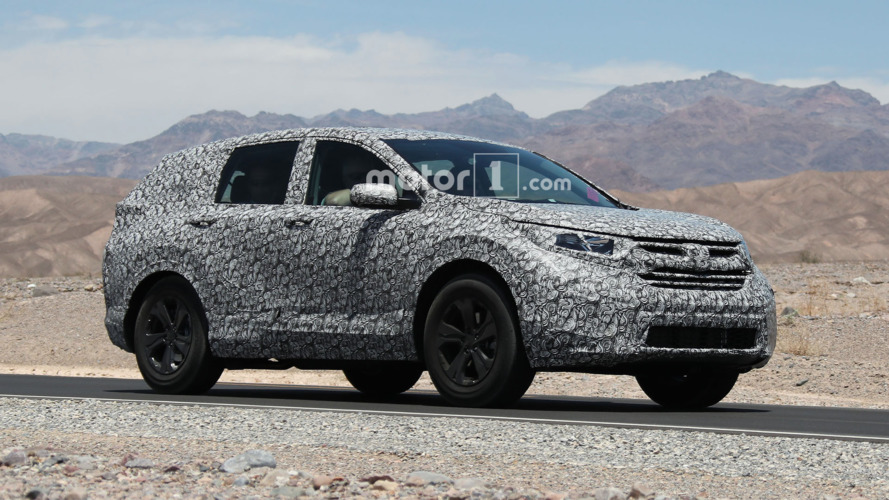 The larger model should be more spacious inside, which could allow for a seven-seat model.

The Honda CR-V is among the automaker’s bestselling models in the United States, and it’s now roughly a year away from getting major upgrades. There might even be a turbocharged engine under the hood. Ignore the Ohio license plate on this once because this fresh batch of spy photos shows the CUV conducting hot-weather testing in the Mojave Desert.

The future CR-V reportedly grows larger than the current one and appears to take styling cues from recent Honda vehicles. For example, the LED headlights and L-shaped taillights here are reminiscent of the designs for the latest Civic. The grille’s thick crossbar and narrower slats evokes the HR-V compact crossover, too. The new design also features muscular shoulders. This one has a slightly lower front fascia, rather than the dual exposed tailpipes in previous spy photos. Inside, extra space could allow for versions with five and seven seats.

Honda might add its 1.5-liter turbocharged four-cylinder to the CR-V's powertrain lineup. In the latest Civic, this mill makes 174 horsepower (129 kilowatts) and 162 pound-feet (219 Newton-meters). That’s less than the crossover's current 2.3-liter four-cylinder with 185 hp (138 kW) and 181 lb-ft (245.4 Nm), but the new powerplant should be more efficient. A hybrid could join the range, too. On base models, a CVT would route power to the front wheels, but all-wheel drive would be optional.

The new CR-V will go on sale in the U.S in the second half of 2017. We expect it to debut at an auto show early in the year.